Up in the Air Visiting Thale, Germany 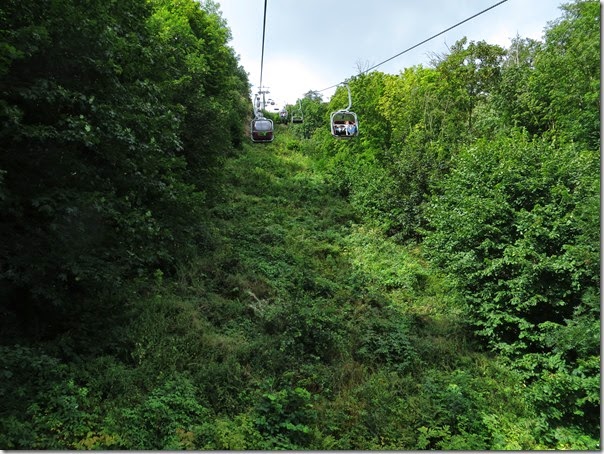 Today we were off to visit the Harz Mountain town of Thale. it is situated in a valley that has a sesselbahn to the top of mountain on one side of the valley and a gondola to the top of the other side. When I first proposed visiting Thale with Linda, I mentioned it was famous for the Hexentanzplatz i.e., the Witches' Dancefloor, Walpurgis Night and other long ago pagan happenings. The result was she was excited about going. Then I mentioned how these places were all on top of a mountain and she was no longer excited. Having saved my best card for last, I mentioned the words chairlift and gondola to the top and she once again glowed with excitement. Crafty Bob. 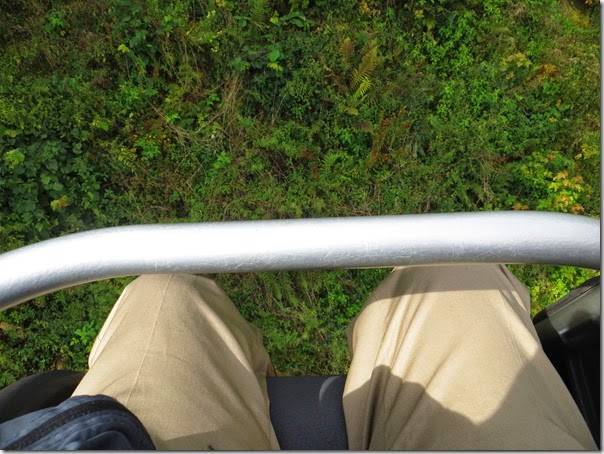 On the way to the top I was really enjoying myself. The views were awesome. I even took one looking done at the mountainside. 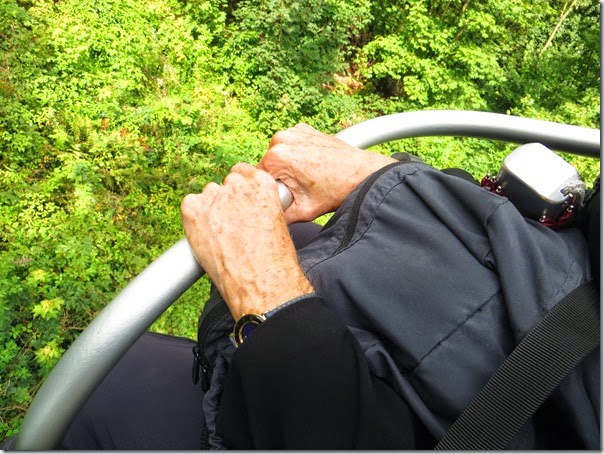 Linda on the other hand wasn’t having the scenic relaxed ride I was. Please note the white knuckle death grip on the safety bar. And here I thought being one of those Appalachian hill girls she would have a great time going up the mountain. 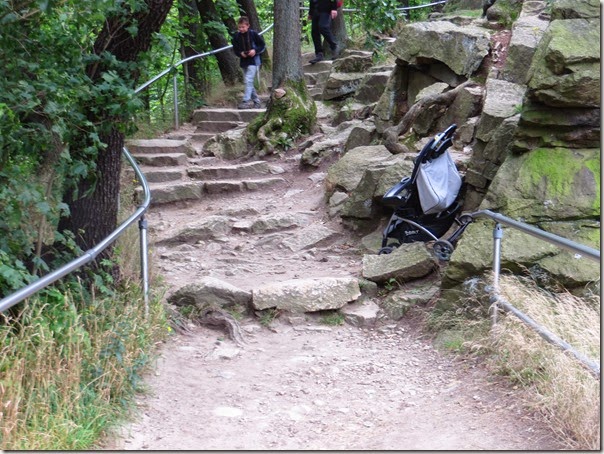 Part of the trail to the overlook areas for the valley. It reminded us of the things the pioneers discarded along the Oregon trail. In this case we could not believe anyone had managed to get a baby stroller this far along the trail. What you see of the trail is practically flat compared to what came before. Not long before this point we saw a person in a wheelchair. It bespoke volumes of the difference between the way Europeans approach things and way Americans do. 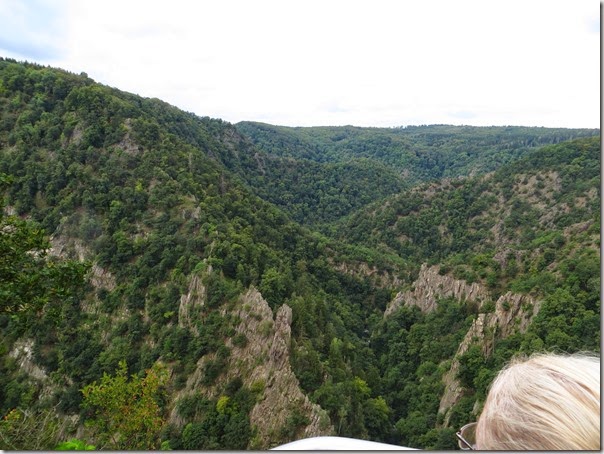 Simply put, I take crappy photos at times and this was one of them. The view of the gorge was awesome for this part of Germany, but it was more like the American east and not the American west. Still we had a great time, as did the German tourists we met on the trail. The best part was that not once during our time there did we hear any English being spoken. Like Linda said, with a few words of German and much pointing I was able to communicate pretty well to get us tickets and food. Multi-ambidextrously- lingual Bob. 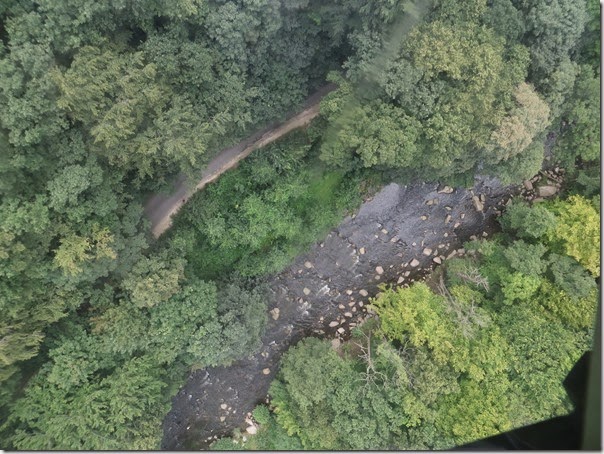 A photo looking down during our gondola ride up the other mountain. 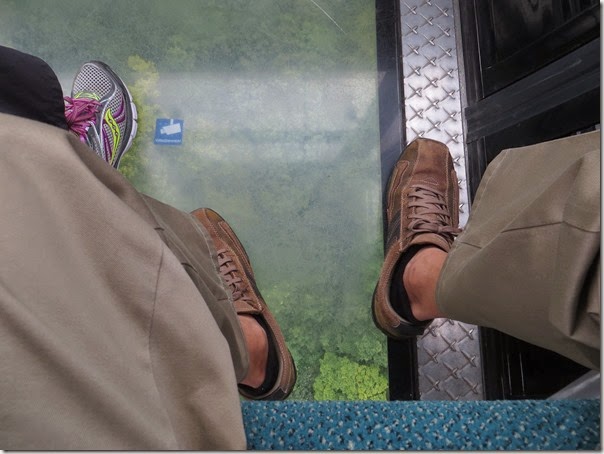 The spot between my heels where I took the previous photo. Linda had a much better time traveling in the gondola, as long as she didn’t look at the floor. Safe and Secure Linda. 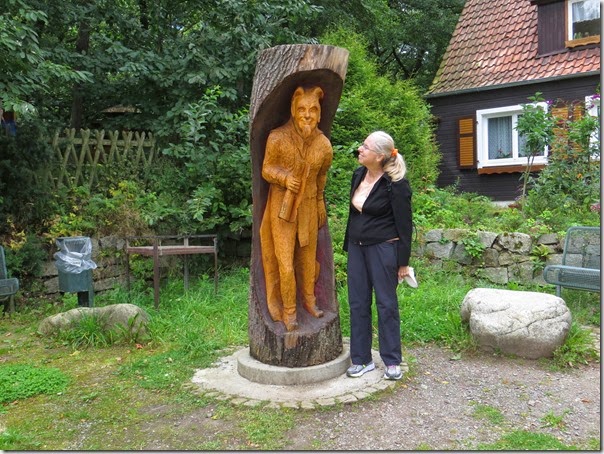 Having teased Linda so much about the chairlift and gondola rides, It looked like she might be thinking a replacement for me. 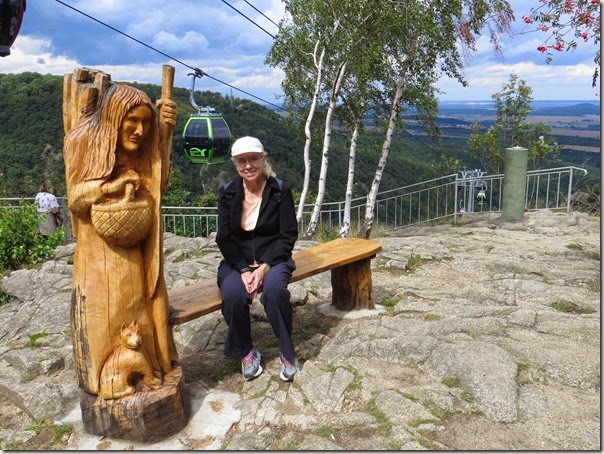 However I able to show that because we up at the Hexentanzplatz  (the dance place of the witches) this was what she would turn into if were she to cast me aside. (Hill girls are easy, but don’t let her know that, hee, hee.) 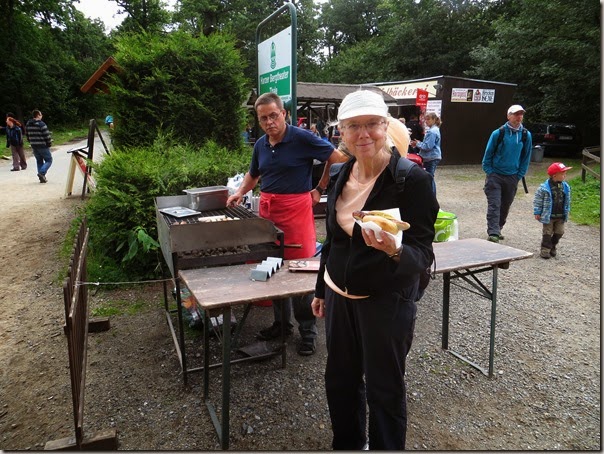 When you are where the German’s tourist, it is easy to eat like a German tourist. Linda with her Thuringer wurst und brotchen mit senf. Think hotdog in a bun with mustard. Of course that is like comparing a filet mignon to a MacDonald’s hamburger, but that is why we travel, so we can enjoy the good things in Life. And if you have been here you what I am talking about. 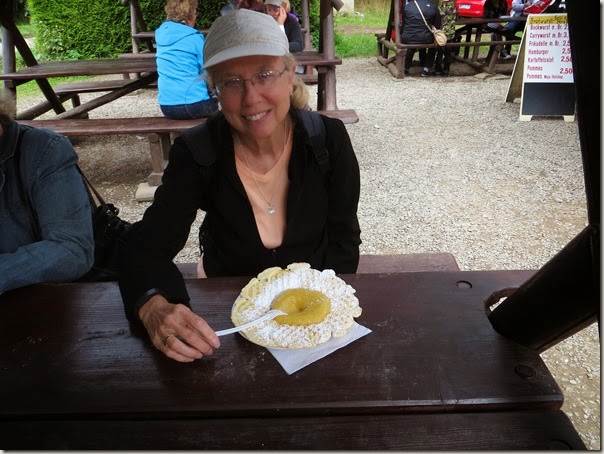 The lady sitting next to Linda was eating a waffle with applesauce and powdered sugar. Linda leaned towards me and said she wanted the same thing. Lucky for her my command of German is so good. Lucky for me the girl behind the counter understood what passes for my German as she spoke no English. Thankful Linda. 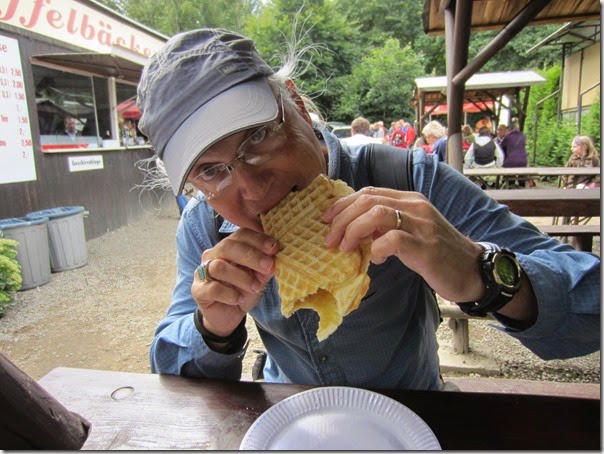 We shared the waffle and from the look on the face of the lady sitting next to Linda I gathered that sharing the way we were was not very common. And I thought with my German language skills and Linda’s Teutonic looks we could easily pass for a German couple on holiday. Depressed Bob. 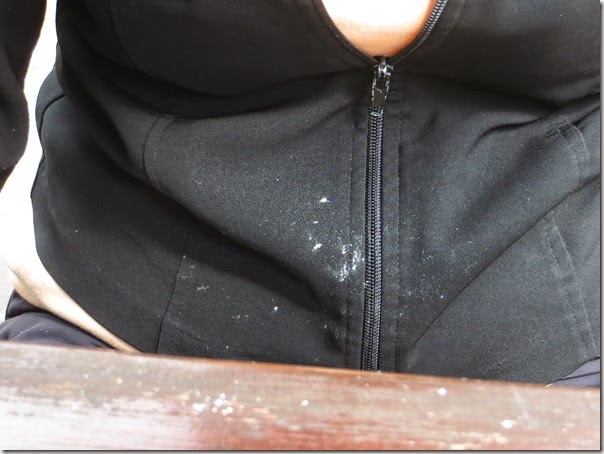 I told Linda she would spill some of the powdered sugar on herself. She was sure she wouldn’t and went so far as to place her napkin such that it would catch and sugar that might drop. It did exactly that, catching all her dropped sugar. What she didn’t anticipate was that the wind would blow the sugar laden napkin onto her. Sheepish Linda. 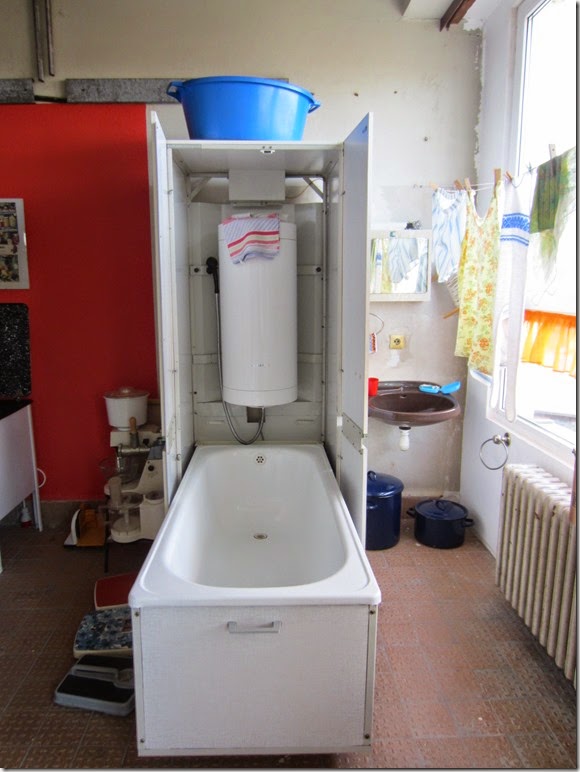 We ended out time in Thale with a visit to the DDR museum which is on the top floor of a building that you have to want to find. Life in the DDR (East Germany) was different to say the least. They had water heaters and bathtubs. The also had such small apartments that the bathtub had to be be put away in a cabinet with the water heater when not in use. Looks like it might not have been the workers paradise it was made out to be. 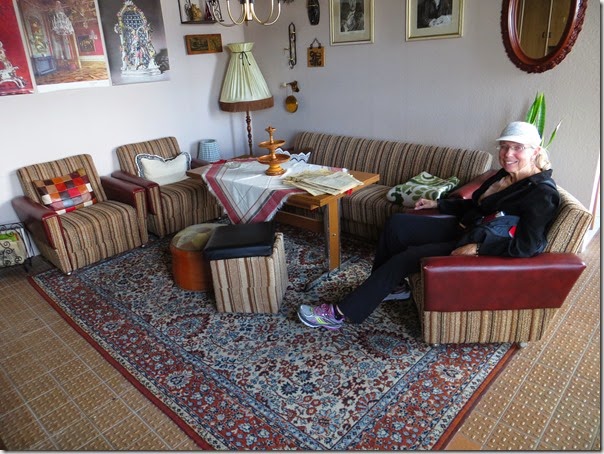 Linda pretending to be a little old East German lady sitting in her apartment. Pretending being the operative word as have never ever called her little or old. Or a lady for that matter. Precise Bob. 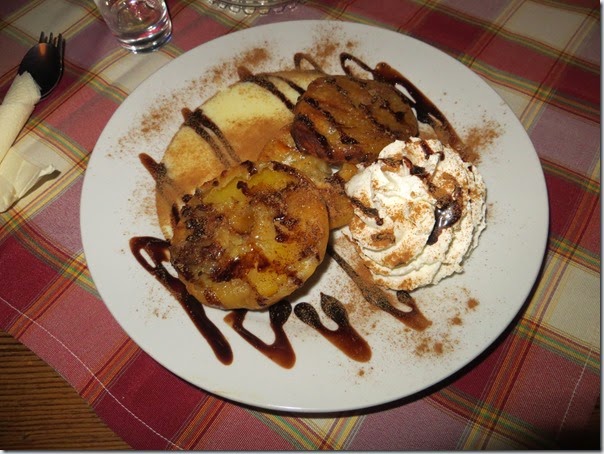