Across the Arctic Circle 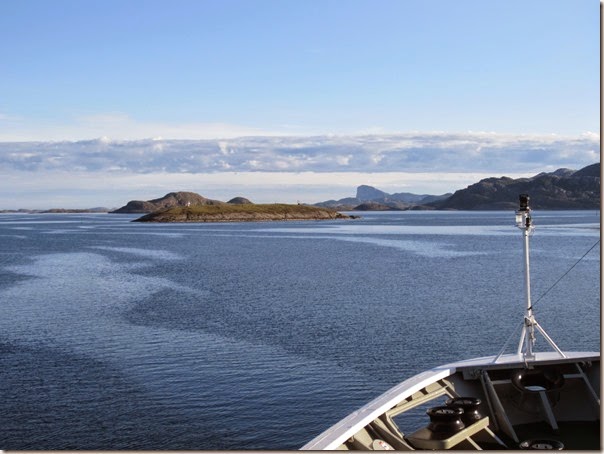 It was a glorious, clear, crisp morning and Linda was up early, eagerly looking to the north in anticipation of our crossing the Arctic Circle. 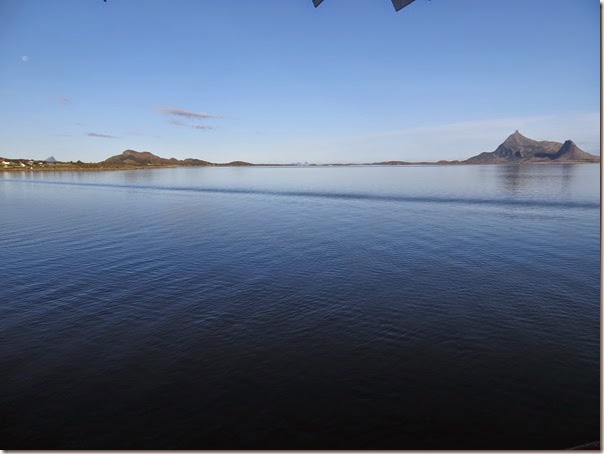 As readers know, this is where you get to discover the things you never knew existed, which unfortunately doesn’t include how to understand women but that is something for another time because today all eyes were casting about for traces of that well known but ever elusive Arctic Circle. Luckily I was sharp enough to see it as the ship bore down on it and now present you with evidence of its actual existence which you can see in this photo. Eagle Eyed Bob. 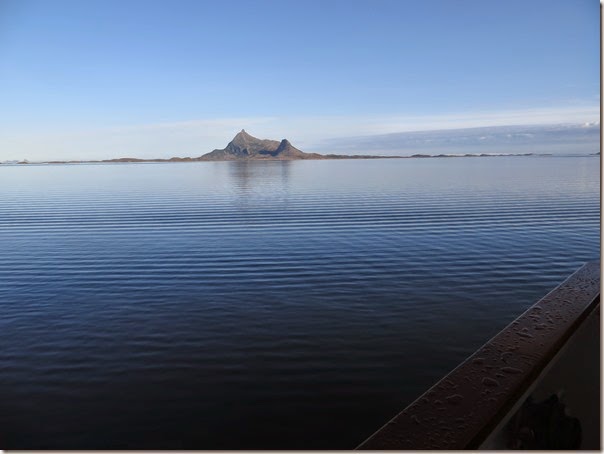 Another photo of the line of the Arctic Circle taken just before we crossed it. Talk about something awesome, not even Mark Twain was able to write about this. Bragging Bob. 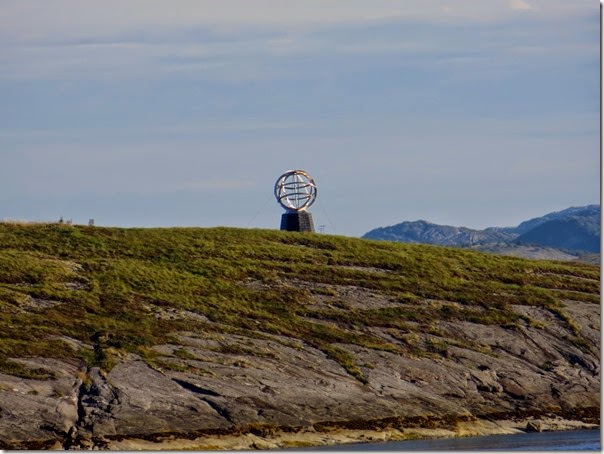 A marker for the circle on a small island which everyone on the ship was trying to take a photo of. 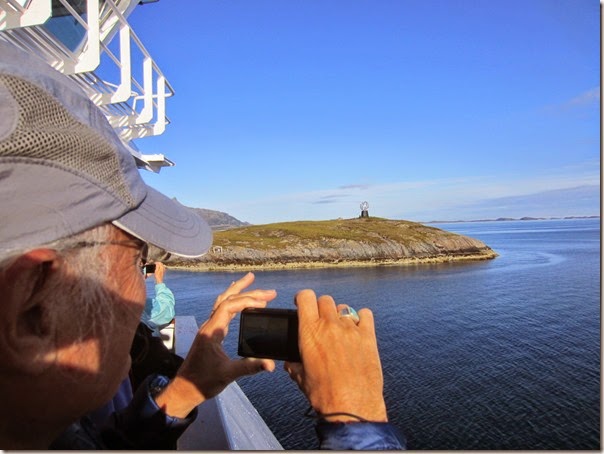 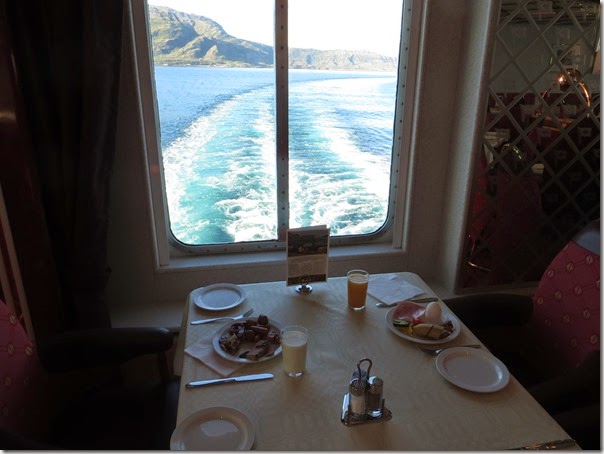 Open seating for breakfast and we still managed to snag a window table at the stern, which is Linda’s favorite place to sit. A nice couple from Germany joined us and there was a lively conservation at the table. Unfortunately it was between them and Linda as I had forgotten to put in my hearing aids this morning as Linda rushed me out of our cabin to see the Arctic Circle. My first chance to talk to someone I German and I can’t hear a word they are saying. Sad Bob. 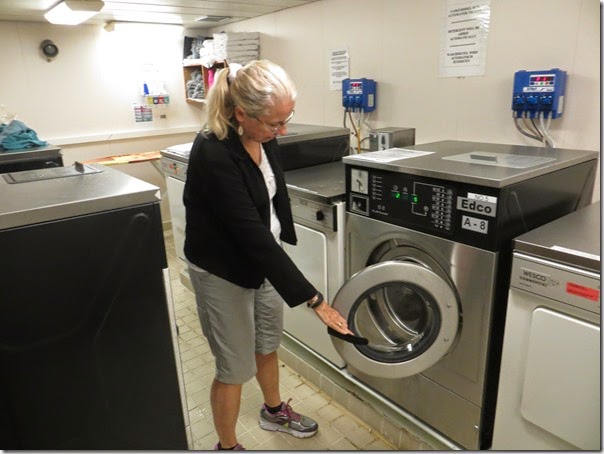 There are washers and dryers on board and this morning Linda put them to use. Funny thing about that though, or maybe I should call it the Revenge of the Linda, somehow or other she talked me out of my pants and shorts so she could wash them which meant I had to sit in cabin in my you know what for the hour it took her to wash and dry all my clothes. Silver Tongued Linda. Embarrassed Bob. 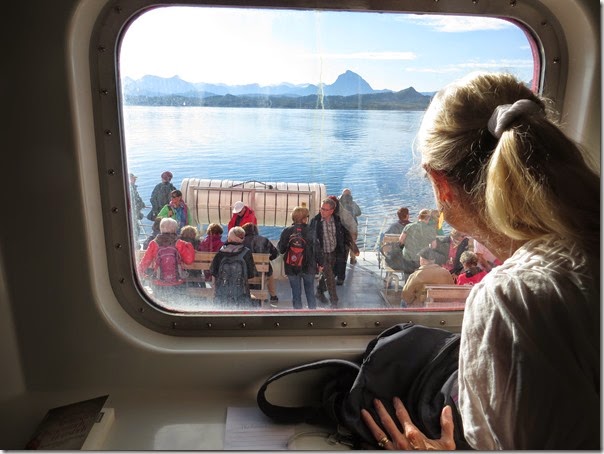 Miss Snoops Alot got her eyes full of the action when a small boat pulled along our ship right below our cabin window and a group of day trippers departed on the glacier trek. 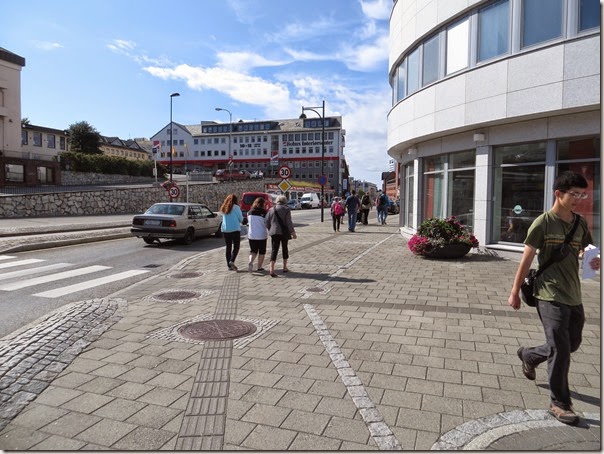 We did the same thing later in the day, though it was on dry land to visit the town of Boro. Linda was concerned about how we would find our way into town. That is where my high degree of intellect came into play. We just let the masses exit the ship, then followed them into the town. No wonder Linda is always smiling at me, I have to be one of the most brilliant people there is. Humble Bob. 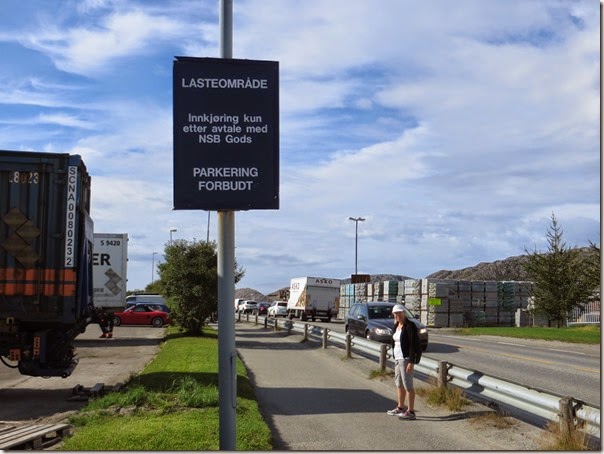 Linda asked me if I knew what this sign said. Calling upon my knowledge of the various Norwegian dialects, I told her it says: Last Chance. Beyond this lies only the land of the gods. Please turn back.

I thought it was an excellent translation. She just laughed and kept walking. I guess I need to spend more time studying my Norwegian dictionary. 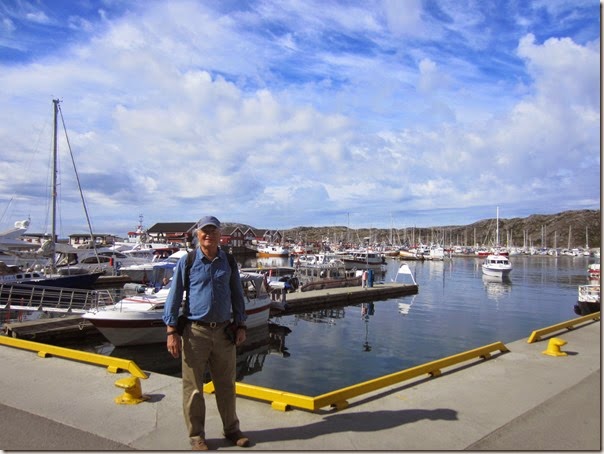 I was ordered to stand still so she who orders me around could take my picture. Have to love the forest of masts in every town along the coast. During our recent tour our guide, Ulva, had joked that everyone in Norway owns a boat. For all I know it is true given how many boats we see. 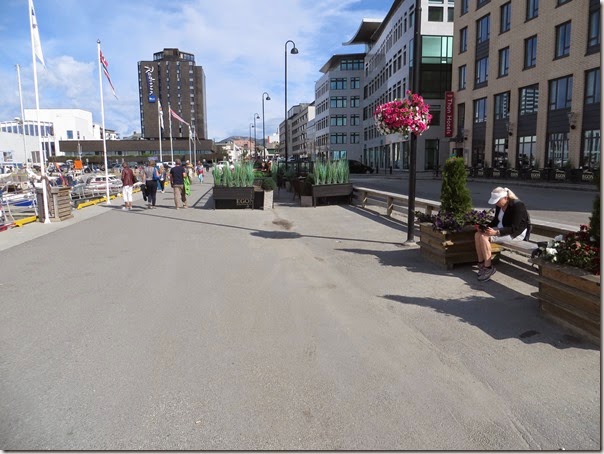 A note to readers, We have not been able to send or receive any emails since we boarded the boat though we have been able to post the blog and the daily facebook photo. We managed to download our emails for some of our accounts using the marina’s free wi-fi, but didn’t have time to answer any of them. It is looking like it will be after we are off the boat, either on Saturday or Sunday before you will hear from us. Sorry for the inconvenience, but we are working on solving the problem. Or at least that is what the phone, satellite or cable companies always say when we have problem, so if billion dollar companies can use that line, so can Bob and Linda. 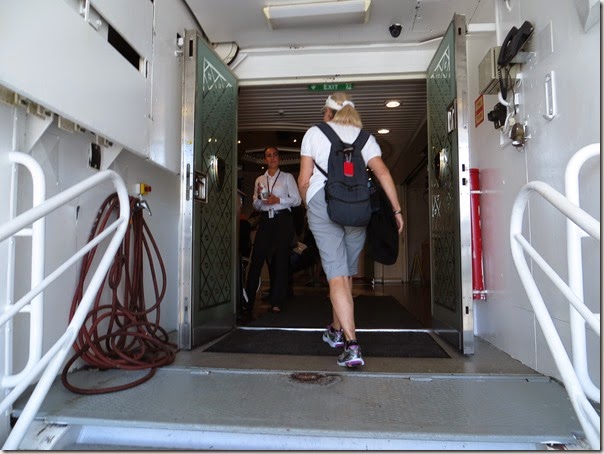 Tired day tripper returning to the ship. To the eagle eyed among you – This is not an illegal butt shot. Note the aforementioned part of the subject of the photo is covered by a daypack. Precise Bob. 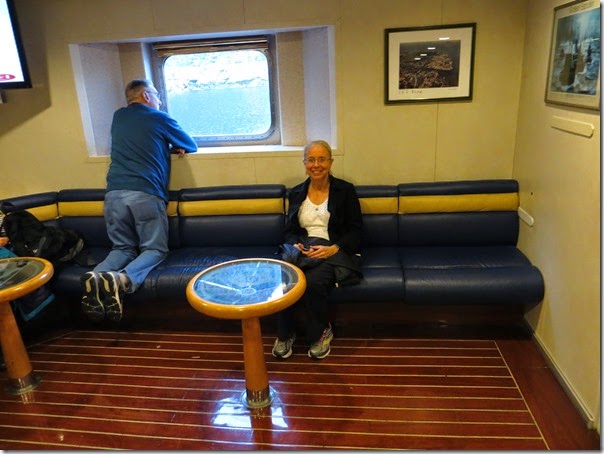 Night tripper ready to depart for the Viking Feast. If she looks happy there is a reason. She had been concerned that she wouldn’t be able to see everything at the Viking Feast, however during the nap she took after returning from our early afternoon shore excursion she was able to level most of the forests in a hundred kilometer radius around where were are, so seeing things will be no problem. Lumberjack Linda. 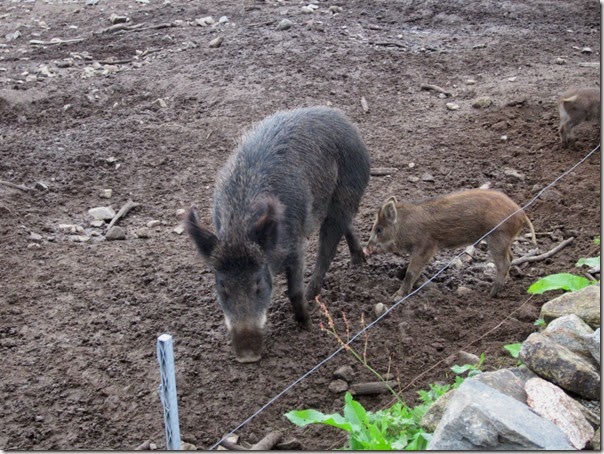 I know we were going to a Viking Feast, but when I download the photos from Linda’s camera I never know what is going to show up. Maybe these are some of the lambs waiting to be slaughtered for a future feast. You can take the hill girl out of the hills but you can’t take the hills out of the girl. Baaaaad Bob. 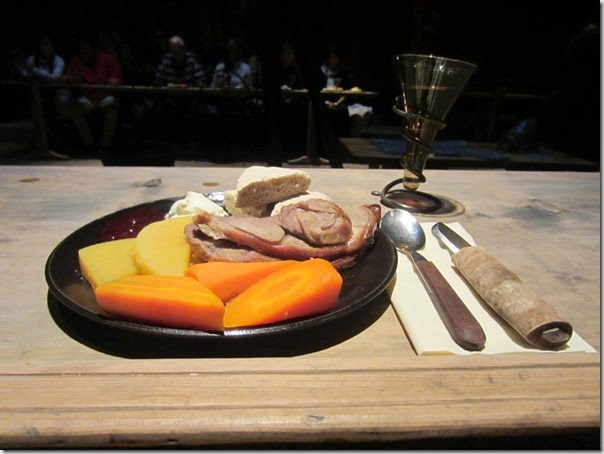 Linda’s Viking Feast. She was saying: Lamb, why did it have to be lamb until she took her first bite. Then I had to almost fight her to get some the lamb slices on her plate. Linda, A True Viking. 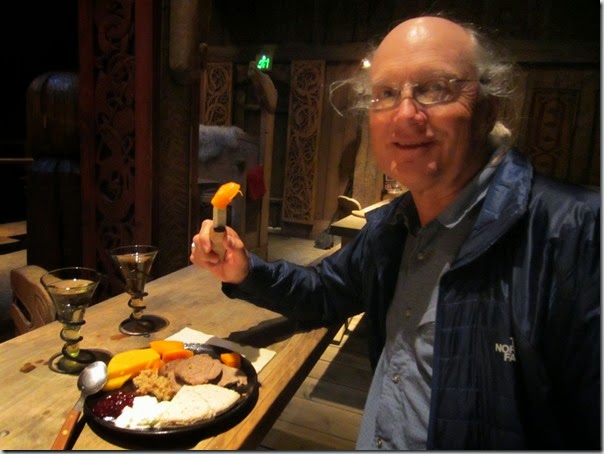 Eating the Viking way, with knife and fingers. 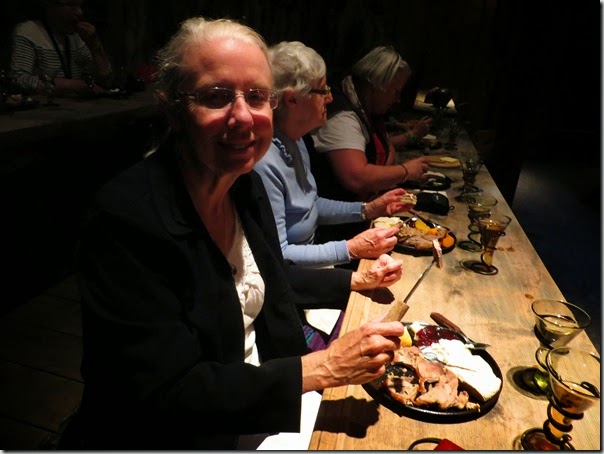 I wasn’t the only one eating in the manner of Linda’s forbearers. She of Viking Blood was quick to take up the knife and hack her way thru her food. 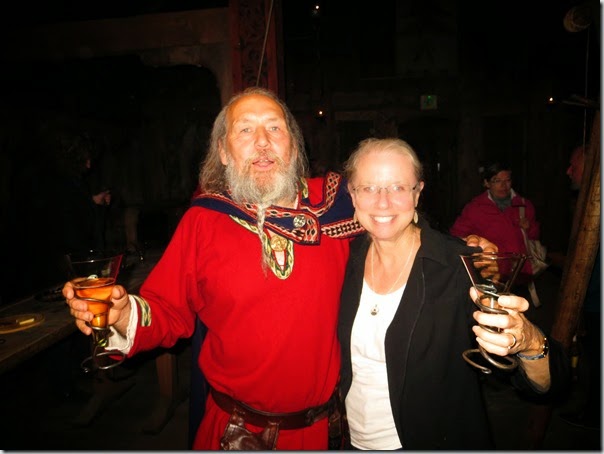 Viking Chief and Viking Woman hoist their glasses of mead and toast the gods for good pillage and plunder on their next raid. Skoal! 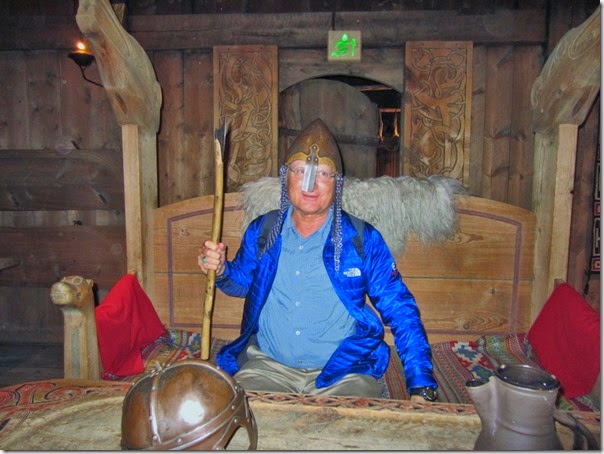 Some people should never dress up and pretend to be a Viking. This is one of them. 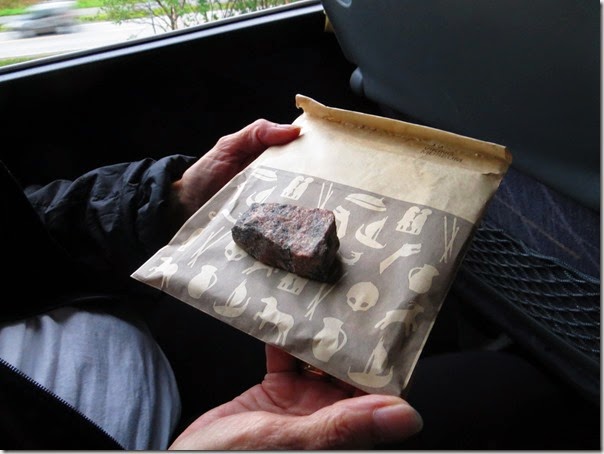 I’ll end with a photo of the rock Linda just had to pick up as we left the Viking Feast. Sure it was hookie, but we had a wonderful time. We got to act like Vikings. We got to dance around the fire. We got to Live Life for a few hours. There is no price on the worth of those memories. Remember: Life is not a dress rehearsal. You have to go for it now. There is no second chance.