Into the Mountains of Norway 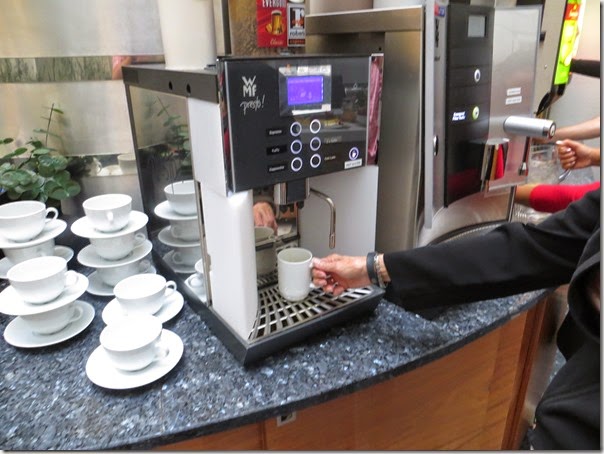 Wondering whether Linda would be coffee machine challenged again today, I accompanied her on her early morning cup filling task. I can report that all was well with two shots of espresso being dispensed into her cup. Happy Linda. 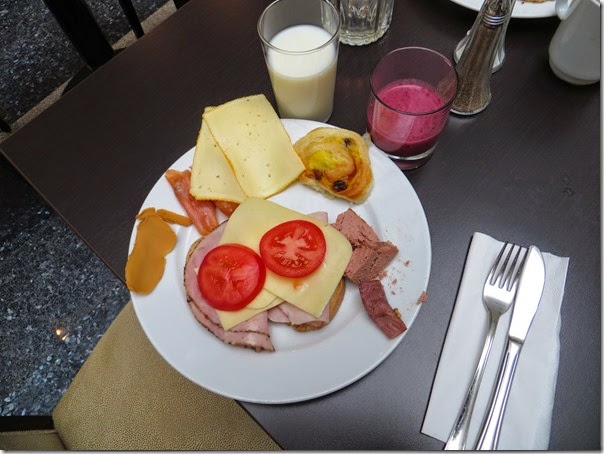 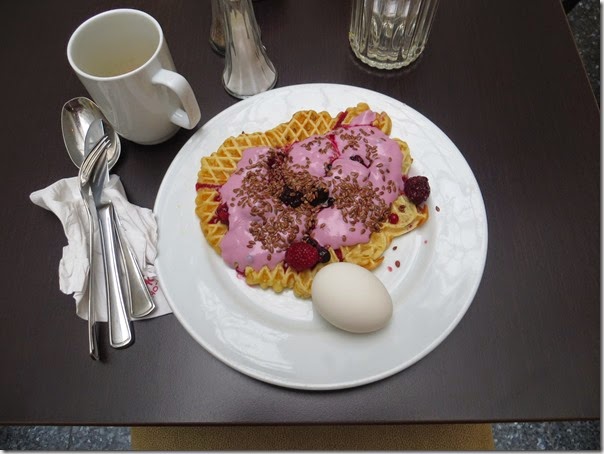 A waffle/pancake with fresh berries, yogurt and bird seed, with hard boiled egg on the side. It’s what Linda calls breakfast and I am glad she likes it because it isn’t what I would call breakfast. No liverwurst and pickled herring? Then it isn’t breakfast. Epicure Bob. 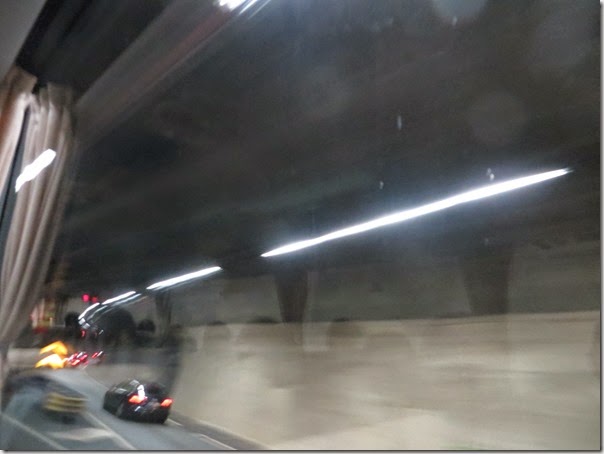 It’s photos like this that set the standard in blog images. For those few readers that may not understand what it shows, it is my method of illustrating the fact that in Oslo they have an air removal system that cleans and purifies the air in the vehicle tunnels before it is returned to the atmosphere. 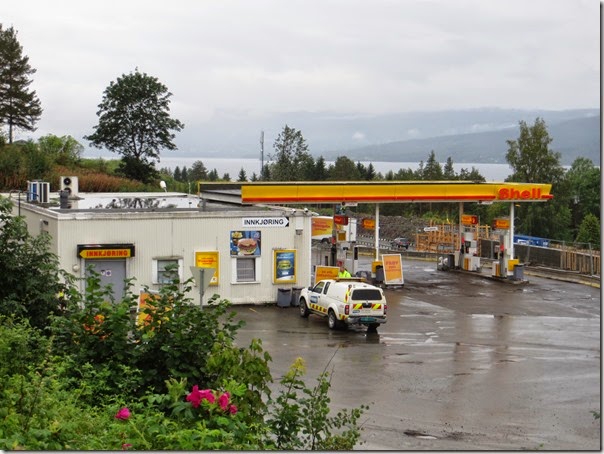 Once again we break new ground in travel writing by showing you the Shell Station in Espa, Norway. Though you might ask for what reason. 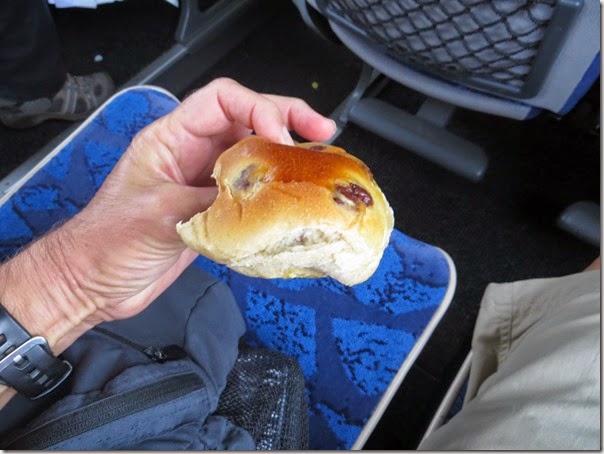 This is why, and no, it isn’t a snake head. This station sells more buns than any other place in Norway. Travel gives a person knowledge they couldn’t acquire in any other way. 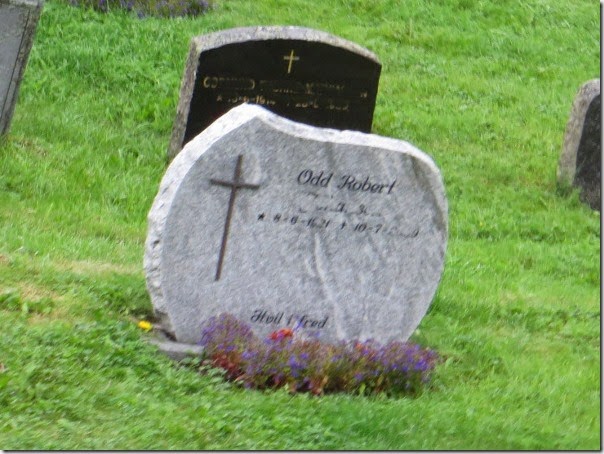 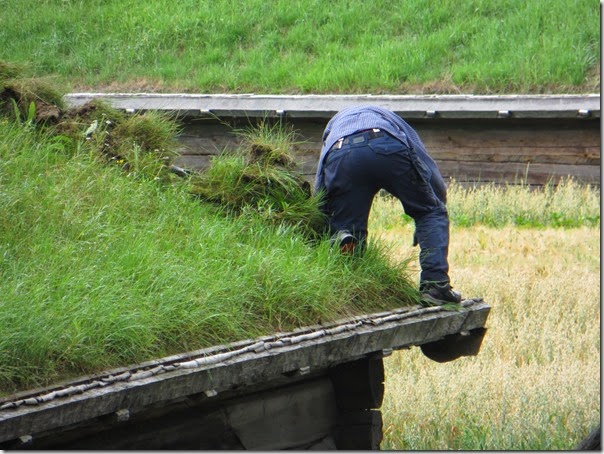 One of the places the tour stopped today was at an open air museum exhibiting buildings from all over Norway. The grass roofs were something we had not seen before and we were lucky to be able to see one being repaired.

A note about this photo. As long time readers know I have been banned by she who runs our family from posting what is fondly referred to as “butt shots.” New readers may not know the background of said ban, but understand I sure don’t want to ever face that degree of wrath again. By way of partial explanation, while the above photo shows said anatomical structure, it is not a “butt shot” because a certain part of a certain person is not displayed. 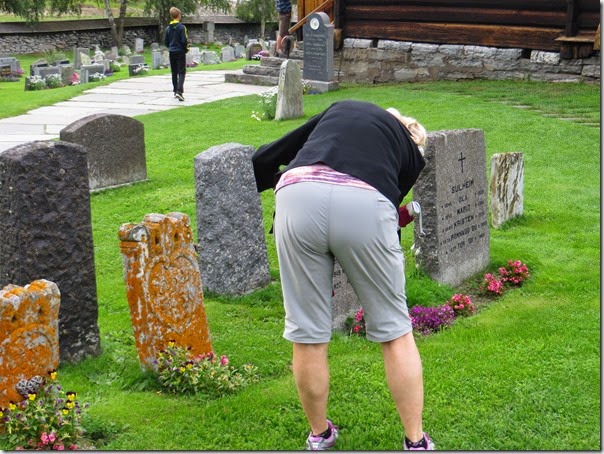 For the sole purpose of educating any new readers, and no other purpose, I post this photo of the above referred to body part, pointing out that this is what is referred to as the infamous “butt shot.” Educator Bob. 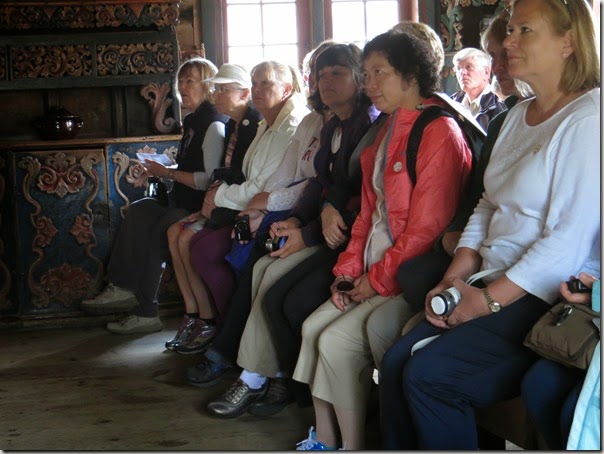 The docents at the open air museum were great as this attentive group of ladies shows. 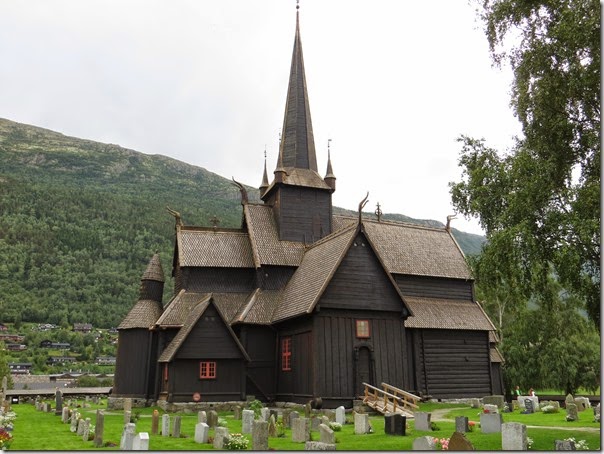 One of only several dozen stave churches remaining in Norway. The central portion of the church dates to the 9th century. What makes these church’s special is they are of wood construction and the existing churches elsewhere in the world from that long ago are of stone or brick construction. 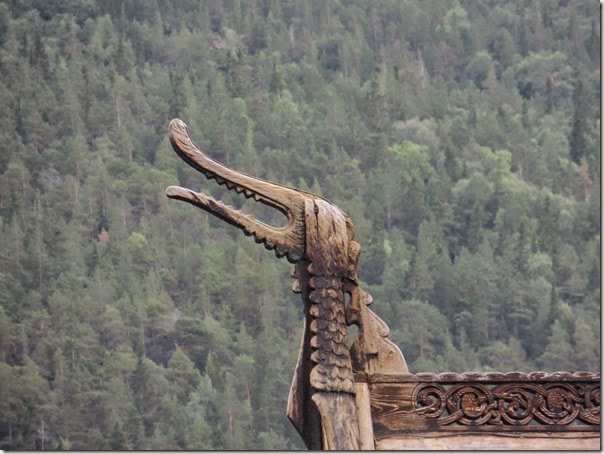 A dragon head on the outside of the church. It was built at the time the people were first being converted to Christianity, so the monks allowed the people to place this pagan symbol to ward off any evil spirits that might attack the church. 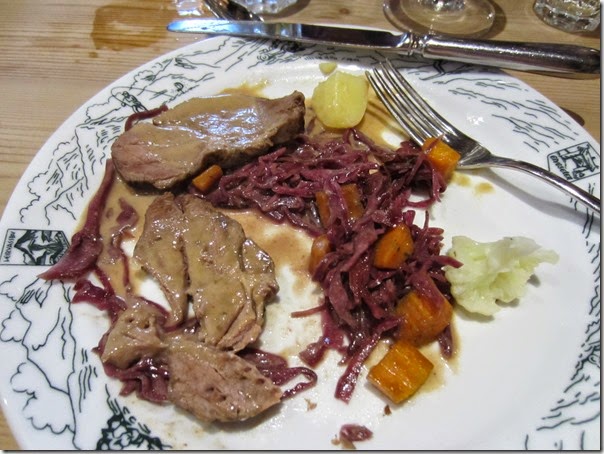 Linda’s dinner. it was only after the meal was over that she learned the meat was wild boar, and that was after she told me she like the meal. That woman has come so far in her eating habits it is unbelievable. Amazing Linda. 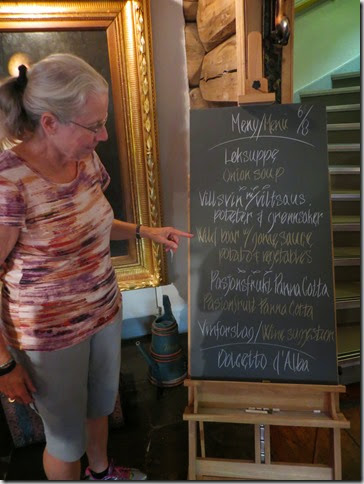 Linda pointing out that, yes indeed, she ate and enjoyed wild boar. I told her to look at it as practice for next week’s meals on board the ship. She just smiled at me.