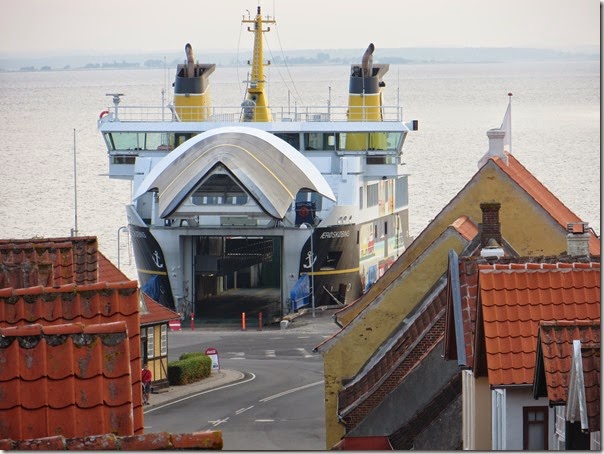 The ferry at the dock early this morning looked somewhat like a giant shark with its mouth open wide. At this hour the streets are deserted and no sounds waft up to our room from the cobblestones of the street below. 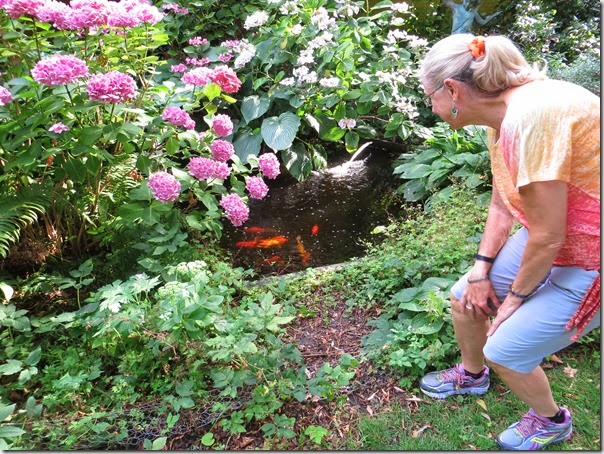 There is a large peaceful garden area behind our B&B. Hearing the noise of running water, we discovered a koi pond. 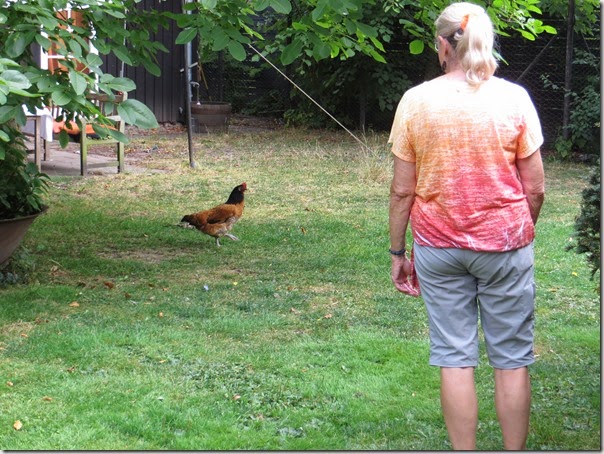 A minute or two later and Linda was in 7th heaven. She definitely got her chicken fix. 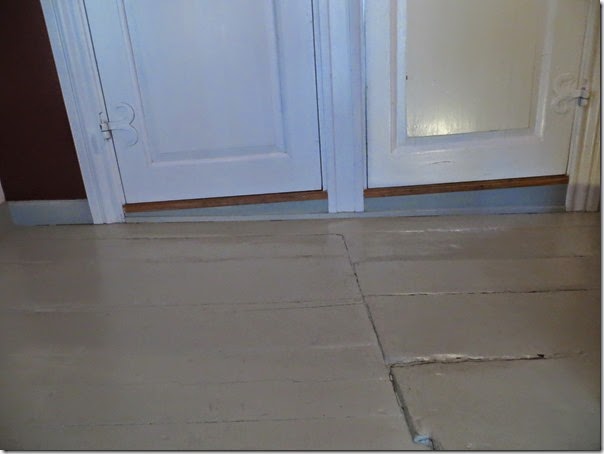 I kept telling Linda it seemed like I was almost off balance in our room. From the slope require to square up the doors it looks like I knew what I was talking about. Of course now that I know that really does slope it no longer bothers me. 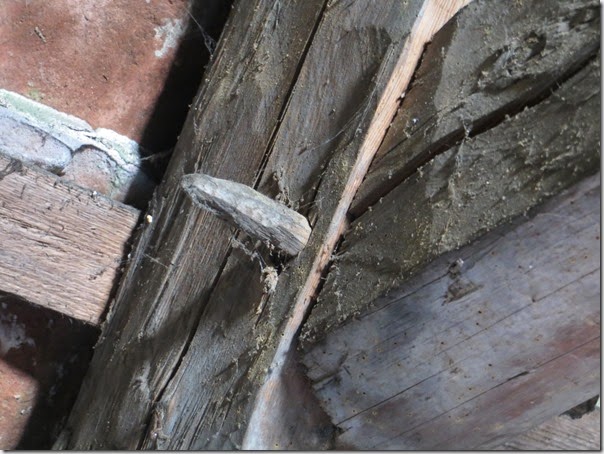 It was also interesting to discover that all the huge beams holding up the roof that we can see exposed in the large sitting area outside our room are held together with wooden pegs. 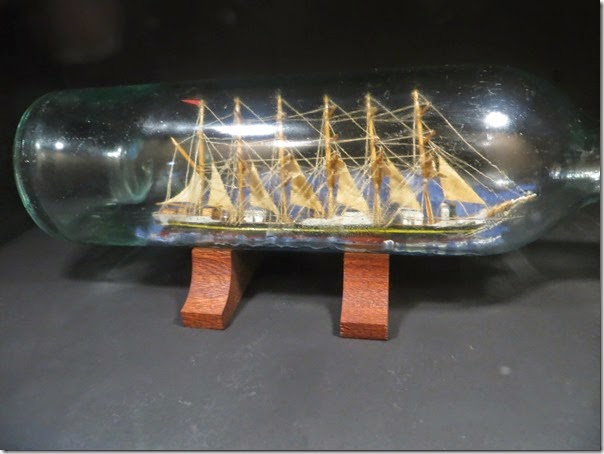 No visit to Aero is complete without a visit to the Peter Ship in a Bottle Museum. It’s not everyday you get to view the world’s largest collection of ship’s in a bottle. And I have to say that even after seeing dozens and dozens of ship’s in a bottle, if you’ve seen one ship in a bottle, you haven’t seen them all. This man was a true master of his craft. Impressed Bob. 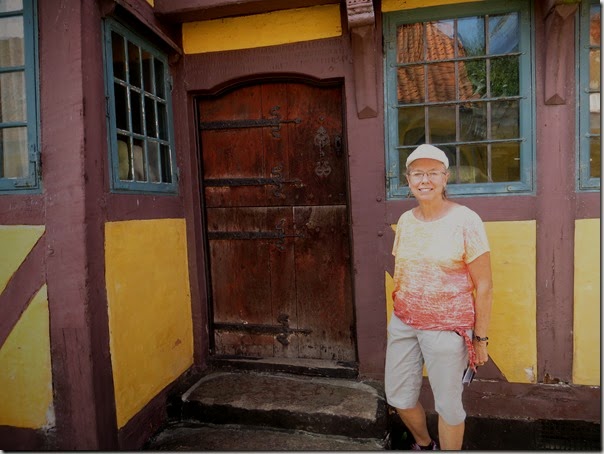 There was a house in town that was supposed to have the original paint on its door dating from the late 1600’s. We found the street, then the fun began. Linda had her idea of where it might be and I had mine. It took a while but I finally convinced her which direction we should walk. Then we discovered the house numbers on the two sides of the street were completely out of sync. Luckily I finally found the door and was able to get her attention from where she was, way down the street. I could tell from the look in her eye as she approached me that if this wasn’t the place, there was going to be red on the street where I was standing that would match the red on the door. The red of the old door was ox blood, the new one on the street would be my blood. The photo shows all ended well. Sharp eyed Bob. 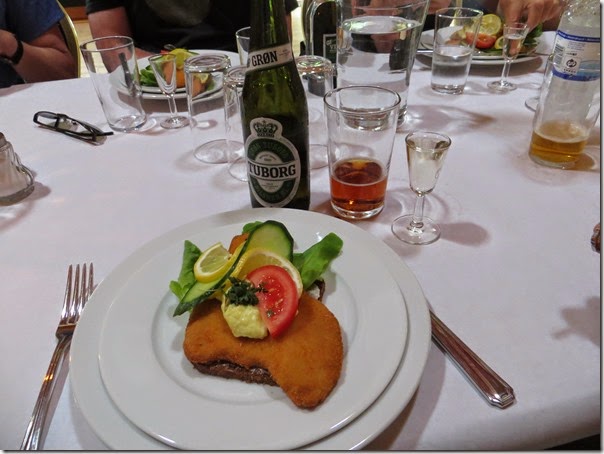 Open faced fish sandwich followed by a roast beef one for lunch which is called smorbrod. A bottle of Tuborg, a glass of local brewed beer and a glass of aquavit. They called this a typical Danish Smorbrot lunch. Makes you wonder how the Danes manage to get any work done in the afternoon. Photo by Linda. 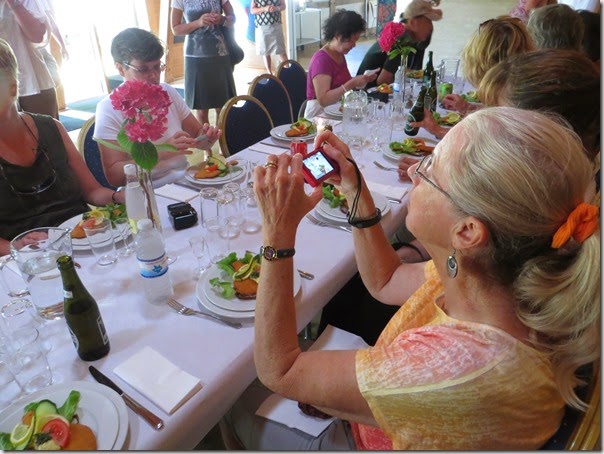 I had tried to take a photo of Linda’s food but as you can see there was someone else taking photos at the same time. I don’t think there is ever a meal we eat that she doesn’t take photos. I read once on a travel forum that you can always tell the Americans in a restaurant because they are the ones taking photos of their food. I guess Linda is a true red blooded all American girl. 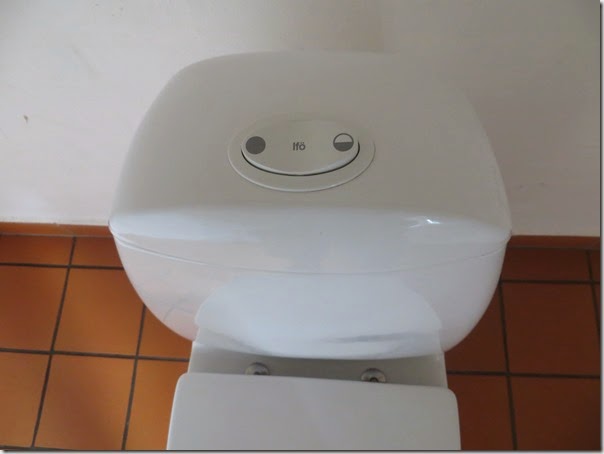 No this is not a smiley face on the top of a toilet. It just shows how further advanced Europe is when it comes to water conservation. Half circle, a half flush for a no. 1, full circle a full flush for a no. 2. Obviously that would be too difficult for the average American to grasp. Either that or because it wasn’t put in the Constitution by the founding fathers it can’t be done. Take your pick. 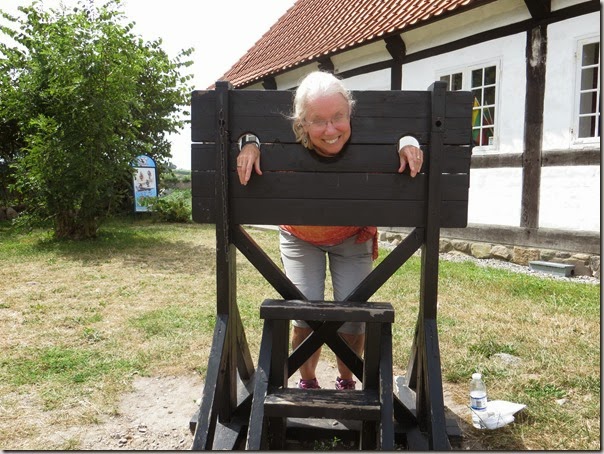 Looks like that old saying, what goes around comes around, came true. With the help of others I was able to subdue the wild Viking woman of yesterday and incarcerate her in the castle stocks. Wonder where I could put one of these in the coach? 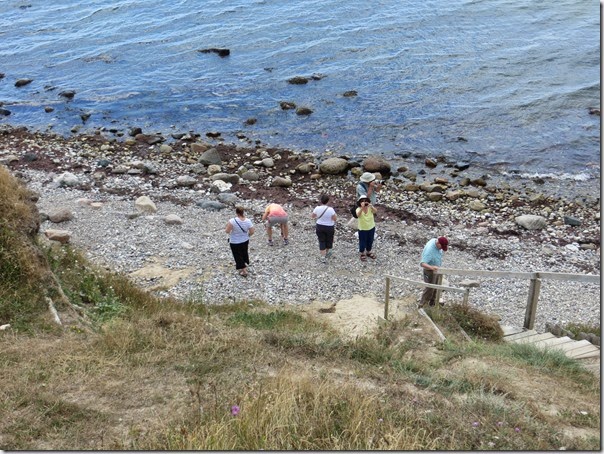 A stop at a beach known for its flint deposits. You can see who the real rockhound is. Don’t think that is one of those banned butt shots. At least I hope it isn’t because if it is I am going to be in very big trouble. Nervous Bob. 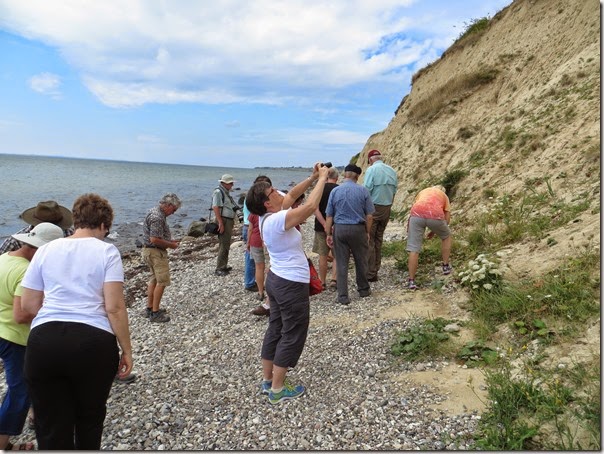 Another view of the group’s foremost rockhound. What can I say, if the first one is going to get me trouble showing another one isn’t going to matter. 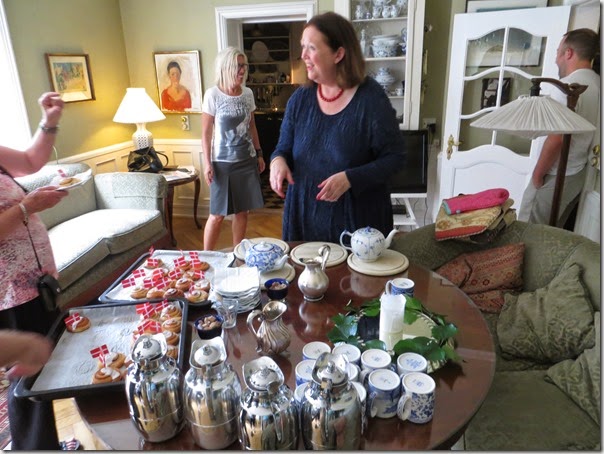 In the afternoon we enjoyed a wonderful 4 o’clock tea where the owner of the B&B answered all our questions about what makes Denmark and also this island so wonderful. She came here with her husband 40 years ago and has never left. Oh, and she was born, raised and living in England at the time, hence the traditional English tea with the Danish pastries. 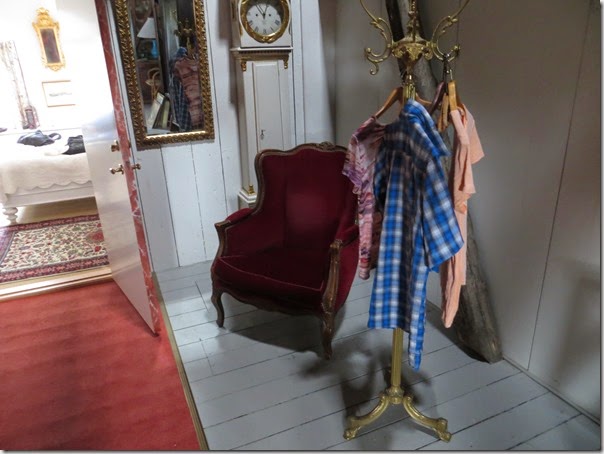 Linda did laundry today and I was urged in no uncertain terms to include the method she found for drying the shirts in today’s post. Good Bob. 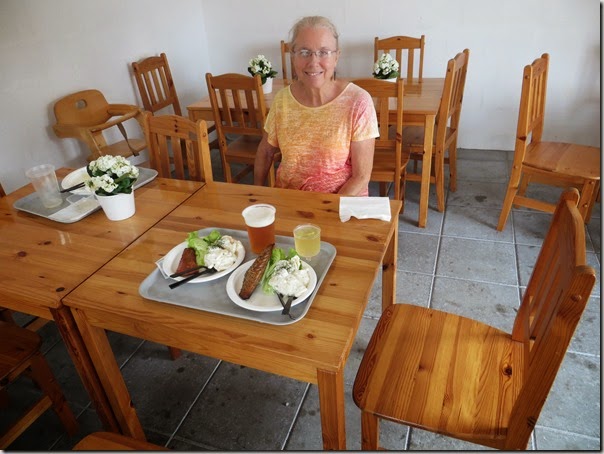 We had garlic smoked fish, mackerel for me, salmon for Linda, with potato salad for dinner. It was a little place down near the harbor where everything was in Danish and we never heard a word of English while there except when we ordered. That is our kind of place. 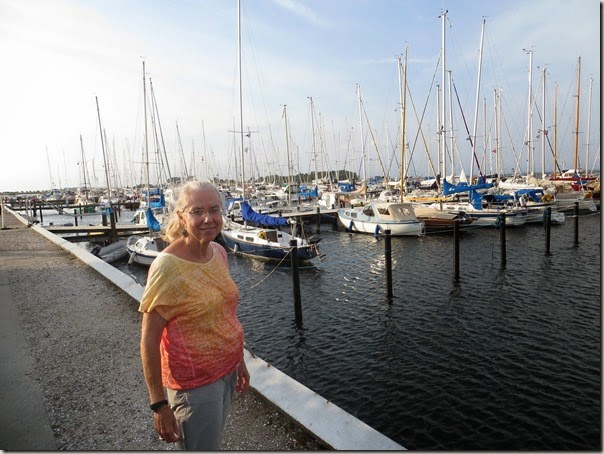 After dinner we took a walk over to the marina. Actually there was no over to it as the marina is all along the waterfront. Lucky me I spied this beautiful woman along the way. 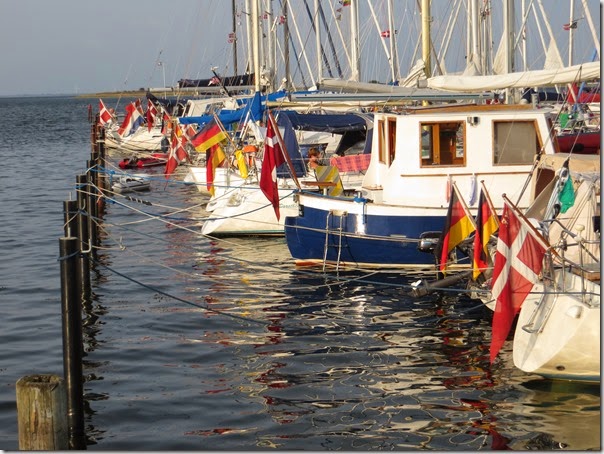 Danish (white cross on red background) and German f(Black, red and yellow) flags with a Dutch (red, white and blue) flag thrown in for good measure. 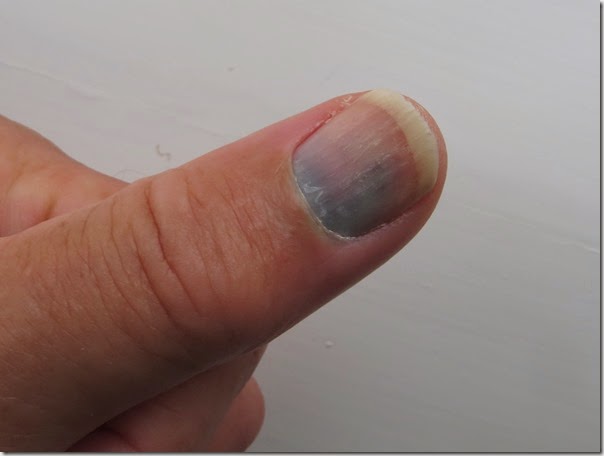 Speaking of blue. While we were at the flint beach I attempted to break off a fresh piece of flint from a large chunk I was holding in my hand by striking it with a cobble. Unfortunately my aim wasn’t very good. How could Linda laugh at this when it was incurred trying to do something nice for her. What happened to the “poor baby, let me kiss it make it better” of those early years of our marriage. I shudder think she has realized what a dufus she has married. Pained Bob.

Sorry for the extra long post today, but I had to do something to keep my mind off the throbbing of my thumb. Not really, but it makes for a good excuse for the long post.