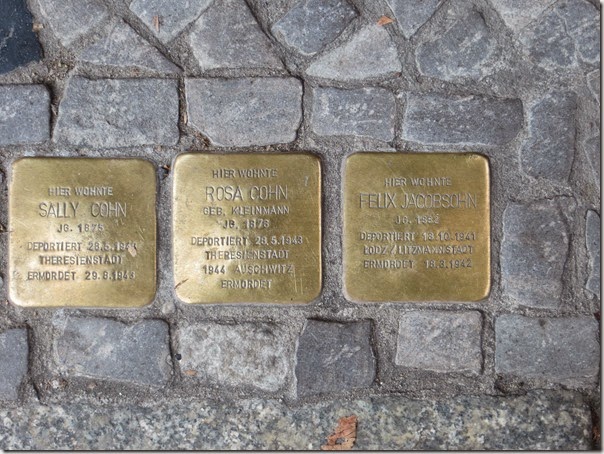 Three Stolpersteine (stumble stones) in the sidewalk outside the front entrance to our hotel. Before the modern hotel building was here, back during the time of WWII, these three people, not just names on a bronze plaque in the sidewalk but real people, lived here. They were deported, they were murdered in a death camp. It is all there on the plaque. I find it very hard to write about this. 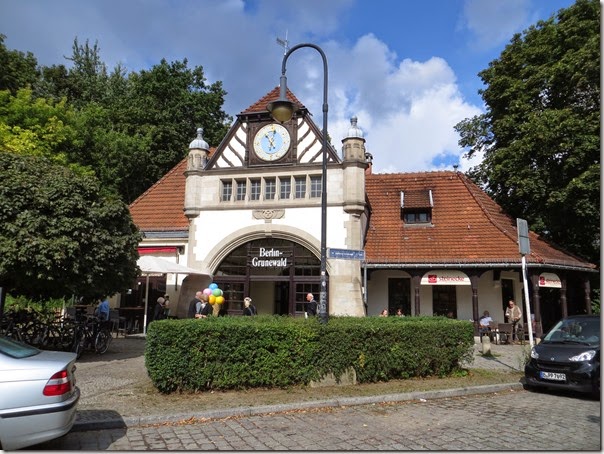 A train station on the far west side of Berlin. 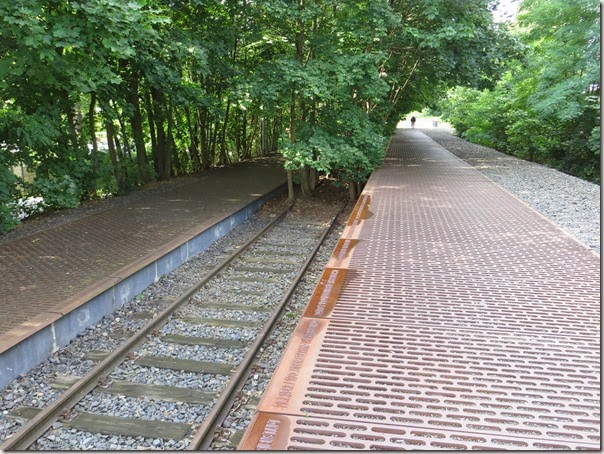 An abandoned track at that station. 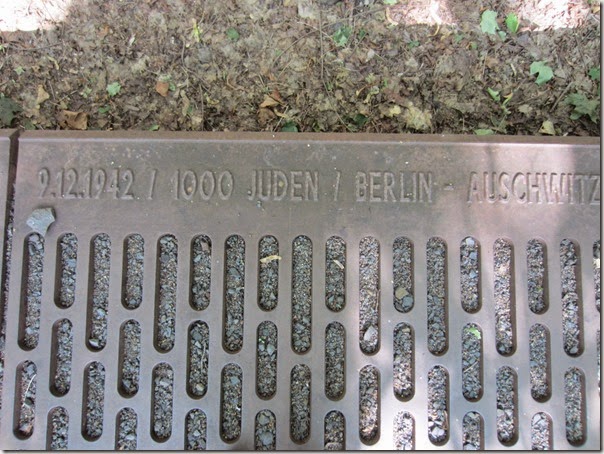 On December 12, 1942 a train left here with 1000 Jews. Its destination, the Auschwitz death camp. Man’s inhumanity to his/her fellow human beings. It is happening in countries around the world as we speak. One can not come to this place and not be moved. To do otherwise is disavow ones own humanity. 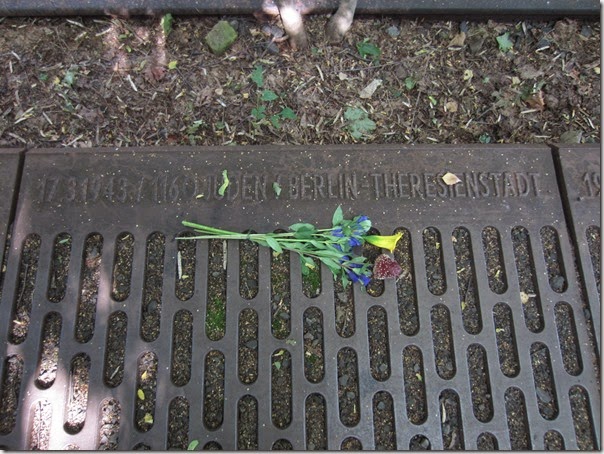 Another day, another train, there many, many over the years. The destination of this one, Theresienstadt. And now we are back to the first photo in this post. This was the concentration camp Sally Cohn was sent to, and where she was murdered. 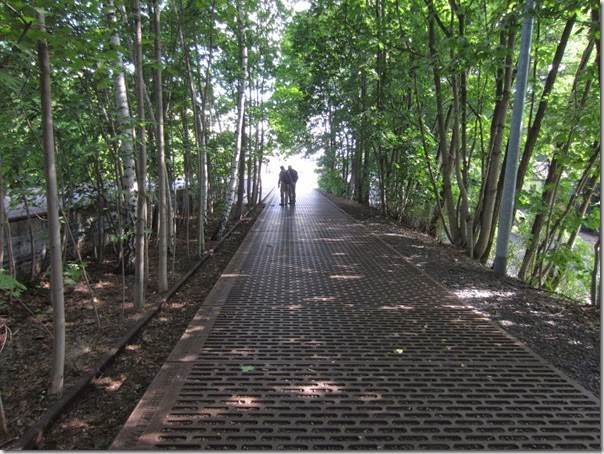 Is there a light at the end of mankind’s tunnel of Life? Will we someday come to love each other? Or will hatred be the mark man leaves to mark his brief interval on the universe’s stage?

For anyone wondering where this is in Berlin, or wanting to read more about it, it is Gleis 17 (Track 17) at Grunewald Station on the S7 S-bahn line. 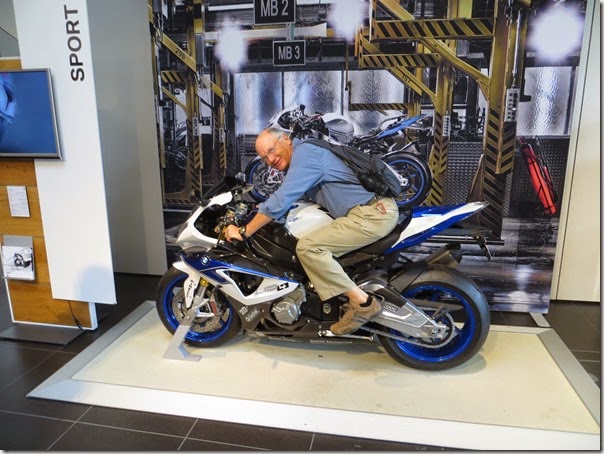 Later John and I visited the BMW Motorcycle plant. When I showed Linda this photo didn’t know what to say. Since I had trouble getting on and off of it, I didn’t say anything either. Old Bob. 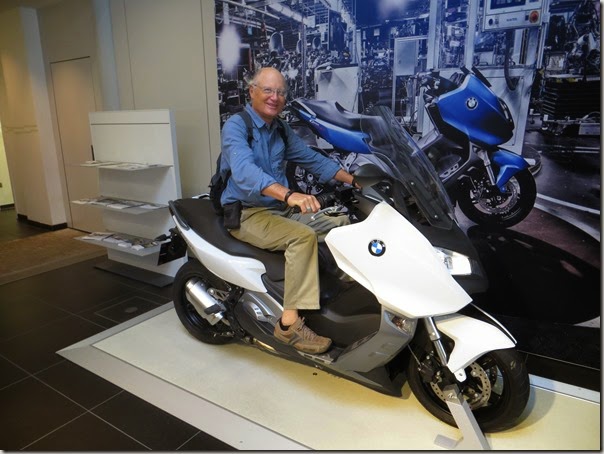 Fortunately, or unfortunately perhaps, they have something for everyone, even those old men whose youth is about as far gone as their hairline. Talk about comfortable. I could sit on this to watch TV in the evening. Linda’s comment to me when I showed her this photo was a quick and to the point,”Don’t even think about it.” Killjoy Linda. 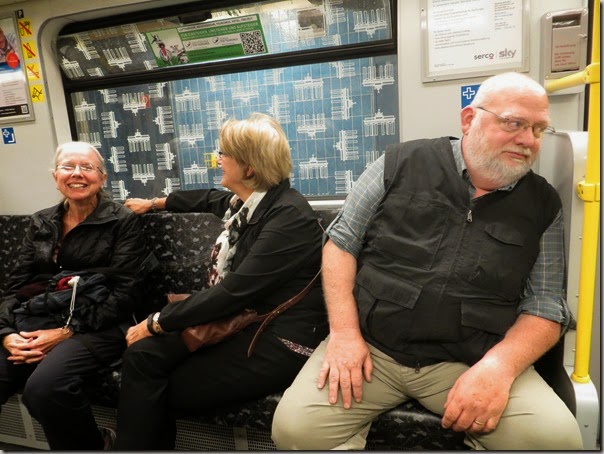 The secret of being a great tour guide is to keep your tour member’s attention. I think I need to work some more on that particular skill set. When I was getting ready to post this photo I complimented Linda on the fact at least she was paying attention to me. “Paying attention, “I wasn’t paying attention, I was laughing because I knew you didn’t have a clue as to what you were doing.” Unappreciated Bob. 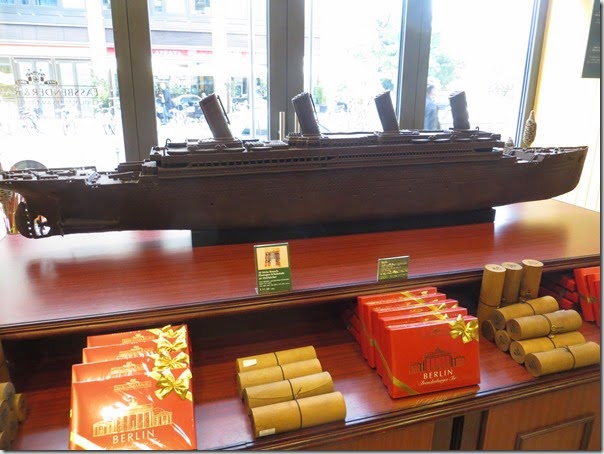 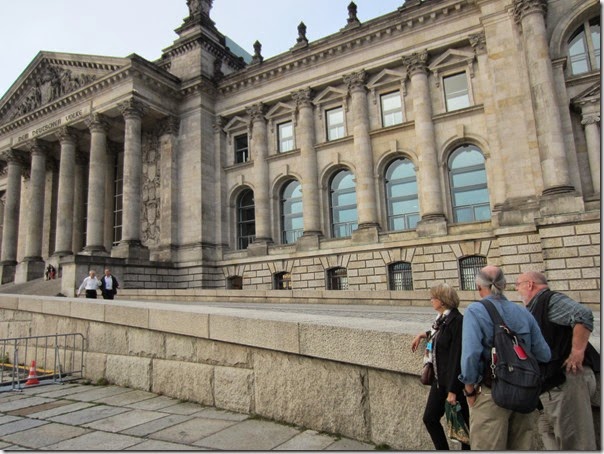 In the evening we took a guided tour of the Reichstag that was in English. Most people just visit the dome of the Reichstag, this tour allowed us to go behind the scenes so to speak. 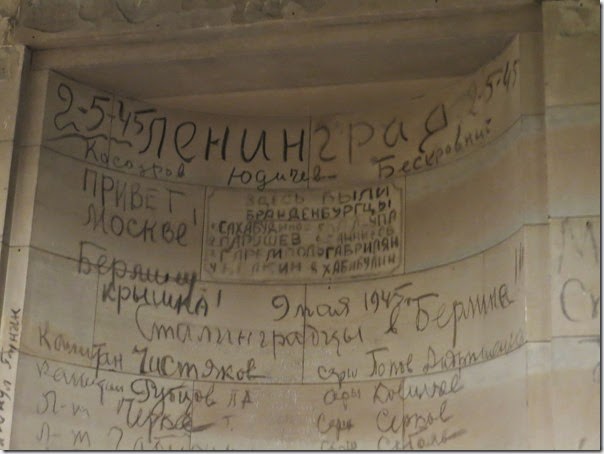 Graffiti written on the walls by Red Army troops. The top entry is dated May 2, 1945 which is the day the Red Army took complete control of the building. 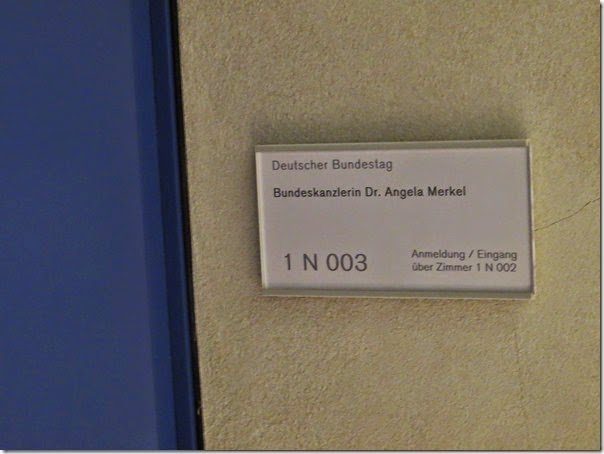 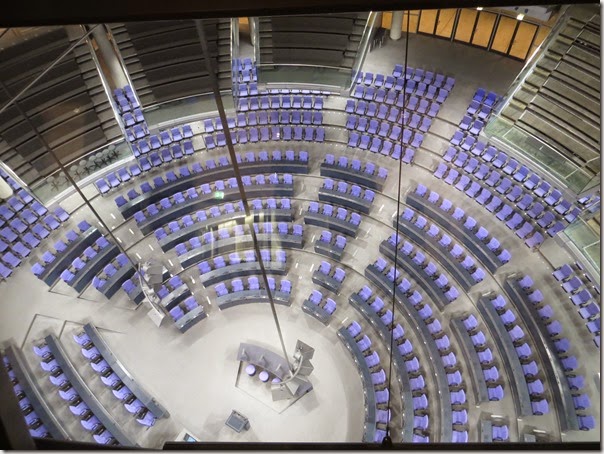 Looking down where the German legislature meets. 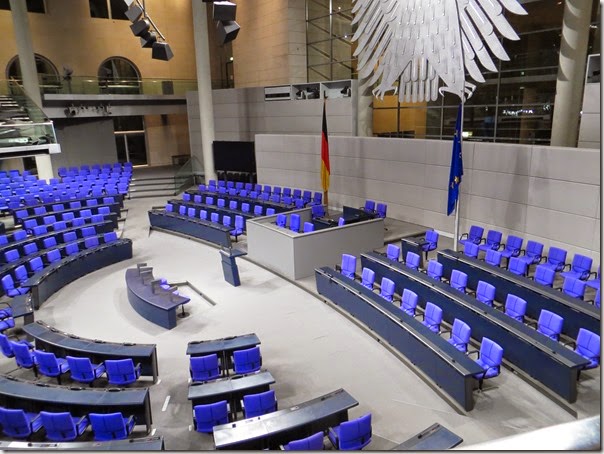 In the legislative chamber itself. I could only think, how we call ourselves the land of the free, yet there is no way an average citizen could just sign up for a tour and see what we saw in the capitol Building in Washington. 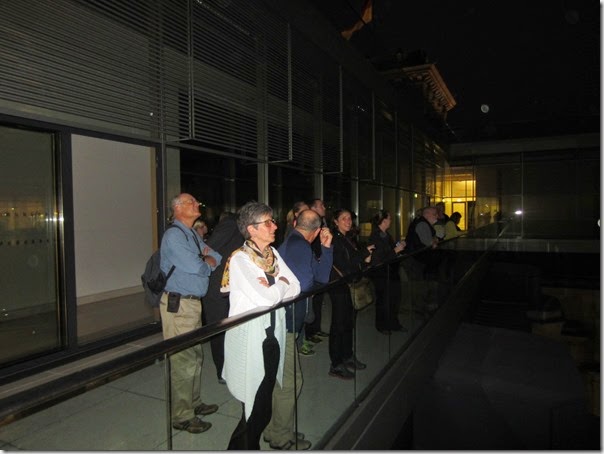 There were less than twenty people on the tour which was given in English. They came from Netherlands, Australia, Argentina, Russia and the USA. It was one of the best tours I have ever been on and we have been on a lot of tours like this over the years. 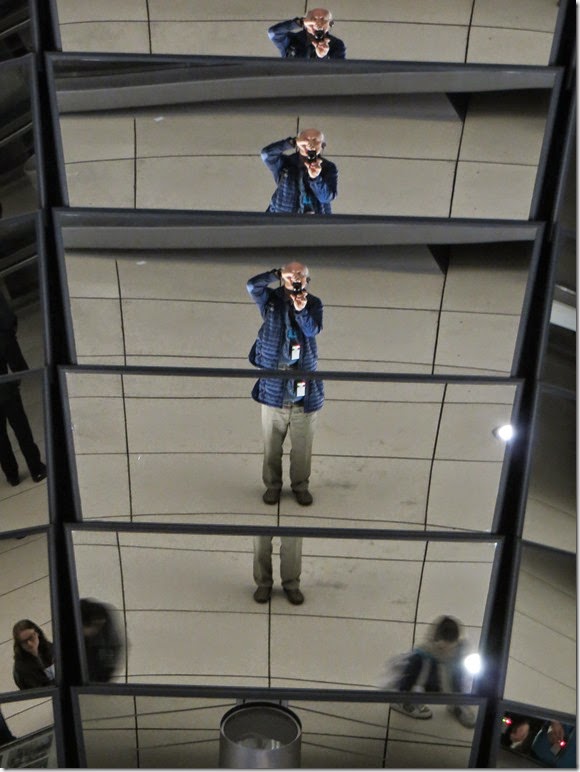 One can’t always be serious. 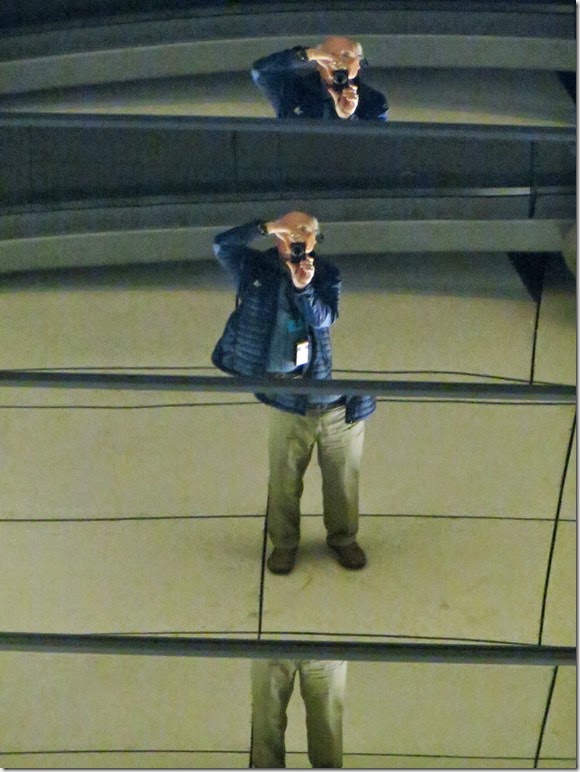 What can I say. When take a Berlin by Bob tour you never know what is going to happen. 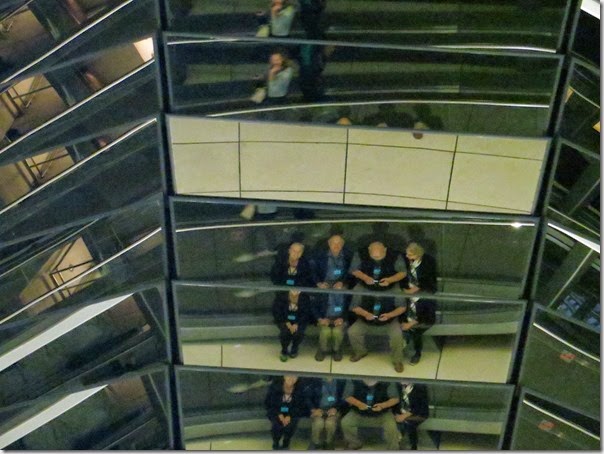 Group photo by Bob. sorry but I just couldn’t resist posting this one. 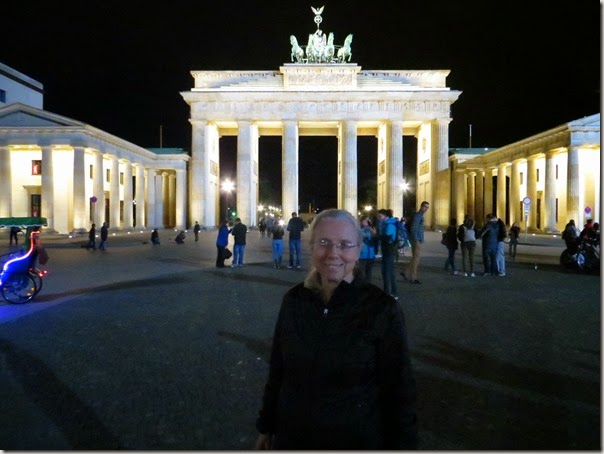 Real tourists have their photo taken in front of the Brandenburg gate at night. 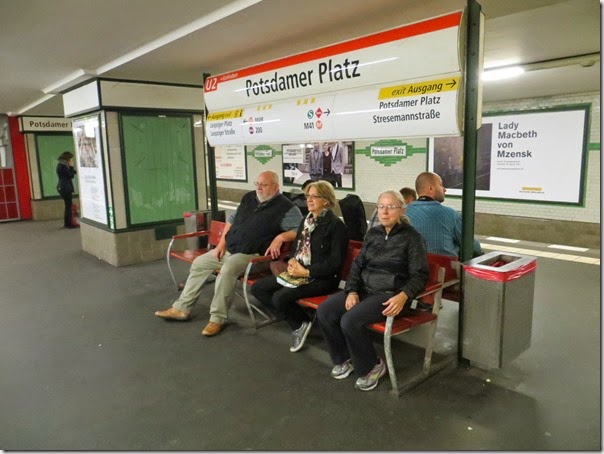 I you think they looked dazed you are right. It was eleven o’clock before we made it back to our hotel. Say what you want, but Berlin by Bob believes in giving his clients their money’s worth, even if they are too tired to know it. But you better believe that a GREAT TIME was had by all, because it was.