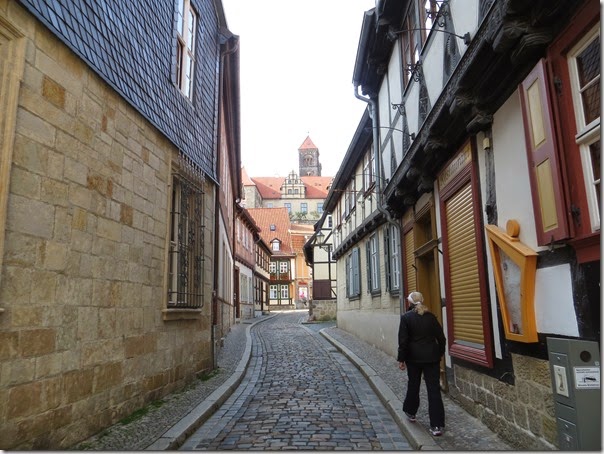 We have really enjoyed our time in Quedlinburg, no matter how short it may have been. It really lives up to its billing as the town in Germany with the most half timbered buildings. It is amazing walking around town with every turn yielding another street of half timbered buildings. In this case the turn also yielded a view of part of the castle rising above the roof tops. 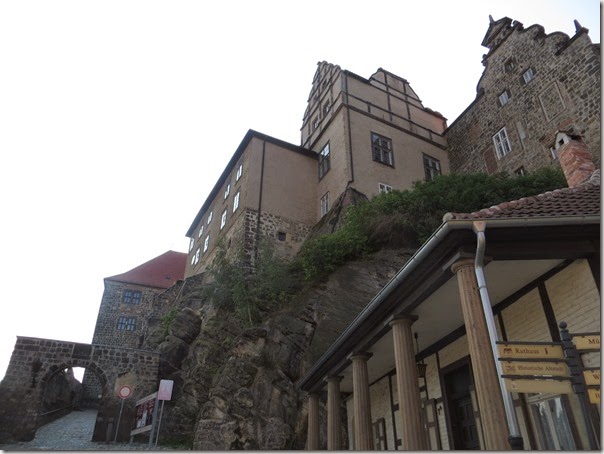 The fachwerk buildings hugging the hill below the castle. Did I mention castle? Did I not mention up? Needless to say Linda quickly nixed any thought I might had had of visiting the castle as there was far too much up in this up to the castle. 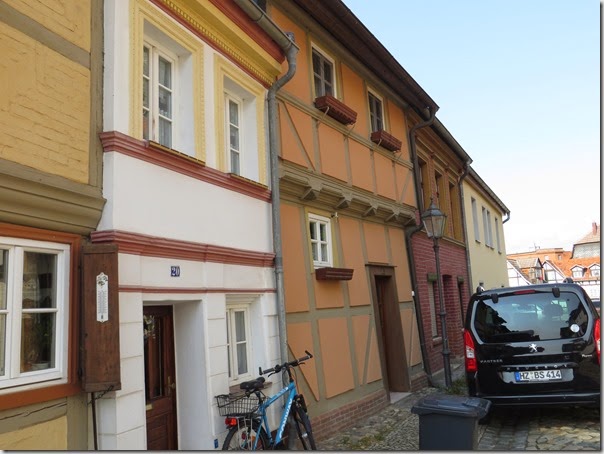 While it is difficult to tell from this photo, the first floor of the peach colored building angles in rather severely from the street. It was obvious the construction quality of that building wasn’t up to the standards of the buildings around it. Likely it was because seeing as how it was built at a much later date than most of the buildings in the area, the craftsmanship that went into the construction just wasn’t the same. 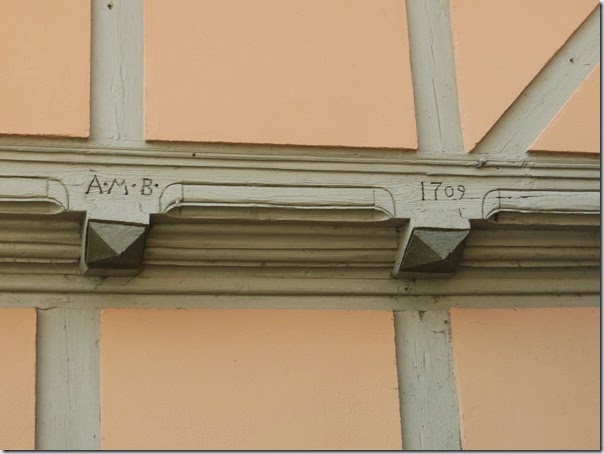 Checking the date of the building we could see we were right. It was a newer building having been built in 1709 instead of the 1500’s and 1600’s. How true it is that they just don’t build;d them like they used to. 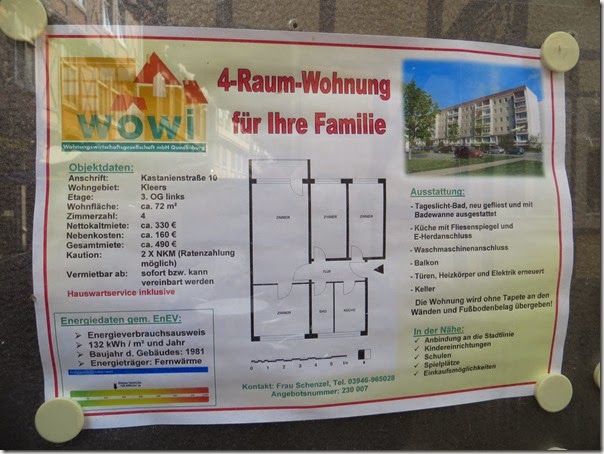 Moving now to the current time, something to give you an idea of what it costs to live in one of those former DDR apartment buildings. Four rooms, kitchen and bath totaling 775 sq ft, on the third floor (fourth floor US) with a balcony. All for just Euro 490 per month (approximately $650 per month). 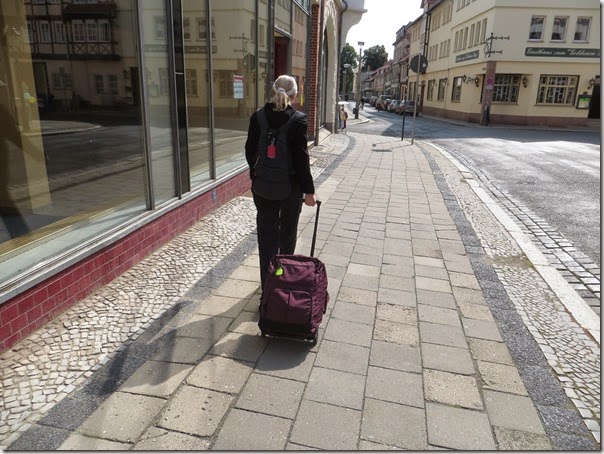 Off to the train station, accompanied by the clickity-clack of our pull-along luggage wheels on the sidewalk pavers, interspersed with the bouncing rumble of cobblestones. 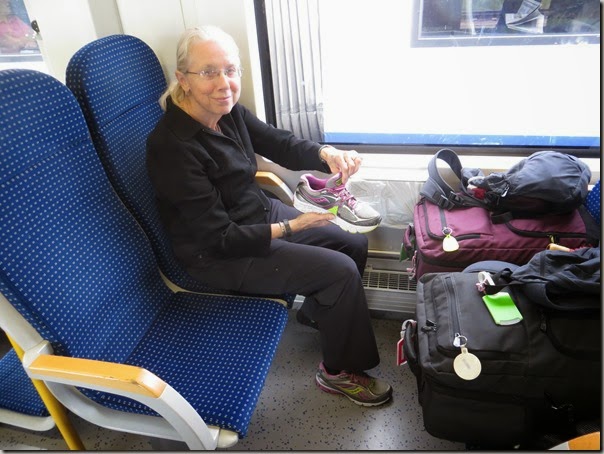 Linda asked why I took this photo. If she had thought about she would have realized it had been quite some time since I last posted a “footie photo.” The reason for the shoe being off was because she claimed to have picked up a rock. As to how you can pick up a rock from the floor of ta train, only Linda can answer that. 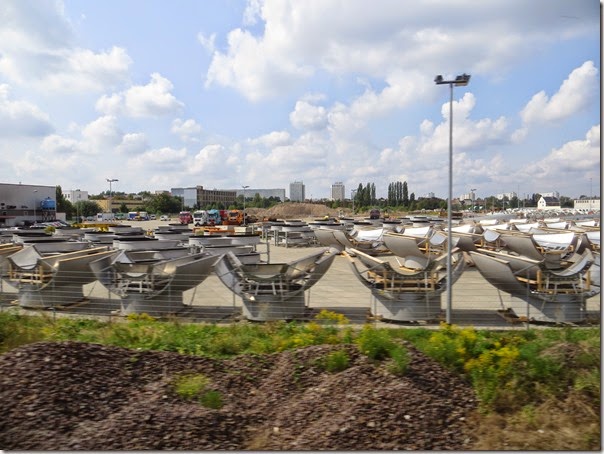 A huge factory on the outskirts of Magdeburg with wind turbine components as far as the eye could see. As I said, Germany doesn’t just talk about green energy, they do something positive about it. Contrast that to the politicians in our country who don’t have the guts to stand up to the head in the sand NIMBYites and are unwilling to work with their colleagues in the other party who are also just as focused on raising money to get re-elected that they are also unwilling to do something to benefit the country. Why do we let them use the excuse that they wanted to do something but the other party prevented it? Why has it come to the point that being seen as compromising to pass something that is even a step in the direction of helping the average person is seen as betraying all their ideals? Rant over. 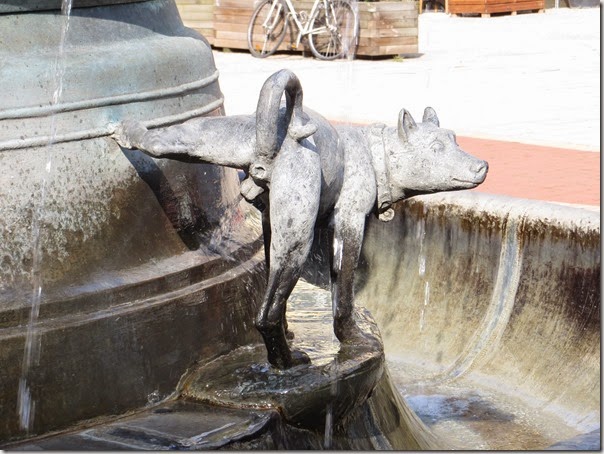 This sculpture of a dog is part of a fountain near our hotel in Magdeburg. It is the usual poor photo by Bob, and yes, the dog is doing what dogs do. German’s, serious when it matters, fun loving when they can. What’s not to like about this country. 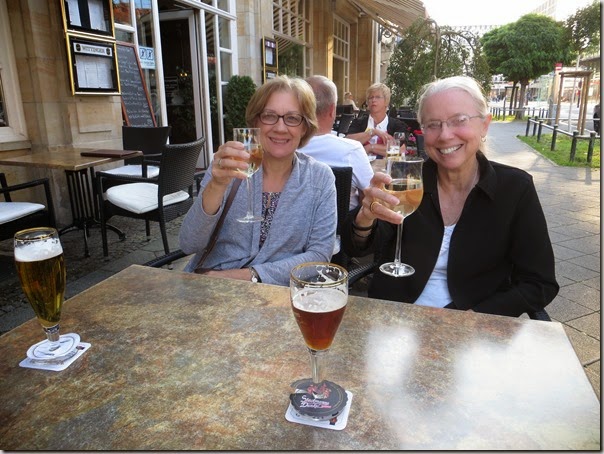 We were excited to welcome our friend’s, John and Judy, to Magdeburg to begin our next month of traveling together. As you can see, Linda wasted no time in showing Judy how to live like a German.

Sorry for the short post but I got behind and it was now or never for catch-up time. But that is just the way it is. Especially since we have to make sure we have enough time to Live Life.