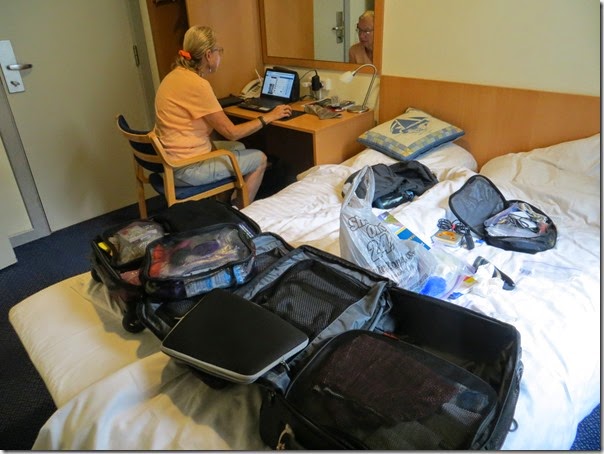 Time to checkout of our Copenhagen hotel this morning. One thing I find interesting is how the baggage situation is evolving. With every stop it seems that something migrates from Linda’s bag to my bag. Not saying there is anything underhanded going one, but…. 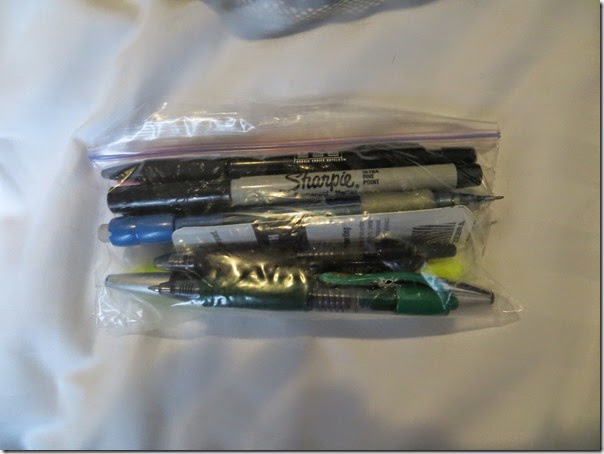 So here we are, spending three months traveling in Europe while trying to pack as light as possible, in which case you may be able to understand my puzzlement over this. This being a bag of six, yes six pens, two pencils, plus a pack of pen refills and a container of pencil leads. Oh, and don’t forget the Sharpie. When I inquired of she who packs as to what earthly reason there was for me to be carrying all that around, her reply was, “You never know when you are going to run out or lose one. It makes me shutter to think what I might find if I looked in some of the bags she packed and has me carrying. Ignorant, but smart Bob. 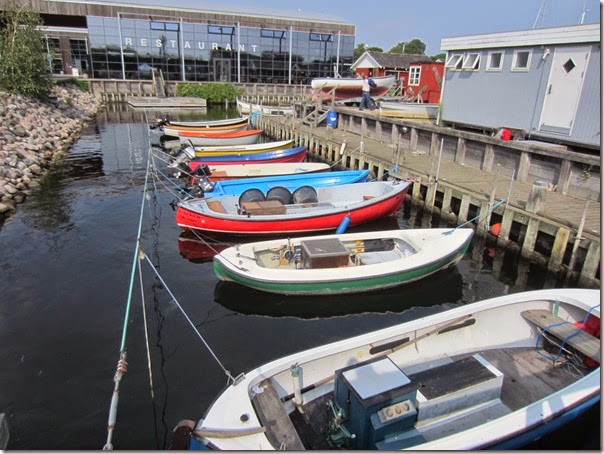 Linda took this on for you John. You taught her well. (Sorry readers, inside joke.) 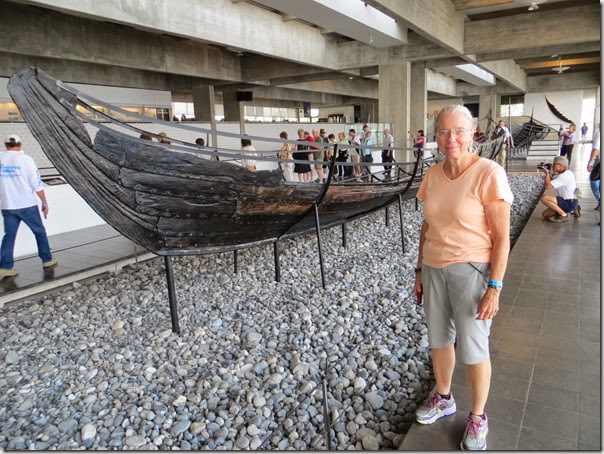 A morning visit to a Viking boat museum. There wasn’t much to the boats they had recovered from the bottom of the fjord, but that didn’t stop Linda from being a very happy girl. 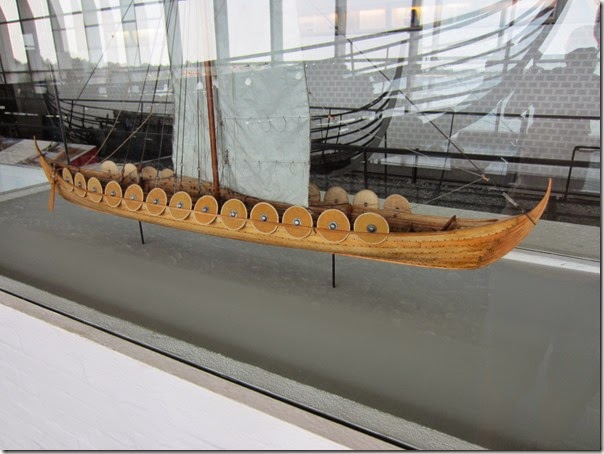 A model of one of the Viking war boats they found. 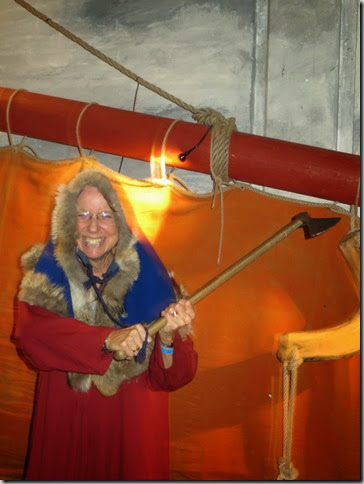 Run for your lives. On board one of the boats there was this ferocious female Viking  welding an axe and looking for blood. Guess when a woman with Viking blood in her veins gets on board a Viking war boat, her true nature comes out. Happy Linda. 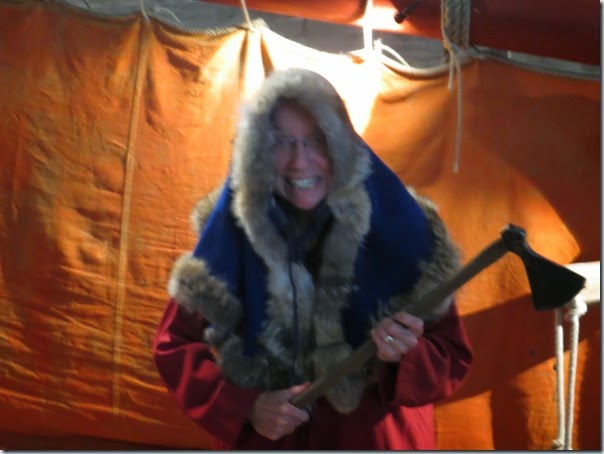 I had told her just before I took this photo to look mean. Next thing I know she’s growling than a few seconds later she starts swinging the axe as shown in the previous photo. Remind me to never ever make that woman mad. No wonder our kids used to refer to her as mean old mom. 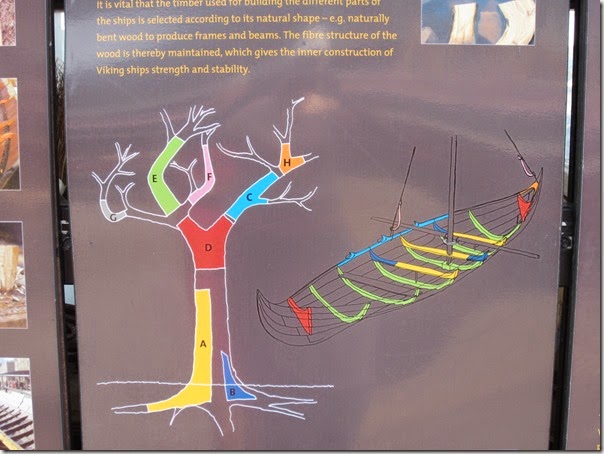 It was interesting to learn that Vikings did not saw any of the wood they used to build their boats, it was all split with wedges and they used the natural growth pattern of the tree to get the different pieces they needed. 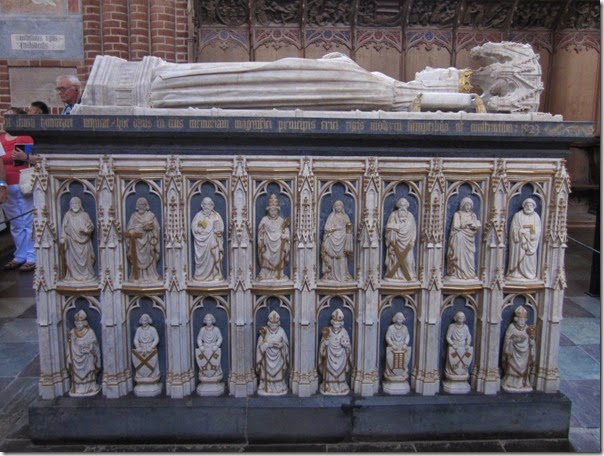 Later we visited the Cathedral where the Kings and Queens of Denmark are buried. Fortunately all the sarcophagus were roped off or I suspect Linda would have been right up there trying to peek inside one of them. 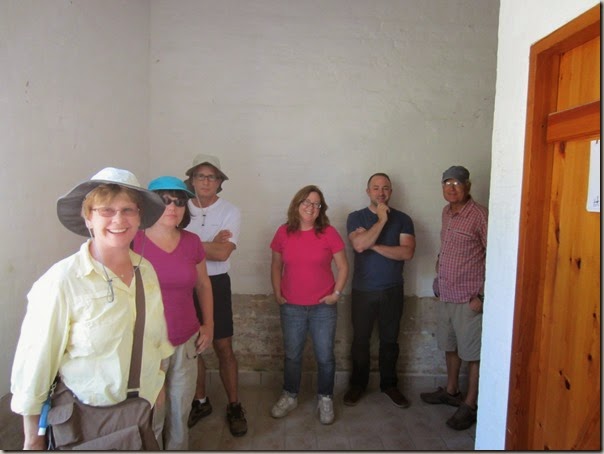 Line to the restrooms during one of of our stops. We are all standing in line waiting when I hear Linda say something about the men finally have to stand in line just like the women do. Next thing I know she was taking a photo of us. This is the same woman who has been known to use the men’s when there is no line. Do I ever take a photo of that? No, but maybe I will in the future. The reason for the line here was there were only two stalls and like many many places in Europe, they were bisexual. Or is that multi-sexual, or how about unisexual. Anyway, they were share and share alike, just not at the same time. 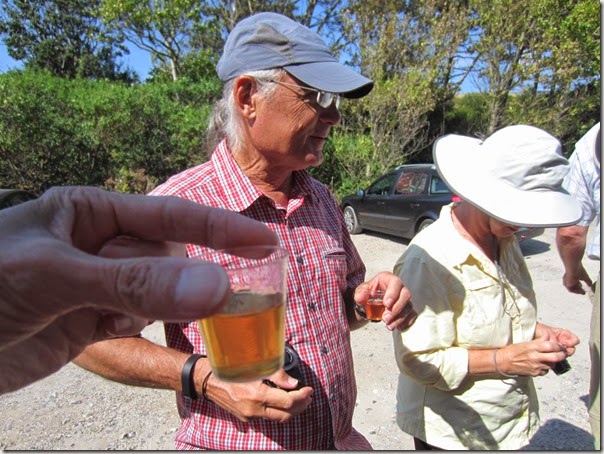 Moments later we were enjoying a glass of mead. 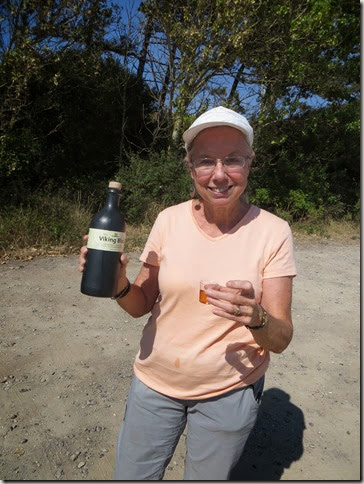 Never get between a Viking woman and her mead. 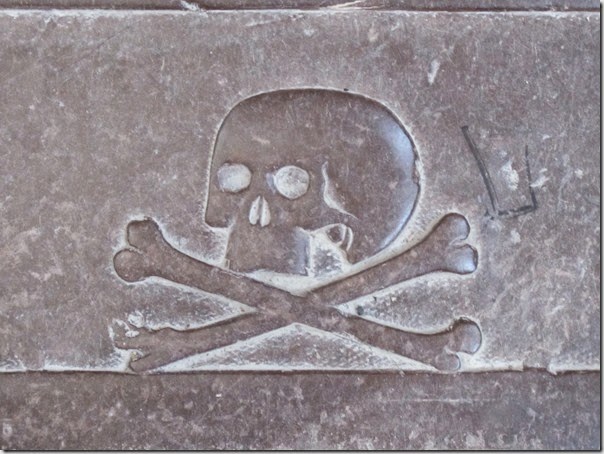 Linda and her dead people. I love how little things like this just seem to pop up when I download her photos. Viking or pirate, she certainly has the temperament on occasion to be either. Though I will say she has been a model of proper deportment so far on the trip. Now if I just don’t do something stupid she will stay that way. Perfect Bob. 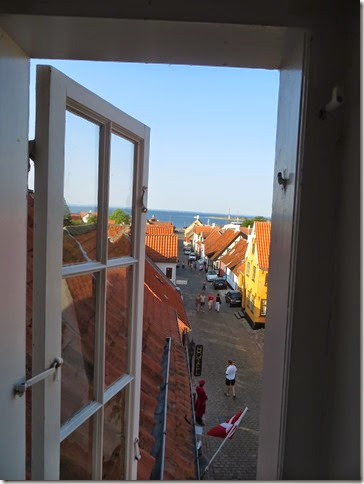 We are in a B&B on Aero Island for the next two nights. It was built in the 1740’s which is about the age on nearly all the buildings in this little town. We are in a room on the top floor that has a view of the harbor . That is about as a lame description of this place as could be given, but there are times when you just can’t put what you are experiencing in words. 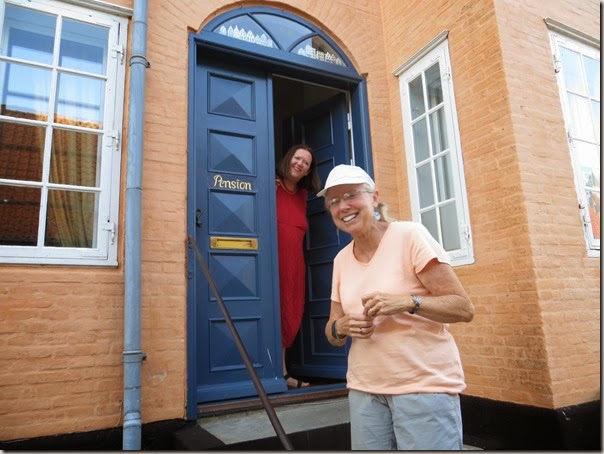 Our innkeeper in the background. The laughs were over Linda’s attempts, attempts being the key word, at locking the front door when we left for the evening. Let’s just say that if Linda had wanted to be a locksmith as a young girl, she would still be in locksmith school trying to remember which way to turn the key in the lock. 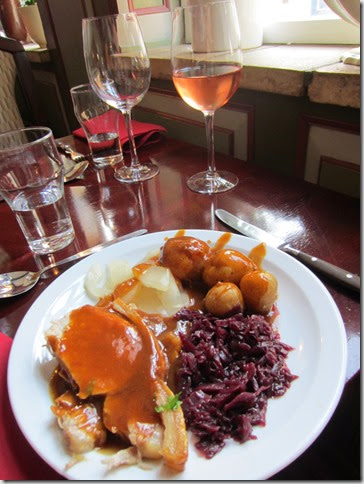 Viking meal for dinner with the group. Pork with the fat cooked to a crispy crunch on the outside and soft as warm butter on the inside, boiled potatoes, rich gravy, red cabbage and pickled cucumbers. It was so good even Linda went back for seconds, the heck with expanding waistlines and clogged arteries. sometimes you just have to suck it up and enjoy the good things in Life. (The photo is of Linda’s photo of her plate!) 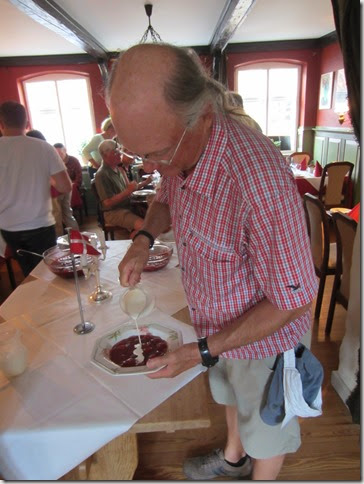 Dessert was bowl of strawberries with cream on top. The objective was to pour the cream in such a way that the result looked like the flag of Denmark, which is a white cross on a red background. 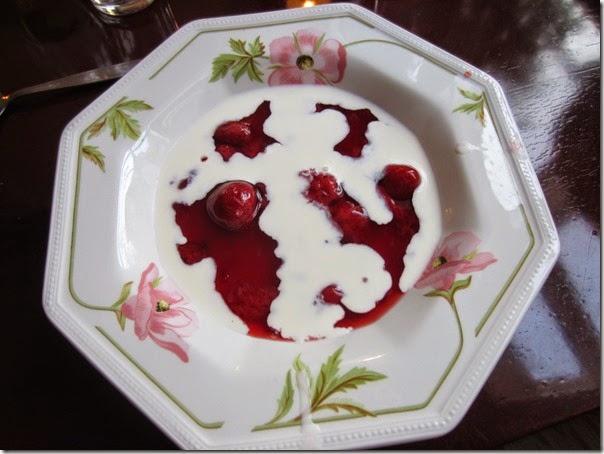 Linda’s looked like some red islands emerging from a white sea. Mine actually looked a lot more like the actual flag. Looking at mine she said, “Maybe yours looks better, but mine has a lot more cream on it.” That’s my Linda. Lucky Bob. 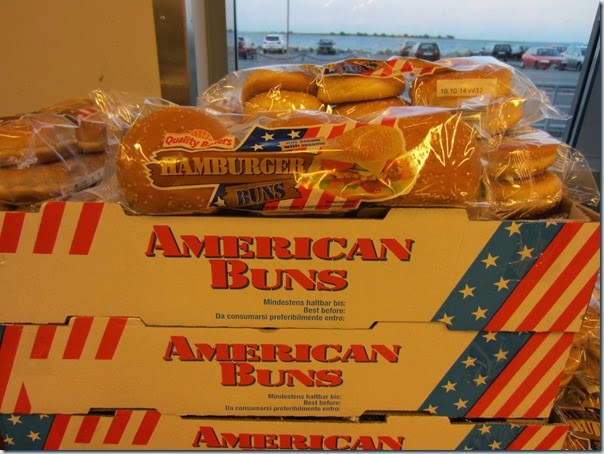 In the late evening we walked down to the harbor where Linda announce she wanted to check out the grocery store, and don’t ask me why, I can never understand her. Anyway, this is what showed up on her camera. Between all those dead people in the cathedral and hamburger buns in the grocery store it was a great day for Linda. I lost a few more hairs on my head scratching it and wondering about what she wanted to do next. At this rate I won’t have any hair left be the time we return to the USA, though Linda probably wouldn’t even notice since she will most likely be looking for either dead people or hamburger buns. Poor Bob.