Day One Along the Norway Coast 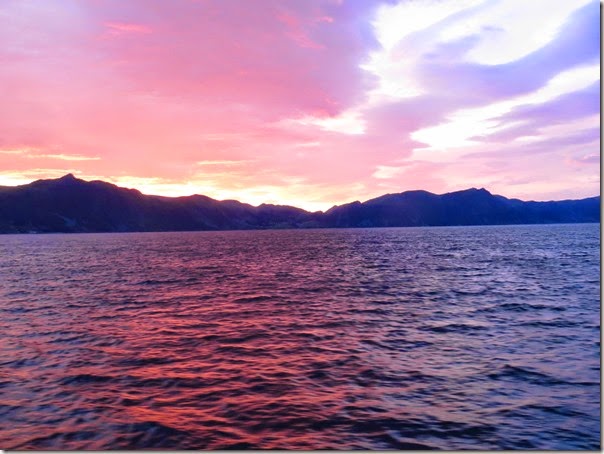 Sunrise this this morning was unbelievable. It made me glad I am an, up with the rising sun and to bed with the setting sun, person. Even if it means up at 4:30 and to bed after 10. Both of which will change with the ever lengthening daylight hours the further north we travel. 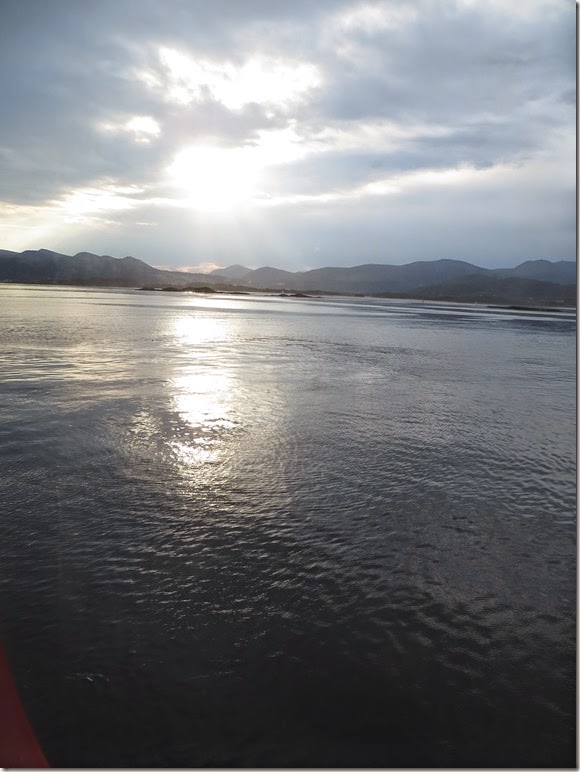 Later in the morning, but long before sleeping beauty arises, the view is no longer as spectacular. As they say, the early bird gets the worm. Or in this case, the view of the awesome sunrise. Early-bird Bob. 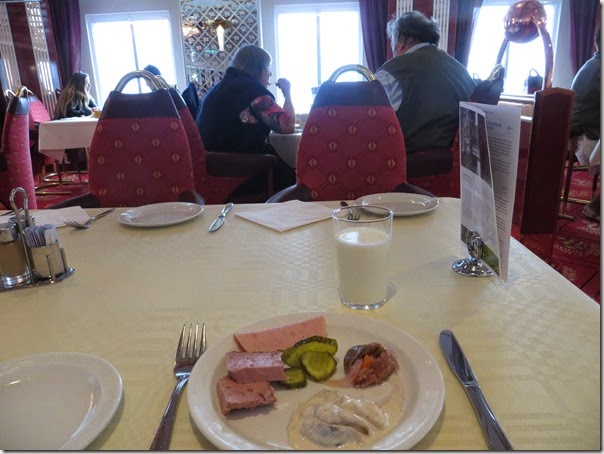 The very definition of a Norwegian breakfast. Liverwurst and pickled herring in abundance. The glass of milk is what goes for regular milk in this part of the world, 1.3% fat. Tastes every bit as good as the 3.5% artery clogging, heart attack inducing regular milk in the USA. What to the Europeans know that we American's don’t? Maybe it’s that people’ health comes before the needs of the politician's biggest political donors. America. the best country donations to politicians can buy. 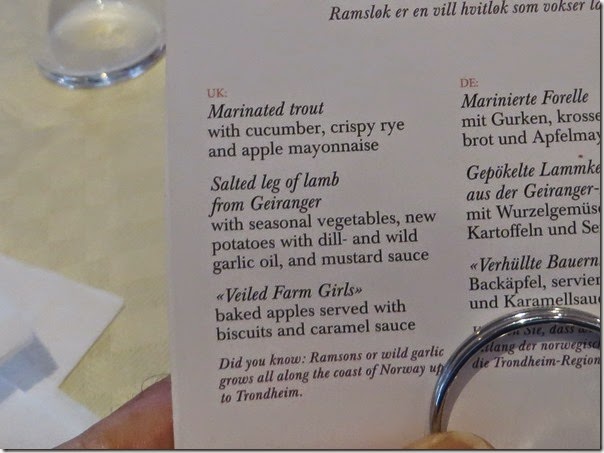 Tonight’s menu was posted at each table this morning. Linda was not happy at all. I was hoping we could get two or three servings of each course. I love marinated trout, Linda gags at the thought of it. I love lamb, Lets just say that Linda doesn’t allow lamb anywhere near her presence. Very Happy Bob. Linda made a bread and jelly sandwich at breakfast so she would have something to eat tonight. To each, his or her own. 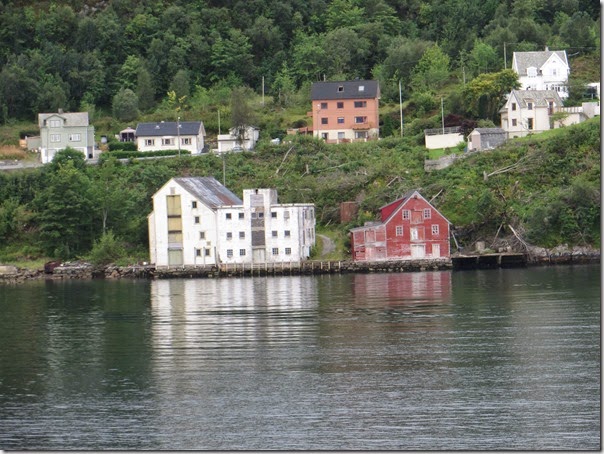 There is no way to post photos that do even a tiny bit of justice to the wonderful views we saw today as we passed small towns, individual houses, old fish canneries, large towns and waterfall after waterfall tumbling down high cliffs. Now we know why all the Europeans take the Hurtigruten ships which go up the many fjords while the Americans take the big cruise ships that call at one or two ports such that they see nothing of the real beauty of Norway. Bob and Linda, enjoying our trip. 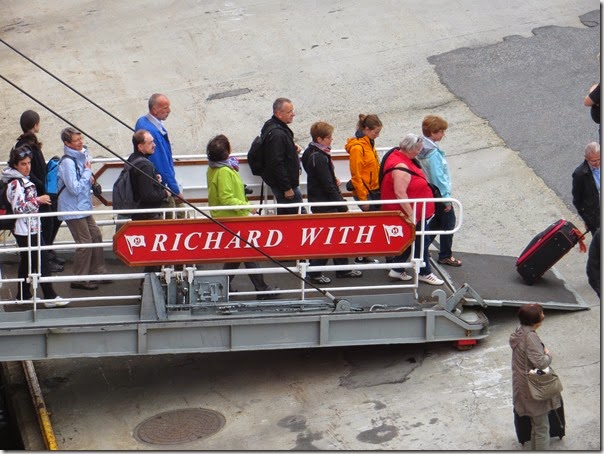 Passengers disembarking at the first stop the ship made this morning. It was only moments later the rain started and the umbrellas sprouted like weeds in the early spring. 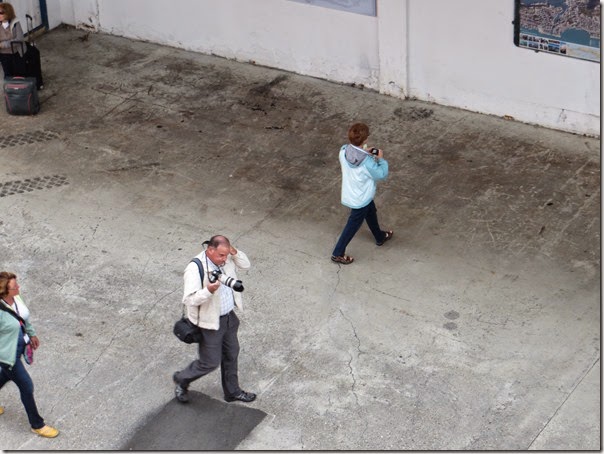 Members of our recent Rick Steve’s tour might recognize the people in the center and top of this photo, Glenn and Martha. Martha is heading to to the map to see where she can go. Glenn, with the camera to end all cameras is heading off to do what else but to take photos. Meanwhile, since the stop was only for 45 minutes and it was starting to rain, Linda and I stayed on board. We are here to relax and enjoy the trip, not rush off to see every thing there is to see. Neither way is the best way, only the way that fits how you want to travel is the best way. Happy Glenn, Martha, Bob, and Linda. 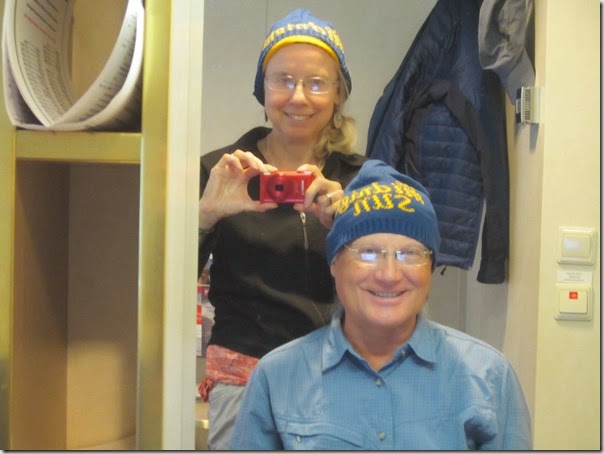 As I was in the toilet this morning there was knock on the door. Linda opened the door and just as I flushed, the noise of which being practically deafening as the flush involves vacuum sucking everything out.When my ears stopped ring I heard Linda talking to someone. That was how we ended up with these warm “The Land of the Midnight Sun” hats.  And wearing mine outside a short time later I can attest to the fact they are perfect for this climate. 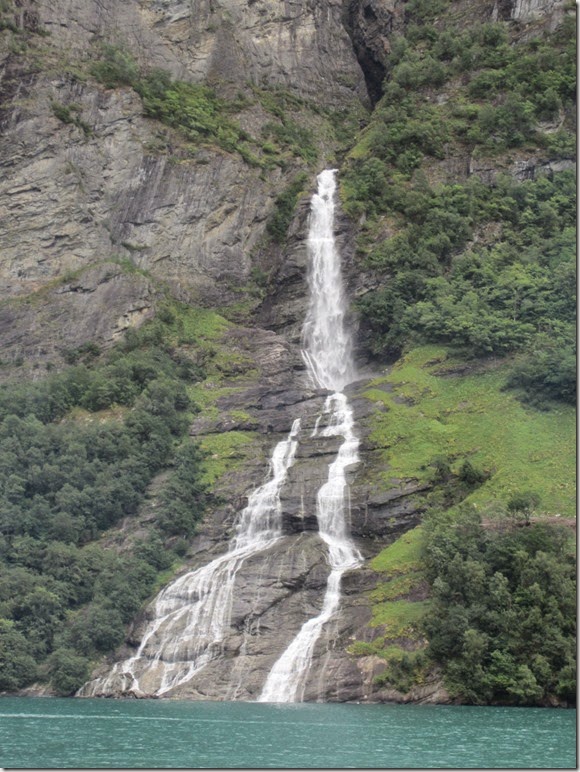 Sailing up a fjord we came upon this beautiful waterfall, at which time I decided it was the perfect place for a “Selfie.” This selfie being a photo of Linda and myself with the waterfall in the background taken by me holding the camera at arms distance in front of us. Since Linda is the one who normally takes the selfies, the results were interesting, to say the least. 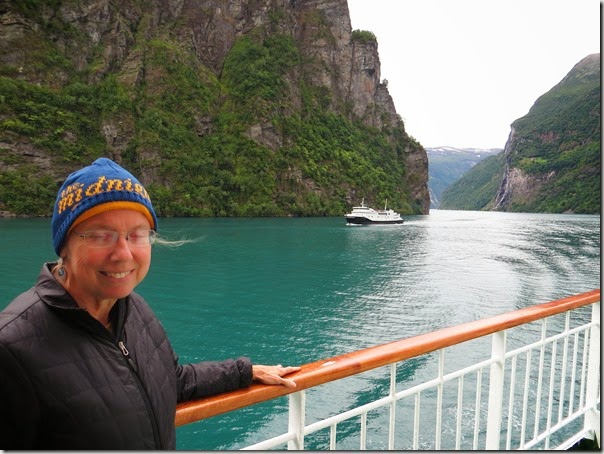 Attempt one. Not only do you not see me, neither does Linda since she has her eyes closed. So much for my first attempt. At least I managed to get a passing boat in the picture. 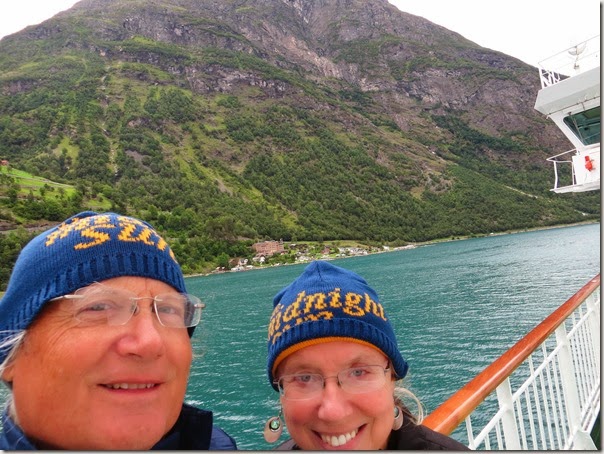 Attempt two. One could say it is an improvement over the first one since I am now in the picture and part of Linda is. How about I try holding the camera in a little lower for the next one. 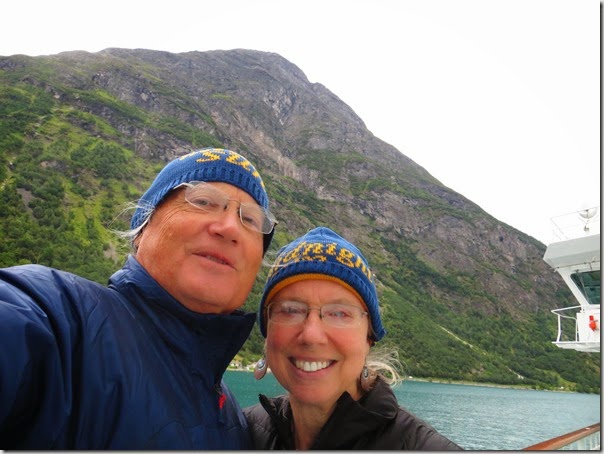 At least I got Linda centered in this one, even if I might be a little distorted. still have a long way to go to get us both in the picture with that waterfall in the background. darned if I can figure out how to hold the camera. Puzzled Bob. Okay, now I have us both in the photo but where in the world is the waterfall? 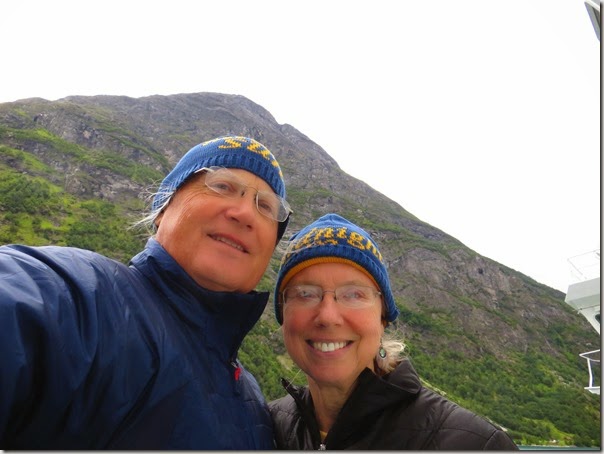 I gave up after this one since I included the top of the mountain instead of the waterfall. No wonder most of the selfies people post look so stupid. It is a stupid photographer taking the picture. Stupid Bob. Beautiful Linda. 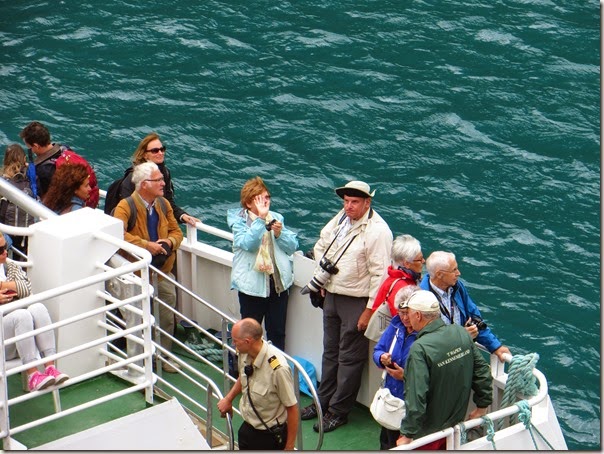 Glenn and Martha ready for the transfer to land and a bus trip to the top of the fjord. Meanwhile we were staying put on the big boat. 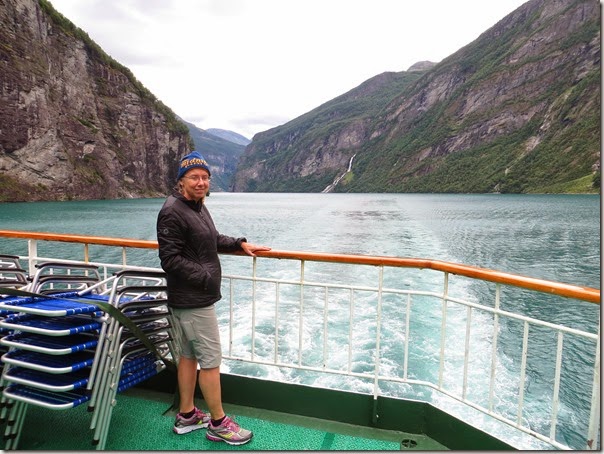 Typical tourist in foul weather gear at the stern of of our ship as we traverse one of the Norwegian Fjords. How did she ever get so lucky in Life? 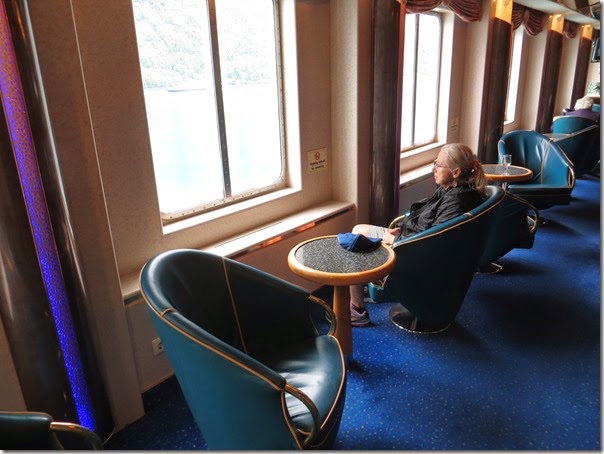 Typical tourist sitting in a lounge and looking out one of the windows of our ship as we sail on another of the Norwegian Fjords. How did she ever get so lucky in Life? 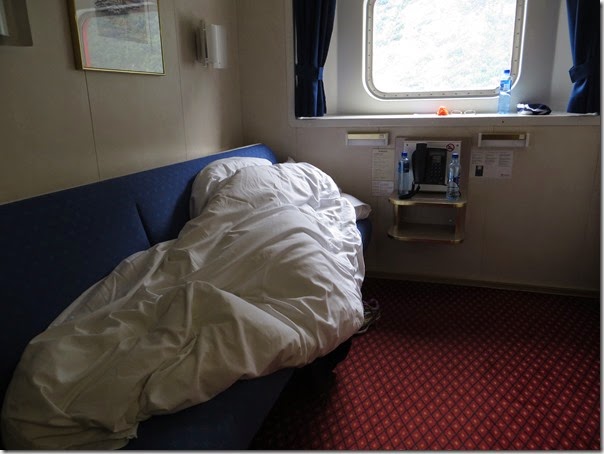 No, it not a scene from the movie, Revenge of the Mummy, it is that person in the previous two photos sacked out in the late afternoon after a hard day of watching the fjords go by. Tired Linda. 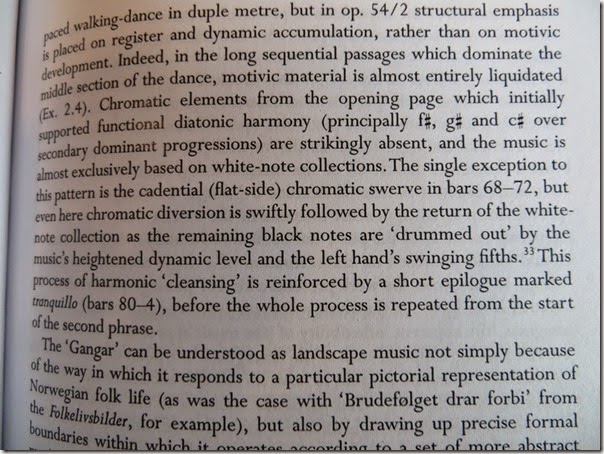 I guess this is as good a place as any to post this. Linda was spending a good part of the day in ship’s library as that was where the wi-fi signal was the best. On occasion I would join her and one time I picked up a book on the famous Norwegian composer, Edvard Grieg, he of the Peer Gynt Suite. I have literally read thousands of book over my lifetime, but I must confess, this is the first one I couldn’t make heads or tails out of. Having lost a good portion of my hearing as a teenager, music has never been something I could appreciate. Now I know it is neither the music nor the books about it. Humbled Bob. 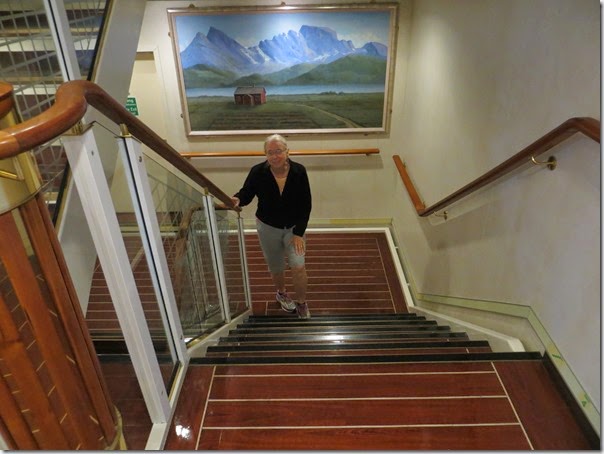 I have put off posting a photo of this but I can no longer postpone the inevitable. Linda is a total dork when to comes to finding her way around the ship. She has no clue whether to go up or down let alone right or left when leaving our room to go somewhere on the ship. I don’t know how many times we would leave our room to go somewhere on the ship and I would look around and there would be no Linda. Stopping and waiting, soon she she would appear with a sheepish look on her face and the comment, “I went the wrong way AGAIN.” I must say she is getting better and by the end of our voyage she will likely be able to find the dining room own her own. Just kidding. Really. Honestly. Hopefully. 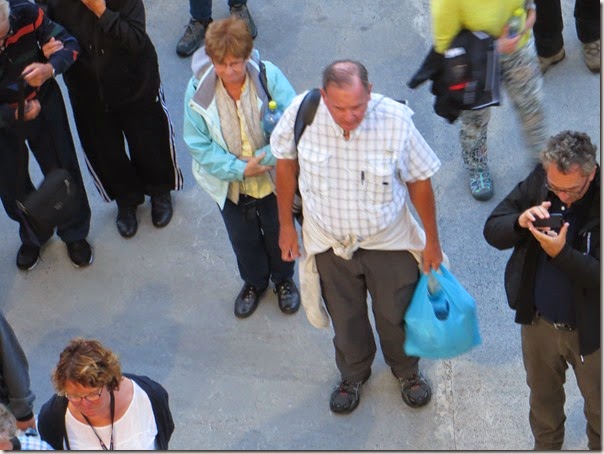 Why we didn’t go on the fjord bus excursion today. Here are Glenn and Martha  boarding the ship at 10pm and looking somewhat worse for the wear after the eight hour plus bus trip. Something tells me we may not see them too early tomorrow morning. And since it was 11 before we finally went bed ourselves, we may also not be exactly early risers either. And thus concludes another great day.