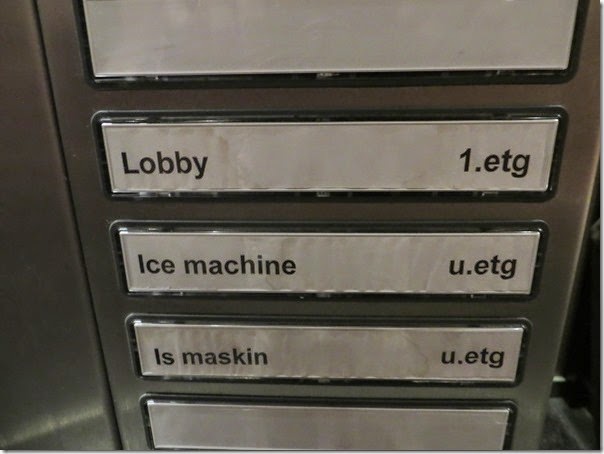 I had been wondering how Linda knew the ice machine was in the basement of the hotel so I asked her. She said she read it by the floor button on the elevator. That impressed me as I didn’t know she could decipher those words in Norwegian. At least it did until I remembered to look at the floor stops in the elevator when I got on this morning. I’ll be an optimist and believe she read the bottom sign and didn’t see the middle one. Gullible Bob. 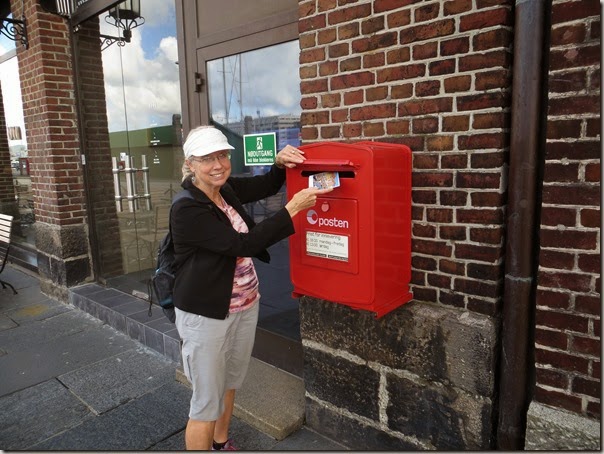 For over two weeks I have been carrying the ever increasing amount of posts cards Linda has been buying. At last she sat down and wrote on them. When she went to buy stamps for them she discovered why she was one of the few people buying postcards, it is very expensive to send a postcard to the USA. The good part is it will greatly cut down on her postcard buying addiction and will lighten the load on my back. 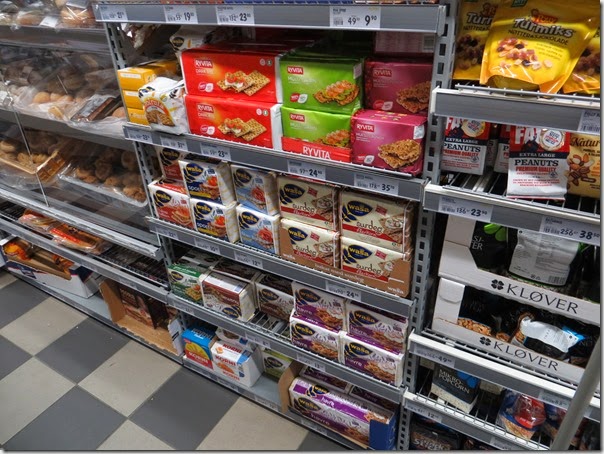 We like to eat Wasa crackers, but always have a hard time finding any in the stores. Not over here, even this small market had a whole section devoted to them. Smart Scandinavians. 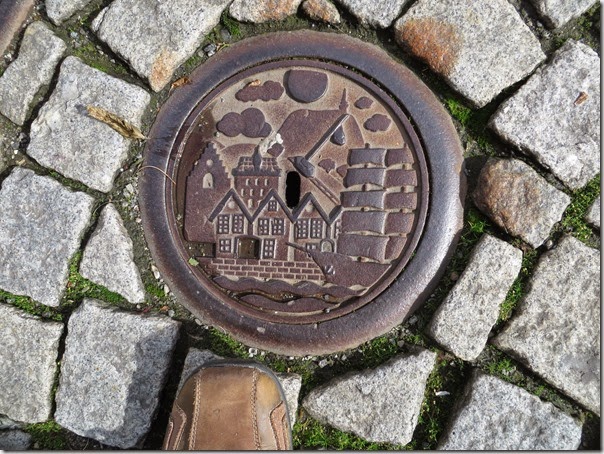 Readers are lucky I have such an artistic eye. This morning I saw this tiny, but beautiful utility access cover in one of the streets in the old town area. In order to give you an idea of its size I have included the toe of my shoe in the photo. Brilliant Bob. 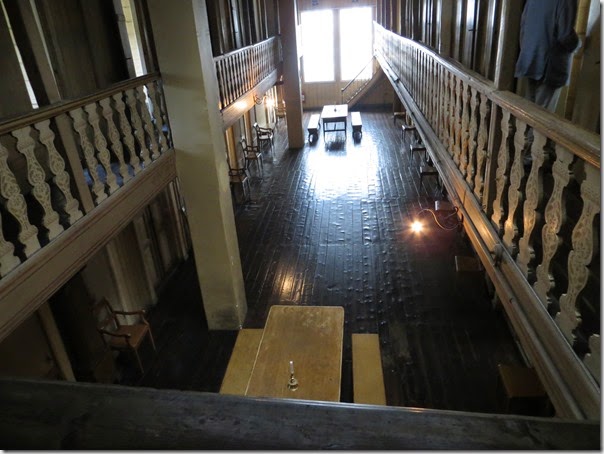 A very sobering place. A museum in a former leprosy hospital. To read what those people went through was heart wrenching.  To read the words of the teenagers and how badly they wanted to be able to live a life just as normal teens did, but because of their leprosy they were instead shunned and ridiculed.  It makes you really think about the golden rule: Treat others exactly as you want to be treated. 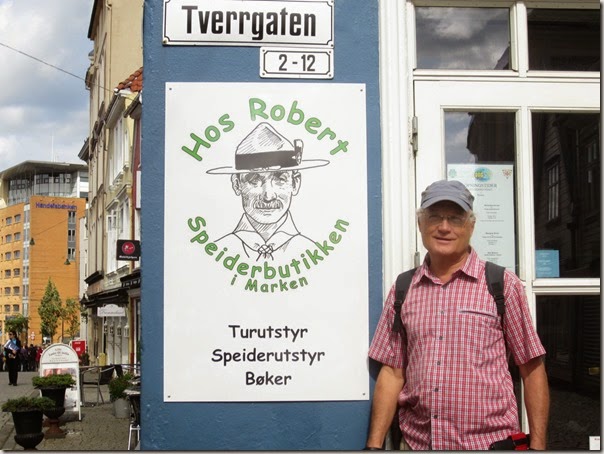 Linda asked me several times to pose in front of the sign which she said was for Robert’s House. My intuition tells me it says something different, but she’s the boss and I get to be the whatever you say dear. 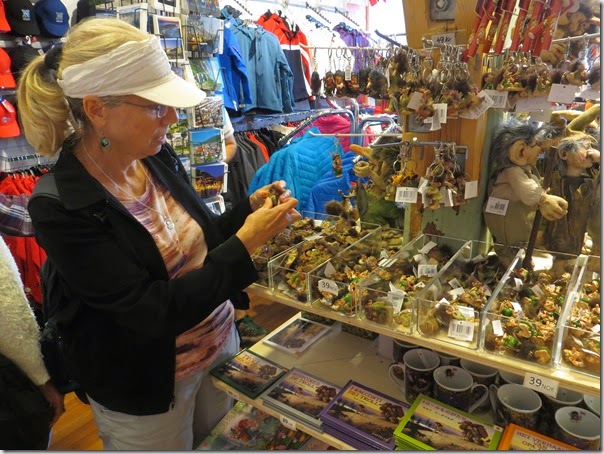 Every store and street vendor in this town has what I named, “a troll trove”. Linda had been looking for just the perfect troll figure to buy since we arrived Today she found it. Happy Linda. And since it is small, only weighs a couple of ounces and I know I will be the one carrying it around for the next two plus months, Happy Bob. Besides that, I have to admit it really is very cute. 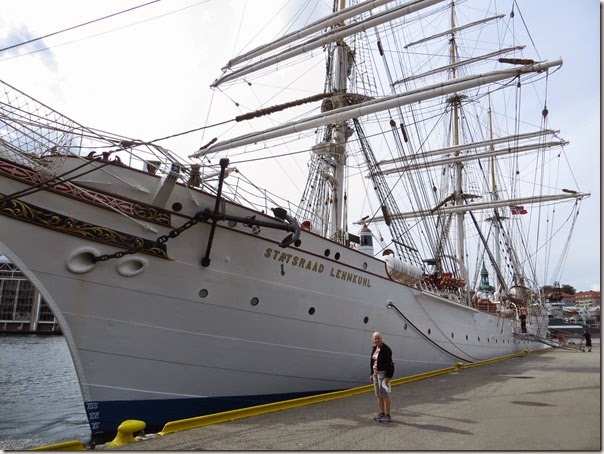 We also discovered this tall ship which arrived in port early this morning, that does 5 to 7 day working summer cruises from Bergen. As we learned more about it, we think the next time we are in Europe we will try to book one of their trips as it sounds like a lot of fun. You can even climb the rigging and help with the sails during the voyage if you want. I want, I want. Linda says standing on the deck would be adventurous enough for her. 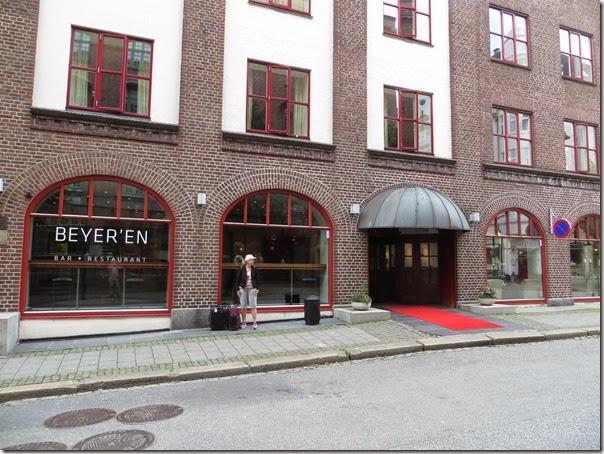 Waiting for the bus to pick us up and takes us to the Hurtigruten Terminal. 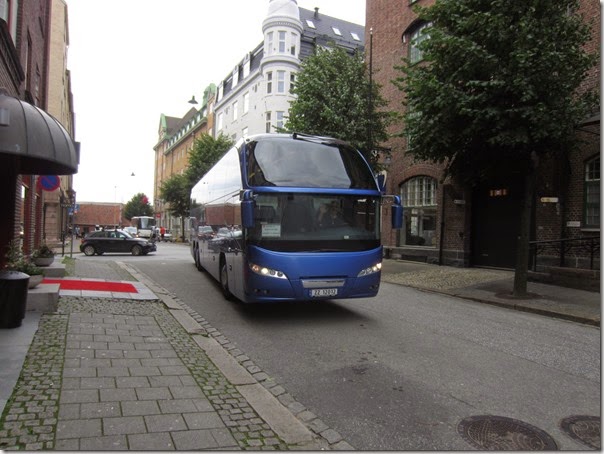 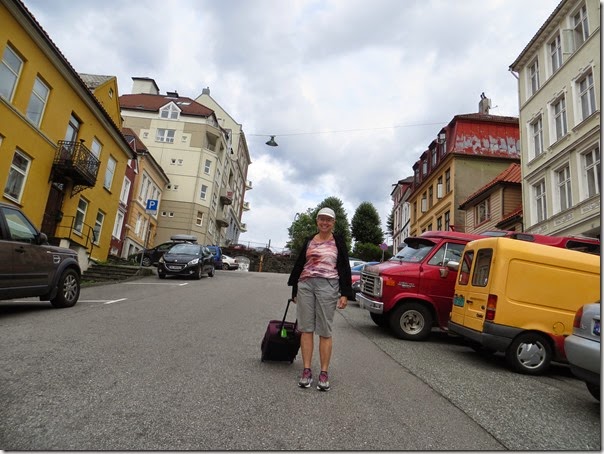 Descending a very steep street during our 20 minute walk to the Hurtigruten Terminal after the bus didn’t stop for us. What can I say, sometimes you win and sometimes you don’t know you are supposed to let the desk personnel at the hotel down the street know you want the bus to stop. 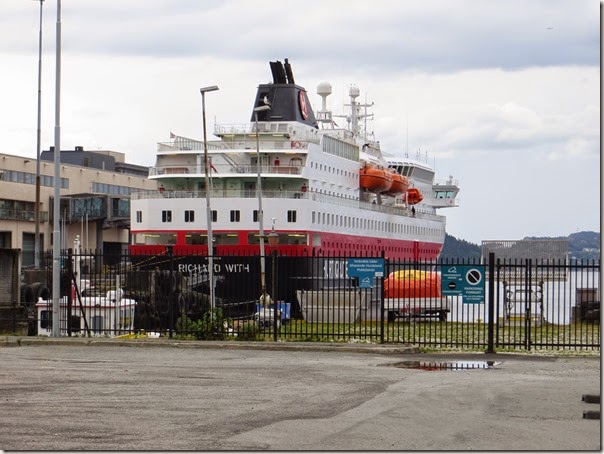 Our first look at our ship, the Richard With, pronounced Reecard Veet. Built in 1993, is is 122 meter long, cruises at 15 knots, and has berths for 458. Once we actually got underway, it proved to be big enough to get us to our destination safely while giving us some of that old time rock and roll motion. Patch wearing and Dramamine taking Linda. 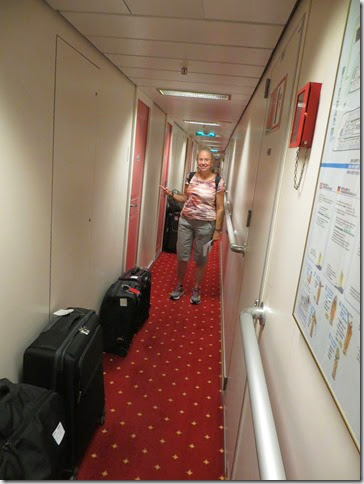 Linda was happy to find our room and see our bags beside the door. Out of the hundreds of great reviews  she fixed on the one where one passenger’s luggage never showed up. At least she wasn’t talking about the ship sinking. Happy Linda. 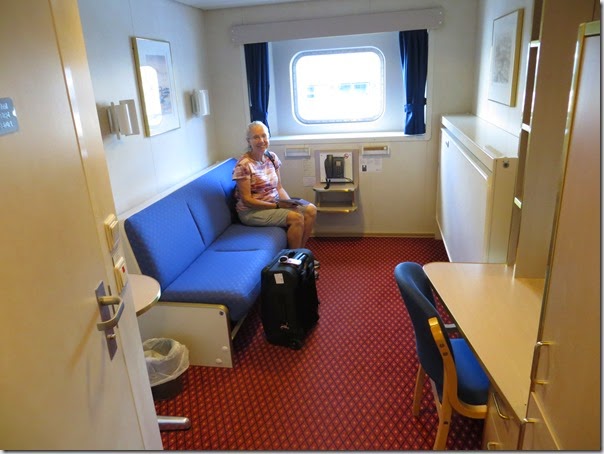 What we will call home for the next week. A room amidships, the second deck above the waterline with a nice view out the window. Exactly what Linda wanted. And when there is the constant threat of seasickness, what Linda wants, Linda gets. Nice Bob. 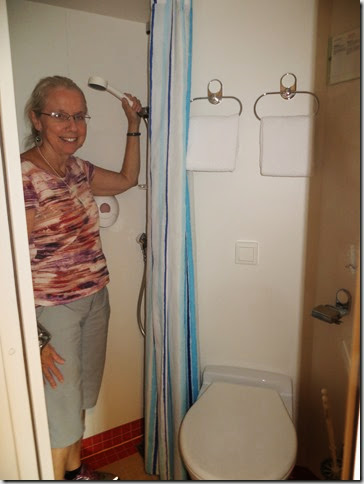 My beautiful, tall, slender wife demonstrating just how tiny the shower area is. Now I wonder if the shower curtain will stick to her butt when she takes her shower tomorrow morning at which time we will find out just how skinny she is. Chuckling Bob. 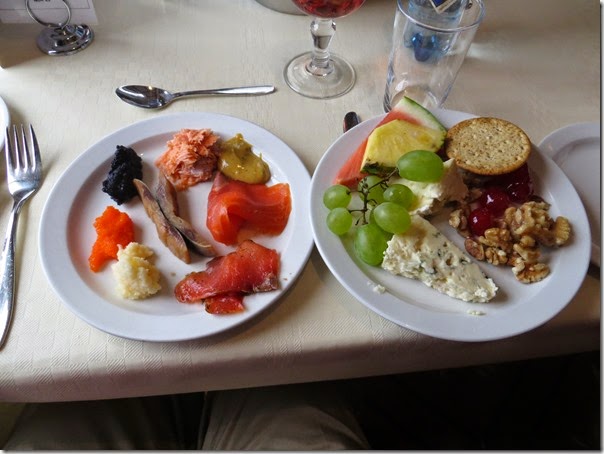 Dinner was a fantastic seafood buffet. Photo of plates after our first trip to the buffet. Somehow it doesn’t appear that Linda got the message this was a seafood buffet. As for me. I didn’t even realize they had the foods she picked I was so busy dishing out the different kinds of fish roe and marinated and smoked fish. Blind Bob. 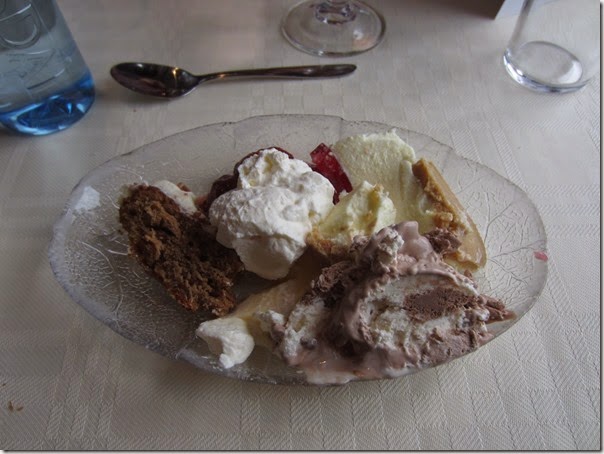 I can see that Linda made up for any lack of nutrition in her earlier helpings when it came time for her to visit the dessert table. 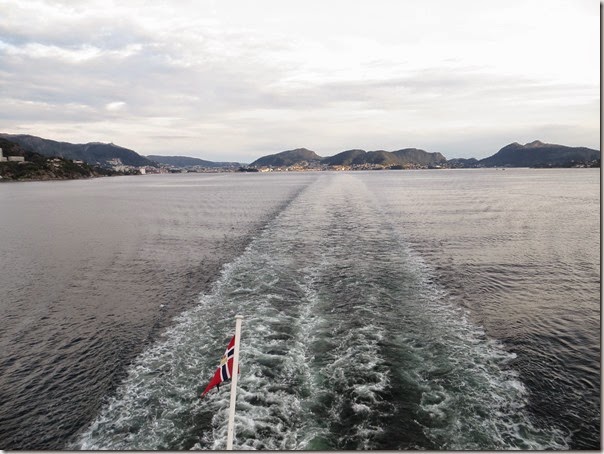 Saying good-bye to Bergen as we journey north and thankful for the opportunity to live one of our dreams.
Posted by Bob and Linda at 11:00 AM