Bergen, Norway, Cruise Ships Up the you Know what.


This town is over-run with with cruise shippers that fill the streets in the waterfront  tourist area that caters to them as there are up to seven cruise ships a day stopping here. We spent our day off the beaten path and had a good time without the crowds rushing to fit everything in the few hours they had ashore. Actually, I had to say that since we will, in a way, be those same cruise shippers next week. Just call it the pot calling the kettle black. Our maybe I am just punch drunk from being knocked around too much by those hordes. Confusicated Bob. 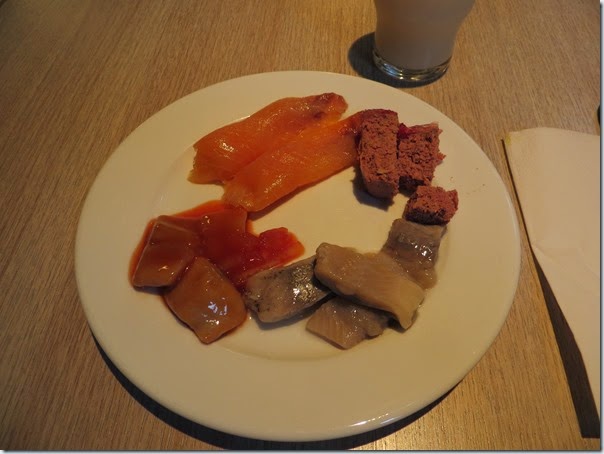 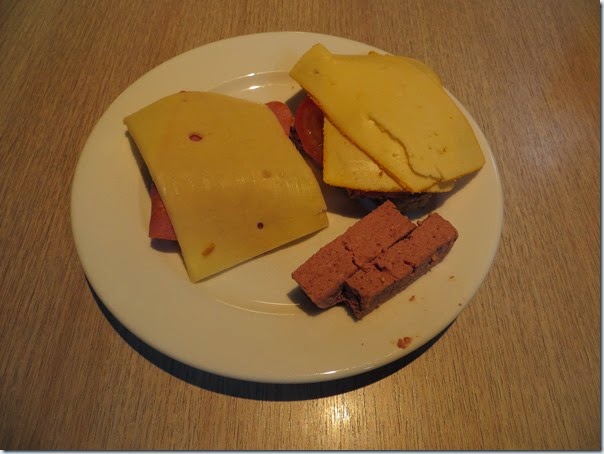 Breakfast course No. 2. Two nice pieces of liverwurst to begin with. Man could live on liverwurst alone it is so good, but again this is a demonstration of what the typical tourist breakfast should be. There are also two open faced sandwiches, or smorbrod as they call them here. Both use whole bread, the one of the right begins with several slices of tomato, has a seasoned cured pork for the meat and is topped with white Norwegian cheese. The one on the left also begins with tomato slices, then has an unpronounceable cured meat that is made from who knows what but has a hint of gaminess which provides a way to ensure the person eating it awake and ready for the day. The cheese is of the “stinky” variety and certainly compliments the meat. 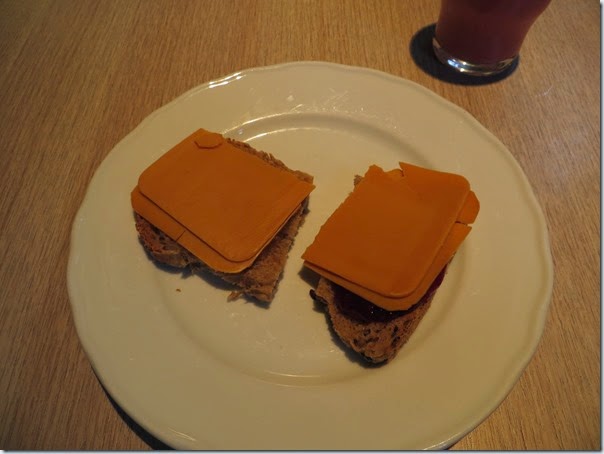 The third and final course. Once again we begin with slices of whole grain bread, then spread orange marmalade on one piece and raspberry preserves on the other. Top both with a generous slice of brown cheese and wash down with a fruit smoothie. Disclaimer: This is not strictly Norwegian because I didn’t slather at least a quarter inch of butter on the piece of bread before adding the marmalade and preserves. Even so, that is the way to eat breakfast.

At this point I must digress slightly and state that I noted American tourists eating a breakfast of such things as scrambled eggs, bacon, or breakfast cereal. Those are the things one eats in America for heavens sake. Why come to foreign and strange lands and eat the same old things you can have at home? Why not plunge into what the locals eat? The worst that can happen if you eat you like I recommend is that you go back up to your room and get sick to your stomach resulting in your losing weight which is what you probably need to do anyway. Dietician Bob. 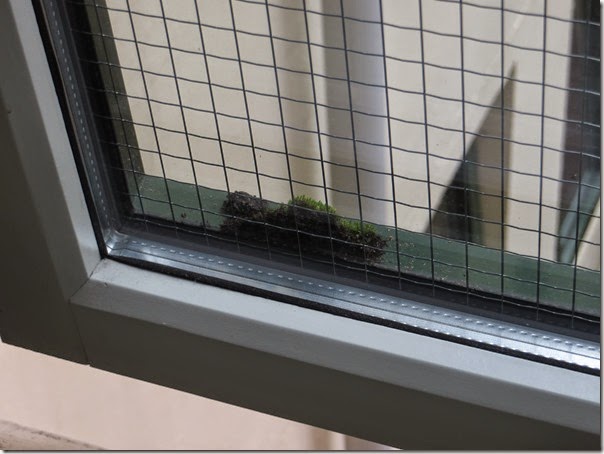 Just to prove how wet Bergen is, here is a photo of the moss growing on the outside of our fourth floor window. Bergen has rain on over 300 days a year, but would you believe it, today was one of the handful of days it didn’t rain. Disappointed Bob. Happy Linda. 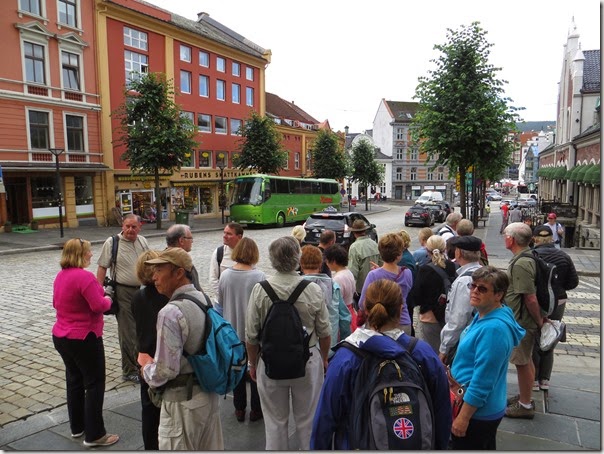 I took this photo just after our tour guide, Ulva, pointed out where the closest ATM was. Don’t ask me, I didn’t have any idea where it was either. Lucky for me, Linda is one of only several tour members who is actually looking at where that elusive ATM is located. Eagle Eared Linda. 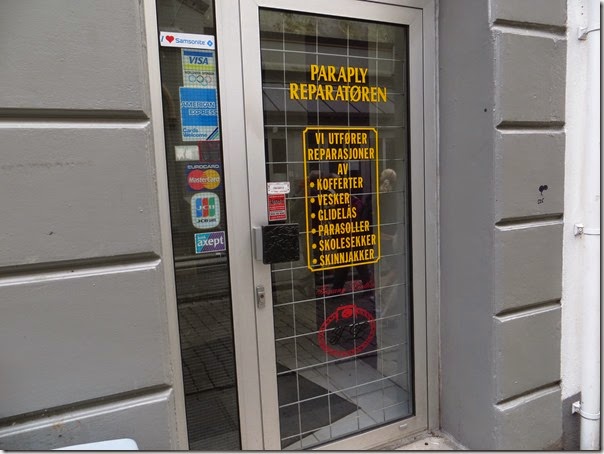 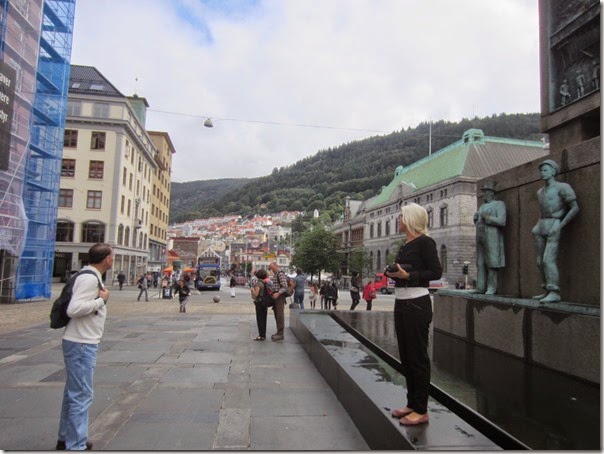 I have to believe there were times, Ulva, our Swedish tour guide felt like she was herding cats to get all of us to pay attention to her. It happens when you have a tour group where everyone has been on numerous tours, which this one has in abundance. In this case, at least Rick was kind of interested in what Ulva had to say. 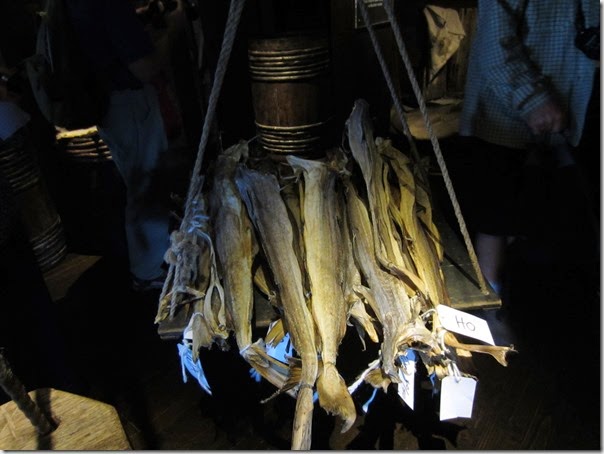 It always amazes me to discover what Linda has taken a photo of when I download her camera. It’s not everywhere you see a photo of a pile of 100 year old dried and salted cod. 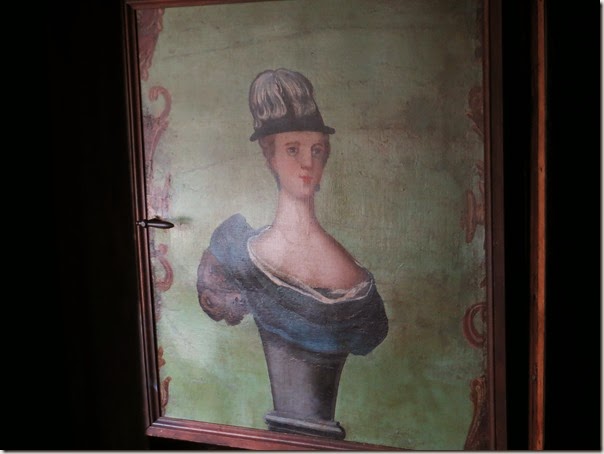 Or how about this one which was a painting on the door of a sleeping cubical in an old merchant’s house. 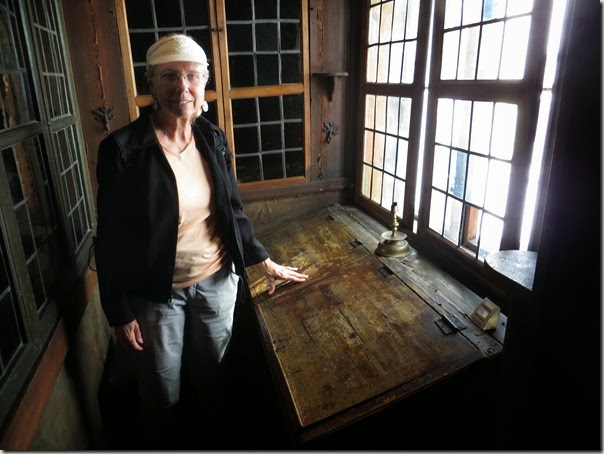 Linda at the accounting desk where the traders of hundreds of years ago kept their accounts. And yes, she had to try and open the lid of the desks to see what was in them. Some day her curiosity is going to get her into trouble. And something tells I will be the one who gets blamed for it. Can’t Win Bob. 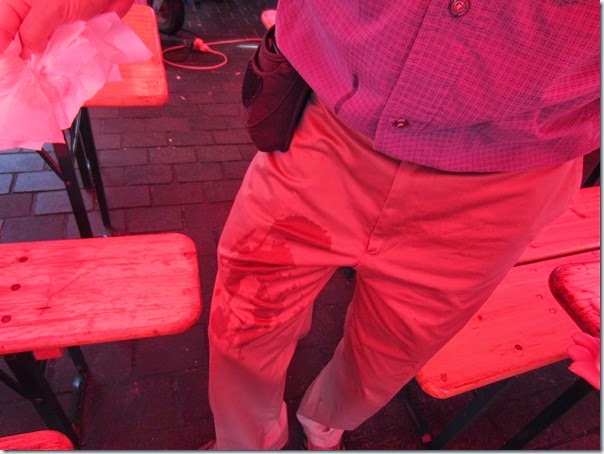 Nice guy that I try to be, I carried Linda’s fish chowder and rice plate to the table. I also spilled the broth from her chowder on my clothes. Clumsy Bob. 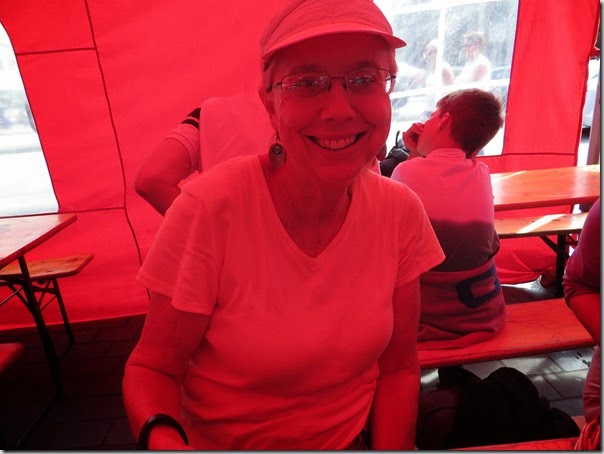 Ever wonder what you might look like if you were in that Schwarzenegger movie, Total Recall?  Thanks to the red tarp cover the eating area, you can see what Linda would have looked like. I offered to squeeze her real hard to get her eyes to bug out but she declined. Helpful Bob. 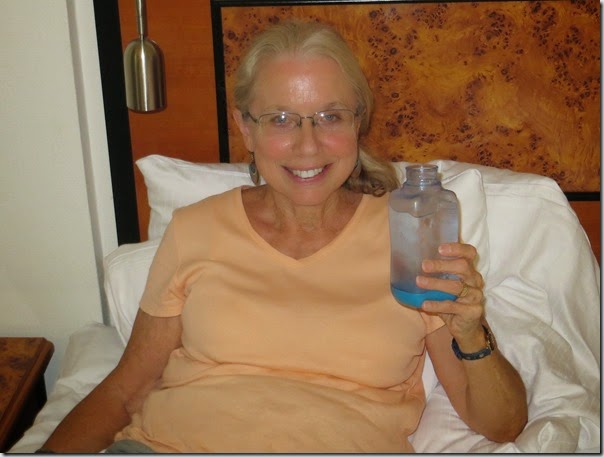 This doesn’t look like much, but to Linda it‘s a big deal. She’s holding her water bottle which is filled with ice cubes. Yes, unbelievable as it seems, this hotel has an ice machine. Not a very big, in fact a very tiny one, but an ice machine none the less. Happy Linda. 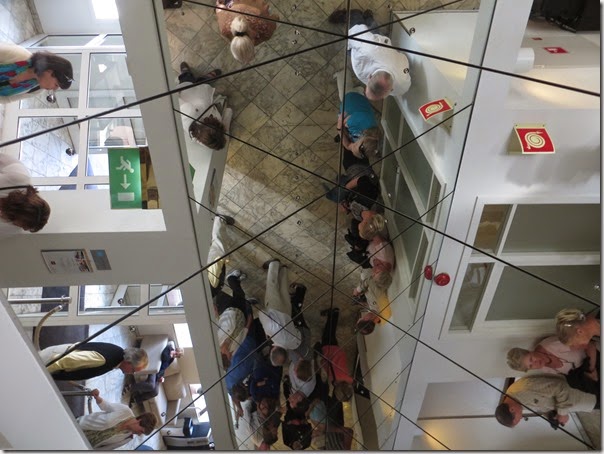 My entry in the weird photo of the day contest. Photo taken upwards towards the peaked mirror ceiling in the hotel waiting area as we gathered prior to walking to the location of our tour farewell dinner. What can I say, someone has to post things like this, so it might as well be yours truly. 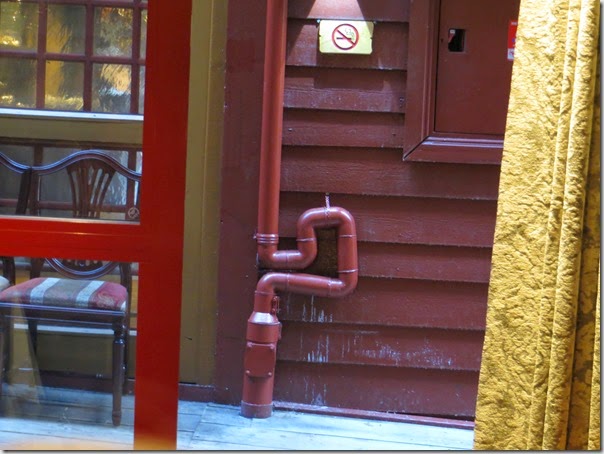 Looks like I might be on a roll with weird pictures. This interesting downspout connection was outside the room where we were having our farewell dinner. Maybe the plumber was working on a time and materials basis? 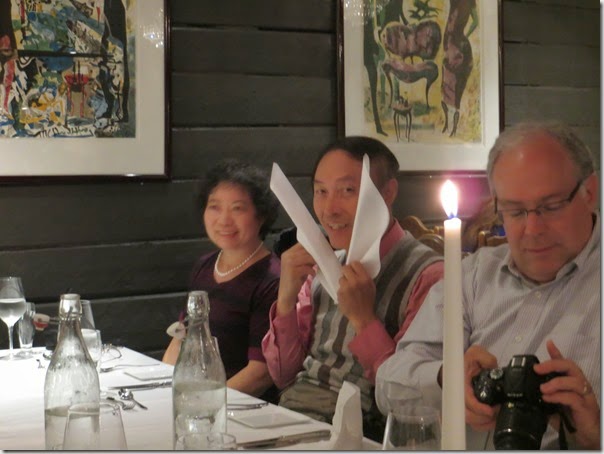 This a fitting photo to close our tour. We paid attention and learned more than we thought we could about Scandinavia. We had a lot of happy times, some of them being just plain silly with a fantastic group of people. And we took more photographs than there was space on our memory card. While the bright light in all of this was our wonderful tour guide, Ulva. And that we I refer to above is all 26 of us on the tour. And to them Linda and I wish safe travel back home and many more trips in the future.

We have a free day in Bergen tomorrow after the breakfast time good-byes, and once again, no rain is predicted. We started the trip with record breaking heat in Stockholm and are ending it with a record drought in Bergen, two consecutive days without rain. The long range forecast calls for decent weather along the coast for our trip next week, so Linda may not need to use all the Dramamine she bought, and that would be very nice indeed.

I’ll leave you with the following from Saint Augustine:

The world is a book and those who do not travel read only one page.