A Day in Awesome Oslo 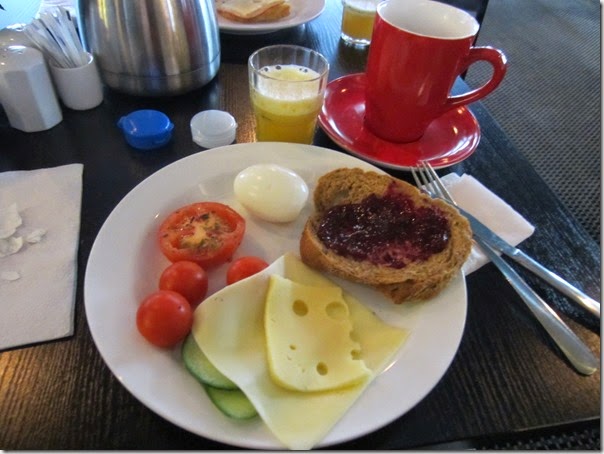 Linda is always taking a photo of her breakfast. With all the nationalities on board the ferry she indulged herself in a multi-nationality breakfast. This is part of the problem we face while traveling in Europe. The foods are not what we Americans would normally have for breakfast, but they are so good we find ourselves eating far more than we should. Blimp Bob. 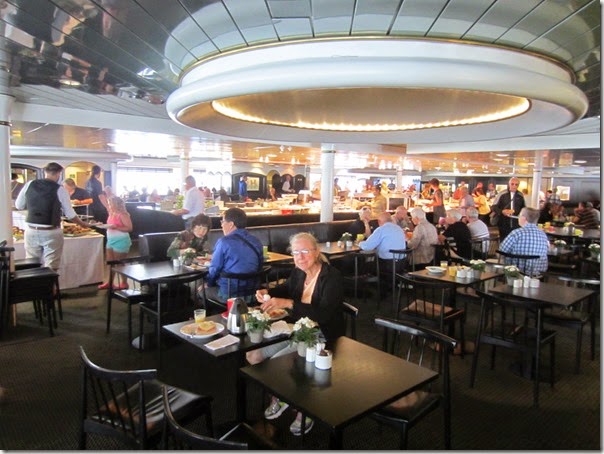 Just to give you an idea of what the breakfast area looked like. About 30 minutes after I took this photo and just before we finished eating at 8 o’clock the Italian and Asian tour group hordes descended on the buffet. Mass chaos ensued with people going both ways in line, pounding on the juice dispenser because they couldn’t figure out you pushed a button to get your juice, plus there were the families with the baby buggies, which over here are jumbo sized, clogging the aisles with a look of near panic on their faces. Now I know why some people like to cruise or take ships as they travel. The entertainment value is priceless. 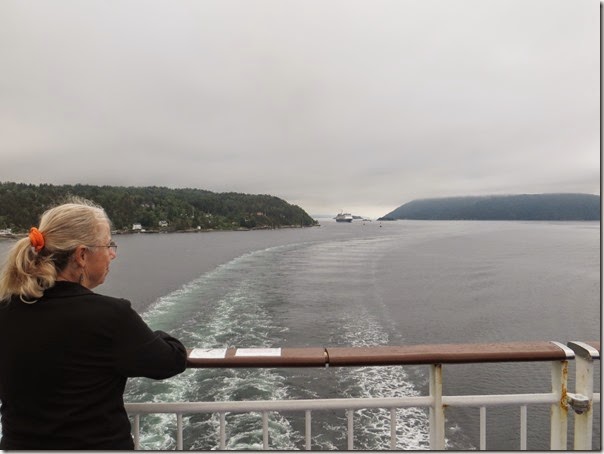 Beautiful model at the stern of our ferry nearing Oslo with two cruise ships in the distance. we spent the last hour as we approached Oslo on the outside decks of the ferry and it was a great experience. As you might guess, other than a ferry trip in Alaska this is my first experience of this type. Linda on the other hand is an experienced seafarer, having gotten seasick on a number of boats over the years. A hot stock tip is always buy stock in the Dramamine company before we take a trip that involves travel on water. Linda’s Dramamine purchases will cause the company’s sales to explode. 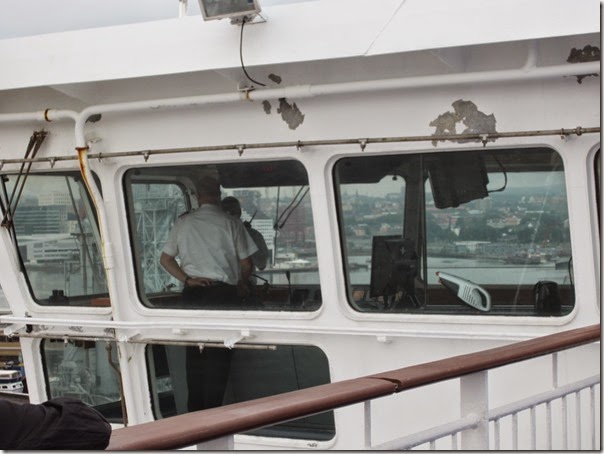 You were probably expecting photos of the Oslo harbor area like everyone else on our tour was taking. I would bet several of them took a hundred photos of the Oslo Opera House between them. But as readers of Because We Can know, we have been known to look left when everyone else is looking right. Hence you get to see the ship’s captain at the helm as he guides this enormous ferry into dock. 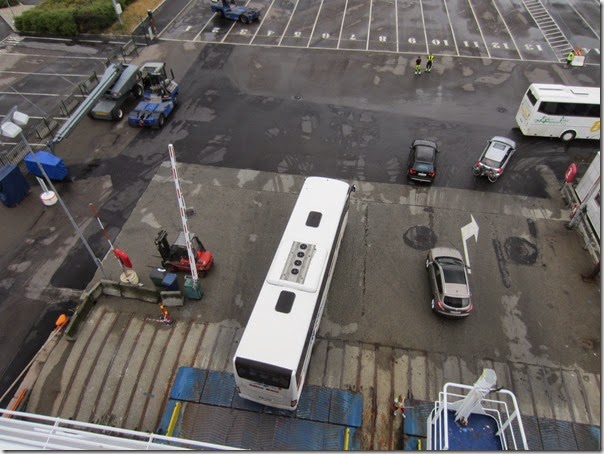 Where else but here do you get to see the photo Linda spent 15 minutes waiting to get. The one of our tour bus exiting the ferry. It’s a wonder we have any readers left after posting things like this. On the other hand, Linda is happy and that makes Bob happy. Poor Readers. (Now that’s a first.) Smiling Bob. 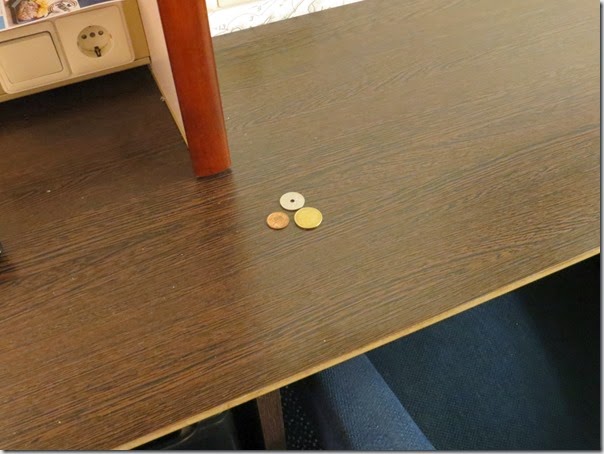 We left all the Danish Krone we had left, all 22.50 for the housekeeping staff. We were concerned we might have taken too much money out of the ATM’s in Sweden and Denmark, but since everything is so expensive in both countries it was is not that hard to spend it all. All I can say is that if you travel on the cheap, Scandinavia is most definitely not the place to come too. On the other hand, it has been worth every “Kroner” we have spent and we will be back again. At least to Sweden and Norway. In our book, Denmark, especially Copenhagen, is a slum and will never again see us. As always, your opinions may vary. But to us, compared to Sweden (Stockholm) and Norway (Oslo), Copenhagen is a dirty, litter ridden mess. 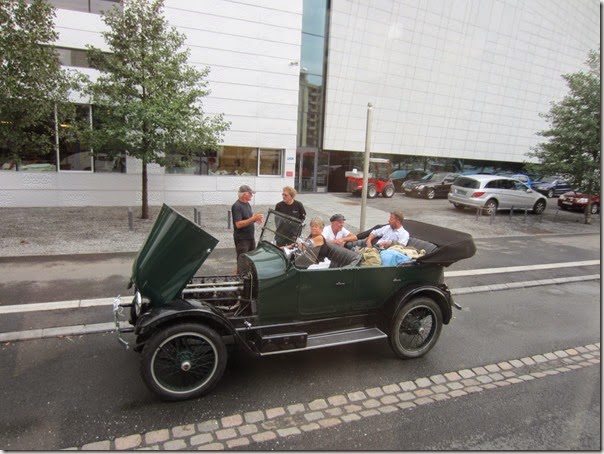 There were several old cars that we saw exit the ferry. During our bus tour of Oslo we saw this. This is not good, especially with the very dark and threatening rain clouds in the distance. We don’t know what happened to them, but a short time later the sky opened up and a massive downpour occurred. Guess the old way is not always the best way. Philosophical Bob. (Wow, that might be a new one.) 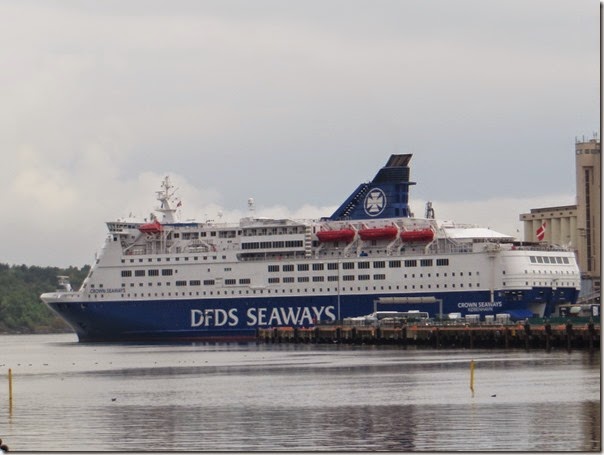 Knowing everyone, or at least me. wants to see a photo of our ferry, here it is. It held nearly 1700 passengers and several decks of cars, busses and semi-trailers. As an observation, the on board wi-fi sucks. And that is what everyone says is the situation with the Hurtigruten ship we will be on next week. Time will tell. 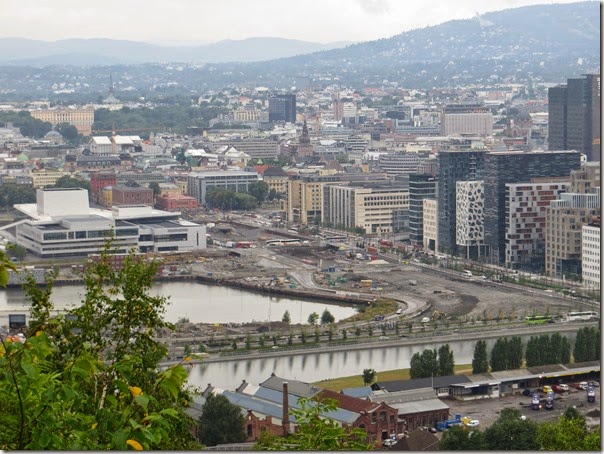 Oslo is an amazing town, as is the whole of Norway. With for all intents and purpose no unemployment, with the the highest standard of living of any non middle east  oil country, they are practically begging people to move here and they are. The citizens have free health care and education, miniscule cell phone and high speed internet bills and a happiness index the best in the world. Makes our country with its rampant crime and poverty look more like a third world country, which is where it is rapidly heading unless major changes are made and the politics of money are wiped out. In Scandinavia ideology is separated from politics. In our country ideology is politics to our everlasting shame. 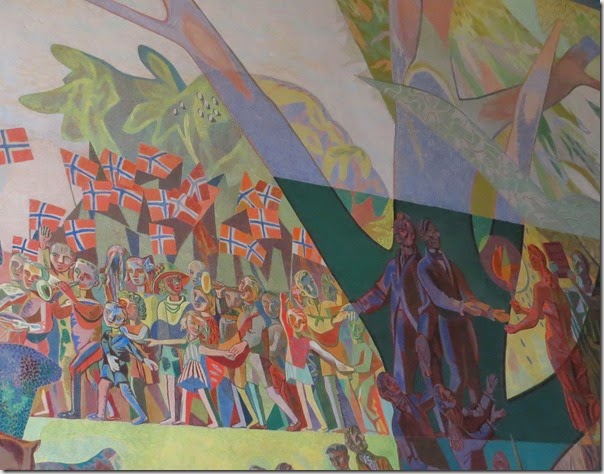 A mural in the Oslo City Hall depicting the laws being given to the politicians who use them for the benefit of the people. The people in turn pass them on to their children ensuring the life of their children will be better than theirs. That’s the opposite of our country where the Politian's ensure the laws will be used to benefit whoever gives them the most money. 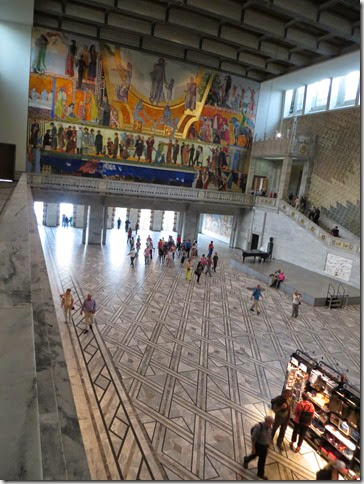 The main hall in the Oslo City hall where the Nobel Peace prize is awarded. Here it means something. In our country is creates a blizzard of – fill in the blank – didn’t deserve to get it. I am glad the rest of the world doesn’t think like many Americans do, it means there truly is hope for humanity. 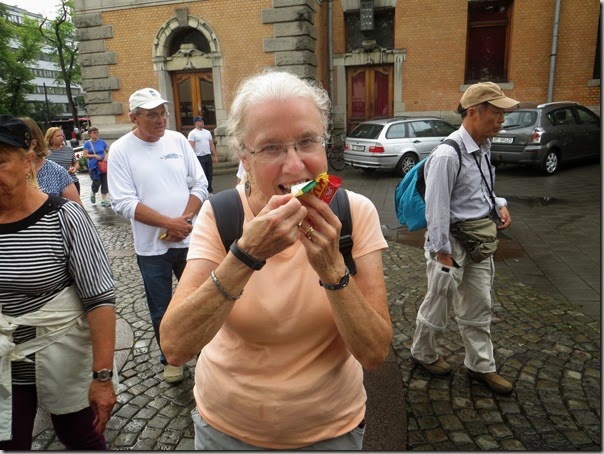 Linda enjoying a Kvikk Lunsj chocolate bar. Everyone in the group got one, which  is the Norwegian national chocolate bar they have when they hike. The universal response was how awesome they were compared to the Hershey bars we have in the states. Travel, it even does the taste buds good. 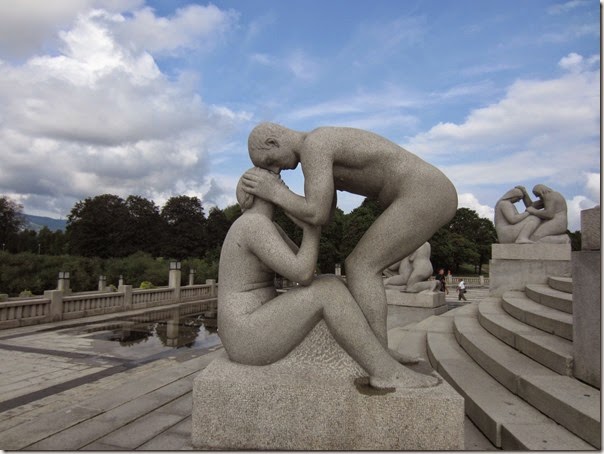 A visit to a magnificent sculpture garden was the highlight of the day for us. 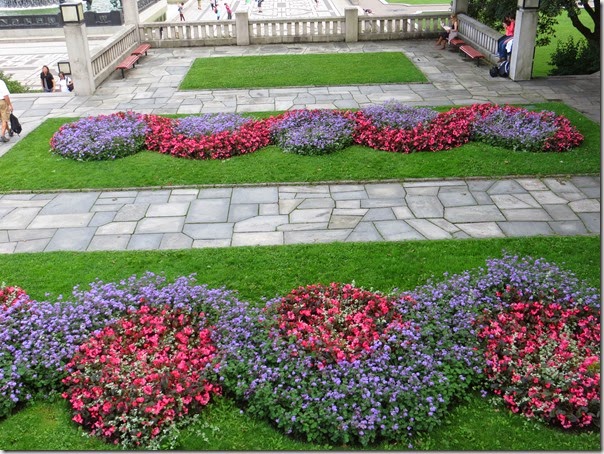 The way they planted the flower beds was interesting. Many of the plants were the same as we see in the states, however the way they used they together had you admire the artistry. Unfortunately our poor attempts at photographing them fell woefully short of revealing their beauty. 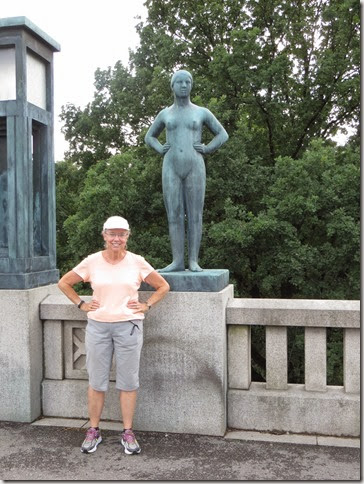 Our kids know this “mom pose” only to well. 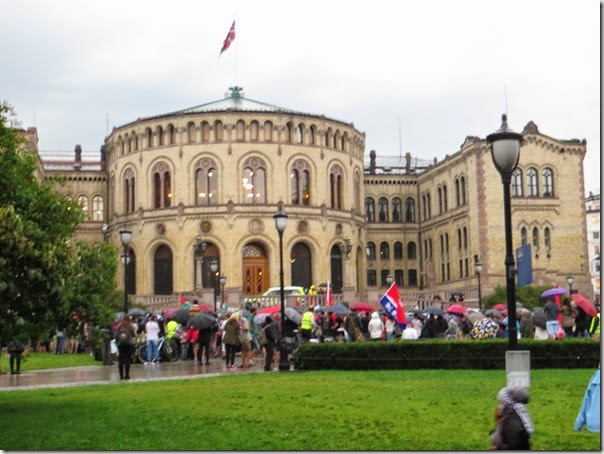 A protest in front of the Norwegian Parliament Building. A little rain during the day didn’t put a damper on our activities and neither did it to theirs. 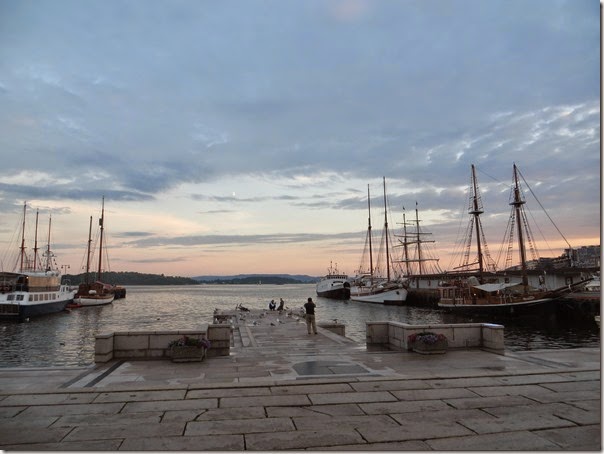 We end the day with the sun setting over Oslo harbor to cap a wonderful day in a city we have barely seen but already love. May unexpected pleasures also be happening to you.