Trolling Along the Norwegian Coast 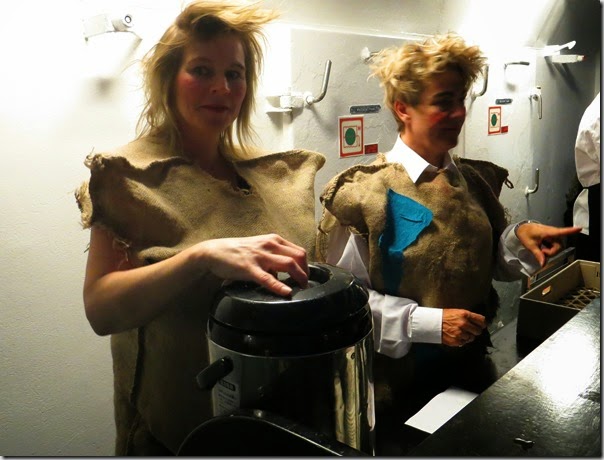 I have to say this here, as Miss Linda Accuracy would object if I portrayed this as happening after midnight which would make it suitable for today’s post instead of  its happening just before midnight as it actually did. Confused? So an I. Back to what I wanted to say, Very late last night we were about to enter Trollfjorden, i.e. the troll fjord, so troll soup was served on deck 7. 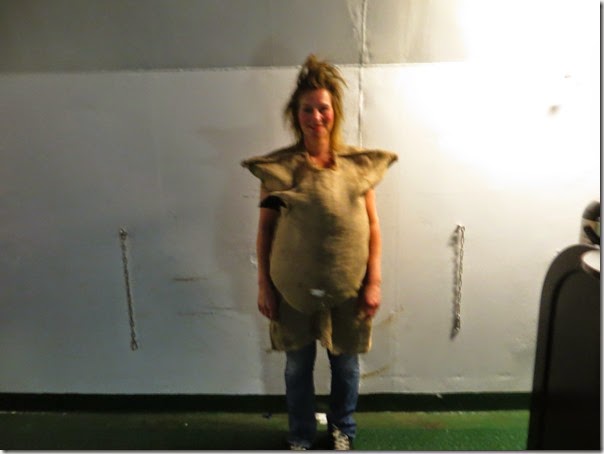 Trolls are extremely elusive creatures, but after we had consumed our troll soup, served by trolls, I was able to take a somewhat blurry photo of this troll as we were drinking our troll grog out of our troll grog mug. (The ways they come up with separating passengers with their money is endless, but I must admit this one was worth every Kroner, and it was a considerable number of Kroners.) Conclusion: This has to be the most expensive country on earth. 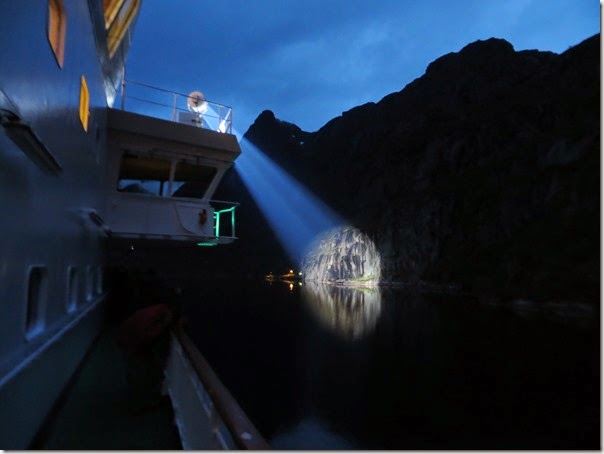 The soup and grog were followed by an amazing low speed voyage up the sheer walled Ttrollfjorden. At the end of the fjord the ship did a 360 degree turn on its axis barely missing the sides of the fjord. It may have made for a very long day, but it made every extra minute of the day worth it. A very tired but very happy Bob and Linda. 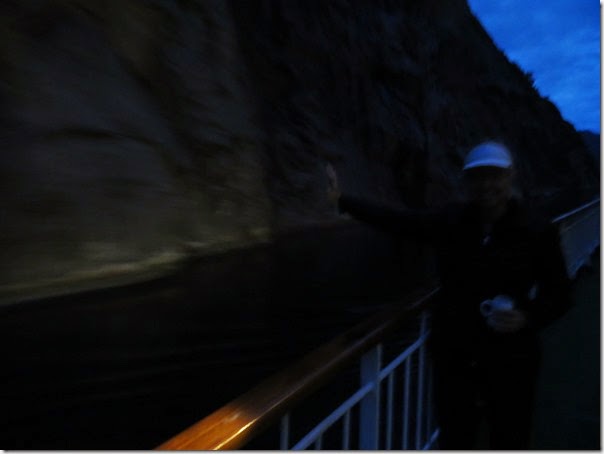 Another blurry photo, but after midnight don’t expect much. Linda couldn’t really reach out and touch the sides of the fjord, but fortified with Fjord grog, note the mug in her hand, she tried. Too bad you can’t see the awesome smile on her face but I can tell you it was there. lucky Bob. 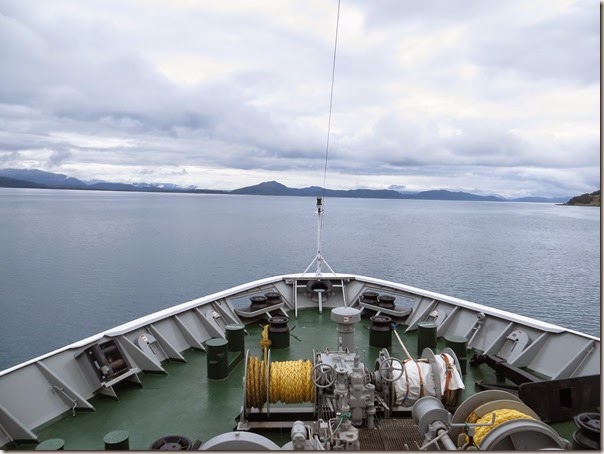 Don’t think we slept in, we didn’t as there is simply too much to see and do. Today proved to be a day where the clouds were never far above the surface of the water,  where the temperature never got above 50, yet a day where we once again had a great time. 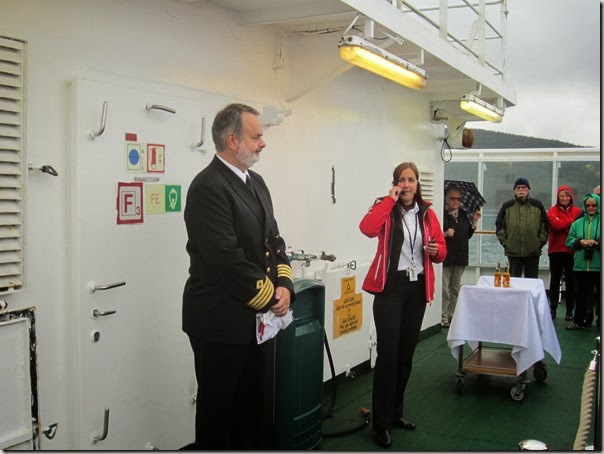 The Ship’s Captain getting ready to preside over the Crossing of the Arctic Circle ceremony. 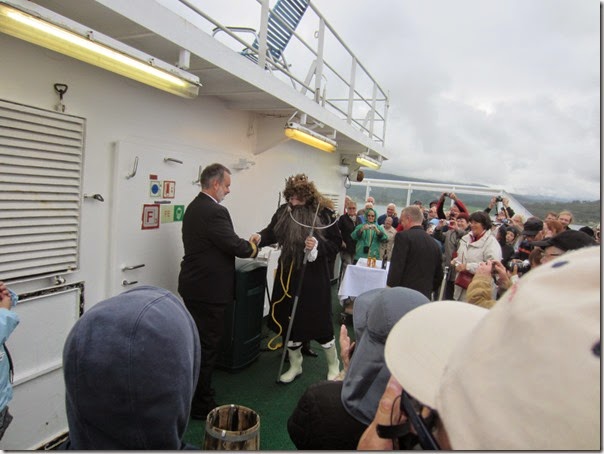 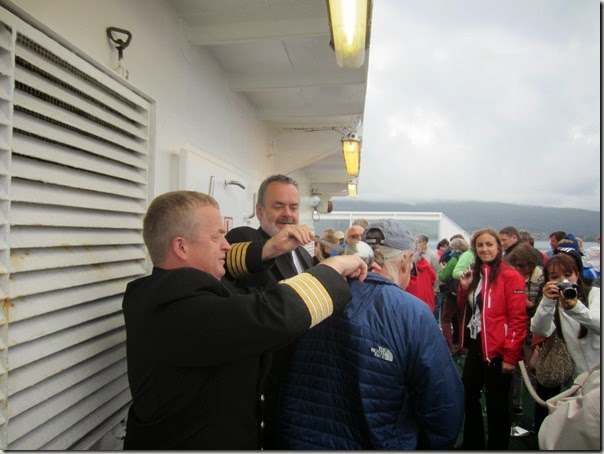 The Ship’s Captain dumping ice cubes down this writer’s back.  While the discussion was all in Norwegian, I believe they said something to the effect, “A long gray haired American hippie, Lets give him an an extra large dose of ice down his back.” Which was exactly what I got. 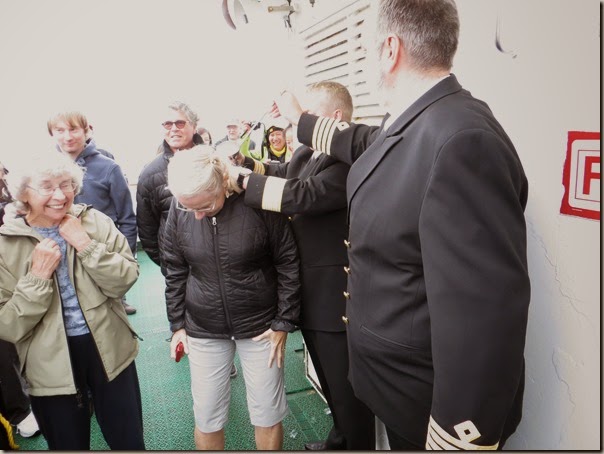 Again, I admit my Norwegian is slightly suspect, but I believe I heard something to the effect: Scandinavian woman who is beautiful wife of old long haired American, go easy on her and maybe she will dump him and sit at captain’s table. Unfortunately due to the scream Linda let out at this moment I was unable to hear any more the conversation if indeed what I thought was said was even remotely close to what was actually said. Bob, the Incompetent Translator. 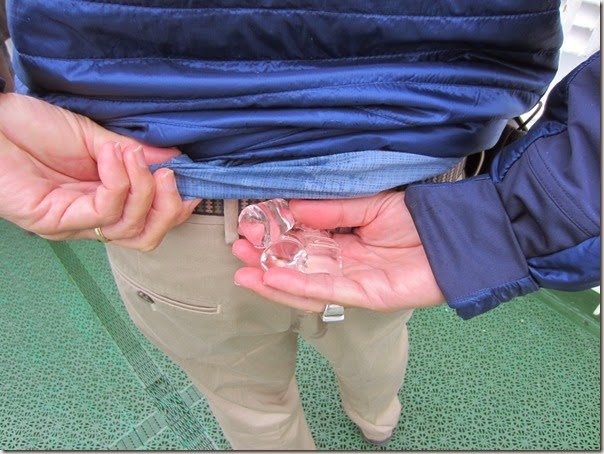 Like I said, I got more than my share of ice down my back. and not only ice but also a healthy dose of ice water. The back of my pants being soaked proved it. Did I get sympathy from Linda? Heck no, all a got was some giggling followed by a quite loud laugh. 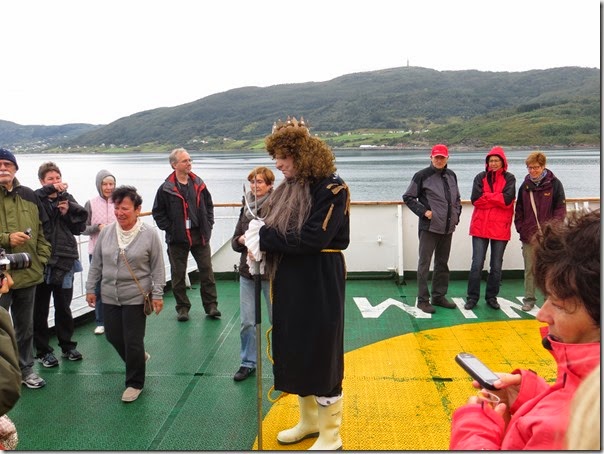 King Neptune getting ready to return to the sea. 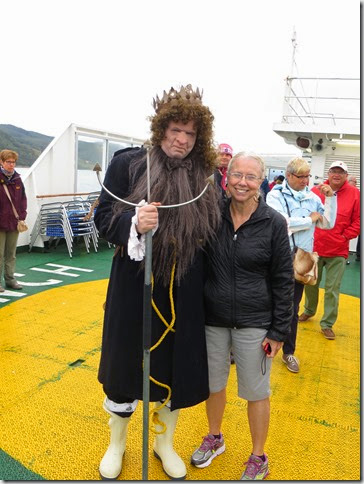 I was afraid for a second Linda had decided King Neptune was a better catch than I was. After thinking about it I realized the first time he did something wrong and she tore into him like she does to me, he’d throw her out of the water right back up onto the ship’s deck. 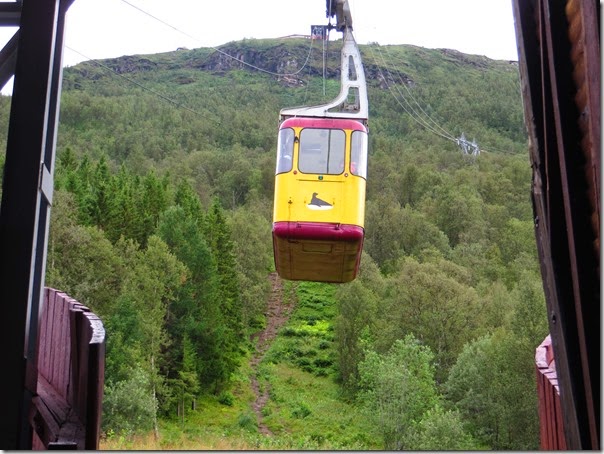 In Tromso we took the cable car to the top of the mountain overlooking the town. 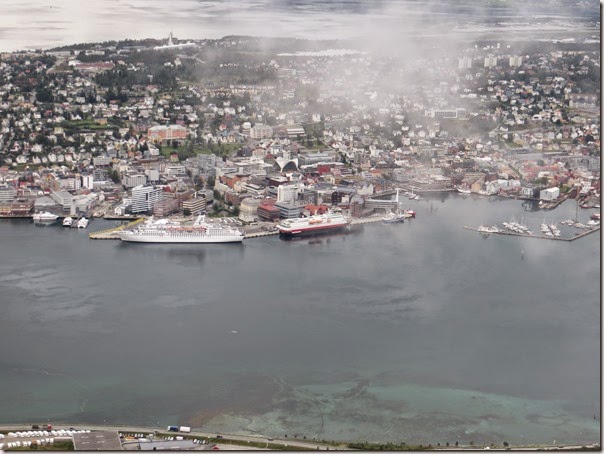 There were a few clouds that floated past blocking our view of the harbor, but luckily shortly after we arrived the wind picked up and the clouds dispersed. The little ship  in the center of the photo is ours. 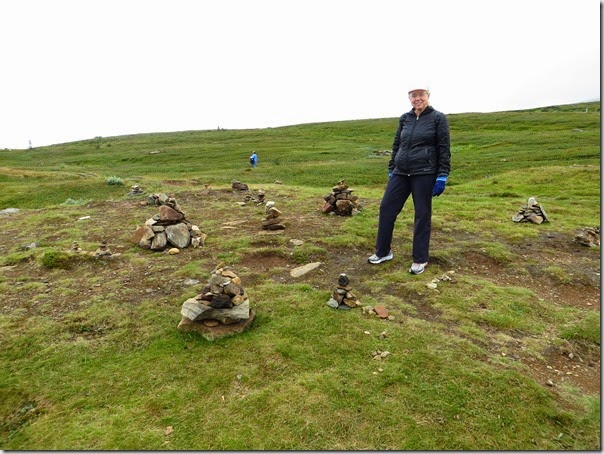 Linda was excited to see that even though there were no trees, cairns were sprouting up everywhere. 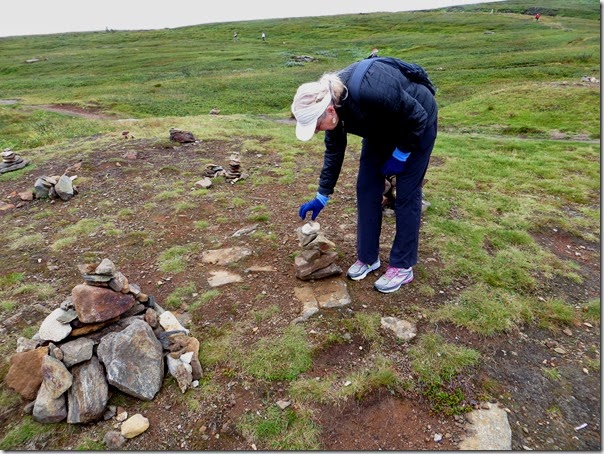 Linda added a couple of small rocks to this cairn. 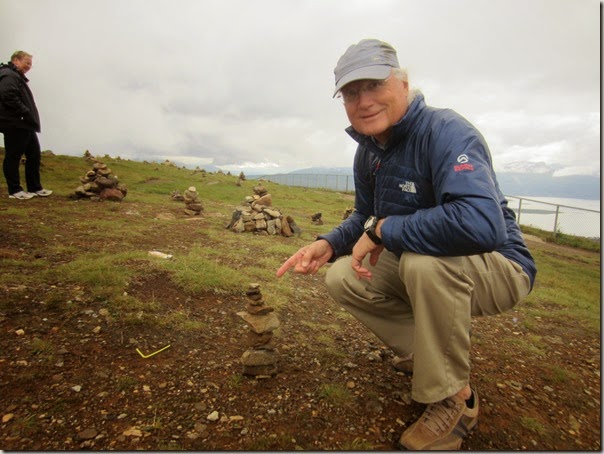 Just to show off my superior intellect and to destroy any lingering yearnings she may have had for King Neptune, I built this cairn for her. She even noted that mine had the largest rock in the middle of the tower. It takes a lot to impress Linda and some day I hope to eventually do something that will impress her. 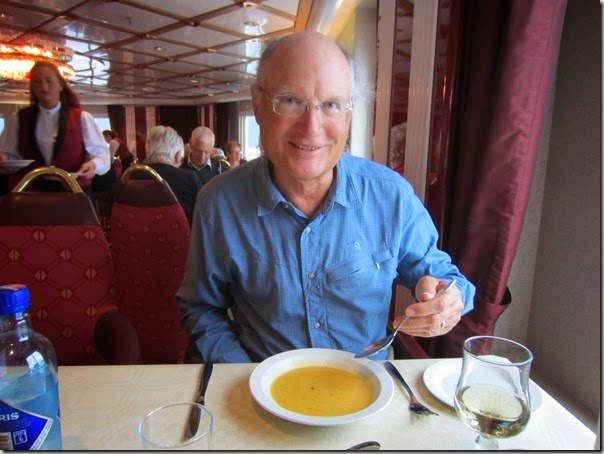 This is what I will miss most when we leave Scandinavia. I never though I’d say it but I just can’t get enough of their carrots, which is coming from someone who eats carrots because my mom once told me they were good for me, but that doesn’t mean I ever liked them. And here I am about to dig into a bowl of carrot soup that I know will be absolutely delicious before even tasting it. Linda thinks the secret to their carrots is a combination of the soil they grow in and the way they cook them. What ever it is, it makes Bob a happy boy. 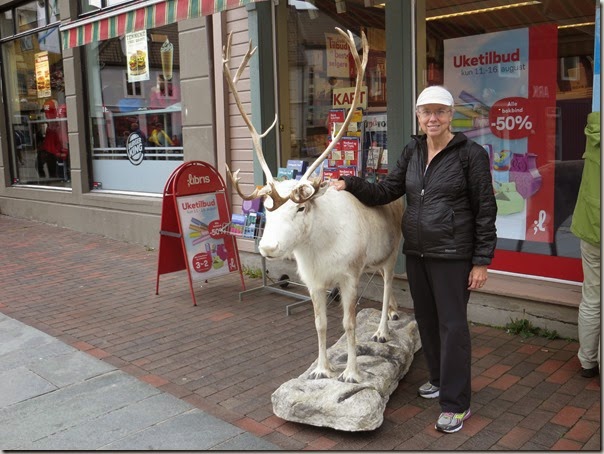 Linda on the other hand can just be walking down the street and the first thing I know she is as excited as a little kid. Maybe that is what is wrong with too many people, they think they need to act like grownups all the time. Thank goodness for little girls that stay little girls. Lucky Bob.