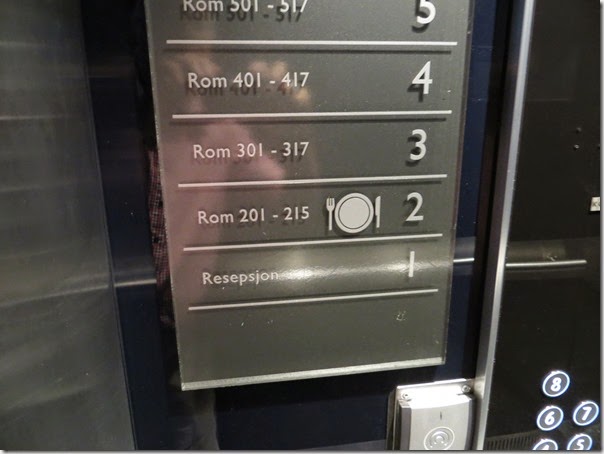 When I suggested she might want to push the button for the second floor, I was quizzed as to why she should do that. I said, “Because that is where the breakfast room is.” And immediately I was interrogated as to why and how I knew that. My response was, “Because that is what the elevator buttons show.” All I heard in reply was, “OH!” I got off the elevator without saying anything. Chuckling Bob. 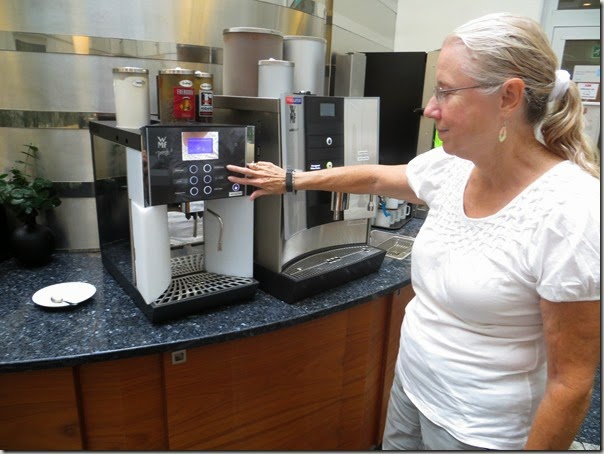 A re-enactment of an earlier event. Linda was definitely on a roll this morning. Placing her coffee cup under the coffee machine, and still being not fully awake as the incident in the elevator proved, she knew she needed a double espresso to bring her back to the land of the living. So she pushed the button on the coffee machine twice. Unfortunately for her it was for the regular coffee instead of for the espresso. Moments later coffee was pouring down over the sides of her cup as the machine dispensed two regular cups into her one cup. Quickly looking around and seeing no one watching her she dumped the overflowing coffee cup into the overflow for the water dispenser, while the last of the coffee came out of the machine into the little tray at the bottom. Then she pushed the espresso button twice and acted as if nothing had happened. And you wonder why I write so glowingly about the woman I married. Appalachian Hill Girls are the best. Awesome Linda. 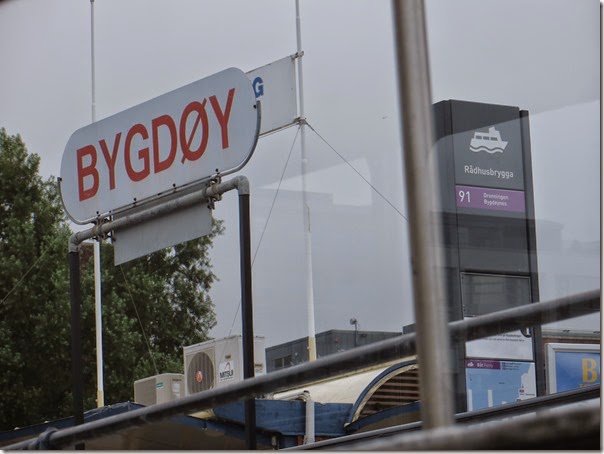 We took a ferry to another island this morning. Linda was all concerned about not being able to get back, getting lost, taking the wrong ferry, or doing something else stupid like she had been doing all morning. Of course all the foregoing mistakes were going to be my mistakes, not hers. To alleviate any fears she might have I took a photo of the sign which told which ferry we needed to take to return to the hotel in the afternoon. She was one very happy girl. What I didn’t tell her was that we would be returning from a different ferry dock and this sign was meaningless. Confident Bob. 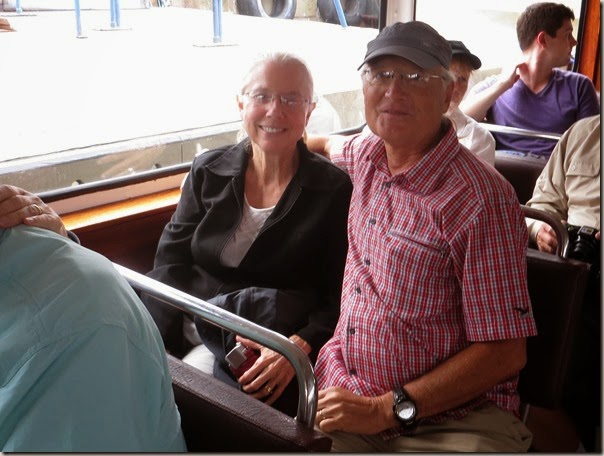 Photo of Linda and a dork on the ferry. I was told I didn’t smile and looked stupid. Being a nice guy I won’t point out the woman beside me looks bald. Nice Bob. 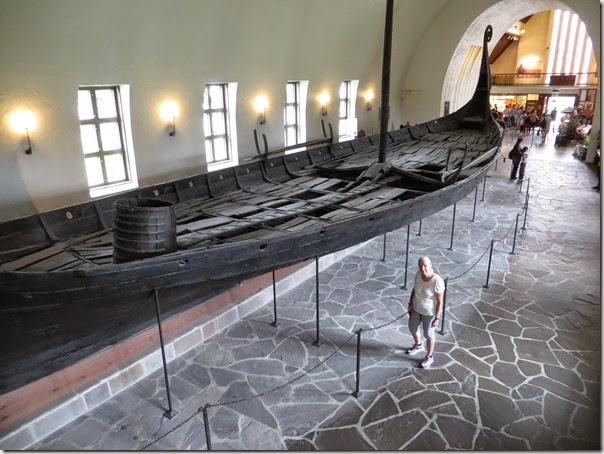 Bear with we a moment on the is one. (As if you had any choice) This is a slightly after the fact photo but that is okay. We were in the Viking Ship Museum when Linda rushed up to me and said, “I just had an experience with a ghost! I was in that room looking at the artifacts of those two women and something was there with me. The hairs on my arms stood up. It was amazing.” 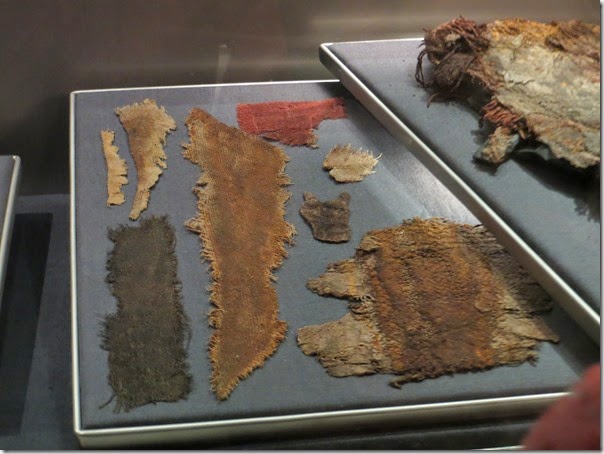 Maybe on other websites photos have to be in order, but since this is mine I can do whatever I want. These are the scraps of fabric two Viking woman were wearing when they were buried in the ship in the previous photo. Apparently one of them was a “very” important woman as the extreme wealth of objects in the ship attested to. Linda knows without a doubt she has a connection to one of those two women. Believe what you want, but Linda knows it is true. 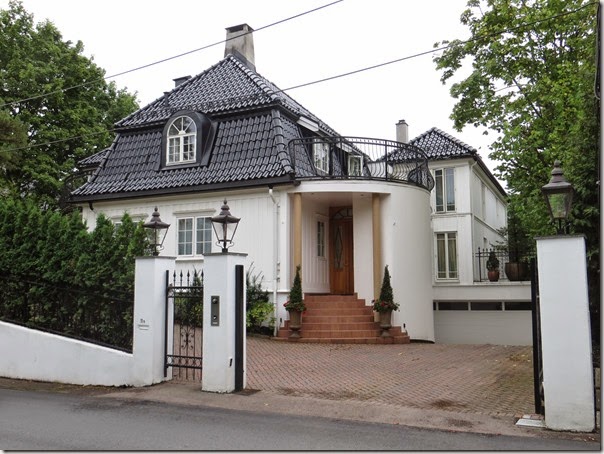 Norwegian home in Oslo. The wealthiest country with the happiest citizens. Taxes provide free most everything in terms of basic necessities. If I could reset the clock and be in college I would learn Norwegian and move here and enjoy a much better life than I could in the USA. The people who think we are the greatest nation in the world just might be delusional. And I am not anti-American, just pro being open minded. 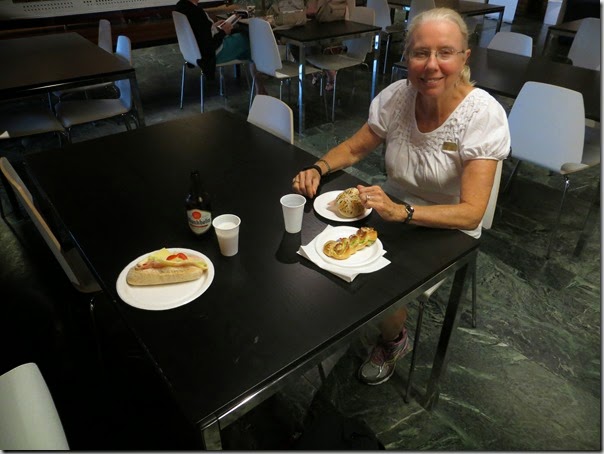 Our $35 dollar lunch. I guess I left out this being one of the most expensive countries to live in, or visit for that matter. Life is a number of trade-offs, we have to decide which ones we want.  Somehow it strikes me that living in a country where the CEO of McKesson, a Calif.-based medical supply company, can make $131.2 million in a year when the US has the world’s highest medical costs, isn’t the paradise its cracked up to be. In the USA the motto is: them that have the most get more while the rest of us suffer. (Rant over. But seeing how people in other countries live makes me want to put into words what I see.) 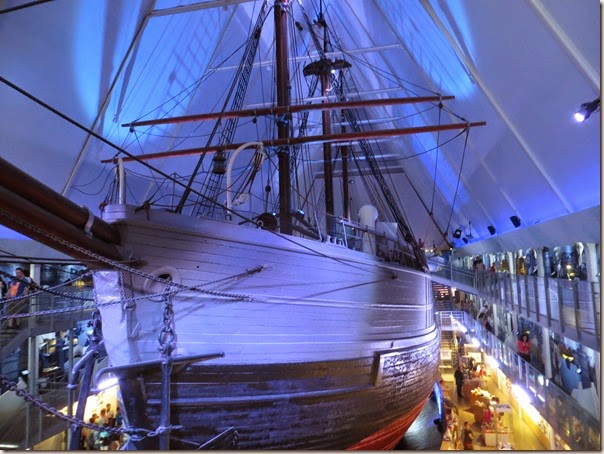 Another museum, a polar expedition ship. Not to belabor the point but we find the museums in Europe to be on average, superior to those in the USA. I have to think it comes from the mindset over here museums are for the people while in the USA it is to show how great something is. 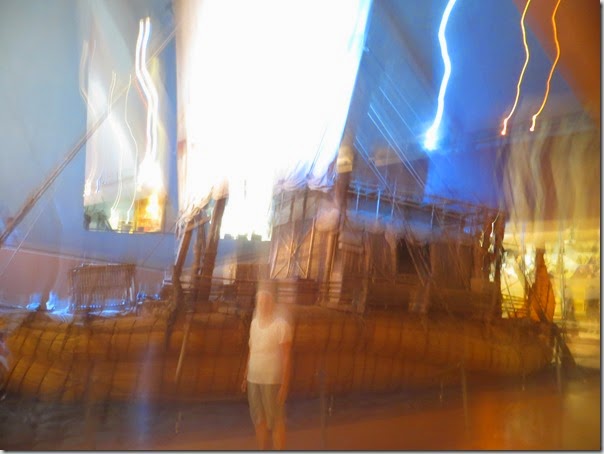 This is the perfect photo to post of the Kon-Tiki, mainly because you can’t tell the vessel in the photo is not the Kon-Tiki. They called it the Kon-Tiki Museum, you go in the entrance and just inside is what you don’t see in the photo. Chagrined Bob. 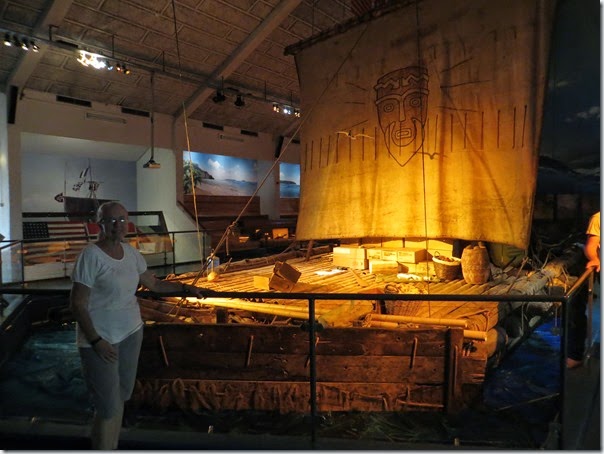 Linda in front of the real Kon-Tiki. 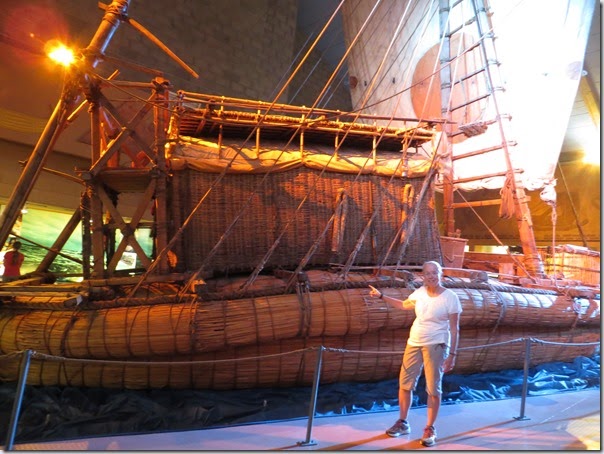 Linda beside the replica of the Kon-Tiki Ra II, which we originally thought was the Kon-Tiki. Stupid Americans don’t even know what the real Kon-Tiki looked like. Linda doesn’t have an excuse because when we entered the museum she was telling me about how she remembered reading about the Kon-Tiki in National Geographic Magazine when she was a little girl. That is surprising since the voyage of the Kon-Tike took place before she was born, but I have learned to never doubt what she has to say. Wise Bob. 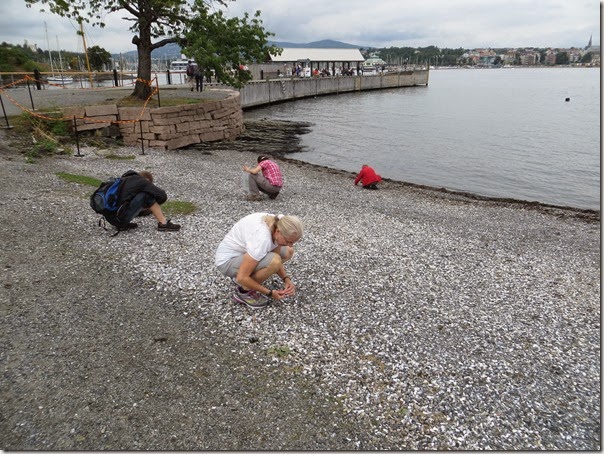 Waiting for the ferry back to Oslo I took a photo of a number of kids hunting for shells. Interesting, don’t you think, that one of those kids bears a remarkable resemblance to Linda. 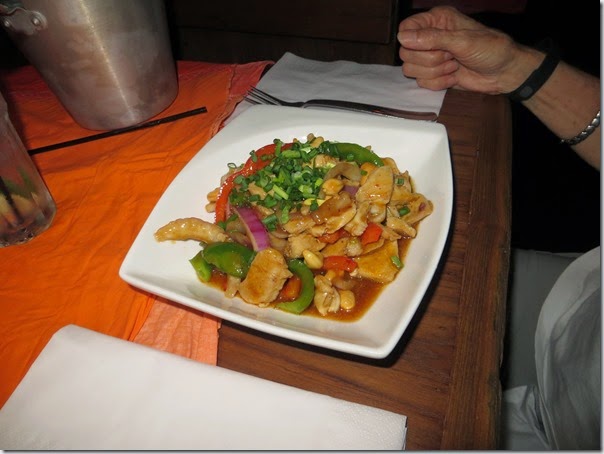 There has been a singular lack of food photos in today’s blog.To rectify that here is Linda’s dinner dish, which was some kind of Thai chicken dish that was eaten with much lip smacking and accompanied with assorted aah’s and yumm’s. 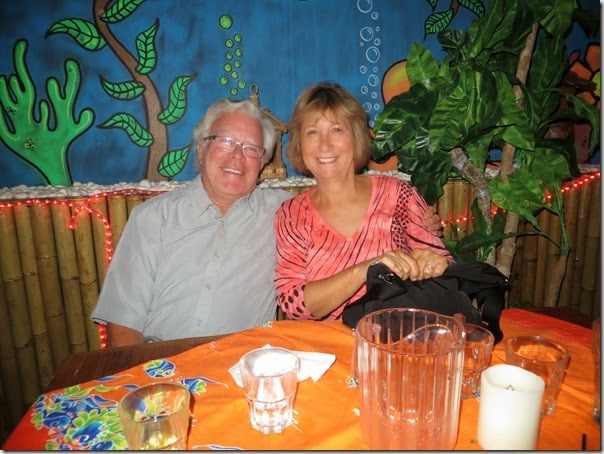 When people ask us what the best part of going on a Rick Steve’s tour is, the answer is easy. it is having fun with the other tour members. Tonight we exited the hotel, then stood there while trying to figure out which was the best way to the Thai restaurant we wanted to eat at. Meanwhile Houston and Von from the tour were doing the same thing. Imagine our surprise when we discovered we planned to eat at the same restaurant they were. And as might be expected, the rest of the story is that the four of us had a great time eating together. Sara N. Dippity strikes again.