To the quaint town of Quedlinburg, Germany 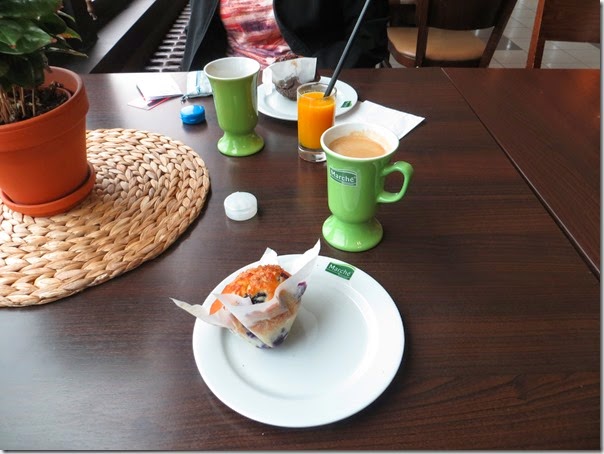 We love the breakfasts in Germany, but this morning we had to settle for the French version of breakfast. Prior to leaving for the Harz Mountain area we walked over to Schonefeld Airport to grab a bite to eat and came up almost empty handed other than a muffin and a cup of coffee. So maybe Linda just had a double espresso, and even in my case, though I settled for just a cup coffee it was great. We really love the coffee in Germany and France. 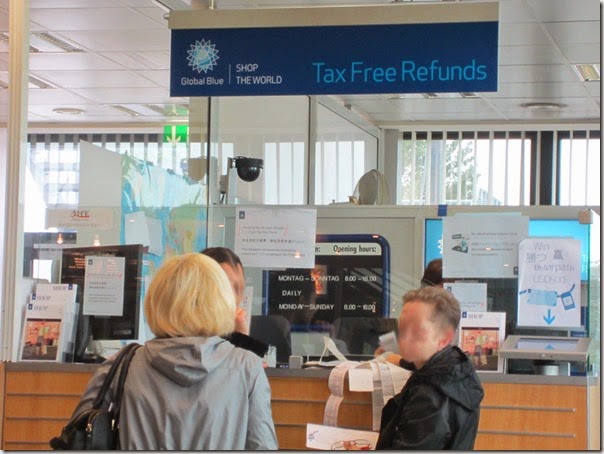 While we ate there was a steady line at the tax refund counter just a few steps away from our table. Linda wasn’t much of a conversationalist as she watched the piles of receipts being turned in. Some people had so many they could barely push them through the slot in the glass. I hope it didn’t give Linda any ideas about shopping.

Traveling to Quedlinburg near the Harz Mountains today and it took us a while to get our German train travel legs under us after having worn our Hurtigruten ship’s sea legs for the past week. We needed to buy our Quer-Durchs-Land-Ticket which allows you to travel all day on trains for one price. Bob doesn’t need no ticket counter, he can use the machines. Oops, there is a problem with this machine, it didn’t sell the type of ticket we wanted. Finally figured out it was a VBB machine, not a DB machine which made it great for buying local tickets but for long distance tickets. So much for my impressing Linda with my knowledge of German, since Linda selected the English language option in the end. 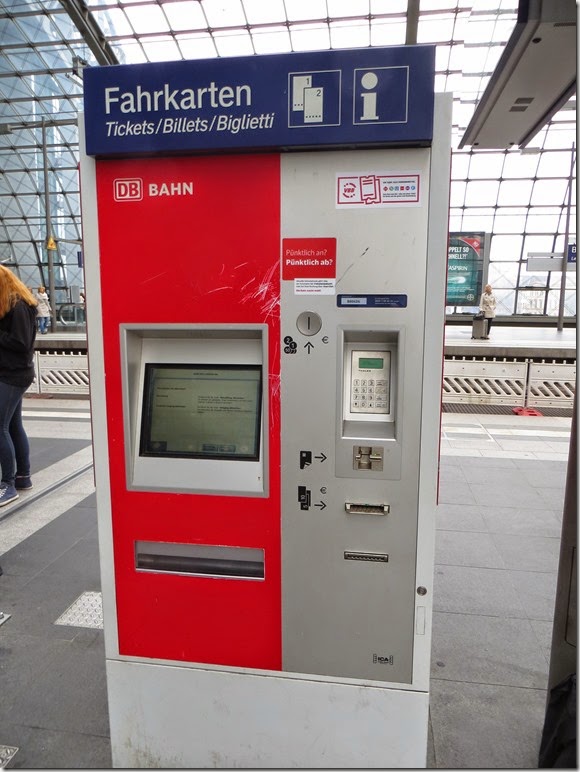 At least we were now in front of the right machine, then it was a simple matter for Linda to push the English language button once again which made it easy for me to buy the ticket we needed. They do have ticket counters where agents can help those who get easily confused by the machines, however some of us are so confused we are confused about being confused which just leads to more confusion. Poor Linda. 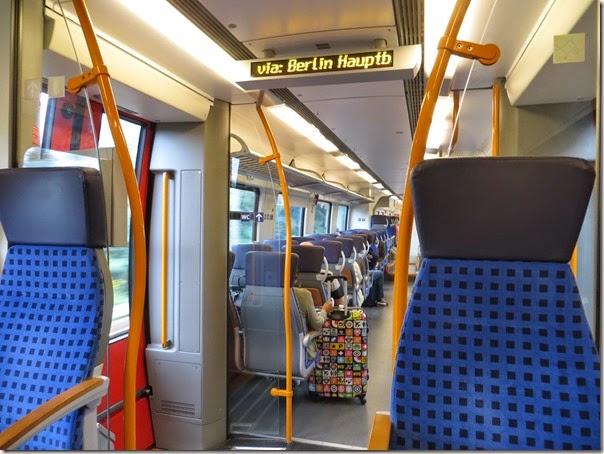 Finally, ticket in hand, we got onboard the train we thought we needed to take in order  to begin our trip. We were going from Shonefeld Bahnhof to the Ostbahnhof  in Berlin where we would transfer to the train going to Quedlinburg. We got to the track and there were two trains, back to back going in opposite directions, but asking the conductor got us on the one going to Ostbahnhof. I thought it was odd the number of the train we were on wasn’t the same as the train we wanted, but since it was at the station and going where we wanted to go, we got on. 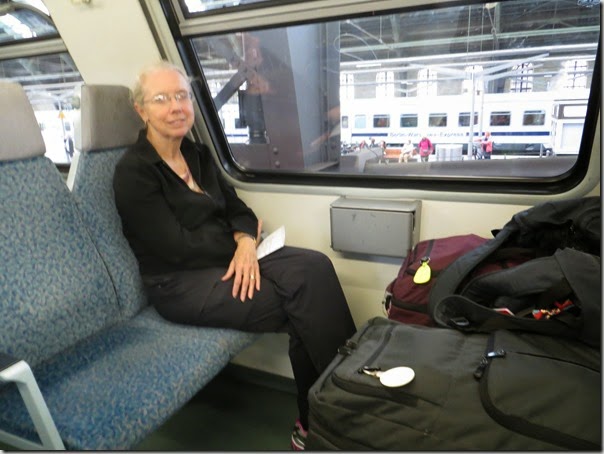 We arrived at the Ostbahnhof, got off the train and waited for the train to take us to Magdeburg, where we would have to change trains again to catch the one going to Quedlinburg. This all sounds complicated, but it wasn’t, it was even more complicated than it sounds. We got on the train at the Ostbahnhof and hadn’t traveled far until I realized it wasn’t the right train for the second time this morning. So much for me telling Linda, “Trust me, I know all about traveling on trains in Germany.” 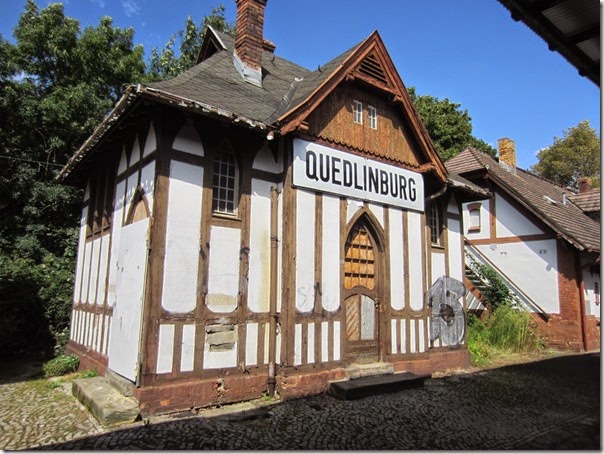 This photo is just to prove we actually made it to Quedlinburg, and on the train we were supposed to be on. Linda said I was lucky. I said it was due to my superior ability to fathom the nuisances of the German rail system. It was a nice try but she wasn’t buying it. In the end she did admit that while I was really good at making mistakes, I was also very good at overcoming my stupidity. I think there was a compliment in there someplace, at least I hope there was. Goofball Bob. 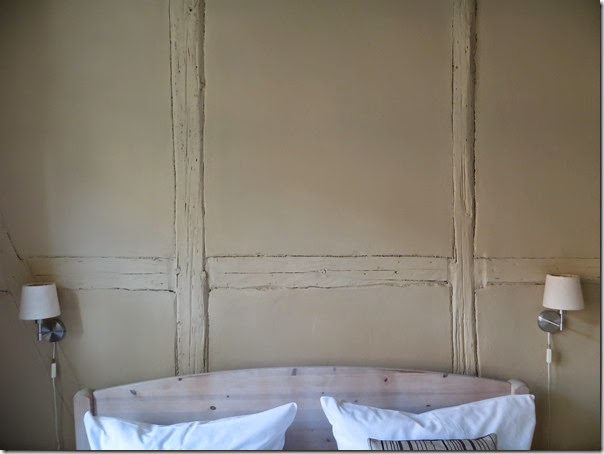 All was forgiven upon our arrival at our hotel, leaving out how I got us lost navigating the twisted streets in the medieval part of town on the way there of course. (It just wasn’t my day!) Our  hotel was built in the 1600’s and while we did have an en suite bathroom, we couldn’t walk on the floor with it creaking on ever step. Plus the half timbers showed on the wall at the head of the bed. 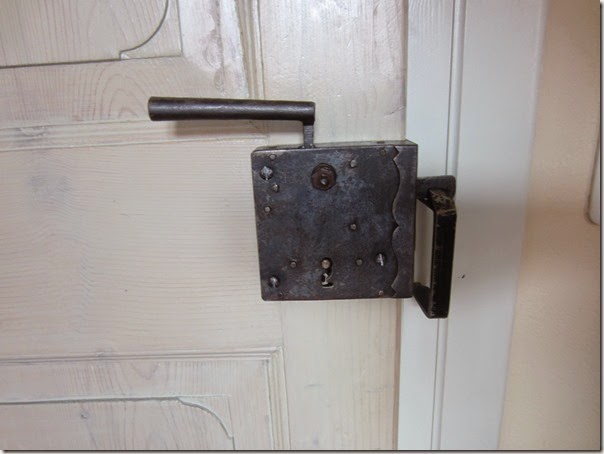 Not sure when the locks on the doors dated from, but it was definitely a long time ago. 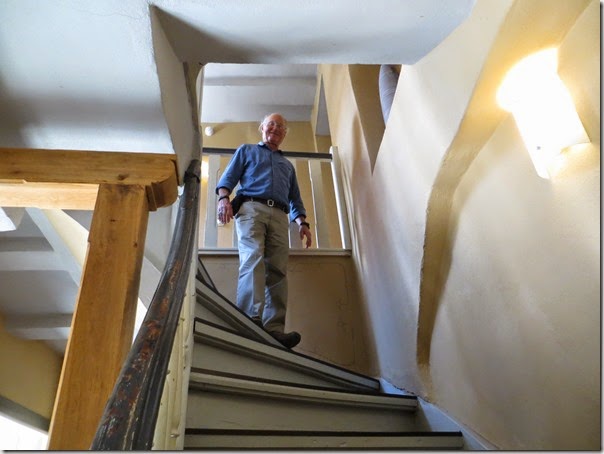 Better yet are the stairs. We are up two floors. There is no elevator. The narrow  steep stairs make a 180 degree turn. It is absolutely our kind of place and we love it. 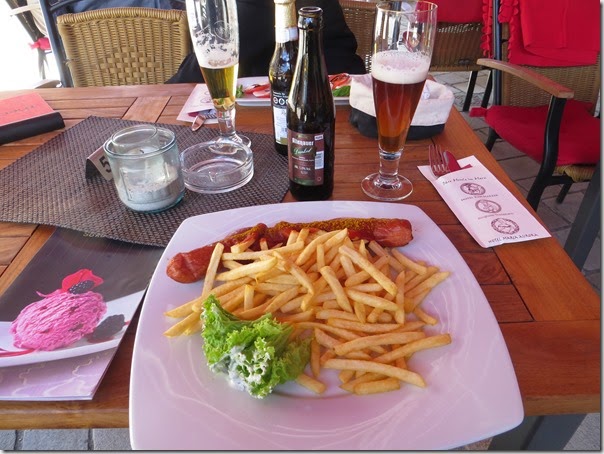 Now that we were finally in Germany, what better for lunch than currywurst and fries. 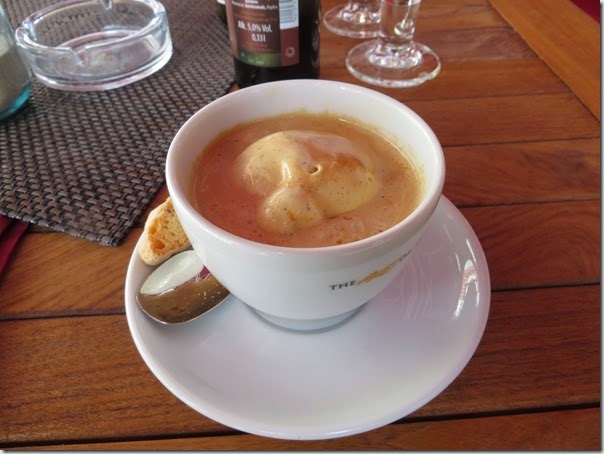 Or how about espresso with vanilla ice cream and whipped cream, plus a piece of biscotti on the side for dessert. As for the cost, we could eat three meals like this in Germany for the price of one in Norway. And honestly, the food taste better here, though the pork wurst my have influenced me on that. I may not be a foodie, but I know what I like. 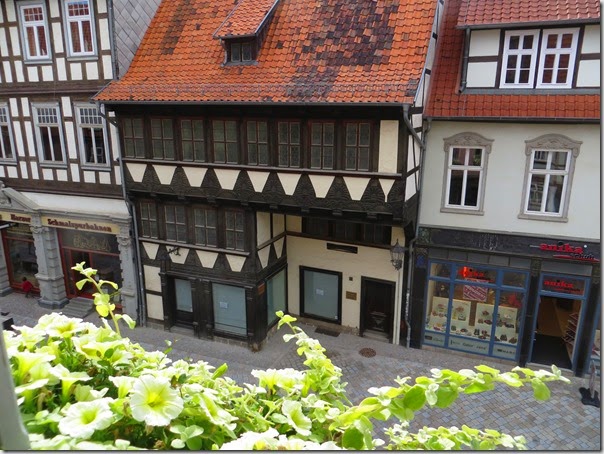 The view out one of the two windows in our room. You can’t look anywhere in this part of town and not see half timbered buildings. And real ones at that because Quedlinburg was not damaged in the war. 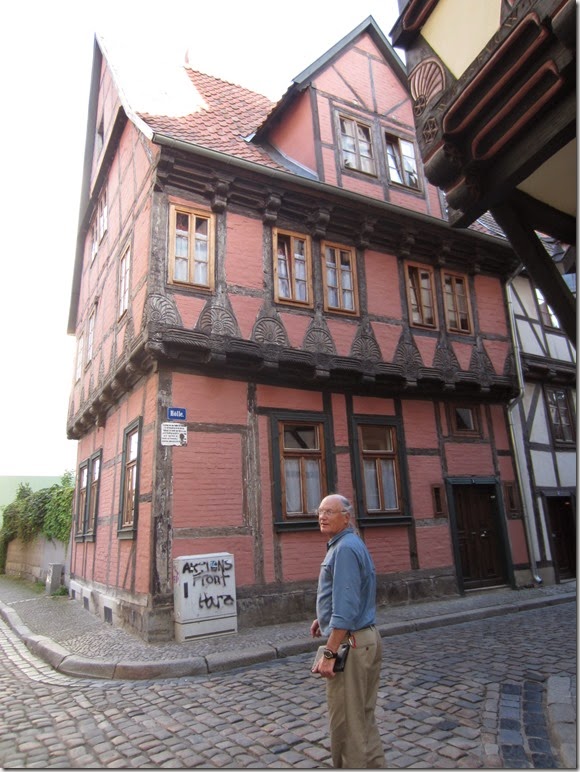 Note the vacant stare on this person. Would you believe he has gotten lost again? Never underestimate the ability of Bob to go the wrong way. I just hope this doesn’t strike so much fear in the hearts of John and Judy who will be meeting us in Magdeburg on Thursday that they cancel their trip. Considering how well I have been doing to date in being the family tour guide, it just may be Linda and I who will be lucky to end up in Magdeburg on Thursday. Map Studying Bob. 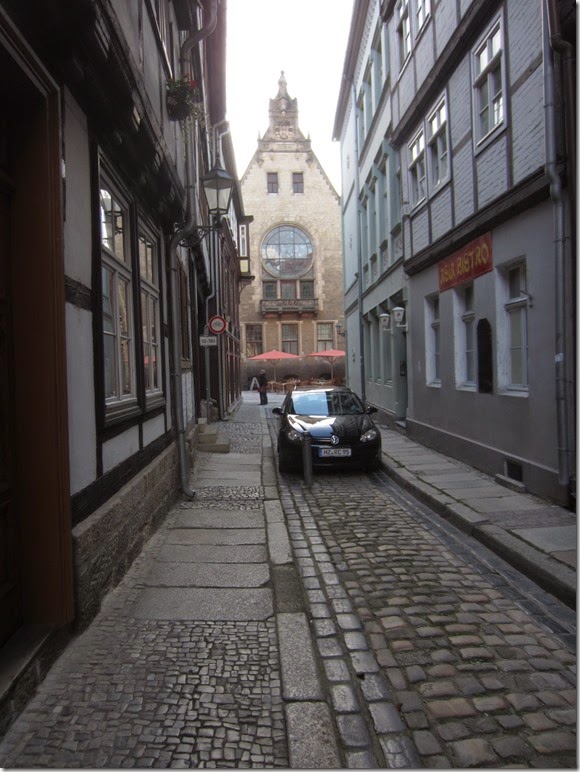 Why we don’t rent cars in Europe. 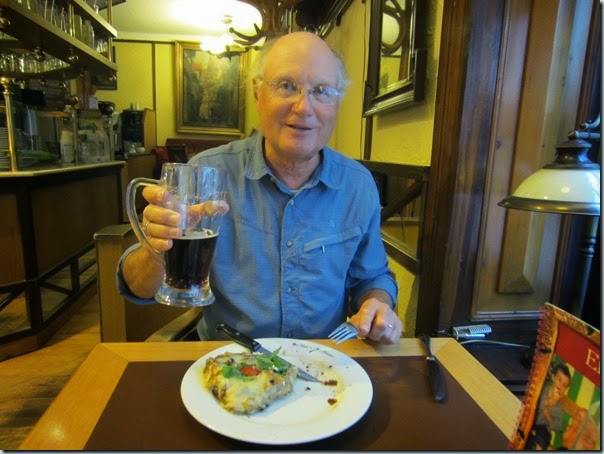 Still exhibiting a somewhat vacant stare from the harrowing events of the day, I raised a glass of schwartz bier as I devoured my flammenkucken. As for the restaurant, the one I took Linda to, the one I picked out a month ago to eat our  first evening meal in Germany, well when we got there we discovered it was closed on Monday. Some day’s you just can’t win and this was one of them for me. Poor Bob. 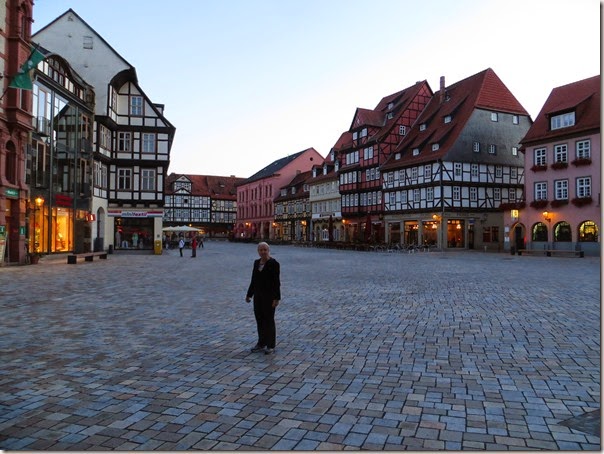 It was nearly nine by the time we finished eating. It seems that around 5 o’clock all the day trippers disappear almost by magic, the restaurants are no longer crowded and now the market square is all but deserted as those hurrying to cram every minute into their vacations are elsewhere. and it confirms why we travel the way we do, to experience Europe, not to hurried dash through it while saying we saw it.

To sum up the day I will leave you with this. Getting lost doesn’t mean it was a bad day, it just means you have an even better story to tell about your day.

For us it certainly was a day filled with many stories..