Our Voyage Ends, but…. 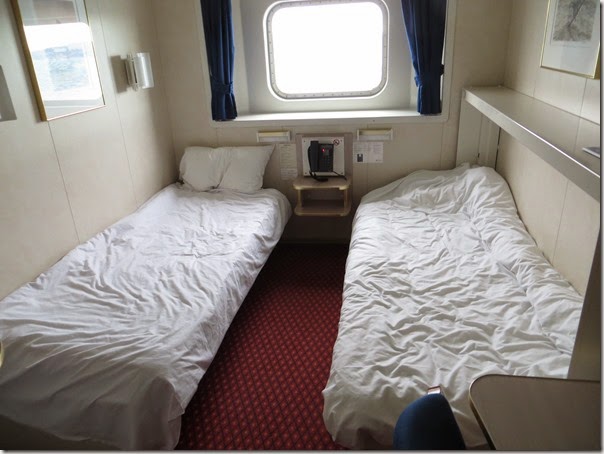 We were to vacate our cabin by 8 o’clock because the turnaround for the voyage south was only 4 1/2 hours. I woke Linda up a couple of minutes before the alarm went off at 6:10 and was informed that she intended to sleep every minute of her allotted time. Wish I could say the same thing, but with the sun rising at 2:56 this morning I was wide awake at 3:15. At this rate I will probably suffer jet lag when we fly to Germany tomorrow. Confused Bob. 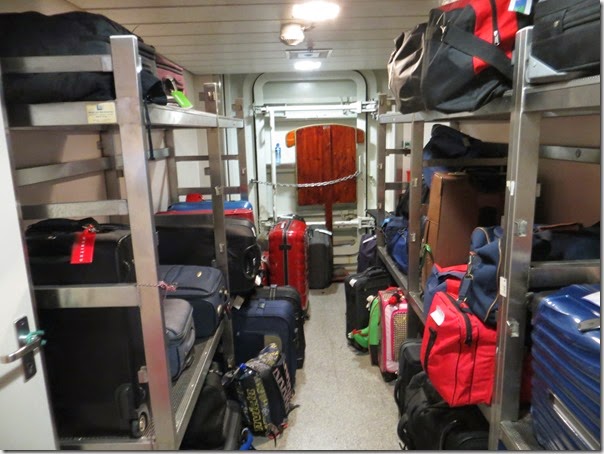 The advantage of being on deck 3 was the luggage storage room for those who wanted to carry their luggage off the ship was about 30 feet from our room. Plus the exit from the ship was also there, so no carrying luggage up and down steps to leave the ship. 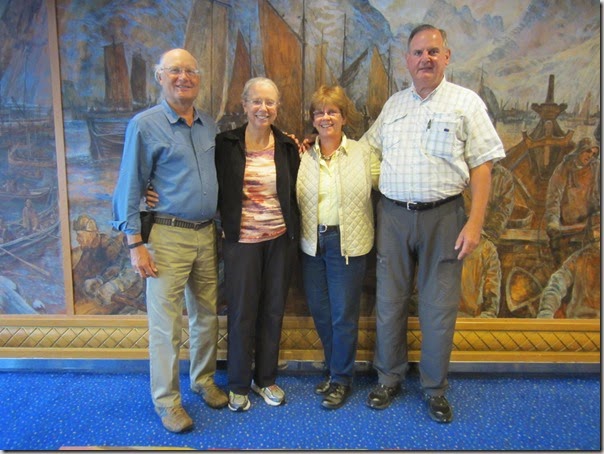 We have spent the last three weeks with Glenn and Martha, first on the Rick Steves tour, then aboard the MS Richard With. The best way to sum it up is to say: “And a great time was had by all.” Thanks, Sara N. Dippity, for letting us meet such a nice couple. 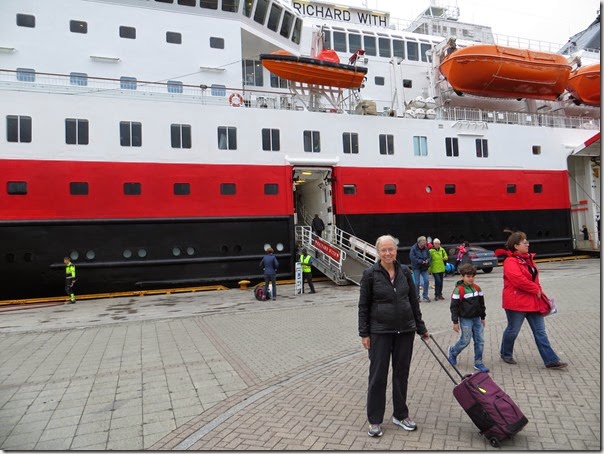 Beautiful, tall, young, slightly green ship passenger happy to once again be on solid, stable. unshifting land. Luckily she still has enough Dramamine tablets left for our tentatively planned boat trips on the Elbe, Spree, Rhine, Mosel, Seine and Thames. Something tells me she will be offering up regular offerings to the calm water gods over the coming weeks. 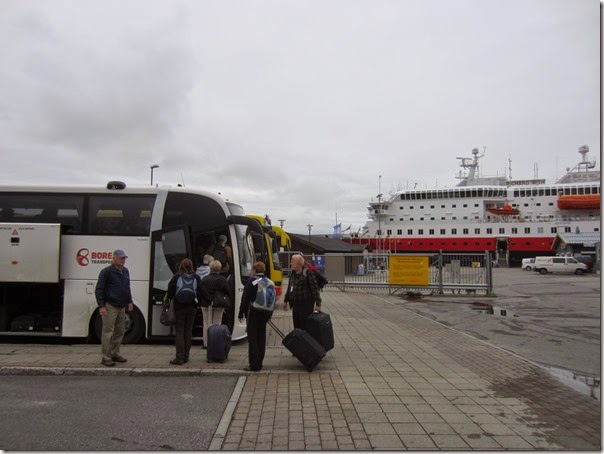 It was 35 Kroner to ride the bus into town and it was money very well spent. As we looked out the window during the ride we saw the people who had opted walk into town struggling with the large section of the supposed shortcut that was gravel. Dragging a roll along suitcase through that has to be no fun at all. And when we arrived at our hotel we were surprised that our room was ready and we could check-in even though it was only 9:30 in the morning. Then it was time to walk around town. 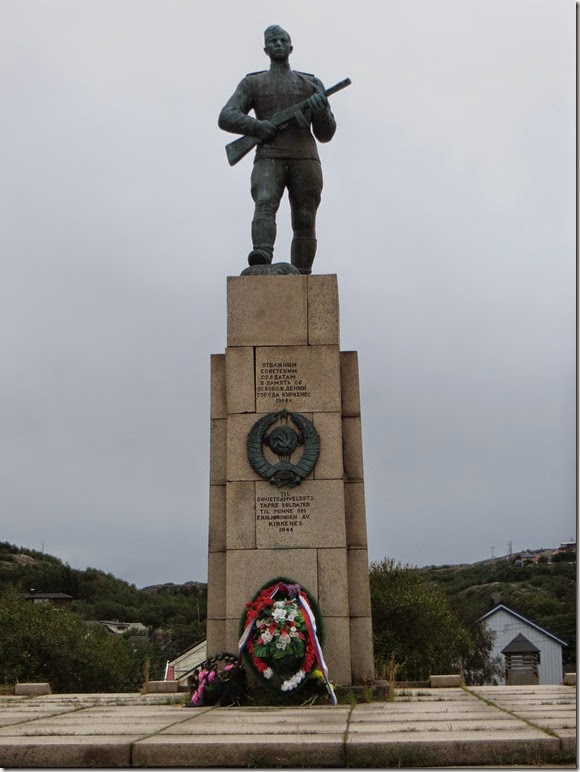 The town we are in is Kirkenes, pronounced Chickness. It was a Nazi stronghold during the war and was liberated in the fall of 1944 by the Soviet Red Army. A memorial to the Soviet soldiers is on a hill above the town. 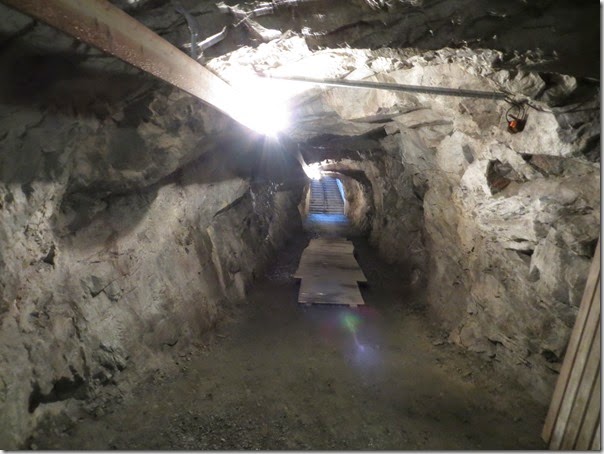 Under that hill, blasted out of solid rock, is an air raid shelter where up to 2000 citizens of Kirkenes took shelter during the over 300 air raids by Allied bombers. Linda all bundled up to watch the very good movie that was part of the tour. 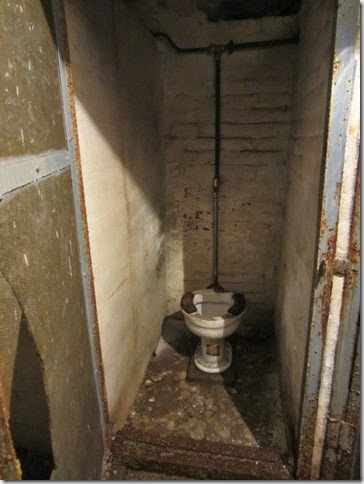 There were six toilets for the 2000 people in the shelter. When a raid was over they remained in the shelter another two hours before the all clear sounded. Kirkenes was a town of some 5000 people. When the Soviets finally liberated the town only 19 houses remained standing. 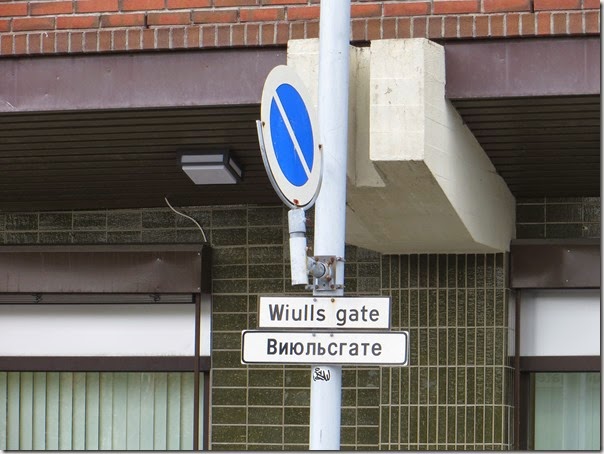 Kirkenes is very close to the border with Russia and we saw many cars in town with Russian license plates. Note the street sign in Norwegian and Russian. As we were standing in a parking lot a car turned off the road onto the pedestrian walkway, and with inches to spare made it into the parking lot. We smiled when we noted the Russian plates on the car. 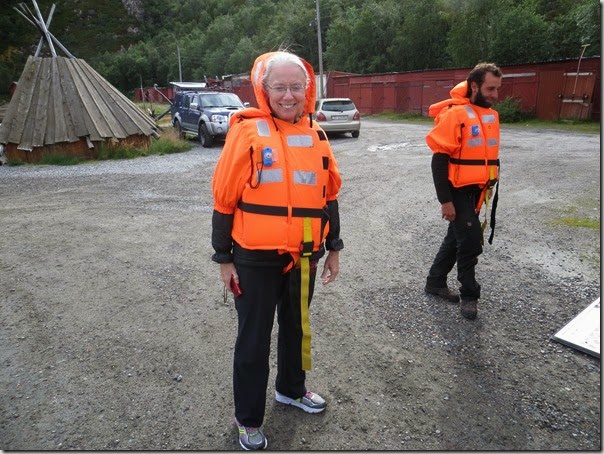 Our reason for staying overnight in Kirkenes. Linda all outfitted for our crab feast. 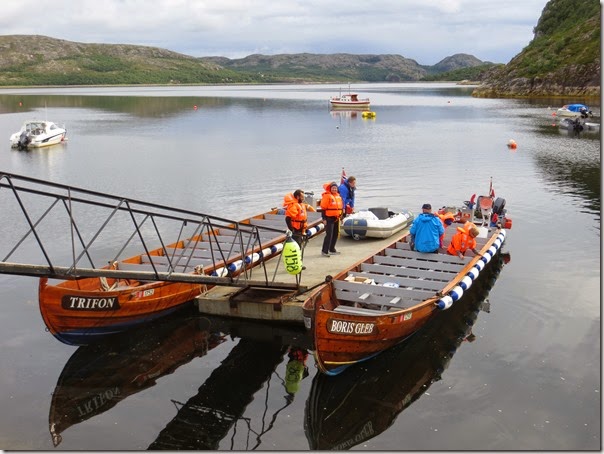 Linda, filled with Dramamine, ready to board the boat. 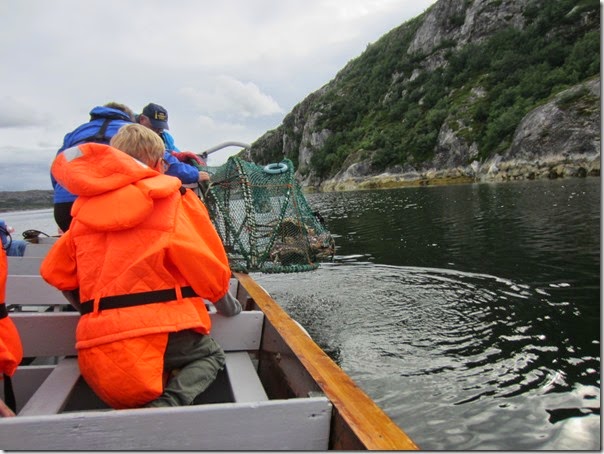 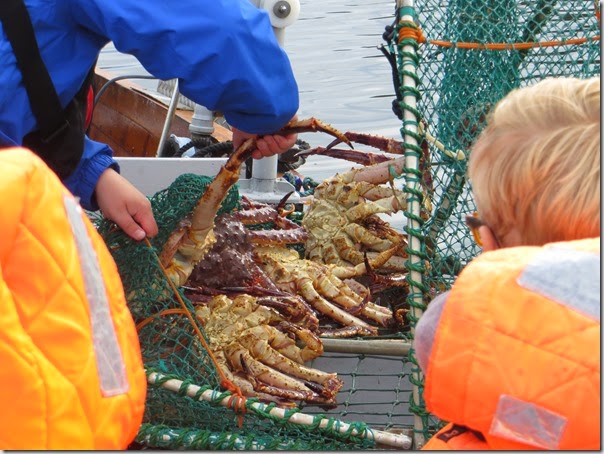 Everyone was watching as our host, Hans, removed the four crabs that would become our meal. 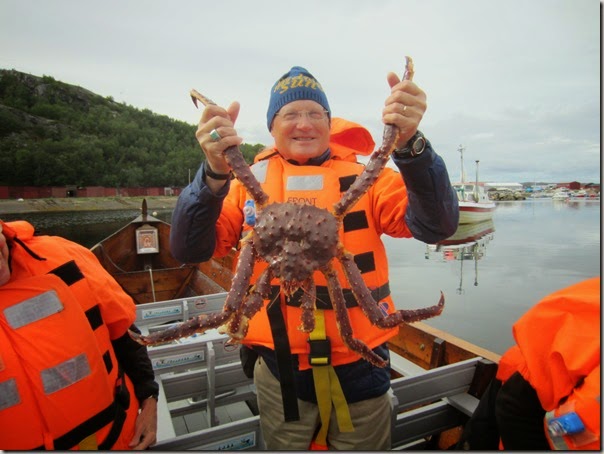 Not native to these waters, they have migrated along the coast from Russia where scientists released them as an experiment some years ago, and they are now a big industry in the area. Plus they have increased the halibut catch as the huge halibut just love them, swallowing the crabs whole. 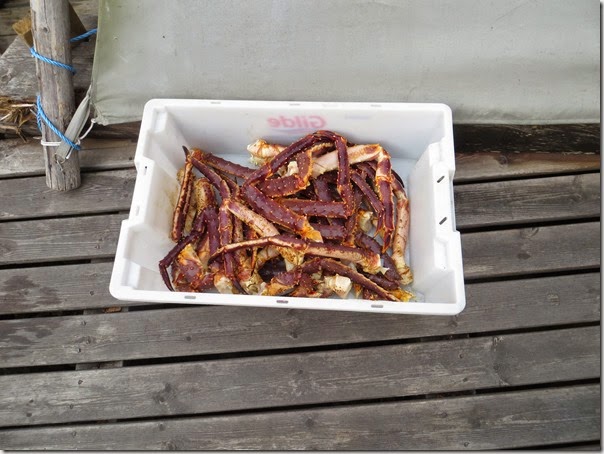 The photo doesn’t begin to due justice to the size and amount of crab legs in there. Hans said the TV shows like to focus on the really monstrous crabs, but this size makes for the best eating by far. 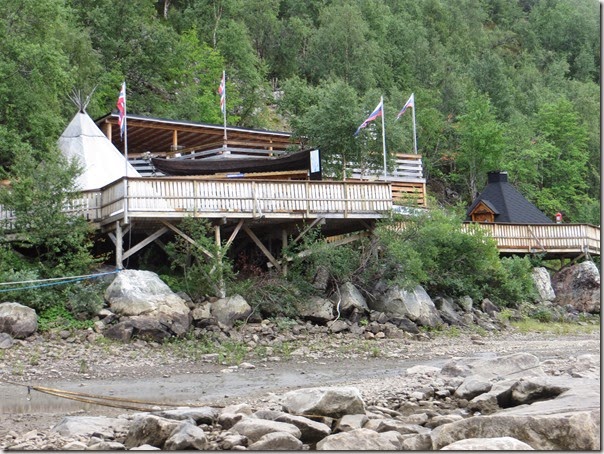 We headed up river to where their crab camp was located. It is right next to the Russian border, and the red and silver marker you can see above the fence on the left side is the border marker. 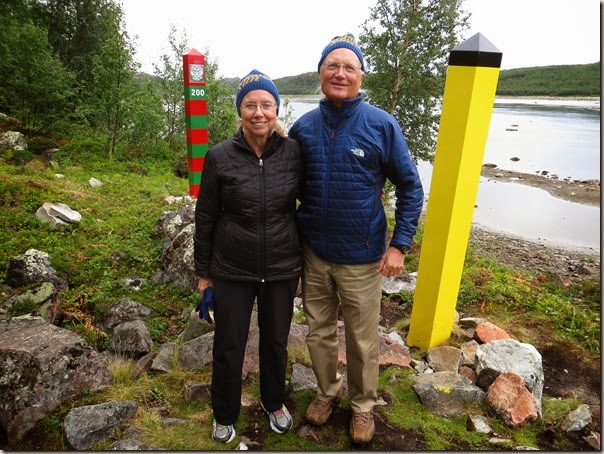 The spot where everyone gets their picture taken. The yellow marker is Norwegian, the red and green stripped is Russian. The actual border is between the two markers. I have to believe this is as close as we will ever get to Russia as it is one country we have very little desire to travel in, but notice I didn’t say never. 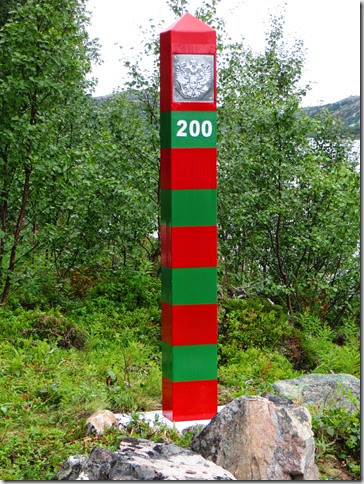 Another photo everyone takes. What good is going on vacation unless you come back with photos of the things you paid the big bucks to see. 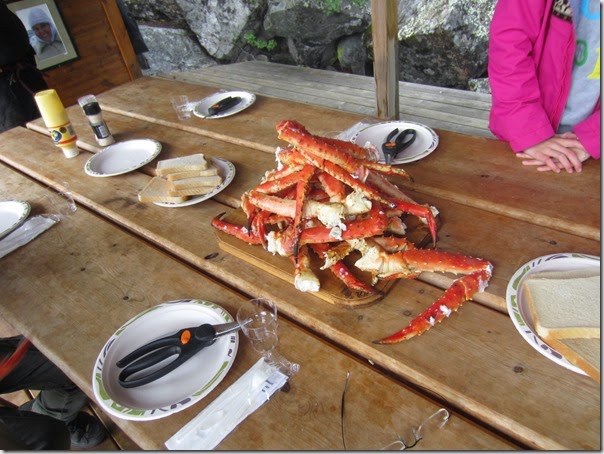 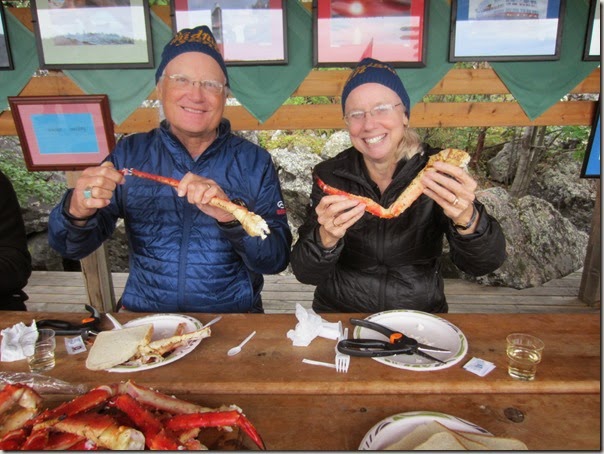 A serious crab leg eater and her wimpy husband. 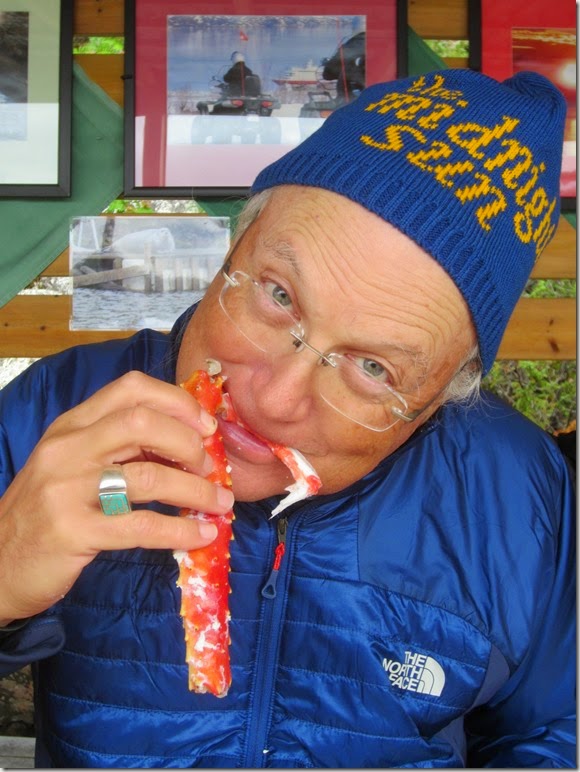 But just like the tortoise and the hare, long after she had thrown in the towel saying she couldn’t eat any more, I was happily munching away. Never in our life have we had crab that tasted even remotely as good as these. When we were done Linda commented that she was going to have a hard time ever eating crab again as it just won’t taste the same. I believe that is what the term, “moving the goal posts” means. 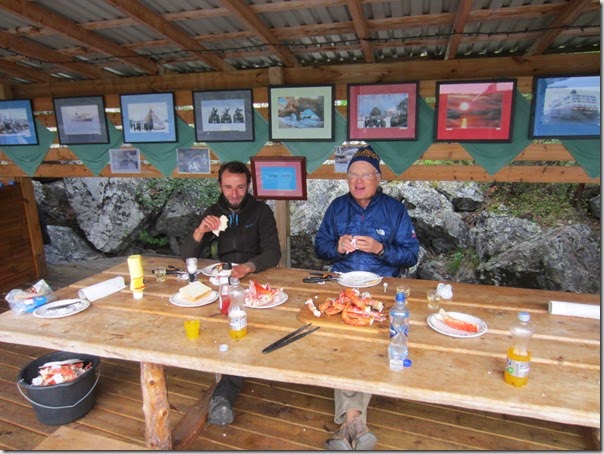 Getting towards the end. I can hardly move, but it looks like Jolan still has room. 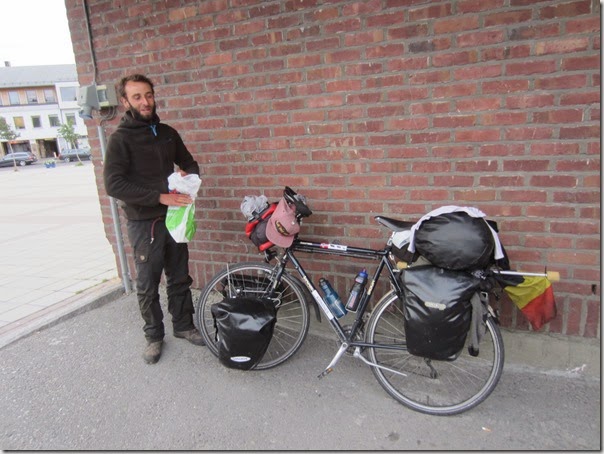 Back in town we said good-bye to our fellow crab feaster, Jolan from Belgium and who is on a three month bike trip. This is as far north as he will go, now he turns south, riding through Finland, Sweden, taking the  ferry to Germany, then riding home to Belgium, a total trip of over 8000 kilometers. We wish him well in his travels and in Life, as he was one of the nicest people we have ever had the pleasure of meeting. 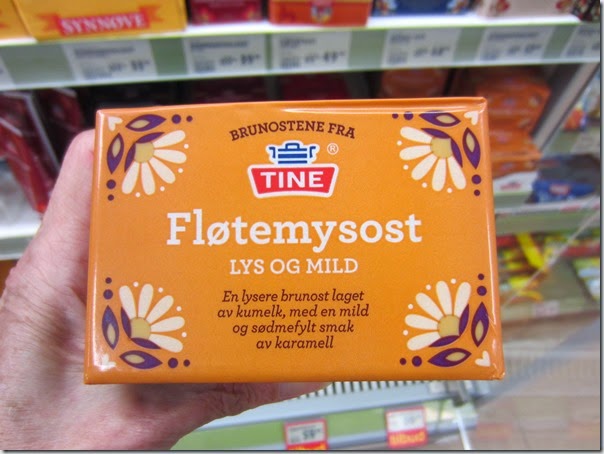 A visit to the grocery store on the town square yielded this photo of the brown cheese we love so much.  Now we know what to look for when we get back to the states. 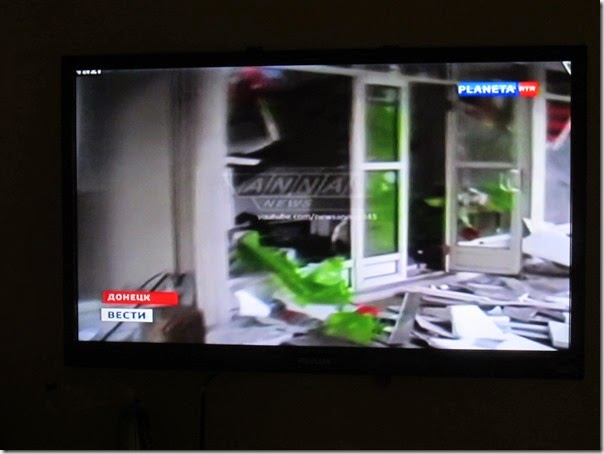 Being so close to the Russian border, there are Russian stations on the TV. I don’t know what they were saying, but watching the nightly news it was obvious the lead story was the fighting in Ukraine, Later there was footing of the rioting in Ferguson, Missouri. I’d have to guess the first was about Russian’s fighting for their freedom from the Ukraine oppressor, and the second about demonstrators being attacked by the authorities in the American police state.

This is our last night in Scandinavia, tomorrow we fly to Oslo, then on to Berlin to begin our travels in Germany. Life is very good indeed.