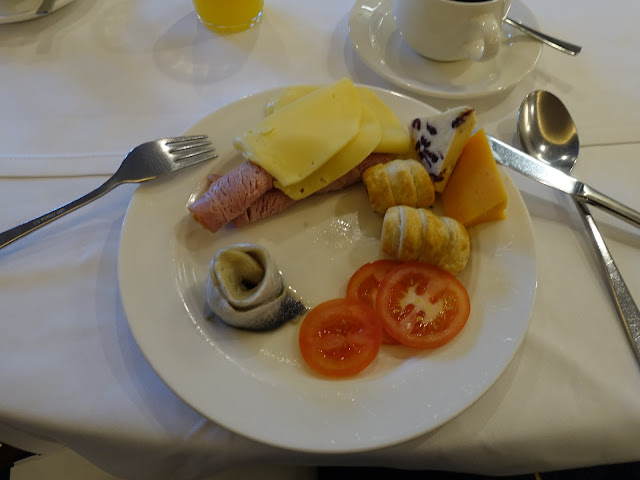 Not the greatest breakfast food photo, mostly because I'd already managed to eat several pickled herring rolls before I thought to take it. Herring Hungry Bob. 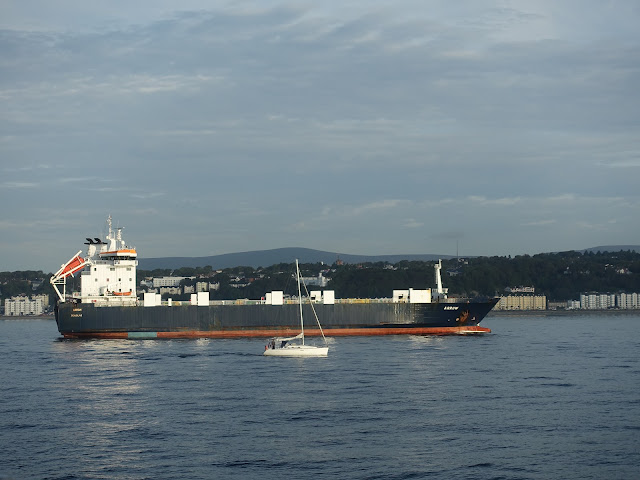 I just thought it was a cool photo. 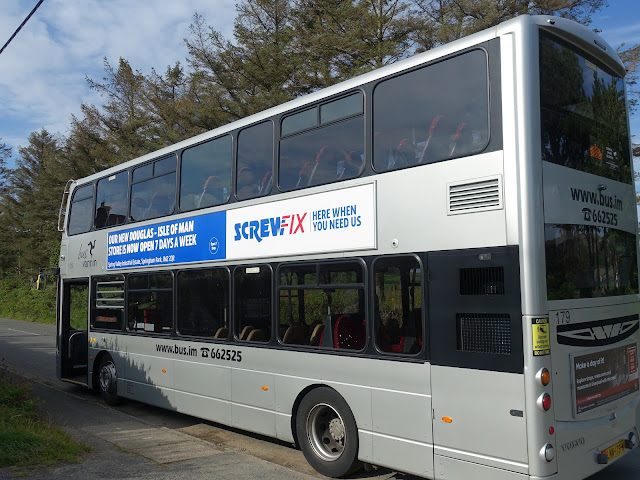 Something new today in terms of our bus, our first ride on a double-decker. 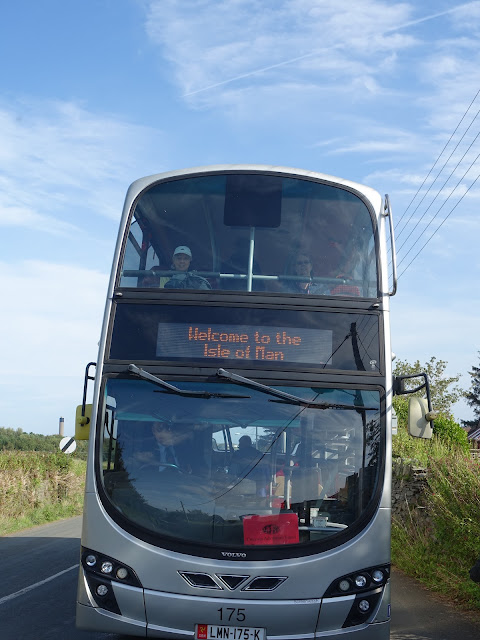 The early bird gets the worm or another way of putting it is the early arriving passenger gets to sit in the front seat of the upper deck, Linda was a very happy camper. 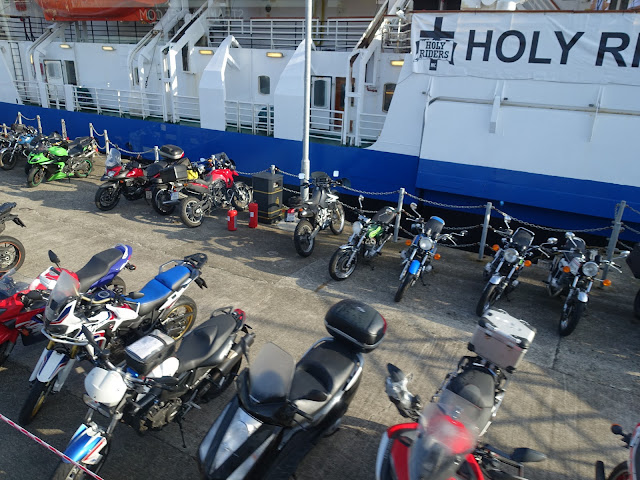 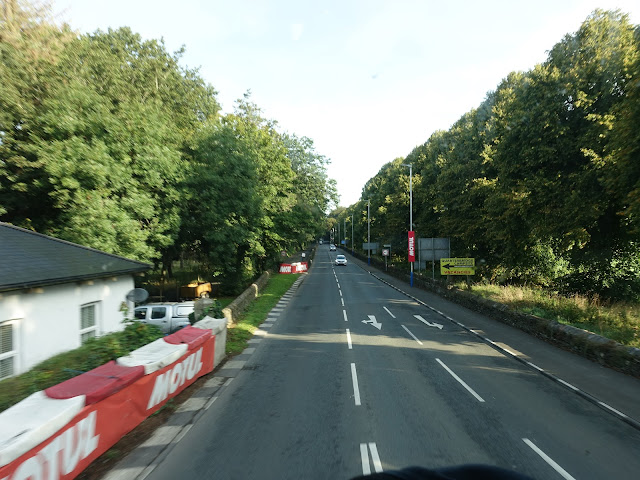 A view of a small and safer portion of the course. The top average speeds for the amateurs is in the neighborhood of 110 miles an hour for the duration of the course which is just under 38 miles on regular roads. 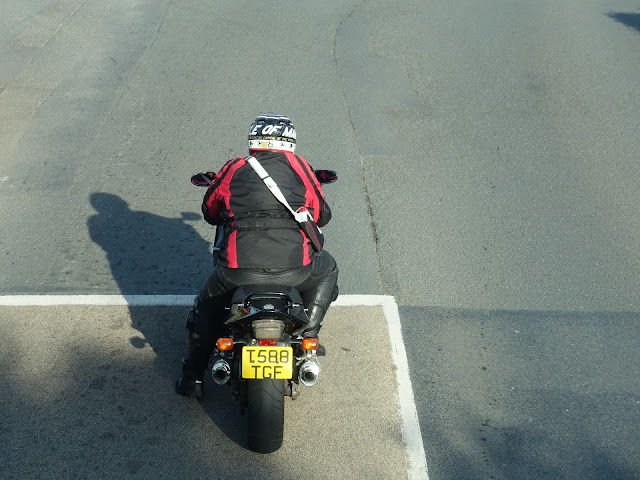 The actual Grand Prix for today didn't take place until later in the afternoon, but as we rode around in the bus this morning it seemed that everywhere you looked there were riders. 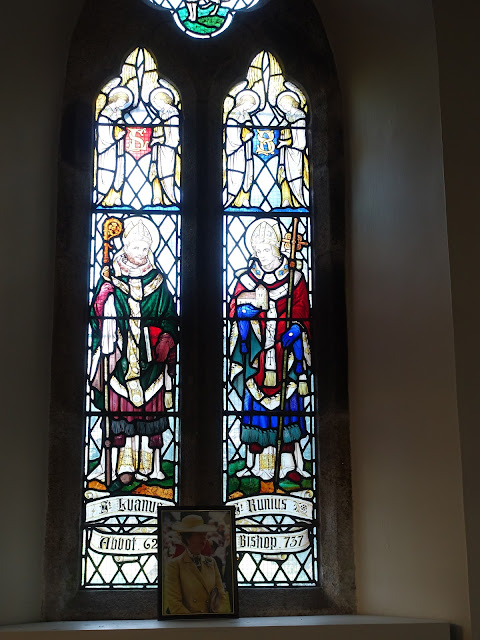 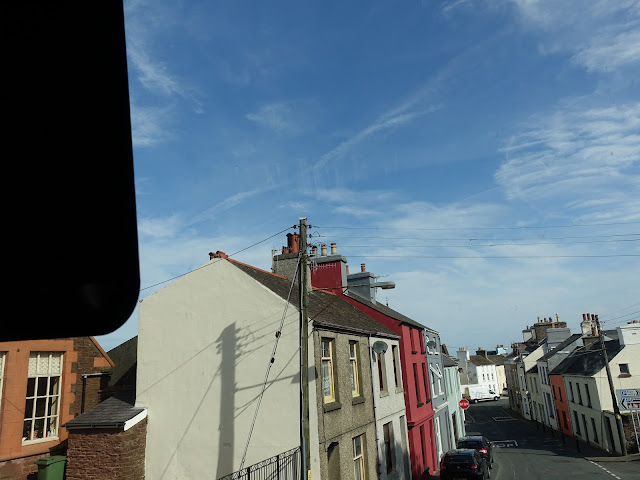 Some days you take what you can get when it comes to chimney pot photos, this was one of them. 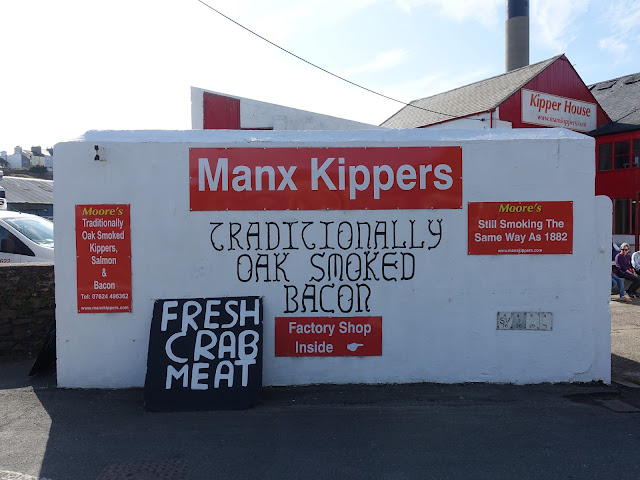 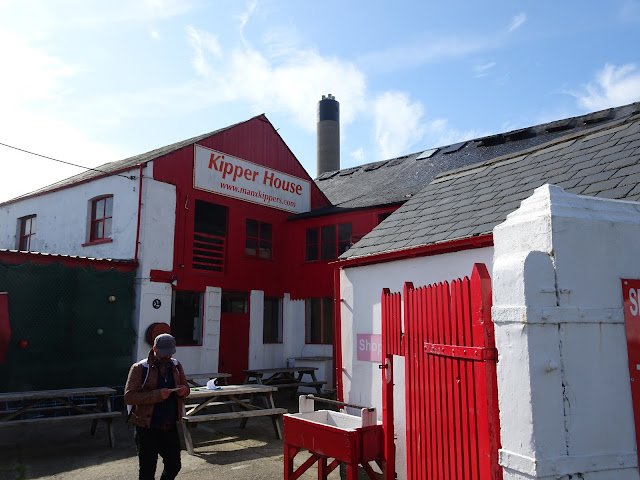 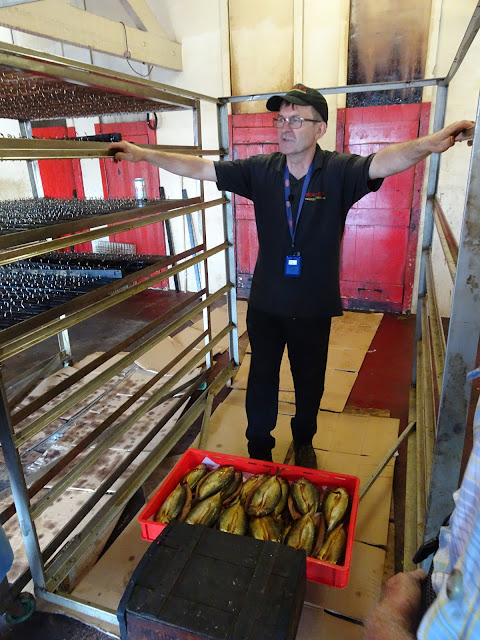 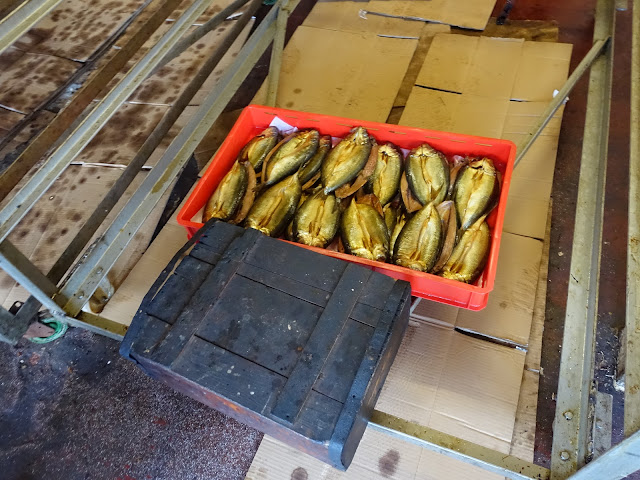 We had a great tour of this smokehouse and also got to sample the kipper. Even Linda had a small bite. This is the only smokehouse left that doesn't the old-fashioned way that it was done for many many years and when the owner retires that will be the end of it. Here everything is done by hand and the work is grueling. Electric ovens and automation have taken over instead. 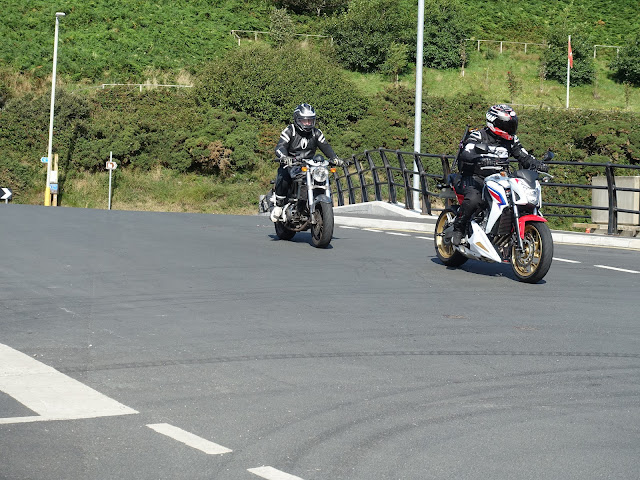 We did not actually see any of the Grand Prix but the way riders were speeding around, it was interesting to watch. Later in the day we had a talk on the life on the Isle of Man and one of the two gentlemen giving it was a race marshal. He said he was sad to report that in the area where he was marshaling today, an experienced amateur rider from New Zealand had taken a corner at twice the speed he should have slamming into a bridge and losing his life. Then he went on to say that it is something that happens in these races and a professional lost his life in the June race, but it is looked at that they died doing what they really wanted to do and knowing all the dangers and that one little mistake may result in their death. 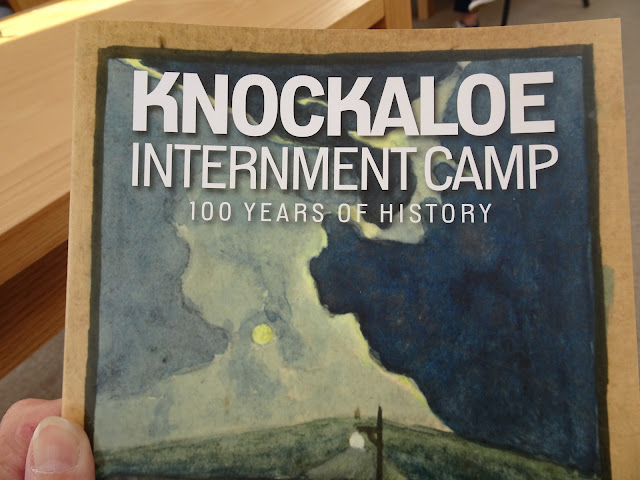 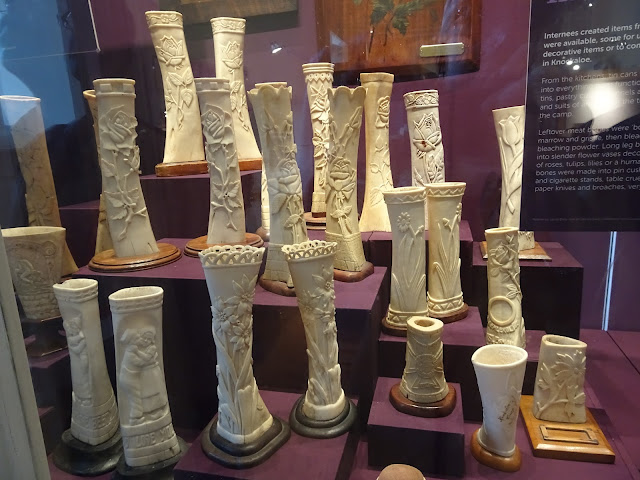 The visit to an internment camp that was used during World War I when resident aliens of the British Isles were interned on the Isle of Man. These are animal bones that have been boiled, bleached and carved into various items. 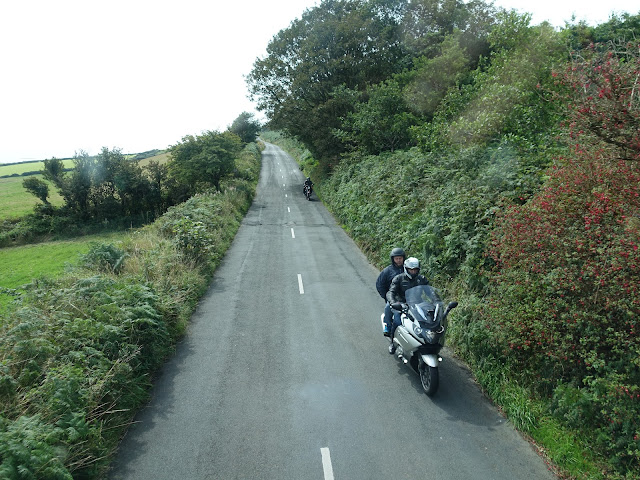 No matter what road you are on there were motorcycle riders. 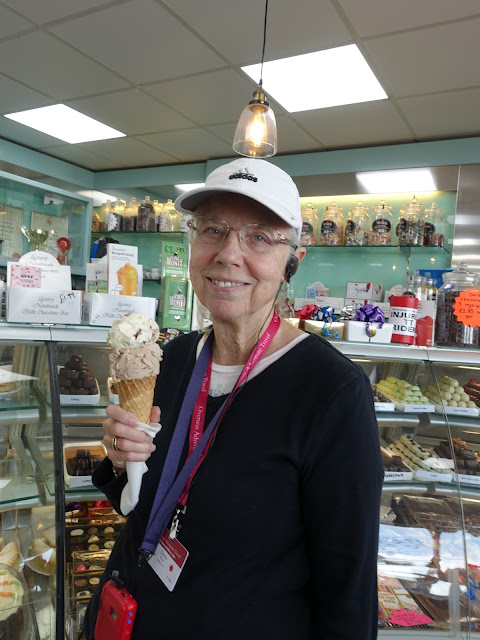 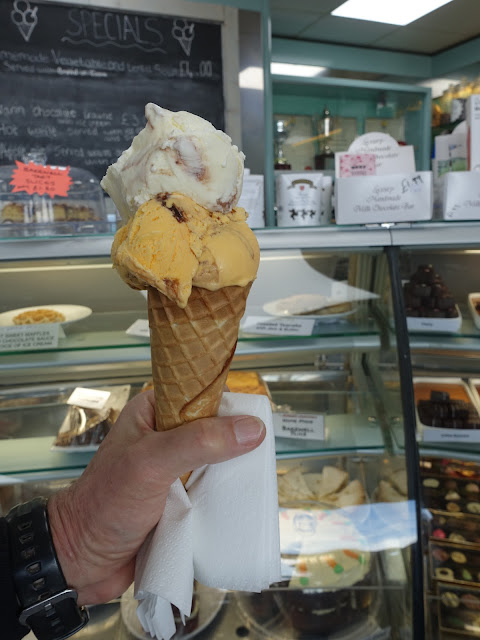 No matter where we go if there is the opportunity to have an ice cream cone Linda is at the head of the line. I always chuckle because she usually picks flavors that she knows, while I on the other hand go for, I don't have a clue what it is but I thought I'd try it. In this case the bottom was chocolate orange which was much more chocolate and orange, and the top was something called malted teaser. I can't tell you what that was but I can say I've never tasted before. I can also say that I would certainly order it again. 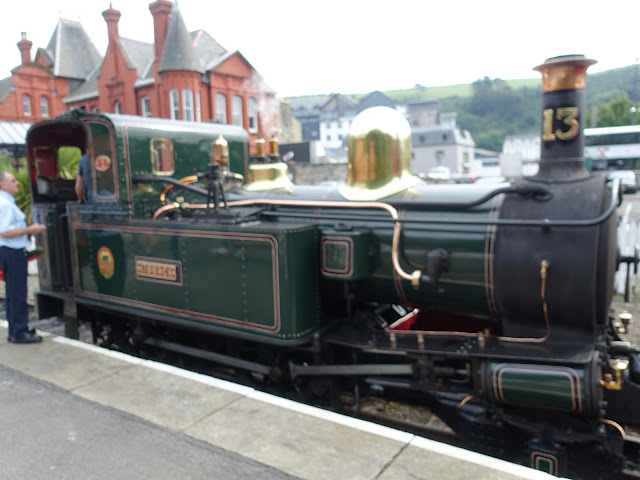 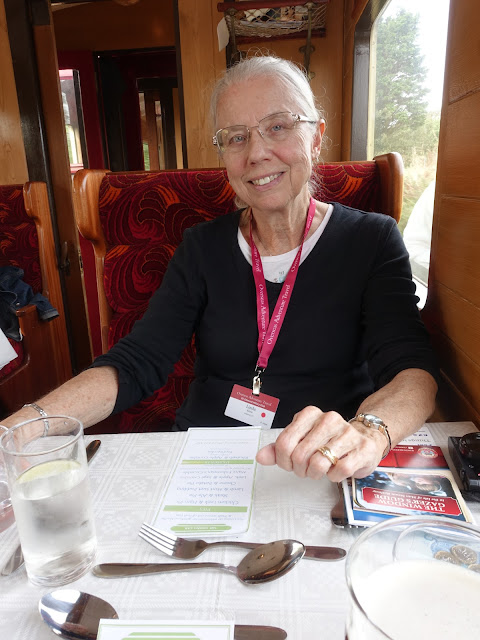 We seem to be taking rides on steam trains this year. This one was a narrow gauge train and our group had the dining car where we enjoyed a very good meal. 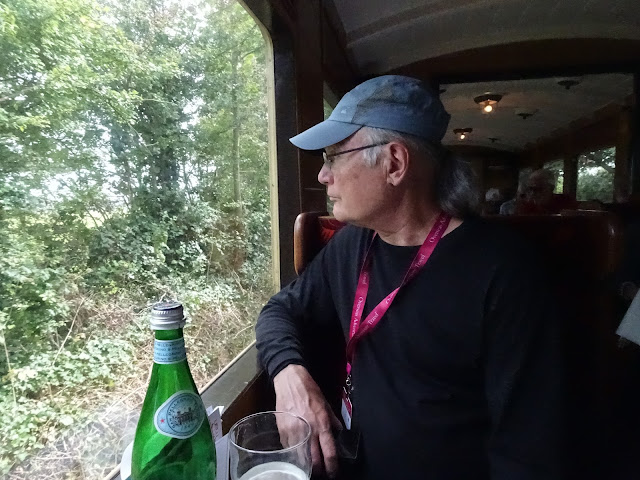 Being a narrow gauge train there was a single seat on each side with a narrow aisle. Linda and I sat at the same table and while she rode looking forward I saw things that had passed by. We had a discussion about this, actually about her giving me some warning for what was coming up so I could take a photo. In the end we compromised, I kept my camera on and when I saw something flash by I'd take a picture. 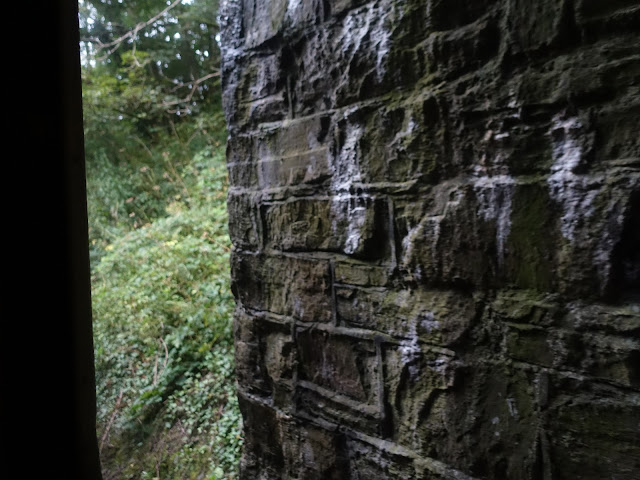 Hard to believe I'm the same person that took that tunnel picture the last time we rode the train back in Scotland. I thought I did an excellent job of getting something other than a black blur. Good Bob. 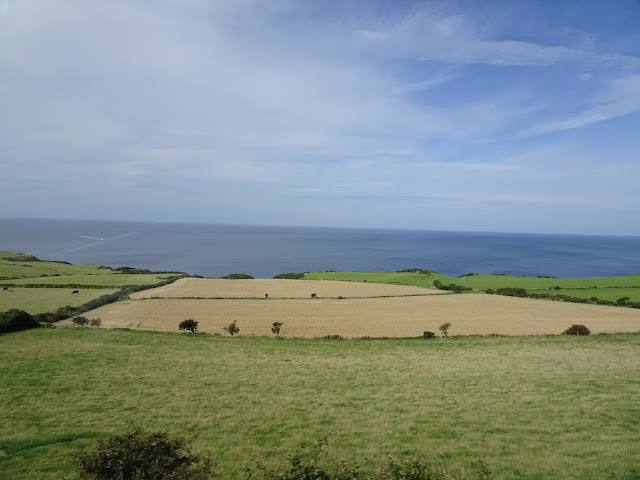 The Isle of Man is a very pretty place, but I won't show you the dozens of photos that Linda took of the landscape. 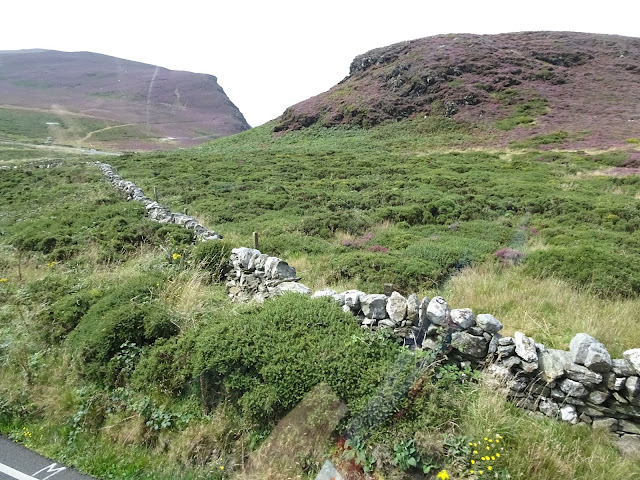 With the Heather blooming the hills were alive and the stone fences only added to the beauty of our surroundings. 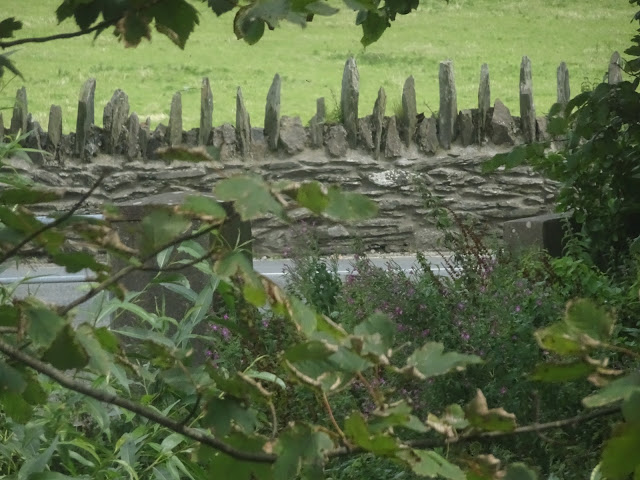 I saw this photo when I was downloading Linda's pictures, but for the life of me I could not figure out what it was. Finally I remembered her making a comment about how the stone walls sometimes had sharp stones sticking up from the top and connected the dots. Smart Bob. 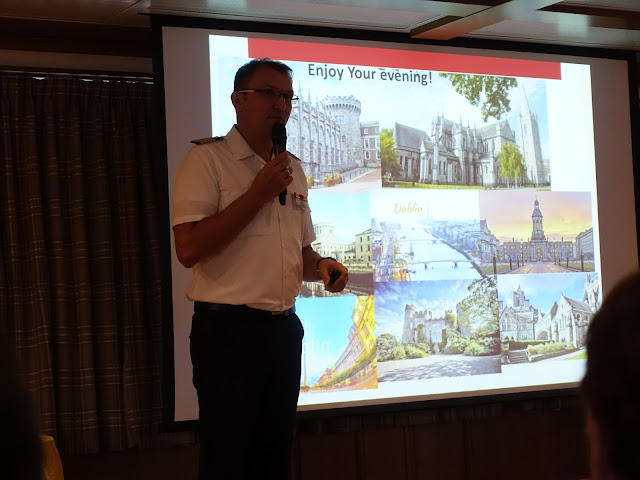 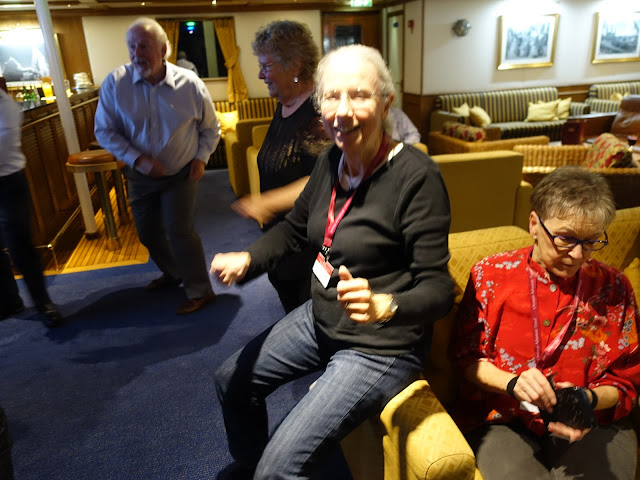 This one requires a bit of explanation. Not the greatest photo but that's okay. Tonight was karaoke night and the members of the crew were the ones doing the karaoke. But when the song selected was the twist many of us got up to show our, shall I say lack of twisting ability. So there we were testing the night away when age and food and drink caught up with us. Linda is still twisting here it's just that she's doing it while sitting on the arm of the chair. Who says country girls are brilliant. Lucky Bob.
Posted by Bob and Linda at 10:41 AM