Just a reminder that after this post we will be on board the ship and we don't know what Internet service will be like so the posts may vary greatly in their frequency. What will be will be. 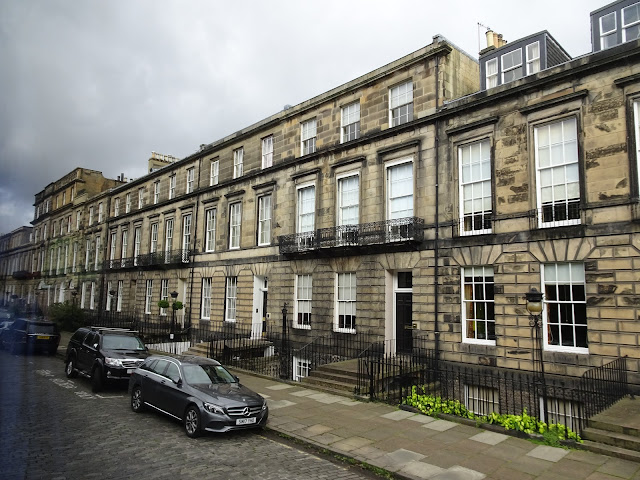 We began the morning with a narrated bus tour of Edinburgh. When you're in these other countries one doesn't often appreciate either the style or age of the buildings. This block is Georgian architecture and was built between the late 1700s and early 1800s. Another way of looking at it was that it was built around the time of the Revolutionary war or the war of 1812. Then we had in that this is one of the more exclusive areas of Edinburgh and the contrast between here and where we live is literally centuries. 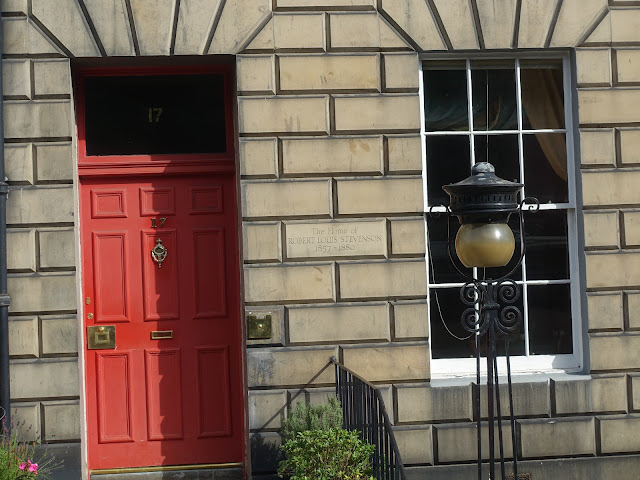 The close-up of the door from one of the buildings like above. But there's a difference, the stone block to the left of the door knocker reads the home of Robert Louis Stevenson 1857-1880. He of Treasure Island, Kidnapped, and Dr. Jekyll and Mr. Hyde. 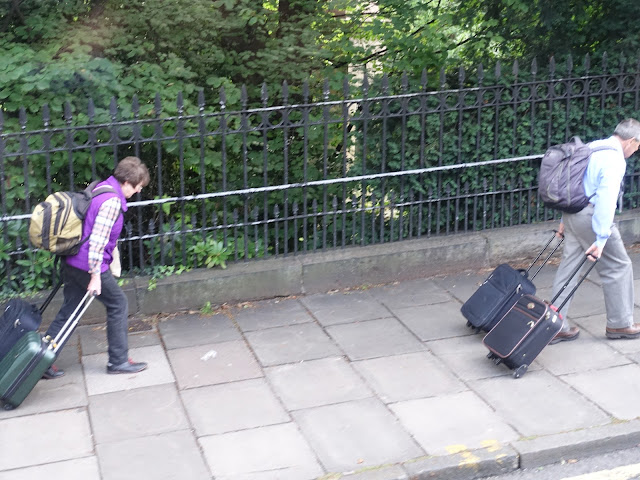 Everyone packs differently when they travel. 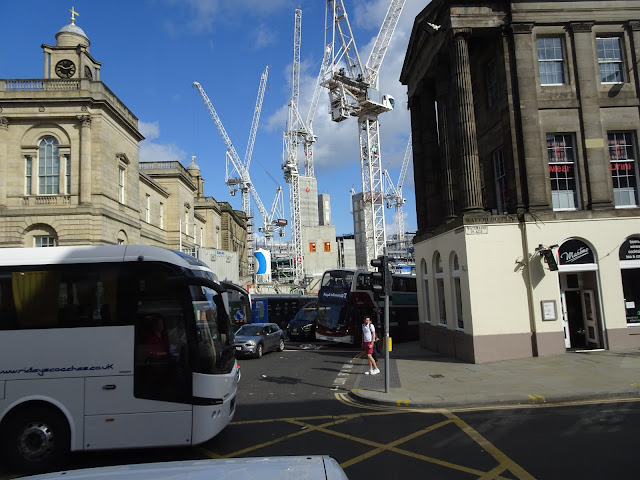 The old flanking the new. The cranes are on the site of the largest current building project in the UK and the people of Edinburgh are definitely not happy about it, but the politicians love it. 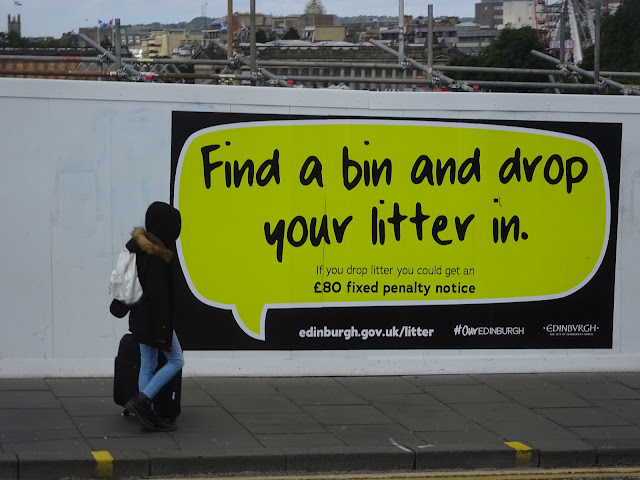 Sign of the times. Another of those Linda photos. 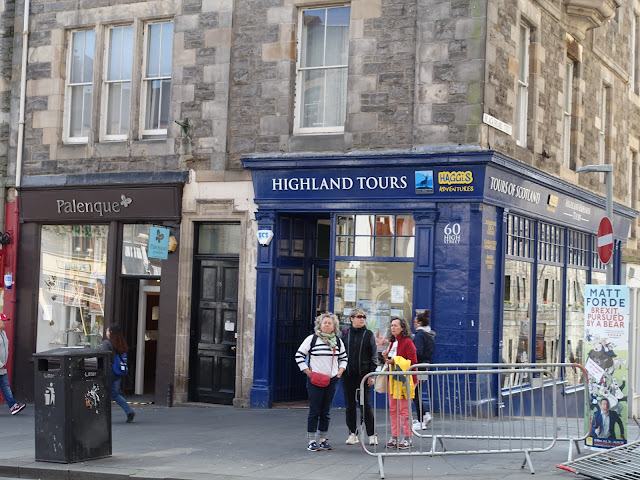 Two weeks ago we were here waiting for the bus to take us on our island tour. 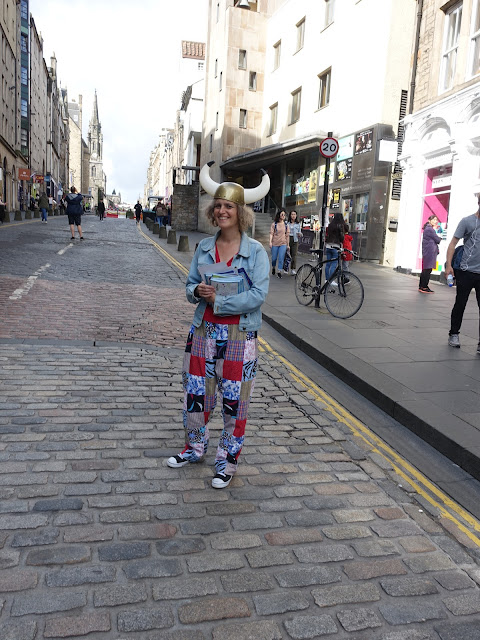 And two weeks ago I posted a picture of her passing out flyers in this same location. 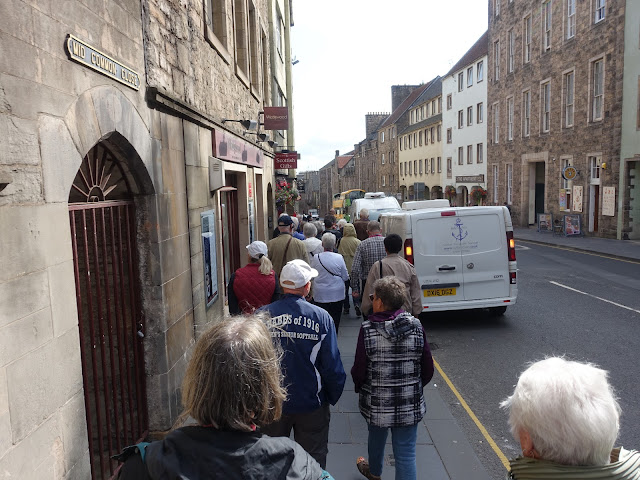 There are 22 people in our RED group. There are close to 90 people in the overall tour and they have split us up into four groups designated by colors, red yellow, blue, green. Half the people in our group were on the pre-tour. 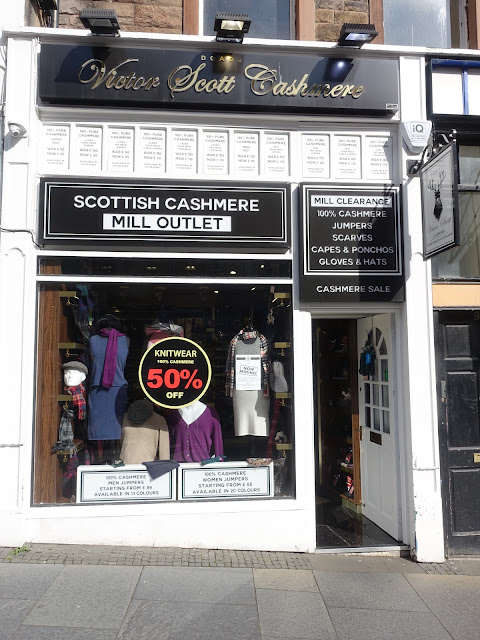 A store along the way. 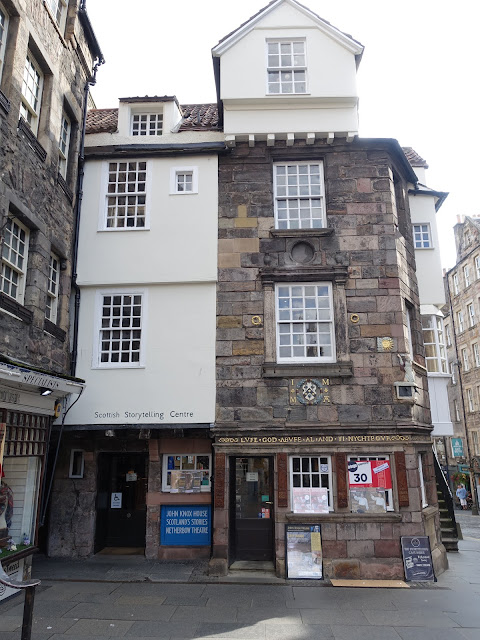 I took this picture standing in the middle of the sidewalk, and this building juts out and blocks most of it. You would think it would have been torn down long ago, but not so. It turns out this was once the home of the fiery Protestant leader, John Knox, he of Presbyterian fame. In this case history wins out over progress. 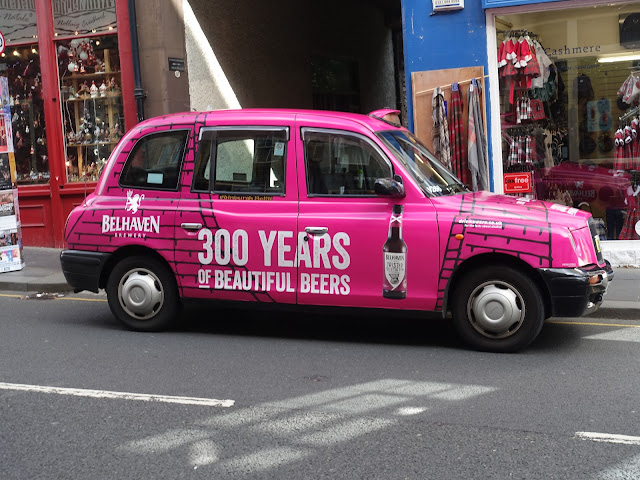 Not all cabs are "little black cabs", and not only is this one a unique color, it sports the name of my favorite Scottish ale. Happy Bob 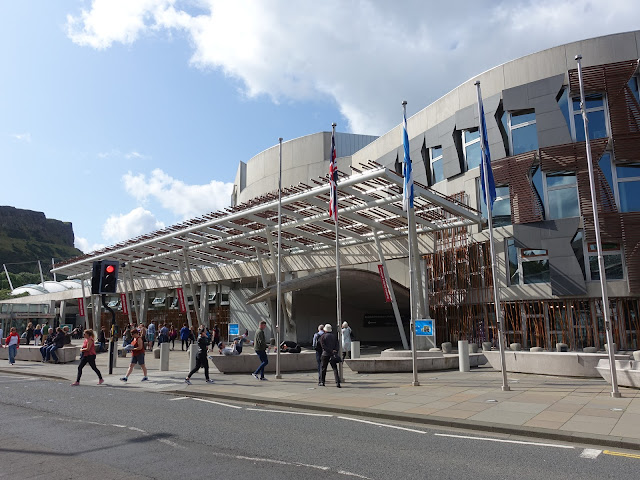 The exterior of the new Scottish Parliament Building. As our guide pointed out, there were some differences of opinion as to the architectural style selected for it. 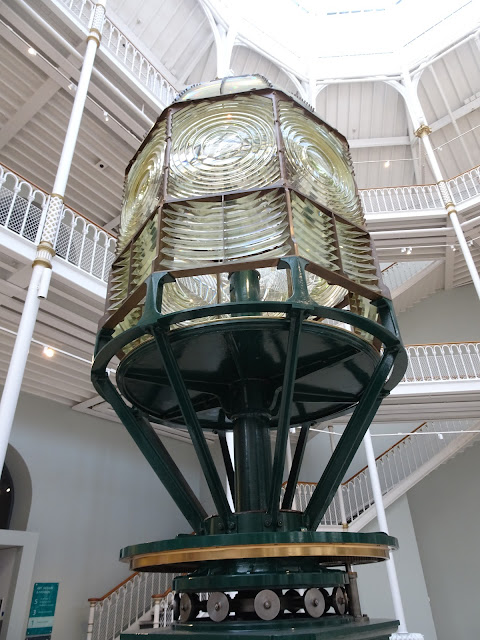 Memories of our past when we were giving tours of the Umpqua River Lighthouse. This was inside the Museum of Scotland which we really enjoyed and is definitely worth visiting if you are in Edinburgh. 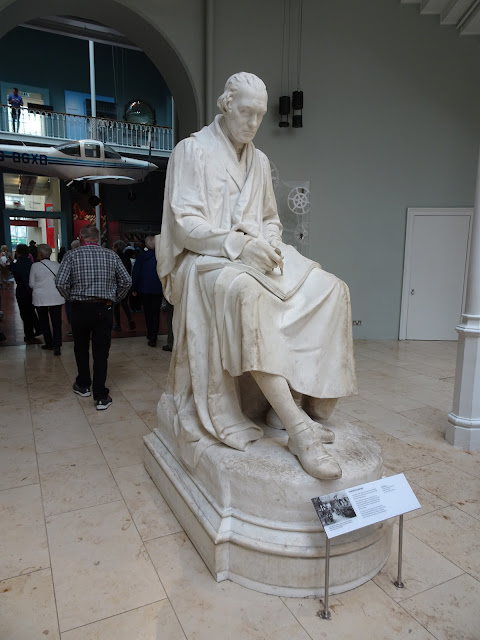 In the main hall is a statue of one of the likely relatives of our mentor next door neighbors. It is James Watt, he of steam engine fame. 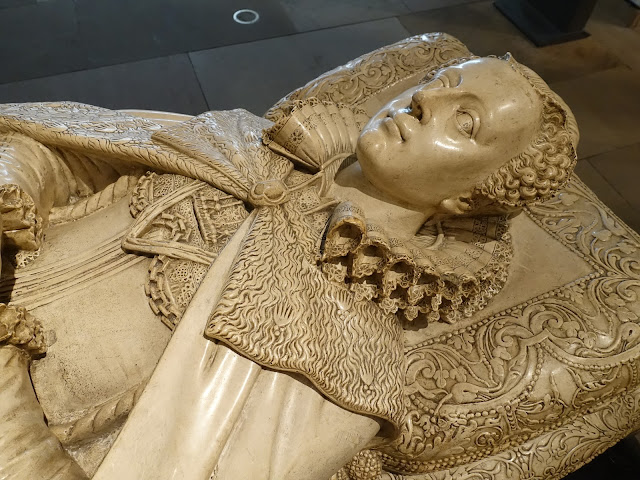 An exact replica of the tomb of Mary Queen of Scots. The intricacy of it is fantastic. 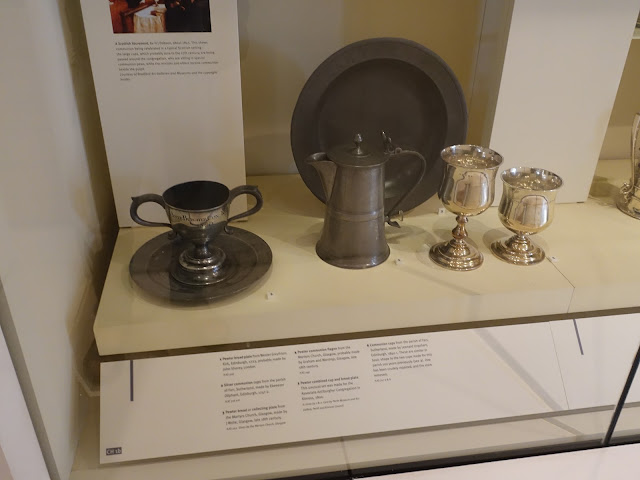 Presbyterian Communion Ware that would have been used at the time my ancestors were living in Scotland. Two brothers of my third great grandfather were Presbyterian ministers who also came over from Scotland to the US. A little bit of a touch with my past. 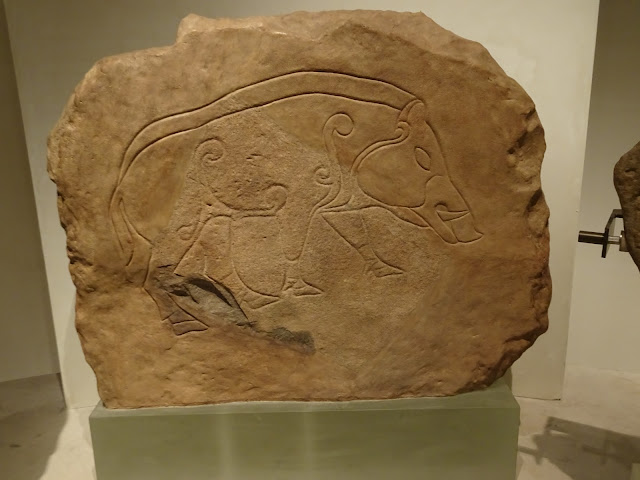 The history of people in Scotland goes back thousands of years. Both Linda and I really enjoy watching Time Team on YouTube. I could've guessed that there would be a number of photos on her camera of the exhibits in that area. This one is really cool. 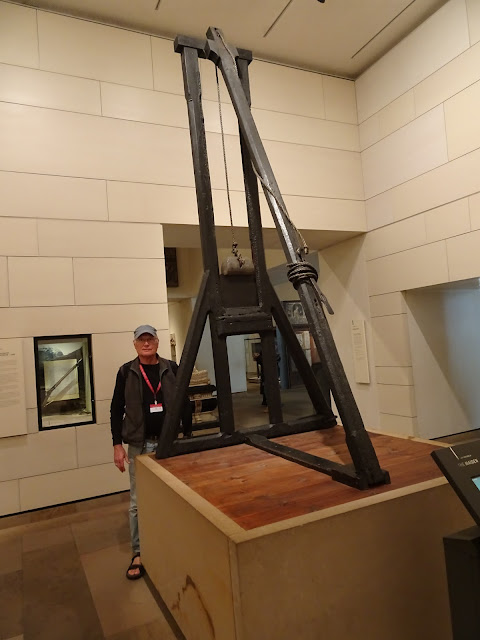 I know there's a reason why she told me to go over and stand next to this guillotine so she could take a photo of it with me in it. I wonder if the subliminal message will alter my way of thinking. Concerned Bob. 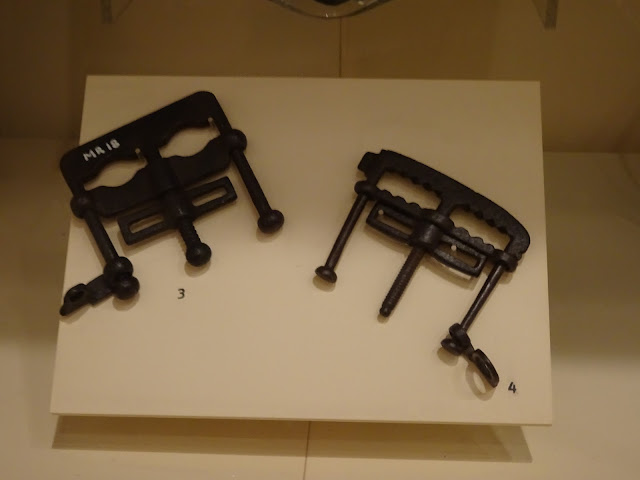 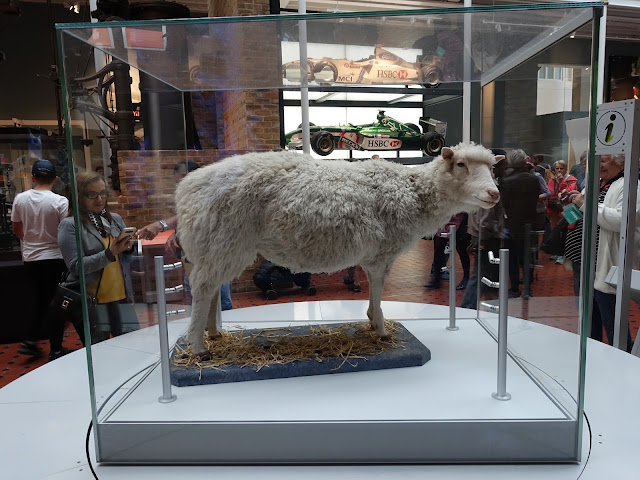 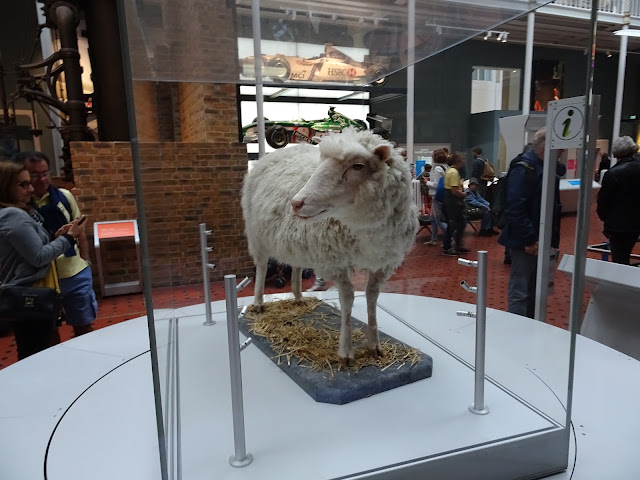 Dolly the sheep, the first cloned animal. The best part at least by the laughing Linda was doing, was how Dolly got her name. It turns out the cells used the clone Dolly were taken from the mammary glands of the donor ewe. The scientists knew just the person to name the cloned sheep after, Dolly Parton. 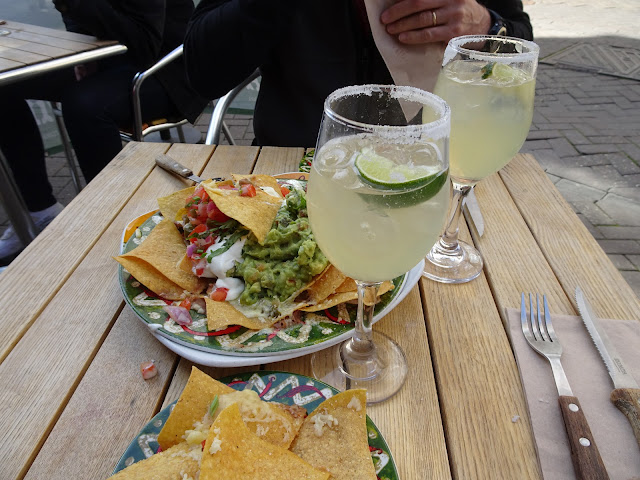 A light lunch at our favorite Mexican restaurant. 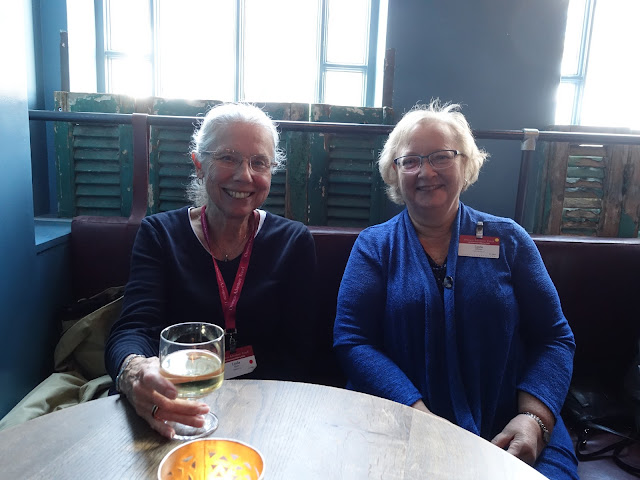 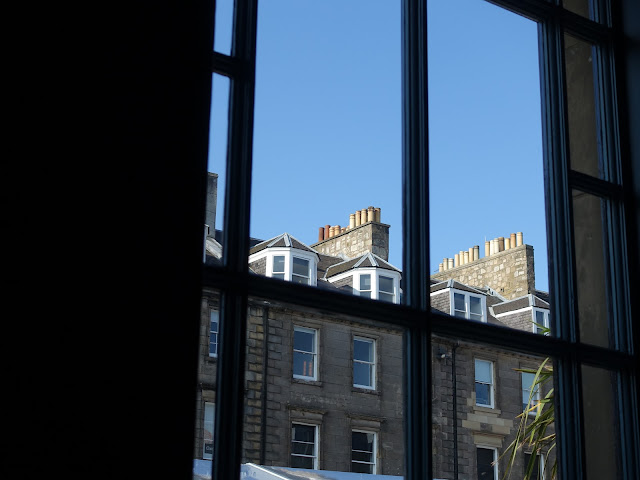 I like taking pictures of chimney pots, and when I took the photo of the two Linda's I looked out the window above them and this is what I saw, so you see it also 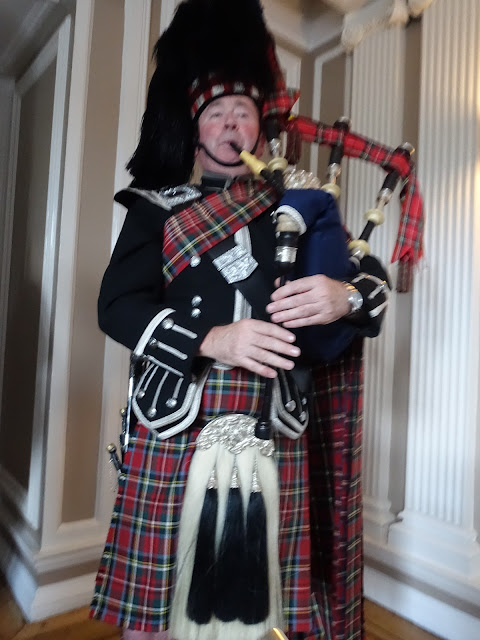 We were piped into the room where our group evening meal was held. 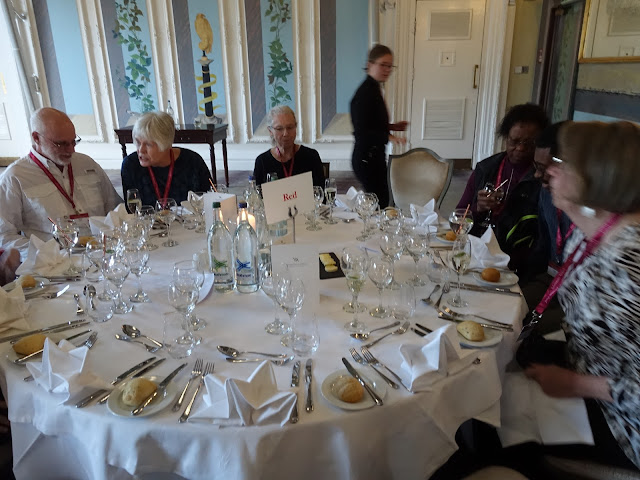 It's also the type of meal where that etiquette class I should have taken would have come in handy, what do use and when to use it. Baffled Bob 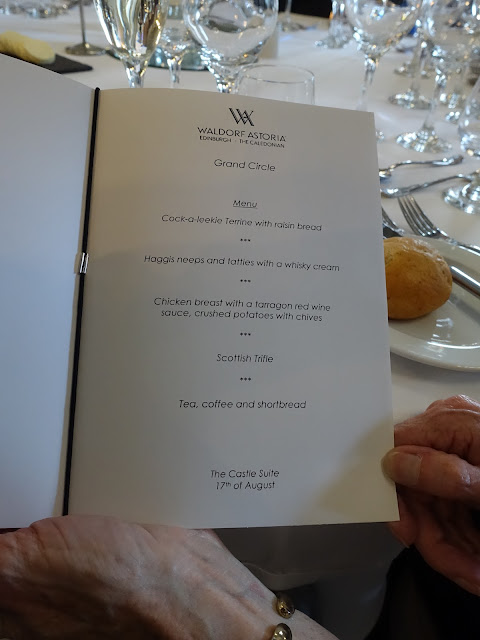 The menu for the evening. 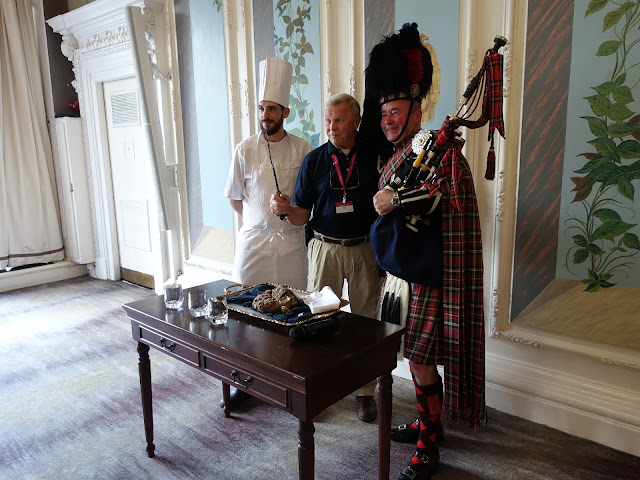 The ceremonial ode to the second course, the food of the Scots, haggis. The stomach containing the haggis had been lifted up placed on the tray and sliced open, after this came the recitation of the ode to haggis. As might be expected generally the men eight to haggis the women took a small bite though some did eat a little more, Linda not being one of them. She did have me take a photo of her fork pointing to where the tiny bit of haggis that she ate came from. However upon examining the photo you can't tell that anything was removed, though I can attest that she actually did eat a small amount of it. I was very proud of her for that. Awesome Linda. 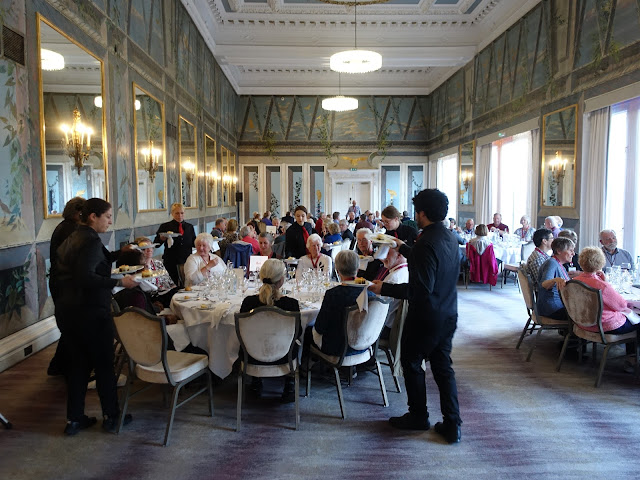 We've come to the end of this blog but just to the beginning of our main tour. I'm writing this on Sunday morning as we wait to leave for the port area and our ship. But as is often the case, things do not always go as expected. While eating breakfast the guide for the new group came up to us and said, "There's a bit of a problem, the ship can't dock, and we're not going to be boarding until 2 o'clock this afternoon." We were originally going to leave at 11:50. It just calls to mind that old travelers saying which is "when things don't goes expected, change your expectations."
Posted by Bob and Linda at 4:17 AM