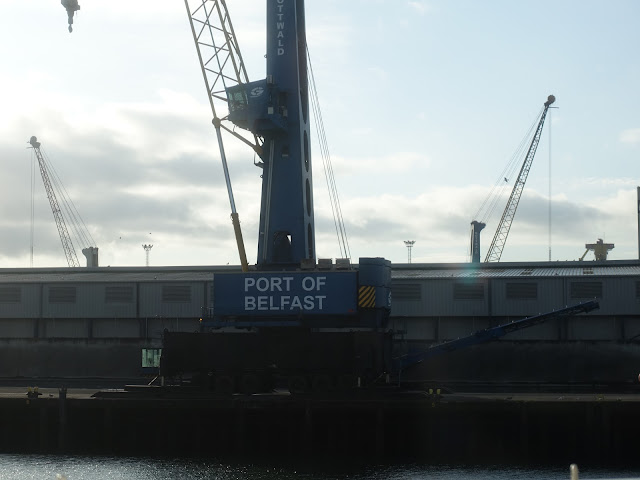 Early morning peeking out the window and saw this as we sailed up a channel. After breakfast we will be setting foot on Ireland soil for the first time ever. 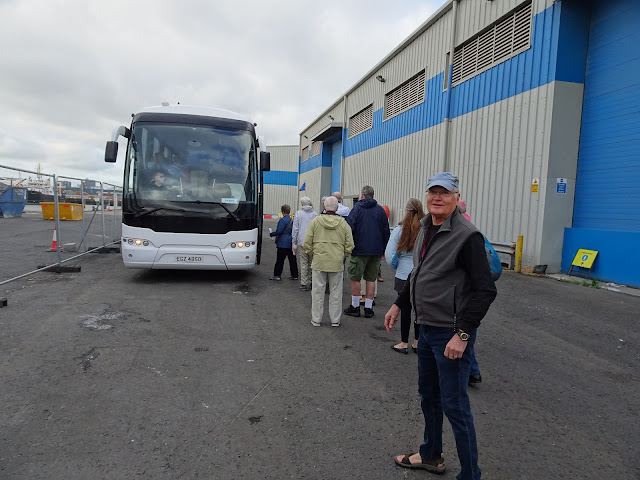 Just a comment on the weather. It turns out that it rains 153 days a year in Belfast, so our guides were teasing us that with the warm and sunny weather forecast for today we wouldn't really be experiencing Belfast. 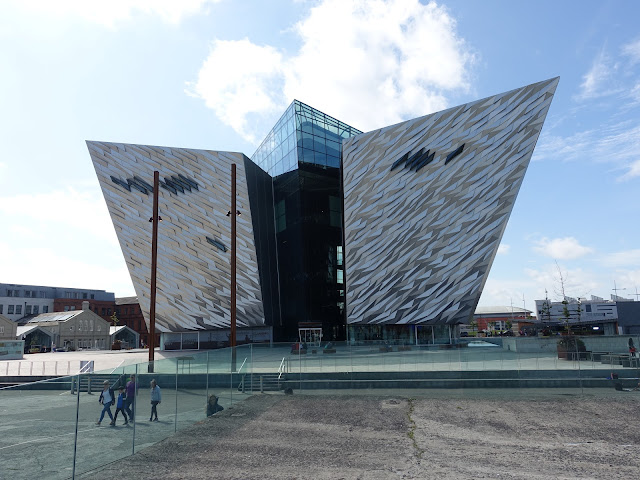 The first stop of the day, if you've been here you know what it is, if you haven't it's a museum that many people didn't want built because they thought no one would come. How very very wrong they were, with nearly 1 million visitors a year it's the Titanic Museum built right next to the site where the Titanic was actually built here in a Belfast shipyard. 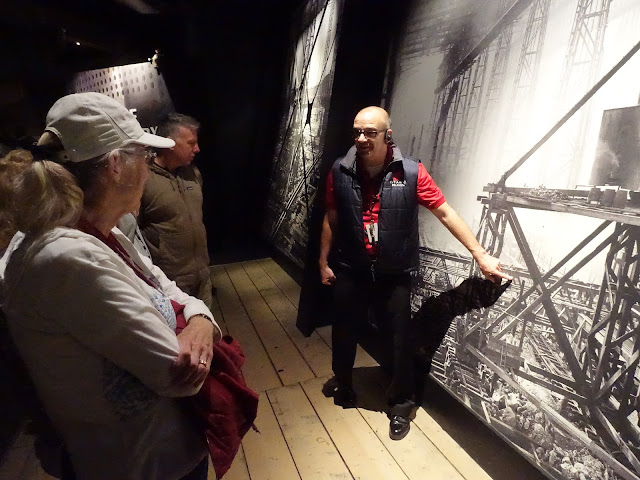 I happened to see this docent and asked him a question. The result was about 20 minutes of him pointing things out up on the fourth floor and a number of other people joining in. He had many stories about the building of the Titanic and the following two pictures help illustrate the best one. 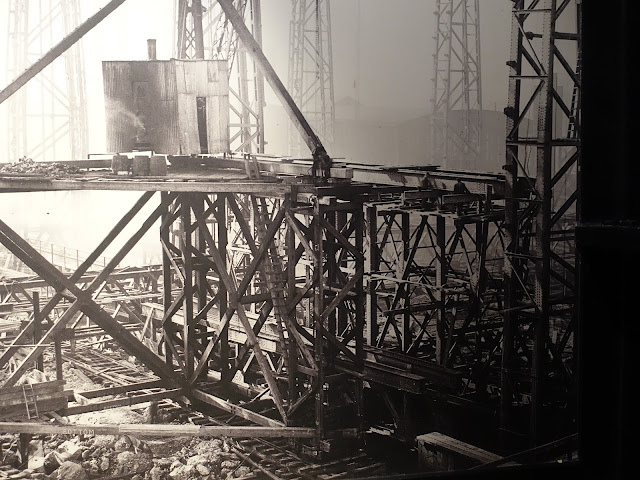 There were literally thousands of workers who built the Titanic and as the construction progressed the scaffolding grew higher and higher. Beginning workers started at the bottom and were told to things, one was always very her hat the second was never open your mouth. The second photo will demonstrate why. 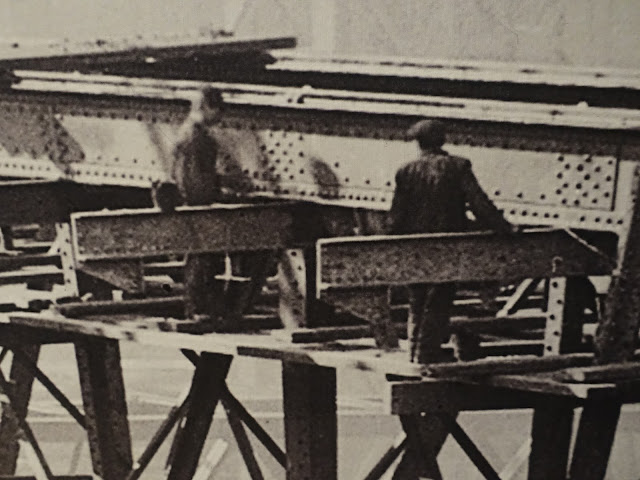 The Titanic was built with hundreds of thousands of rivets and as the rivets were tossed around buckets were used to catch them. But where our story goes is in a different direction but incorporates the buckets. It turned out that the workers were penalized in only one way, by having their pay docked. There were time limits set on certain things, and the need to go to the bathroom was one of them. They were allowed only six minutes to leave their station go and return. For the workers up high there was no way they could accomplish this task in six minutes. There were many hundreds of thousands of rivets that went into the building of the Titanic so buckets to catch rivets were everywhere. You can probably guess for his story was going, yes the buckets were used for you know what. If you look closely at the man on the left and the bucket between his feet, you might be able to tell what he's doing. 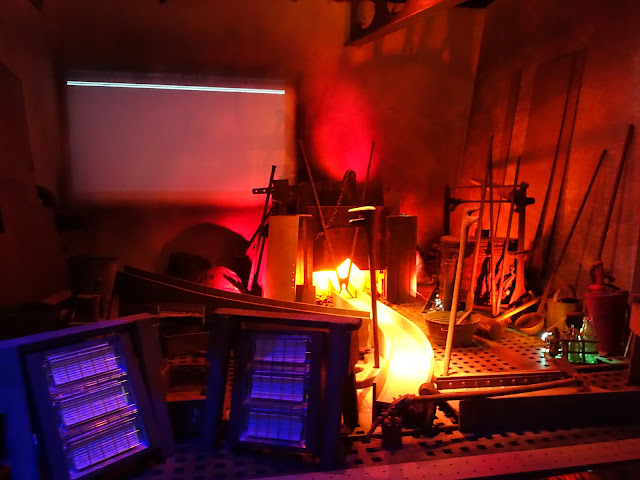 There is a ride that takes you through a simulation of the building of the Titanic and if you visit the museum go on it. You get a sense of the sights and sounds of the building process rather deep within the ship or up high. 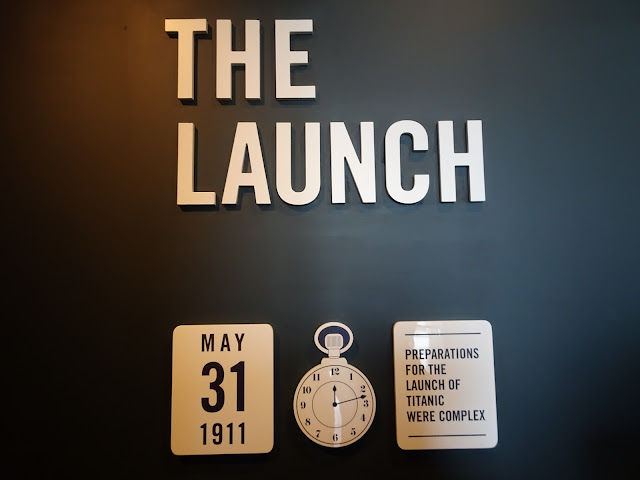 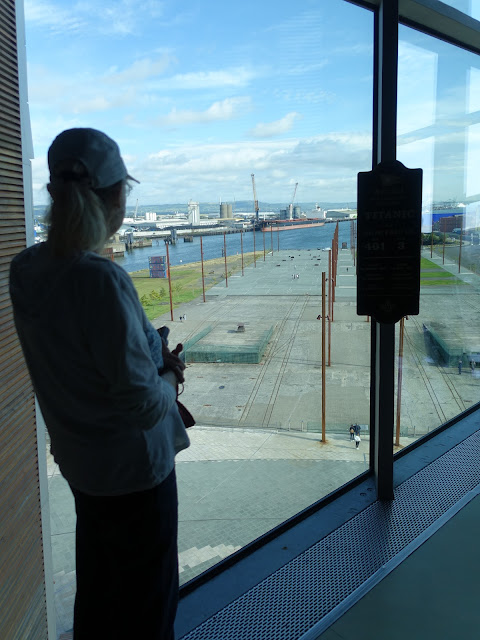 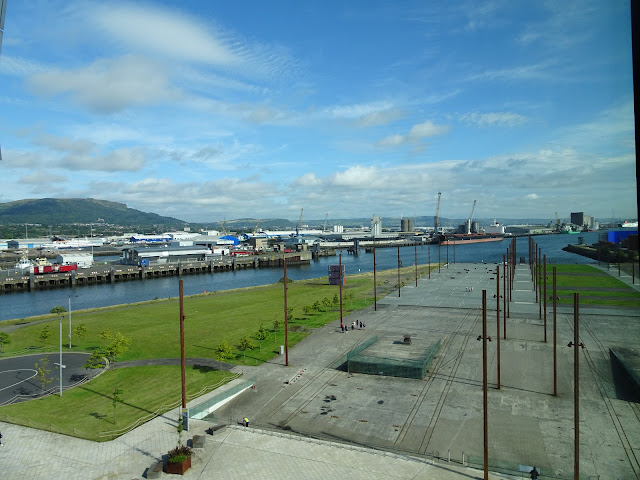 You also get the opportunity to look out over the exact spot where the Titanic was constructed which gives you an idea of the size of the ship. It was interesting as to how silent the people were as they gazed out the glass walls. 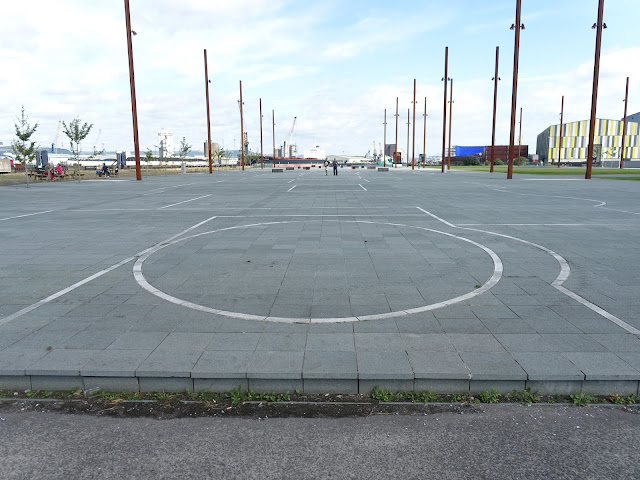 As we were leaving the museum I walked out onto the area where the Titanic was constructed. The circle right in front of me was where one of the stacks was placed. 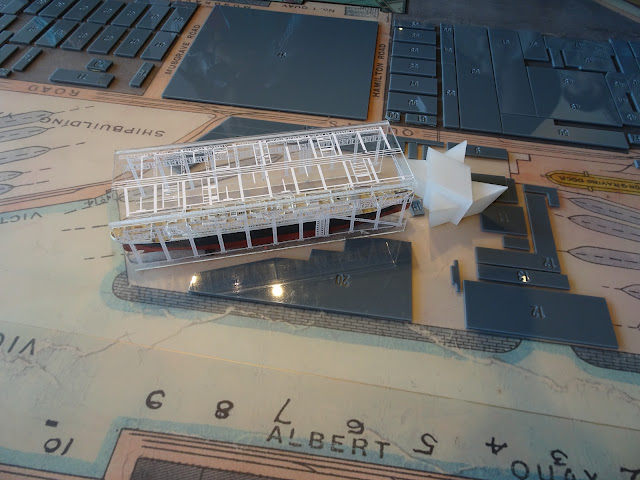 This model shows the museum to the right and the Titanic being constructed which gives you an idea of how enormous the construction area was. 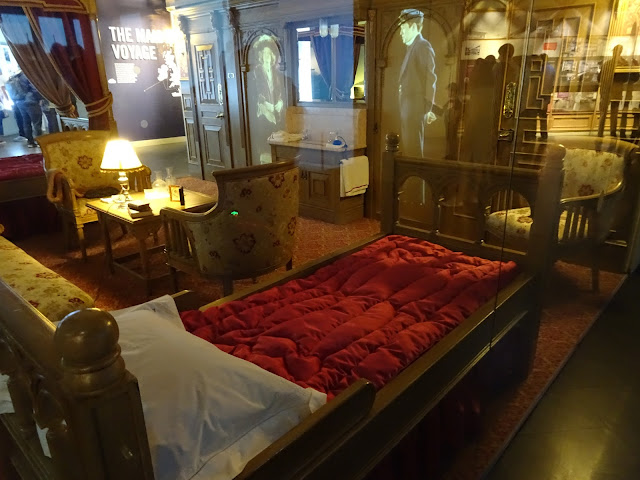 The reconstruction of a first-class cabin. 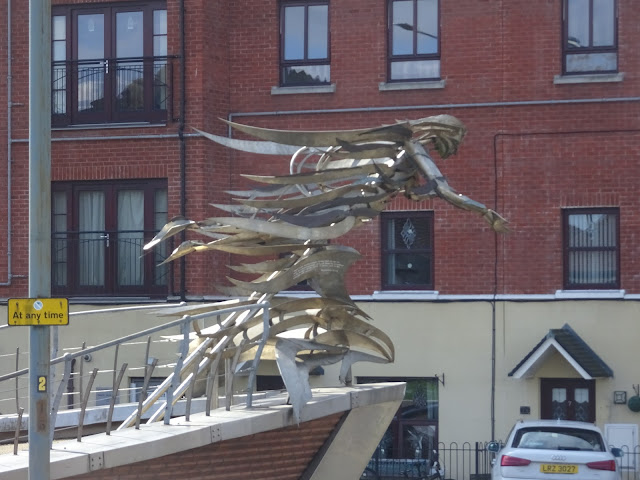 Metal sculpture of a ships figurehead as seen by Linda as our bus traveled back to our ship. 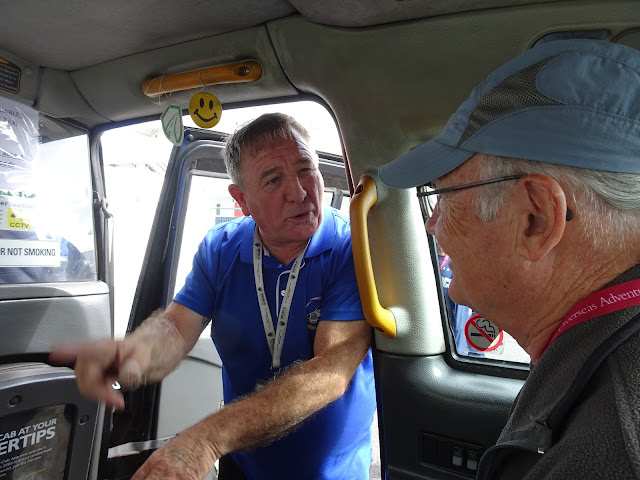 In the afternoon we had a very unique experience. It was a tour of a famous area of Belfast in a FTA black cab. These are not the regular taxis, but are a holdover from the days when the IRA, British military and the local police force engaged in an explosion of political violence in the late 60.s and 70's. Our guide/driver was a member of the IRA and at the age of 14 was shot in the back and arm. To say that he had strong negative feelings towards the British is more than understatement. 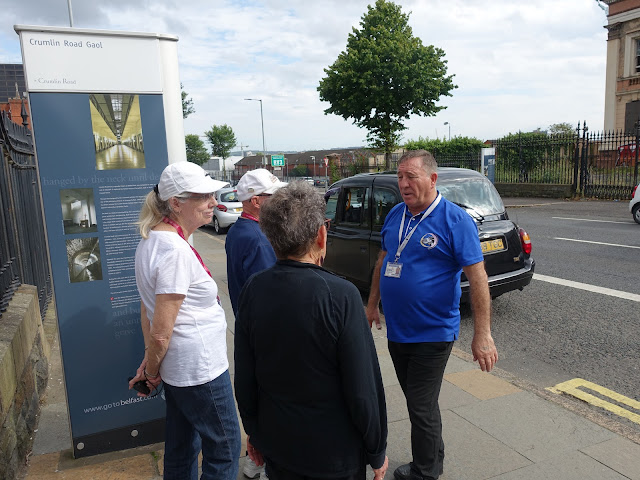 He took us around to a number of sites where there were memorials to those who lost their lives, whether in IRA leadership or just being in the wrong place at the wrong time. 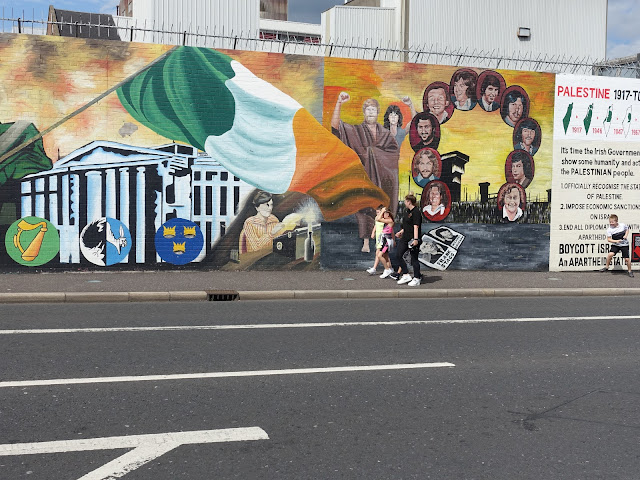 In one section the walls are covered with murals. 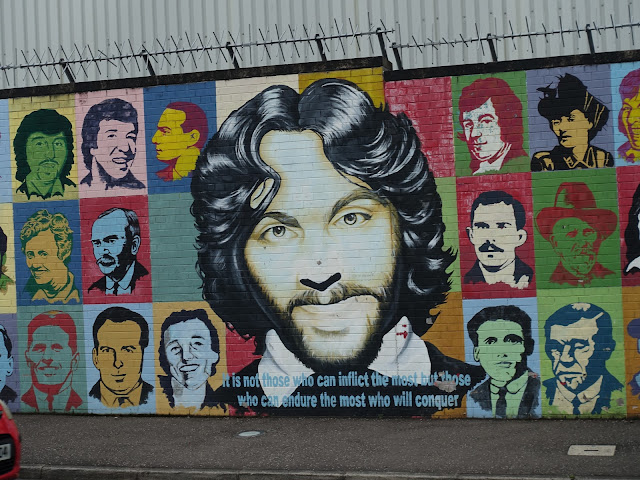 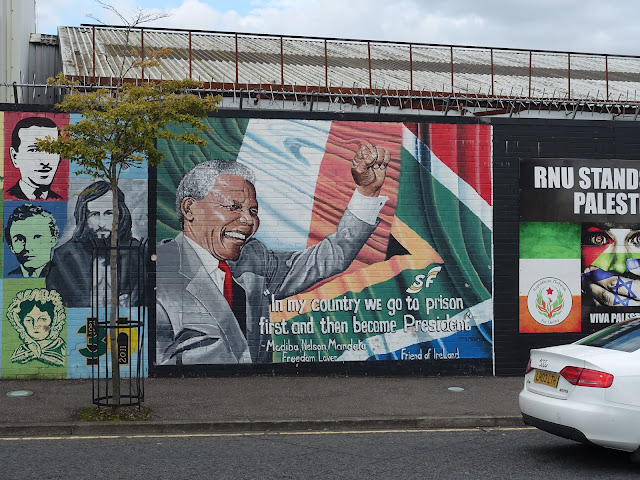 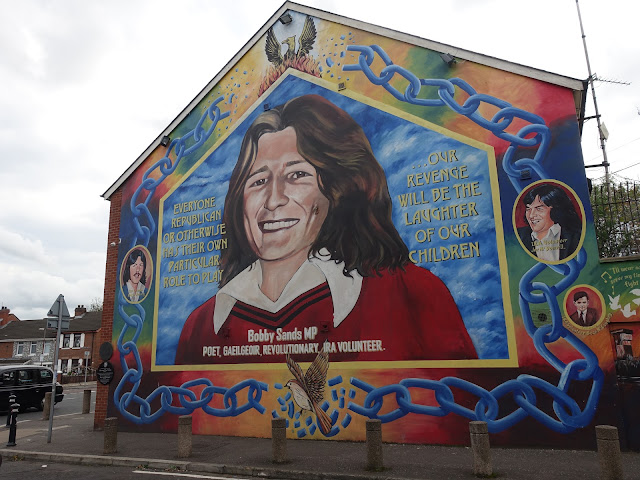 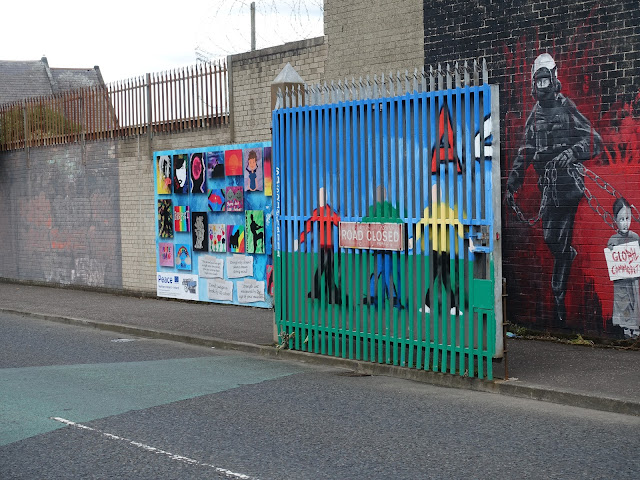 There are high walls and even higher walls, but the most astounding thing was that every night gates are closed that ball off the Catholic part of the city from the Protestant part. 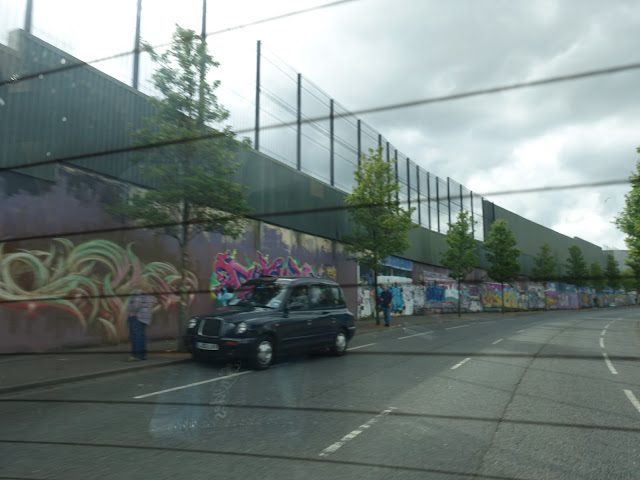 View from the back window of our cab. We are not talking some low fence here we're talking a serious separation of two groups of people, simply based on religion that don't get along. 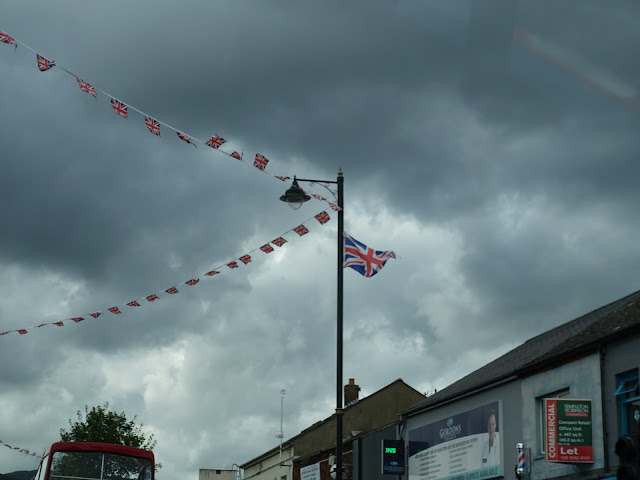 The Protestant sector, which was quite different than the Catholic section. Here many the buildings were older, in the Catholic section the British had razed many blocks of buildings during the fighting. It was obvious that nationalism was on display in the Protestant section. In terms of history going back to prior to 1690 it was different because that was the year the British conquered Ireland. When one thinks about what happened in our country, the fact we were British colonies and rebelled against them, the idea that the Catholic country of Ireland would like to once again be free of British domination causes one to realize that much of our information on Ireland comes from the British point of view. 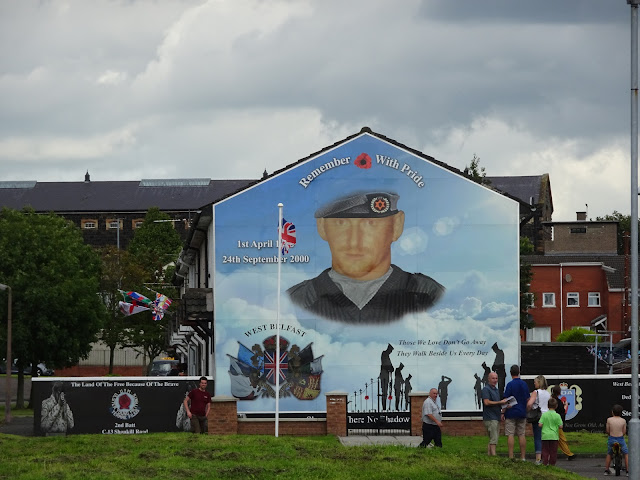 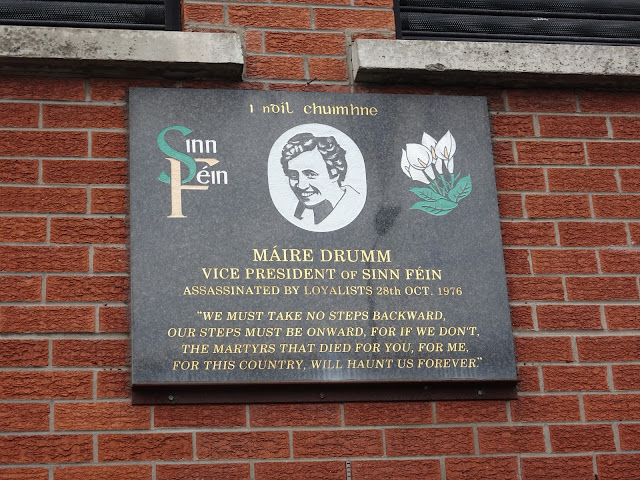 These two photos speak to the difference that divides the country. The one immediately above is a memorial to the  Catholic leader and vice president of the Sinn Fein, Maire Drumm. She was in the hospital when the person in the gigantic mural above her photo walk into her hospital room and shot her in the head killing her instantly. To me it says everything when he is remembered and idolized and that giant mural. When we were in the area where his mural was you could actually see the looks of hatred directed towards us as we got out of The Black which it that we were with Catholics. 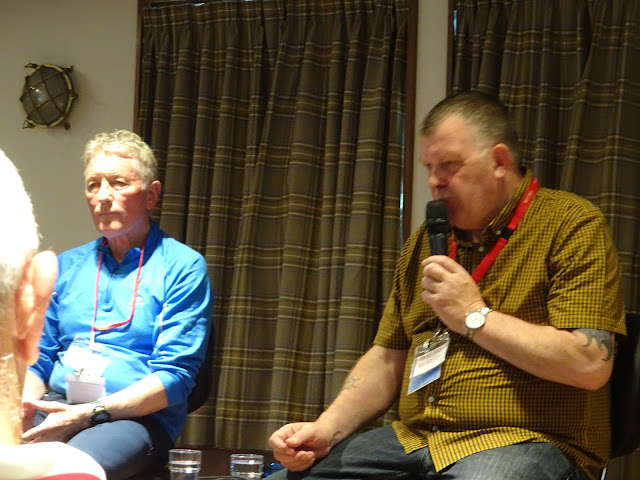 Not all Catholics and Protestants hate each other, these two men, the one on the left Catholic and the one on the right Protestant talk to our group back at the ship about not only the violence from long ago, but what the situation was today and how it will still be a long time until all the wounds are healed. 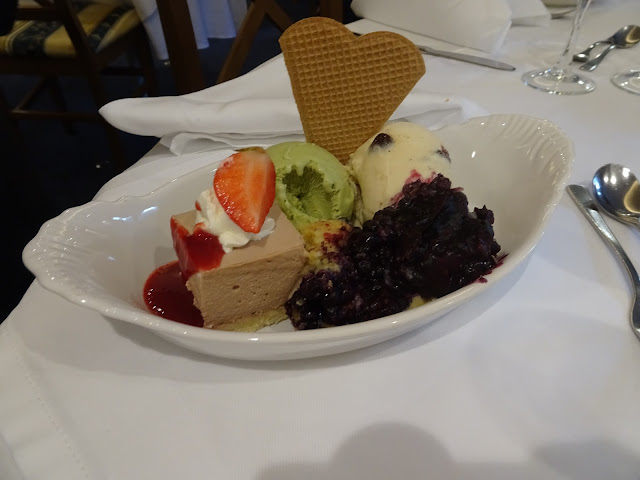 Not to lessen the seriousness of what we saw today, but how different our world is when we come back aboard the ship and can enjoy a desert like this, knowing that tomorrow we will move on to another location while the people here in Belfast have to live with their past and present day by day. As I've said many times, it's why we travel, because things aren't always what they seem, or what we hear as to other countries.