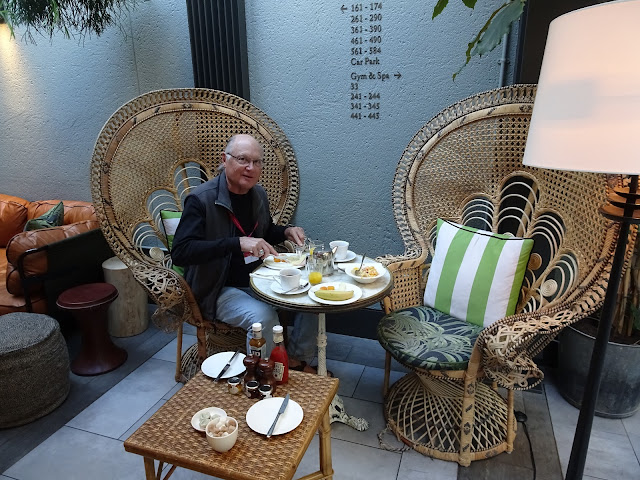 It was just after Linda took this picture of me enjoying breakfast, that one of the guides came up to us and informed us that there was a problem with the ship due to the weather. The wind was gusting with such ferocity that the ship could not dock. It would mean our boarding would be delayed by about three hours. 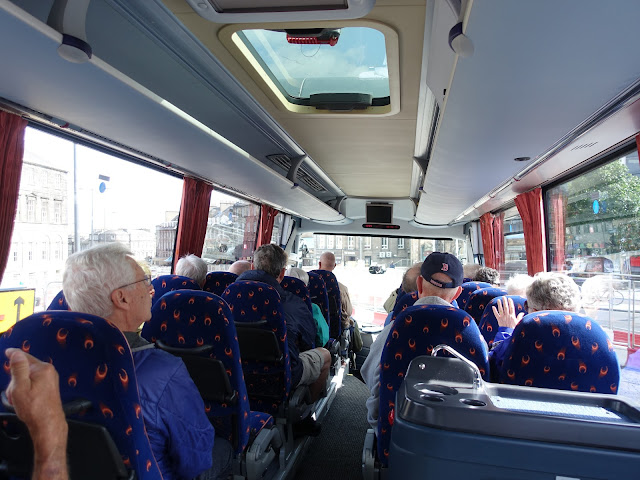 With checkout time at noon we were wondering how we would spend the next two hours, most likely just sitting in the hotel lobby as we would have our backpacks with us, and when we travel they are somewhat heavy. We headed down to the lobby at about 11;40 and discovered that things had changed, with a bus currently out front that would take us to the terminal. 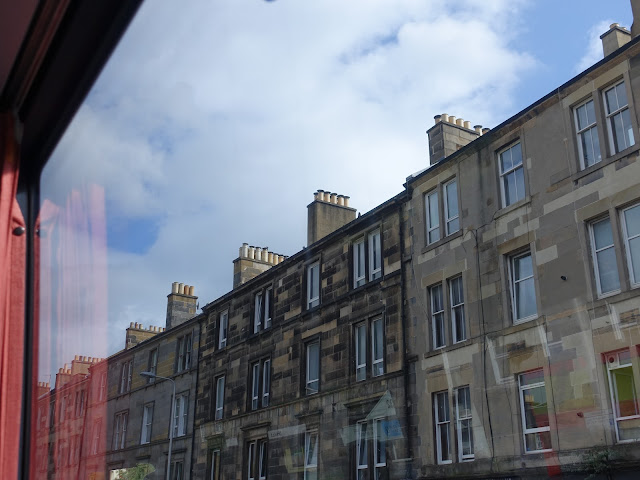 Chimney pot photo of the day as seen from the bus on the way to the terminal. 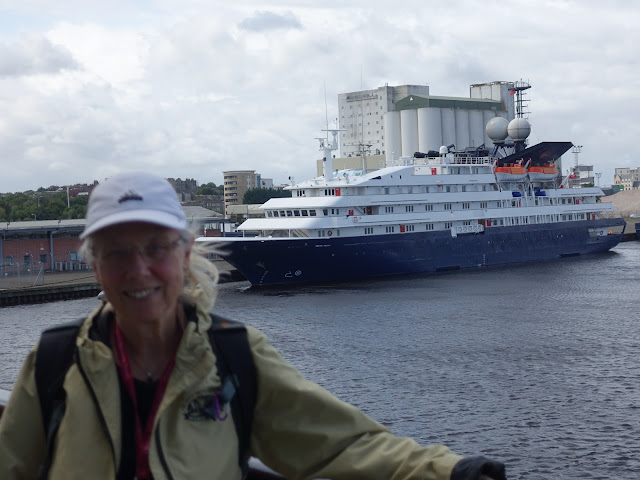 The terminal is located in a large shopping center, and is the same location we were at a few days ago when we visited the Britannia. After another excellent meal at a Zizzi's Pizza parlor, we stepped outside and lo and I was able to take a photo of our ship, the MV Corinthian that included this beautiful young model in the foreground. 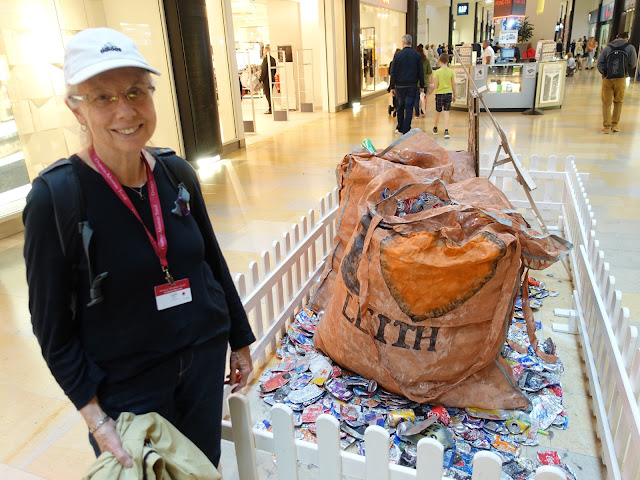 Sculpture inside the shopping plaza. And no, Linda did not confiscate any tab tops, though I thought I saw a definite gleam in her eyes. Good Linda 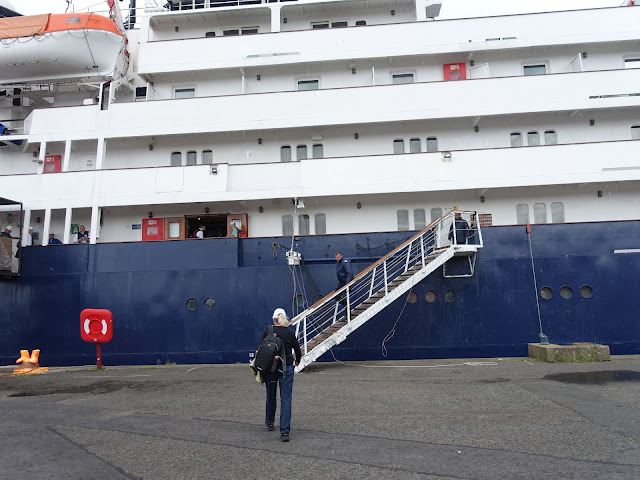 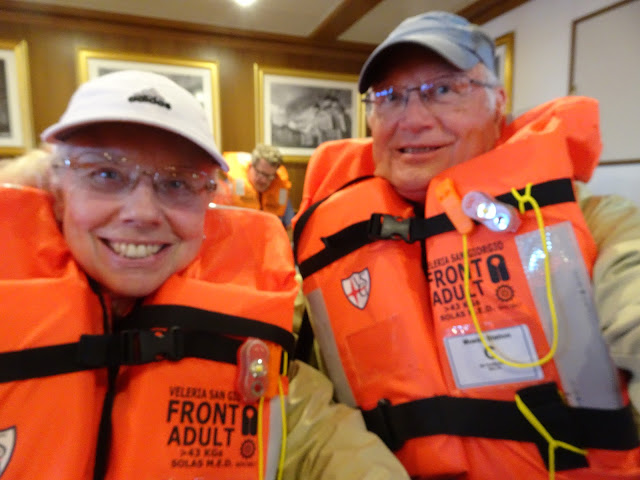 At the safety briefing and life vest donning. 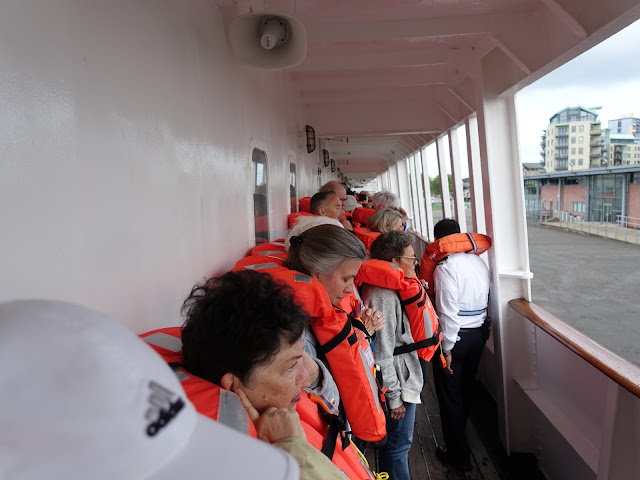 Something a little different, each group was taken out to where they would gather in case there was an actual emergency and we would have to board the lifeboats. 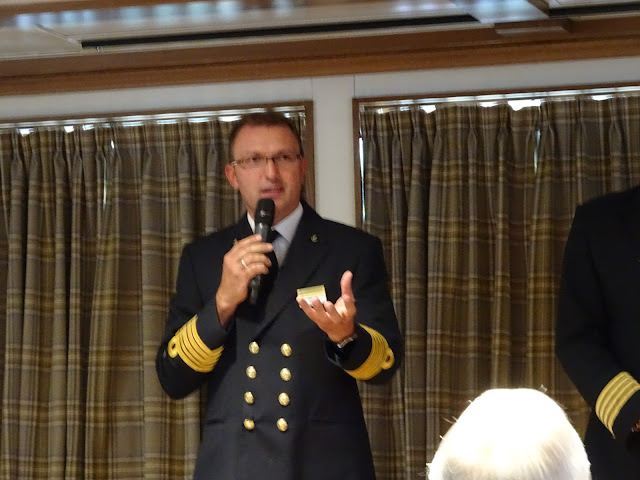 The captain,s greeting. Most of the ship's officers seem to come from Eastern Europe. Tomorrow night there is supposed to be an introduction of the crew. We had been told to be amazed at how quickly the crew would learn our names, and already we have been warmly greeted by name from a number of the crew. We are on an Outdoor Adventure Travel cruise, which is the more adventurous travel arm of Grand Circle Tours, with the ship being owned and operated by Grand Circle Corp.. 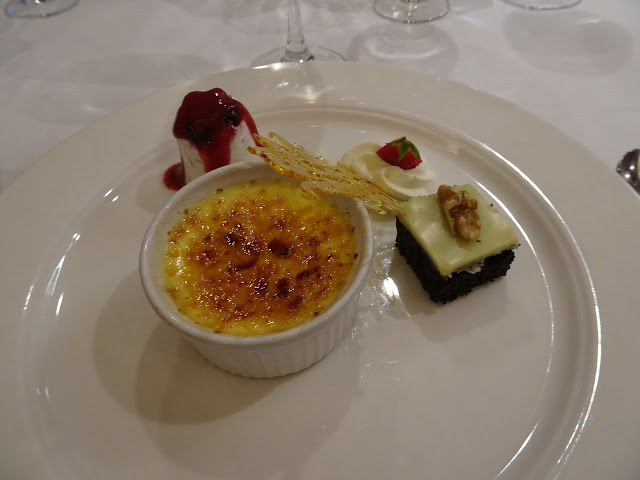 Tonight's dessert, crème brûlée and more. Neither of us can say enough about the food, it is far far exceeding any expectations we might of had. Also what they term the house wine, is most definitely not your run-of-the-mill house wine, it seemed like everyone at our table was getting refill after refill weather of the white or the red. And those that have been on these trips before are saying, it only gets better. I can only say, Linda did really good picking this trip. 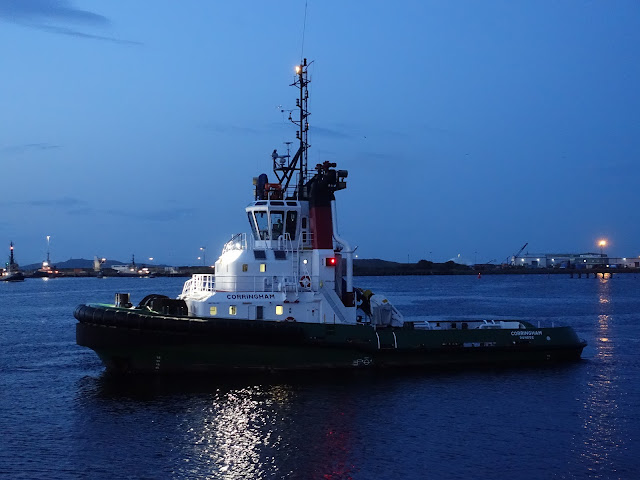 We had learned the winds are so bad this morning that even using two tugboats the ship could not navigate the channel to enter the harbor. The winds were still fairly strong, so the captain had selected to use tugs again to leave the harbor. 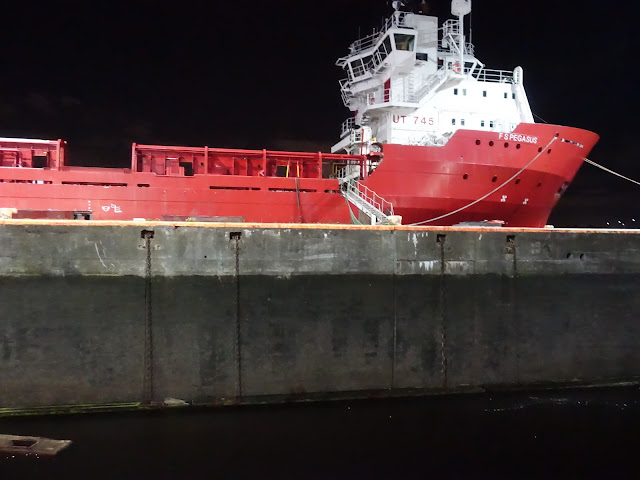 Later I had ventured out on deck to find a few other passengers watching what was happening. I know the photo looks a little strange, but to enter and exit the birthing harbor area, passing through a lock is required as the tides are so significant in this area. You can see by the dark area on the wall of the lock how far we had dropped below the ship that was still in the inner Harbor.

It looks like I will be able to post fairly regularly as the Wi-Fi in the ports will be good if not excellent. Watch me make a fool of myself if at the next few ports the Wi-Fi is really poor. Until tomorrow or whenever, label me Optimistic Bob.
Posted by Bob and Linda at 10:14 AM