Early Sunday morning bagpiper. I really don't think there is a sale on bagpipers, but at the Fringe you never know. One thing for sure, the streets are not nearly as crowded as they were on Saturday. 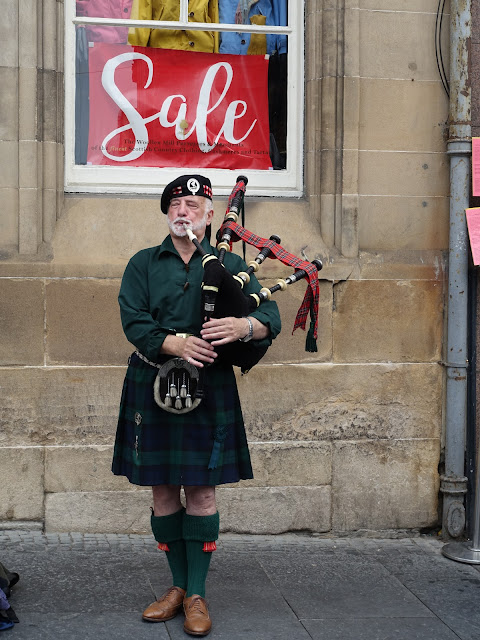 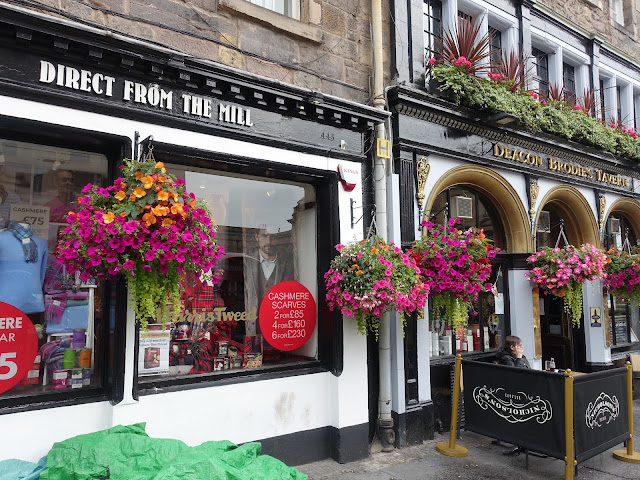 St. Giles Cathedral. On the first Sunday of the international Festival they celebrate a special service with many dignitaries in attendance. That was not really the reason we were here though we enjoyed it, the reason was for who once preached at this church. Linda and I are lifelong Presbyterians, and the Scotsman, John Knox, is the "founder"of Presbyterianism. I have several ancestors who came from Scotland to the US. One of them had two brothers who were Presbyterian ministers who also came to the US. It was a way of indirectly touching my past. 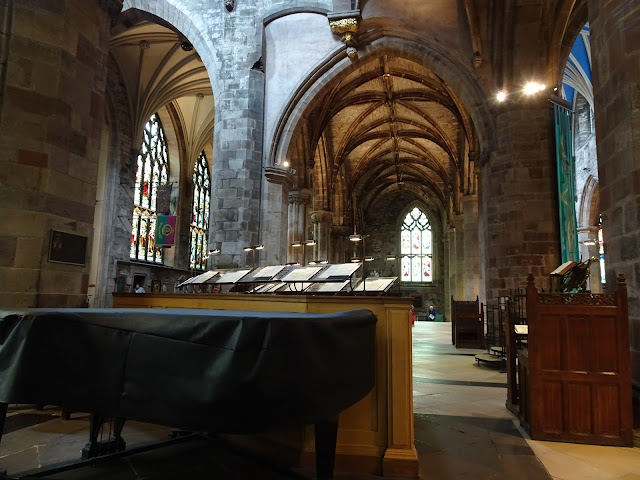 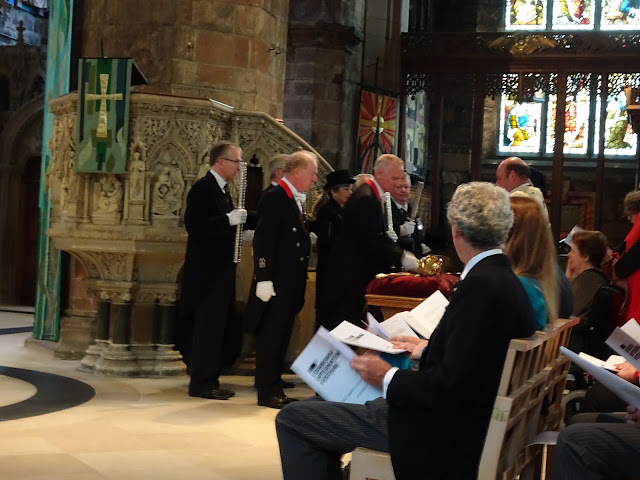 Fun with mirrors. You're only as old as you think you are and sometimes it's fun to act your age 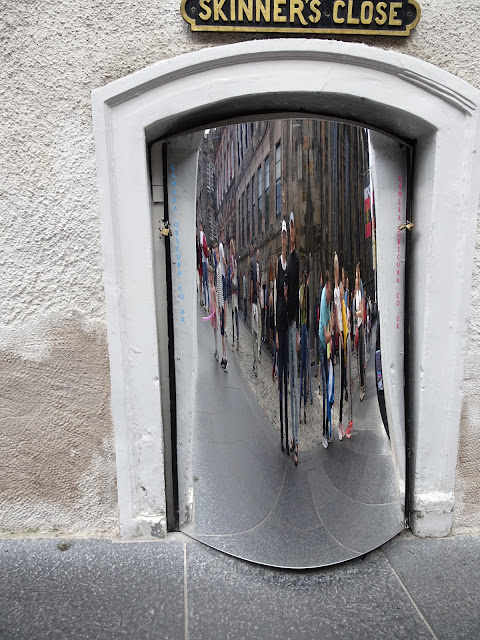 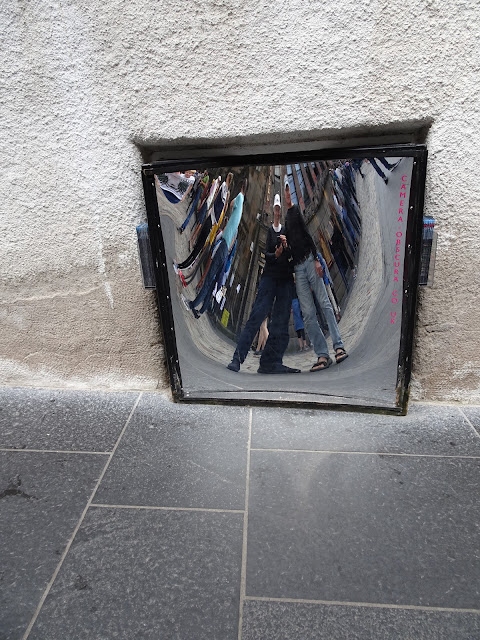 A magician who set up in front of St. Giles church. He really knew how to draw a crowd and entertain them, Linda and I included. And yes, we certainly contributed once his show was over. 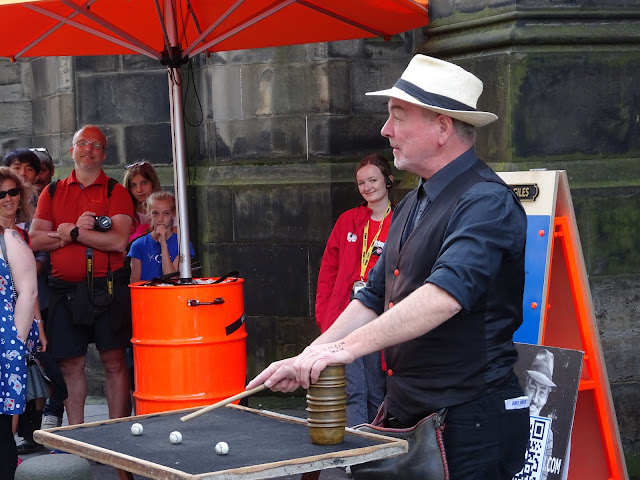 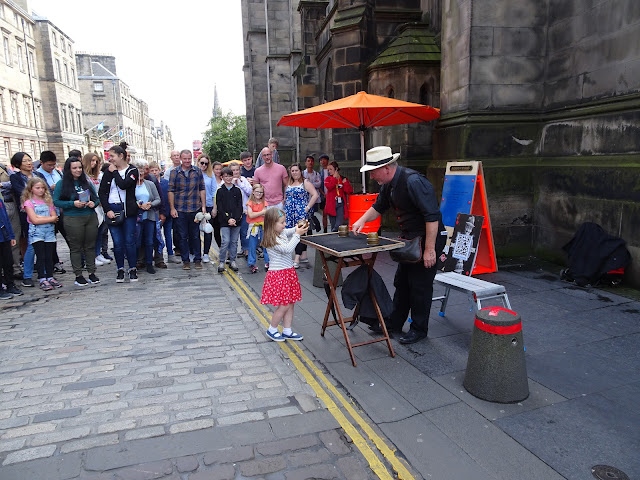 While we are here in Edinburgh we are going to see the military Tattoo. Somewhere near the top of the red seats above Linda's head is where we'll be sitting. It's about a week and a half until that happens and let's hope the nice weather holds. The forecast for this coming week is rain every day in Edinburgh, but since we will be in the Highlands hopefully it not be raining there. 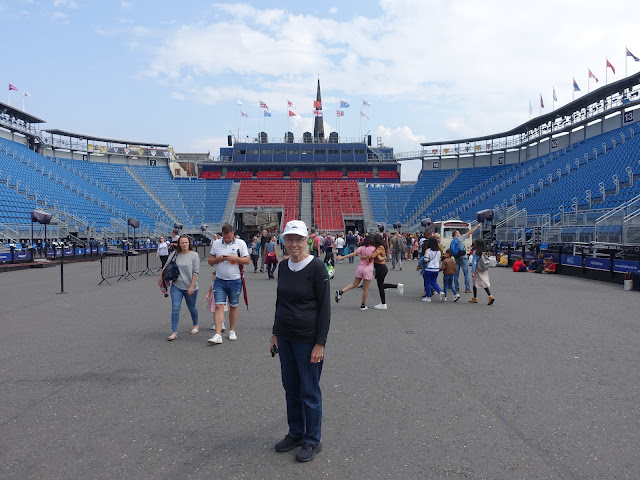 Before the tattoo we are going to be treated to a special meal, whiskey tasting, and tour of The Scotch Whisky Experience. It is right outside the gates of the castle where the tattoo is held. 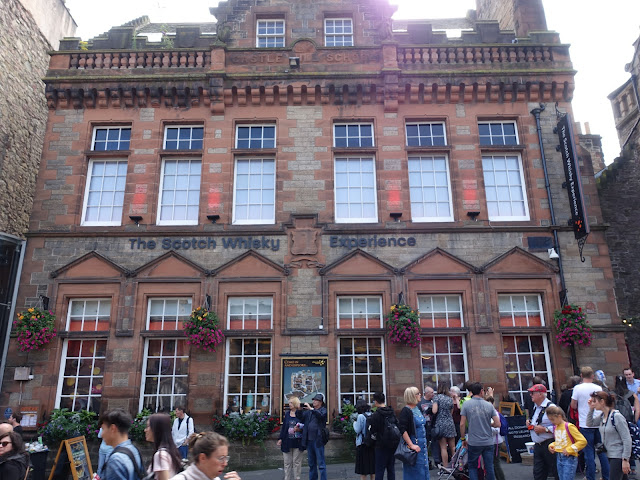 It looks like The Scotch Whisky Experience is really something. Just look at all the people rushing to enjoy it. 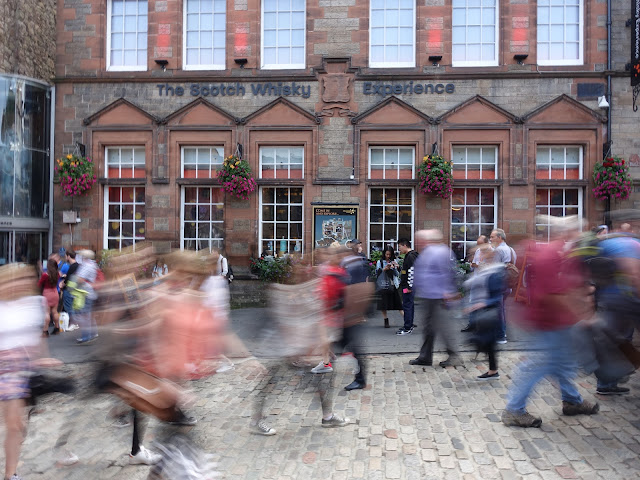 It's hard to believe that people get so excited about the Scotch Whisky Experience that they have to rush about. And no, there was anything wrong with my camera, I was just having fun with some settings see if I could take a picture with the background in focus and any motion blurred. I'd say I exceeded my expectations 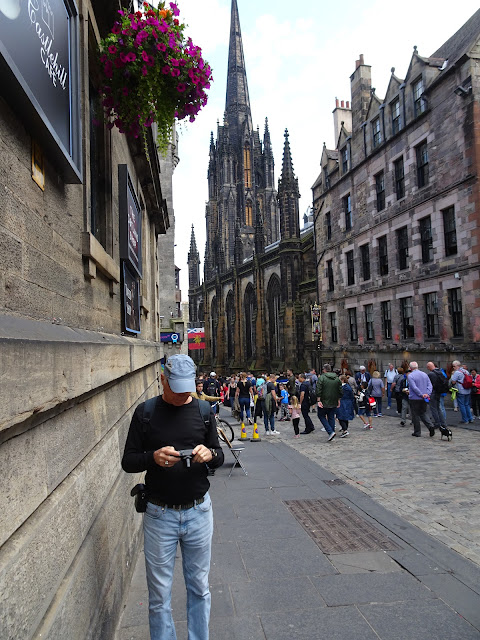 It dawns on me I have been remiss in posting food photos. I'd better be careful or I'll have to give up my blogger badge, after all that's what bloggers do. they post food photos. Let's start off with a little refreshment. 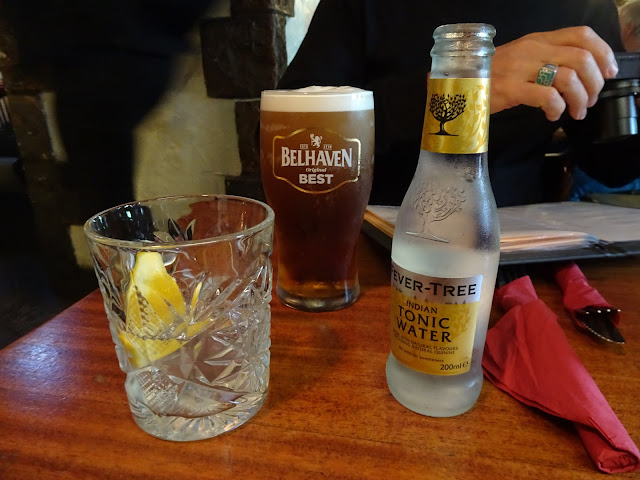 We are continuing our habit of basically only eating two meals a day. We ate at a pub today and this is my pork and haggis, Scotch egg with salad and chutney. Two things I don't eat are egg yolks and boiled eggs. Maybe it's that Scotch ancestry I have, or maybe it's just that they are so good, but my ban on boiled eggs and egg yolks does not include Scotch eggs. 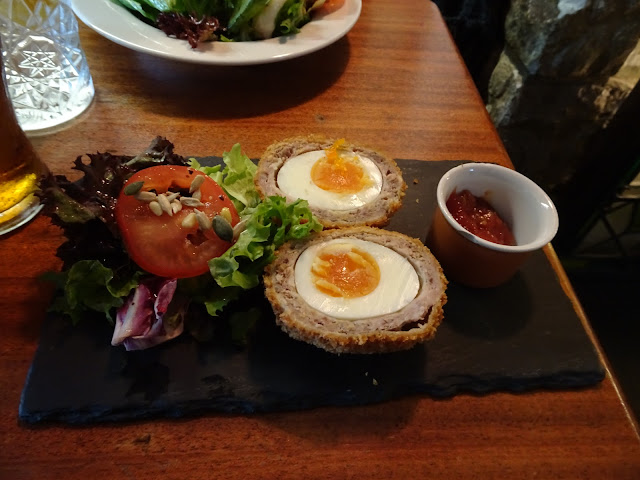 As we walk around we see all these tall cylinders with flyers for different shows on them. And we just had to wonder how did they get the ones all the way up to the top. Obviously, if you're there long enough you will learn the answer. Actually it's rather inventive. 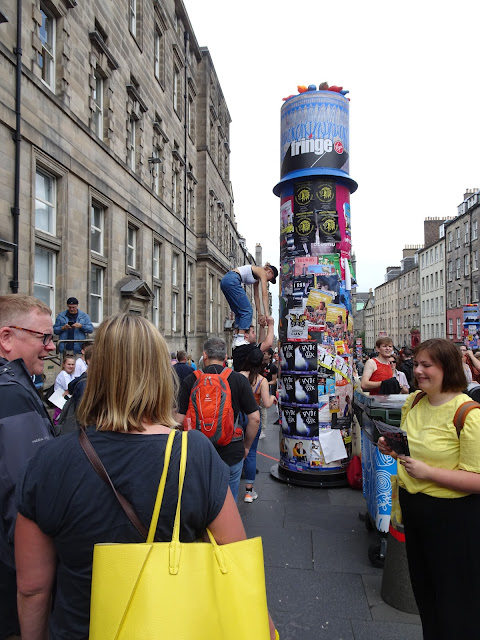 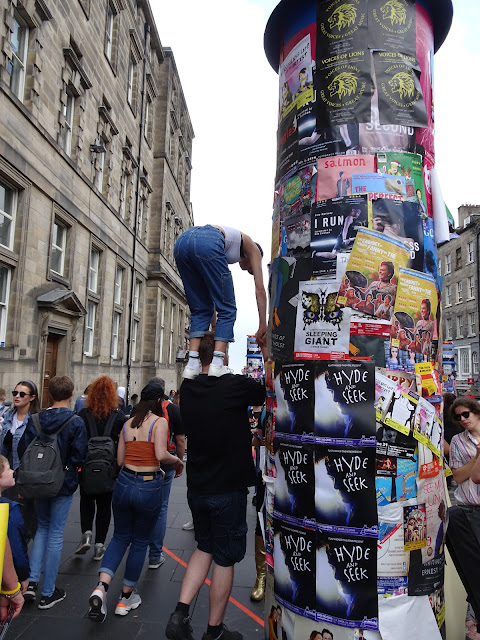 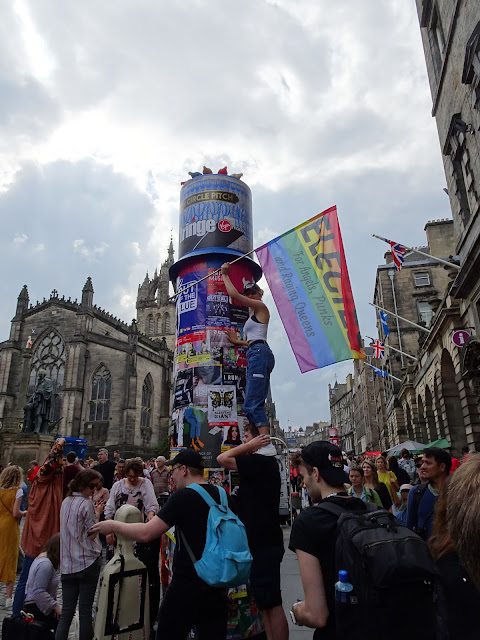 Oor Wullie (English: Our Willie) is a Scottish comic strip published in the D.C. Thomson newspaper The Sunday Post. It features a character called Wullie Russell [source: Wikipedia], and all over Edinburgh are statues of Oor Willie. If I recall correctly Jackson, Mississippi had horses or pony statues and I know we've been in other towns in the US that have other statue themes, but I have to say the Oor Wullie statues beats them all. Score one for Scotland. 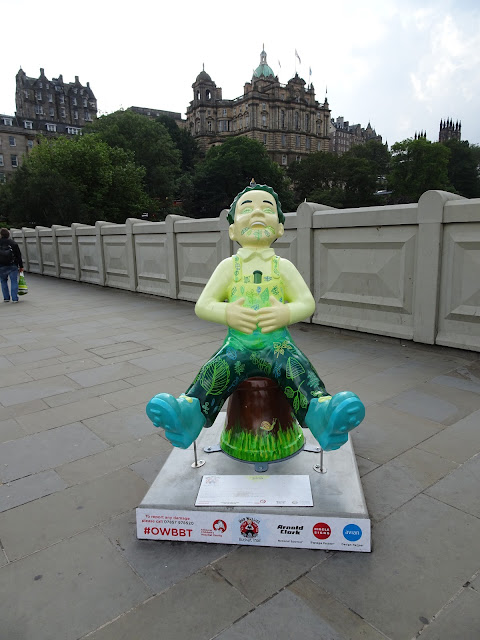