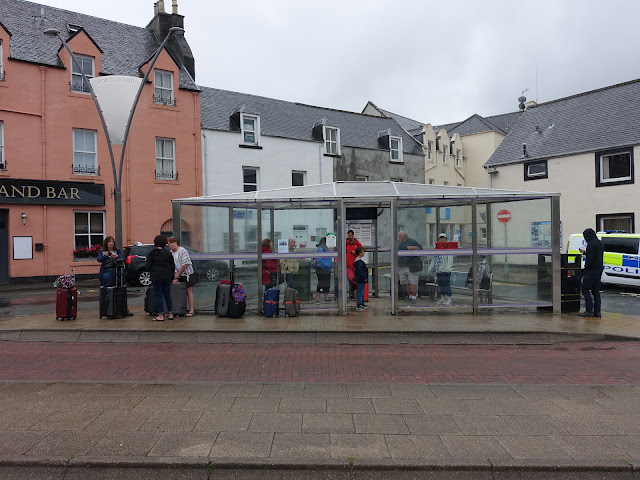 We've learned that in Scotland when the weather is sunny it's an unexpected happening and when it's raining it's normal. I think that to date there's only been one day when there hasn't been rain at some time or other during the day. 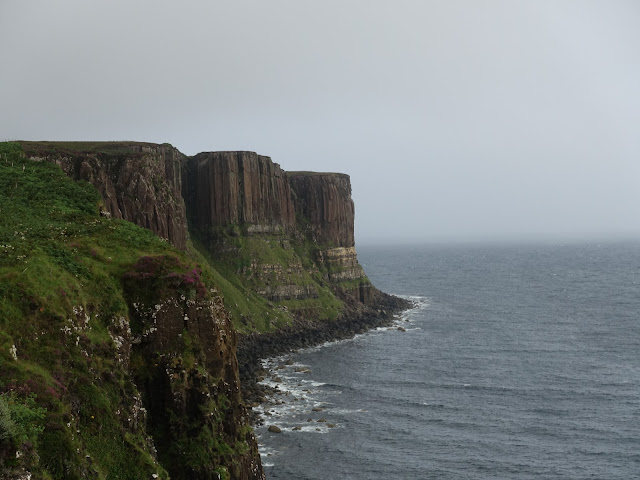 This is up near the north of the Isle of Skye and is called The Kilt Cliff. There is a Scottish myth as to how they came to be. As told by our guide Gillian, there once was a giant who live nearby and had a beautiful wife. Across the way in Ireland there was another giant and he saw the beautiful wife of the Scottish giant and decided to come over and take her back to Ireland. As he approached the beautiful wife had an idea, she told her husband to throw off his kilt which he did against the cliffs, then lay down and she would shave all the hair off his body. She told him to go lie on the floor of the other room and when he heard her talking to the Irish giant to begin crying like a baby. The Irish giant came and was just about to take the beautiful woman away when she screamed out she couldn't leave her baby. At that moment her husband began to cry and fuss like a baby, the Irish giant peaked in the room and asked what that enormous baby was. She replied it was her husband and her baby. The Irish giant cried out if the baby is that huge your husband could squash me and turned around and fled back to Ireland. On the way he smashed the causeway that he walked over to get to Scotland. As you might imagine the Irish version of the story is definitely different. 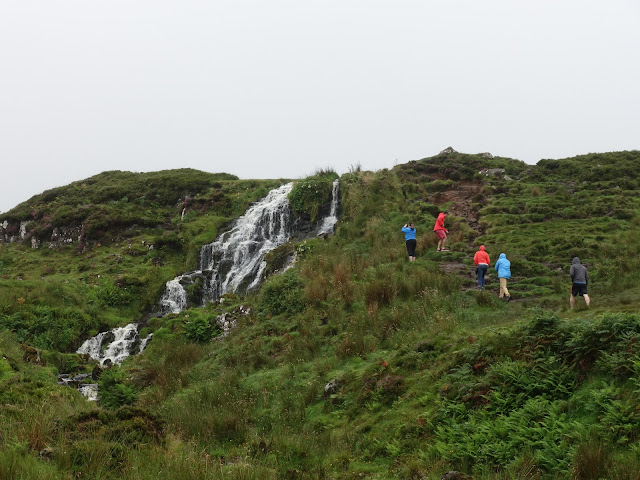 Another place another Scottish myth. It said that if you take a mouthful of water from the very top of the waterfall and bring it down to the very bottom behind where I took this picture and spitted on the rock that is there you will have seven years good luck. One of the people in our group actually did that. It sure wasn't Linda or I. 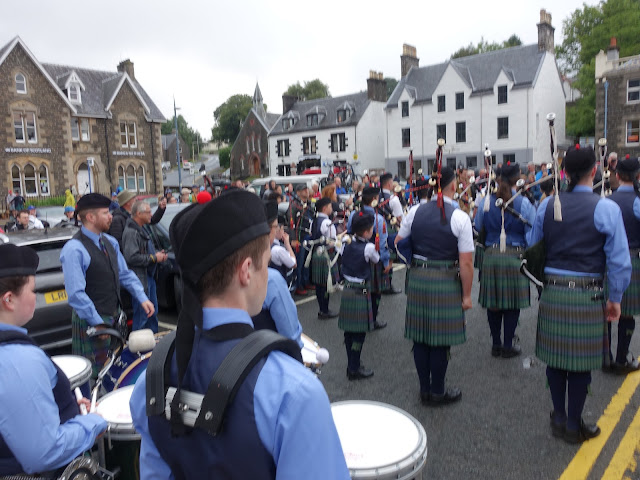 The Isle of Skye fife and drum band getting ready to lead the procession up to the Highland games arena. 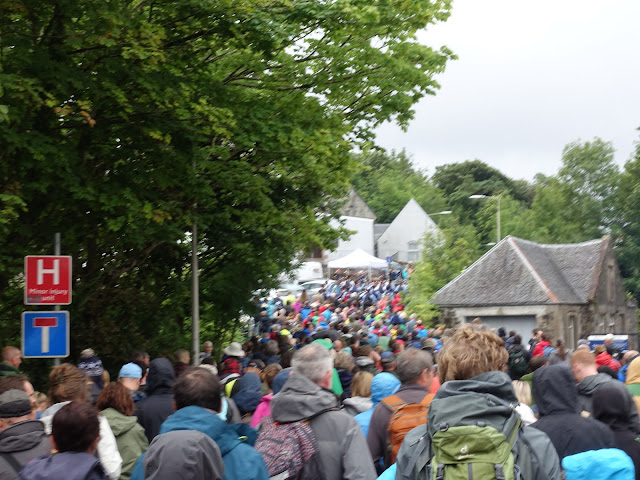 Would it look like back in the masses following the band. 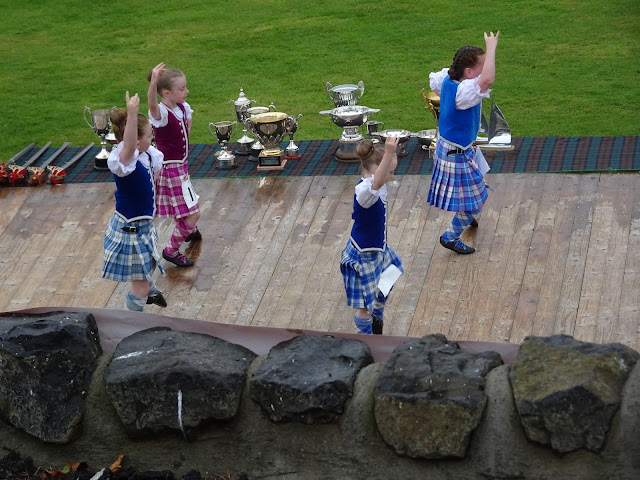 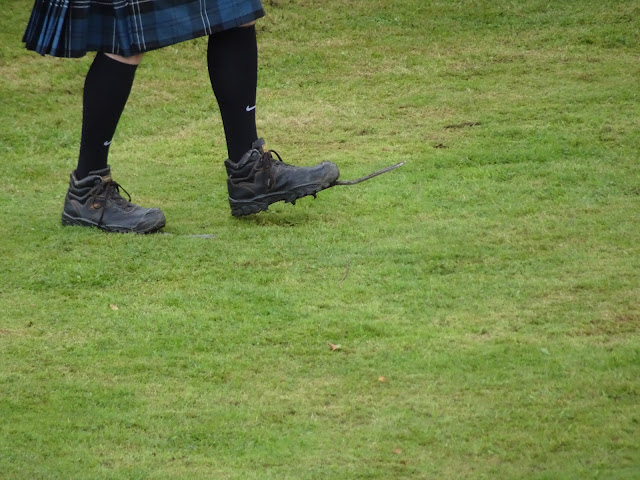 While the games were interesting the weather and the fact that we had to stand the entire time was not so great. Besides, you can see all kinds of videos of Highland games on YouTube. 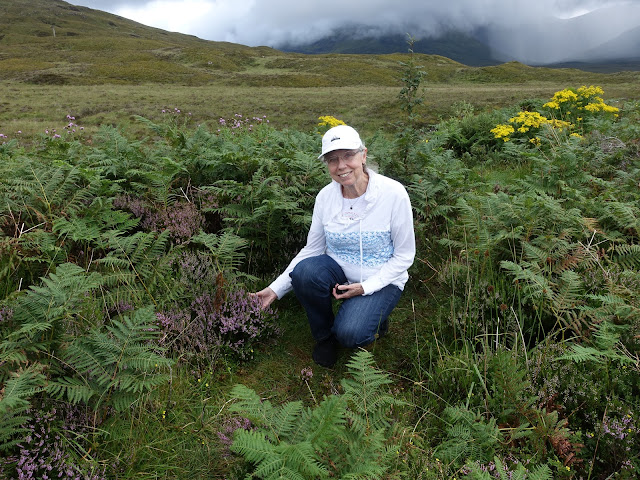 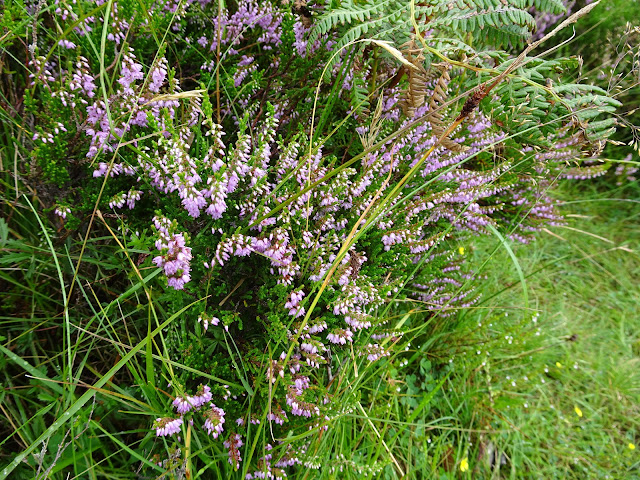 I've read many stories over the years that were set in Scotland and always tried to imagine what Heather on the moor look like. Now I know. 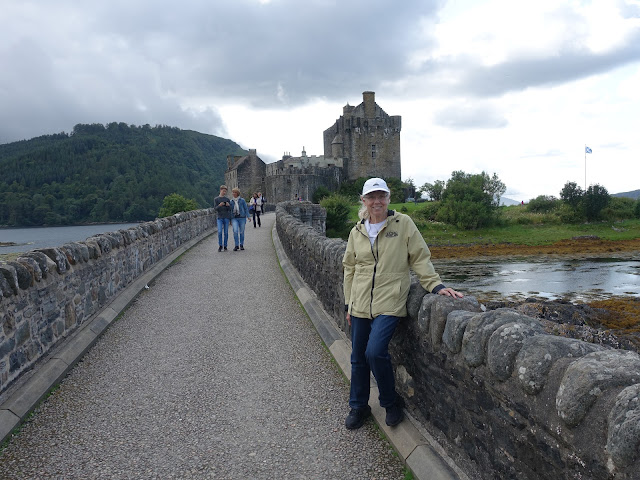 Scottish castles seem to be the equivalent of European cathedrals. One is great, two is nice, more is the same thing over and over. 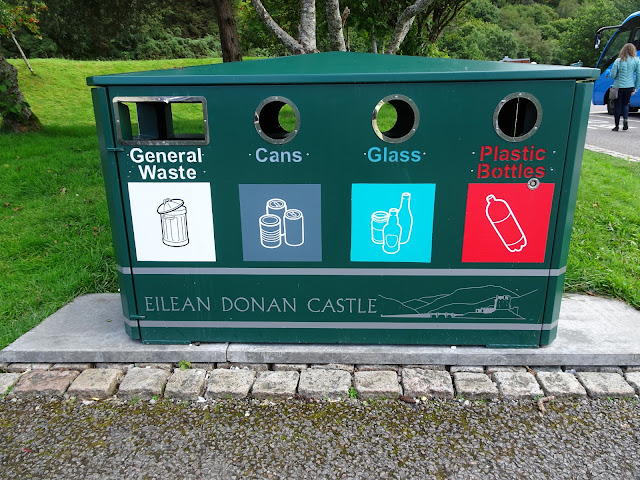 They are really big on recycling over here. 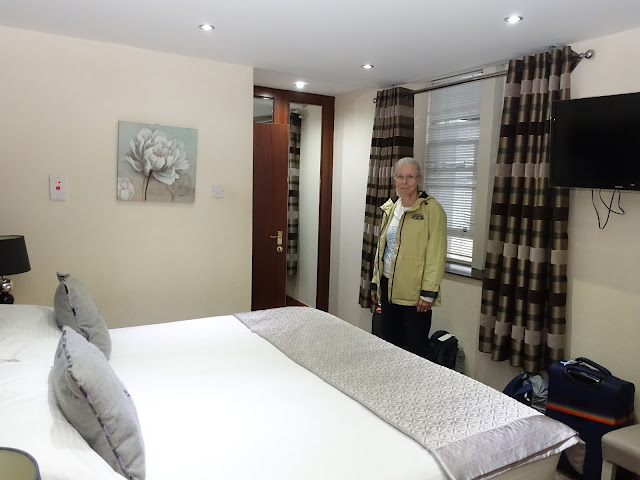 The places we have been staying at on this tour are what might best be described as quaint. Along with quaint is small as in the rooms are small. However since we are on the go almost all the time and really, the only time we spent in the room is to sleep and get ready for the next day, they actually are big enough. 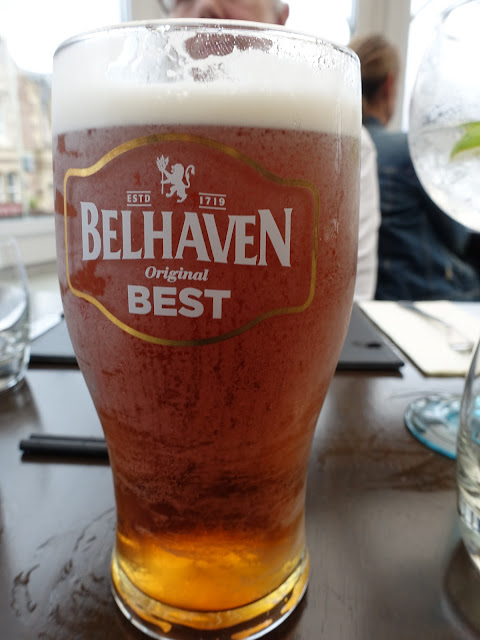 I know I've mentioned a timer to that I prefer ale. As we traveled around I've got the sample the local ale in a number of different towns. I have yet to find one that isn't excellent. 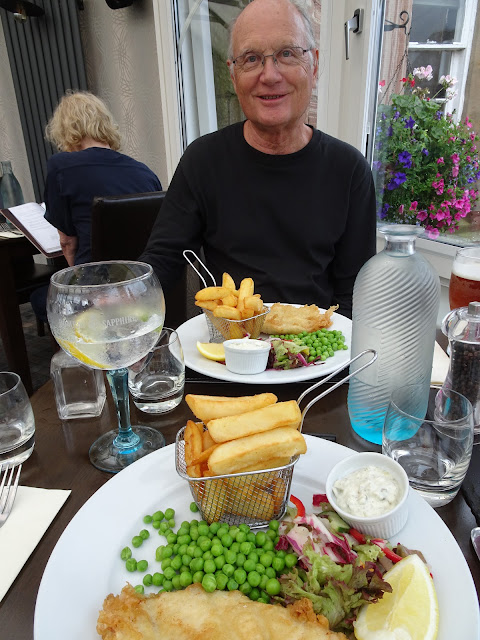 As you can see Linda is not an ale girl, it's the nightly gin and tonic for her. Since were at the shore we decided to go with fish and chips tonight. It was a great choice. 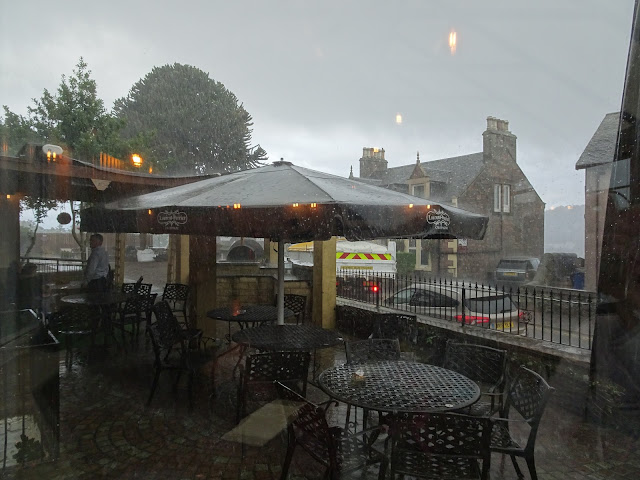 While we were eating a horrific cloudburst took place. Having been through a few of those at Retama, this was right up there with the best of them. 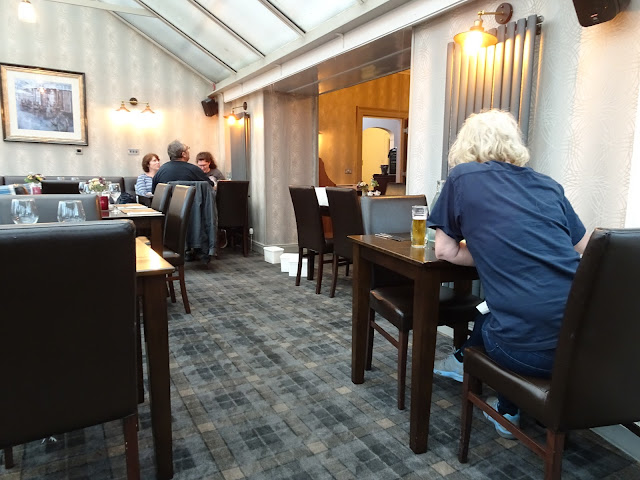 The view from our table towards the entrance to the dining room. The ceiling was glass and the sound of the rain was so loud you couldn't talk. 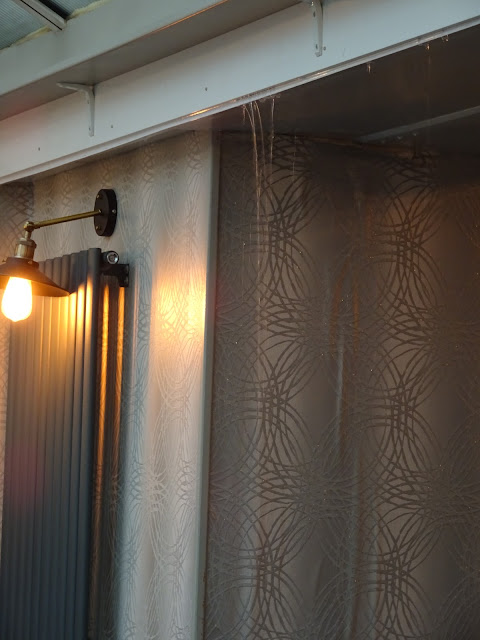 If you look at the vertical piece near the top of the photo you can see rain pouring off of it into the dining room. 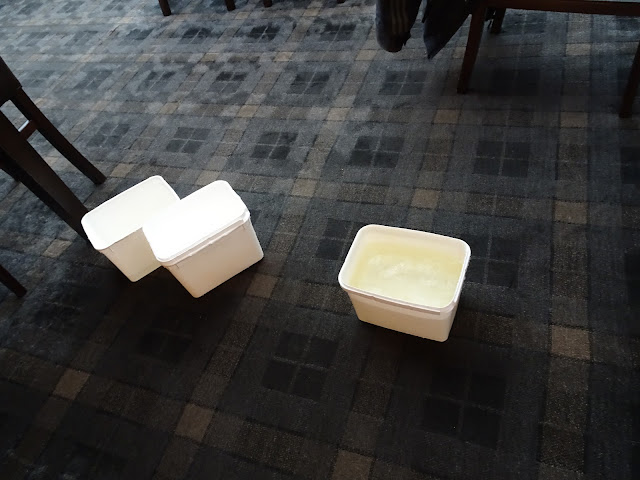 And on the table to the left and across the floor were buckets to catch the water. It reminded us of our meal we had a few years ago in Stockholm when the rain runoff came in through the door of the restaurant we were eating at and everyone simply raise their feet and put them on the base of their tables while the staff you squeegees to push the water back out the door. Some memories are priceless.

Email ThisBlogThis!Share to TwitterShare to FacebookShare to Pinterest
Labels: Scotland, The Isle of Skye