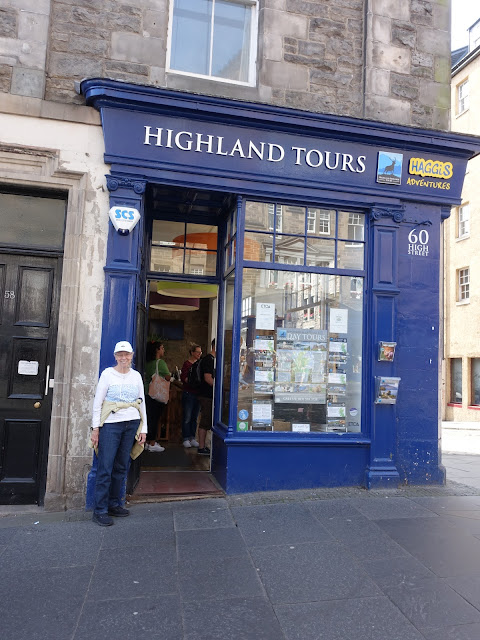 Our first stop this morning was at the Highland Tours office. Actually it was just a walk by and pose for photo stop, but come Monday morning we will be here to depart on a week tour of the Highlands. But this weekend and next we will be on our own in Edinburgh. 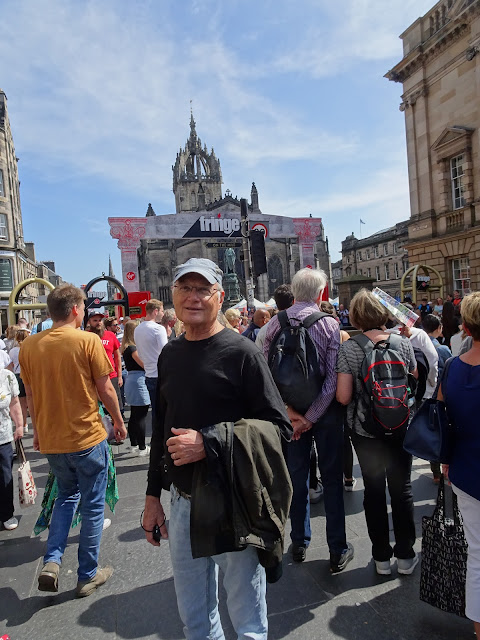 When we made plans to come to Edinburgh we didn't realize that August was when the annual Fringe event was held. If you've ever heard of a Fringe event, this is where it all started in 1947. The Edinburgh Fringe has grown to be the largest cultural, arts and street festival in the world. Think of over 50,000 performances, 3500 shows at over 300 venues and that's just the shows. Add in buskers, street performers, living statues, plus arts and craft markets and it still doesn't begin to describe Fringe. 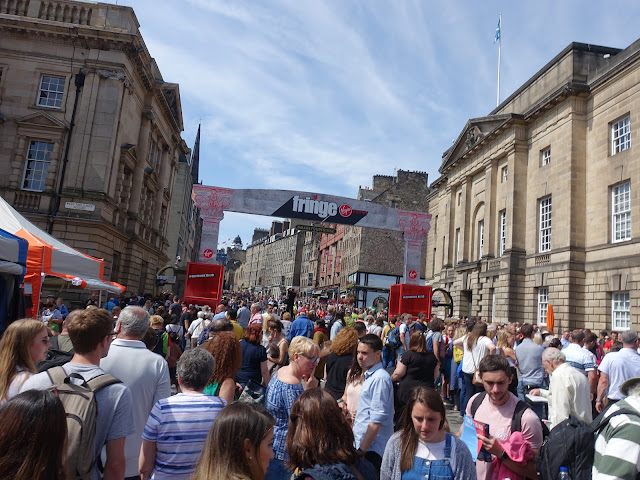 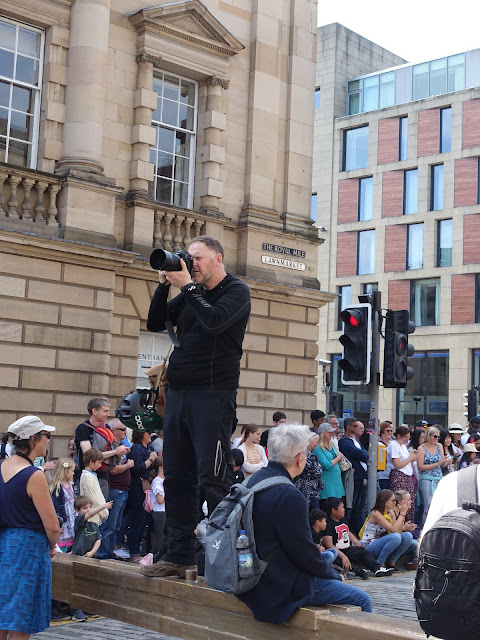 The interesting thing is that just as fascinating as all the performers is the people watching. This fellow was standing on top of a barricade to get a shot of the crowd down the street. 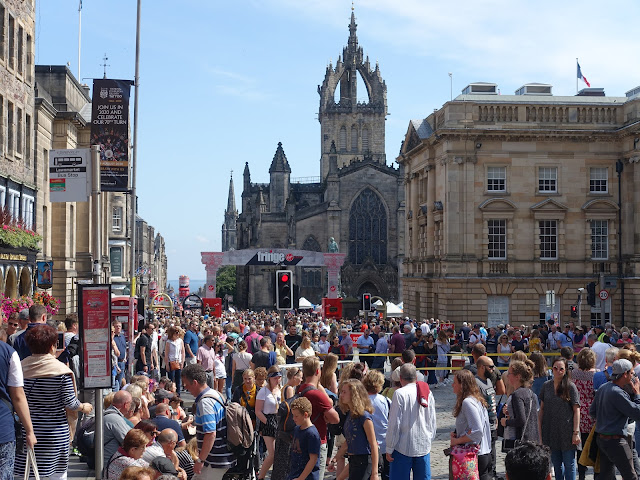 This is what he saw, this is what you try a walk-through, this is what you call people gridlock. I tried to find an estimate of how many people there are at the festival but couldn't come up with a number. Perhaps the word countless is the best way to describe it. It truly is one of those, you have to be there to experience it to understand it happenings. 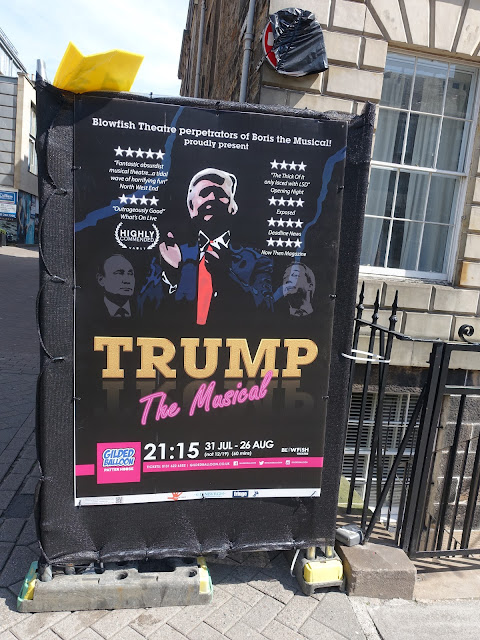 While the buskers and street performers are literally on the street, in the other venues you can literally find every kind of performance imaginable. Since we are going to be here two weekends we decided we'd spend this weekend getting a feel for everything that was going on, spending a lot of time on the street at the next weekend probably go to some performances. Can't say we will be going to this one but it definitely looks interesting. 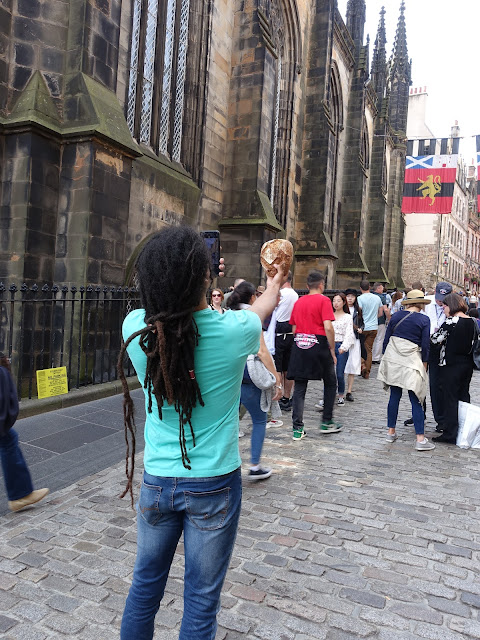 Back to people watching. There is obviously a reason why this fella is taking a photo of the bread loaf with the flags and the unseen castle in the background. 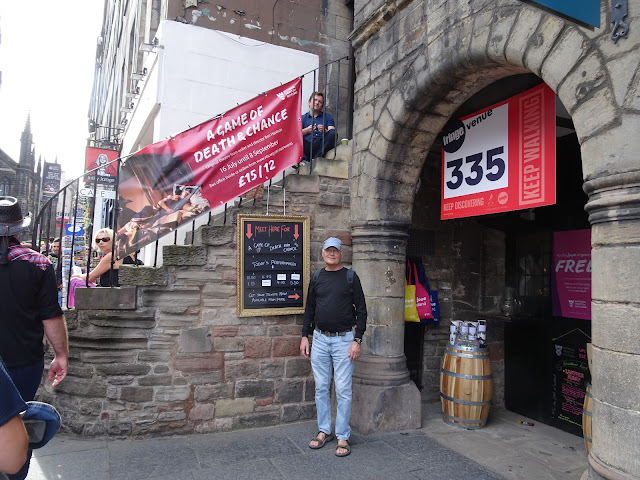 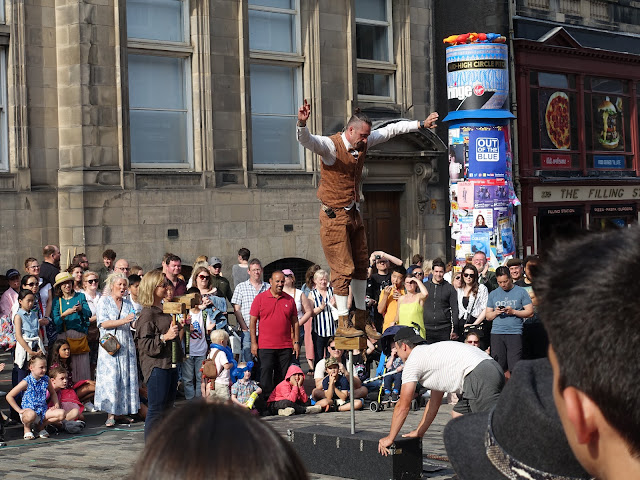 Buskers and street performers are everywhere. This fella came from from Australia. The street performers, buskers, and the living statues all make their money by you feeling moved to contribute something after their performance. The most interesting thing about all the events of every type is that whatever anyone wants to put on perform etc. is welcomed. The free catalog of the events is nearly 400 pages long with between eight and 12 events on each page. Deciding what you want to go and see is not easy. But everywhere you walk on the street there are people handing out small flyers that describe their show. I picked up several today one is for Grease, the other is called Forbidden Fruit and is put on by the mermaids performing art fund added only costs a paltry 7 pounds.

A brief video of the above performer. 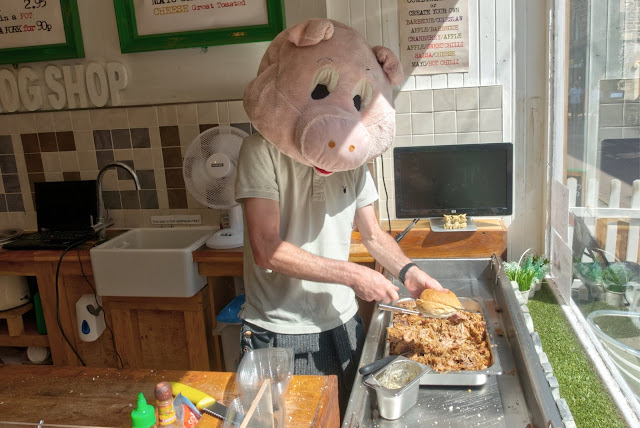 I guess you could say that everyone gets into the act. We grabbed some pulled pork at The Hog Shop. Let's just say that the barbecue we get back in Texas has no worries. 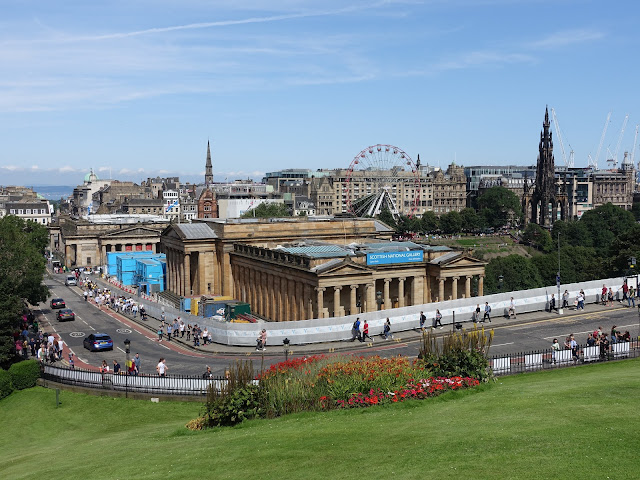 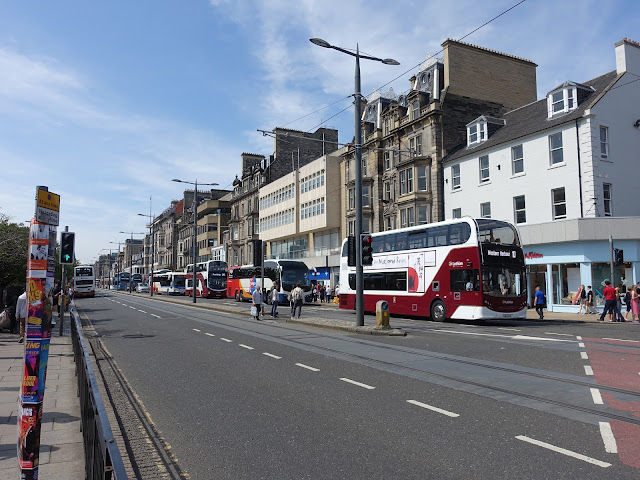 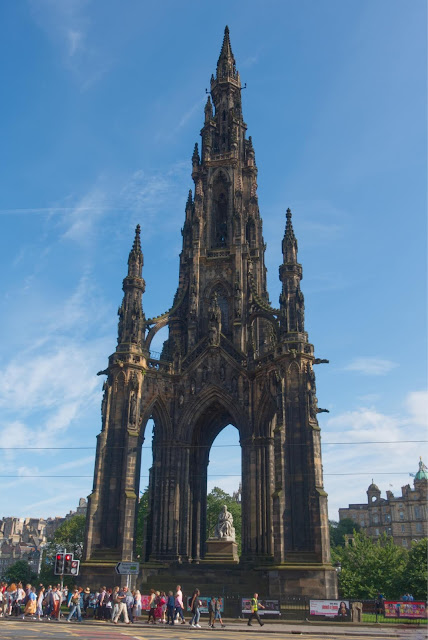 Some views of Edinburgh. With the festival in town the streets are literally wall to wall with buses, buses that often time have a hard time moving. Even with the unbelievable crowds we are so glad that we are here this is one of those unique StumbleUpon happenings that only makes us even more glad we are travelers.