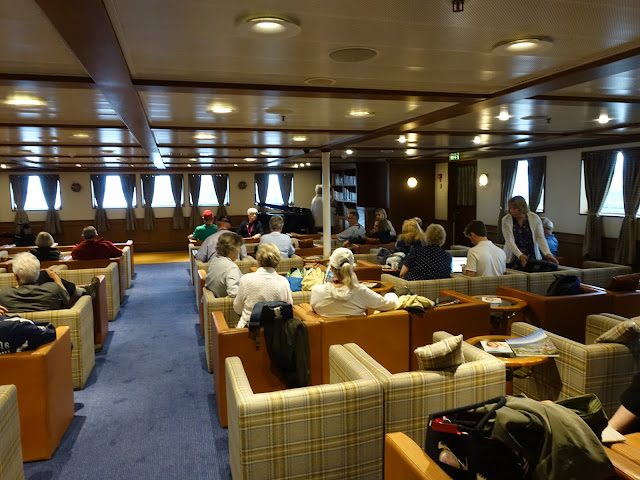 Anyone who as traveled by ship knows what this. Wait in the designated area until you were called, disembark, go to the luggage area and find your bags. 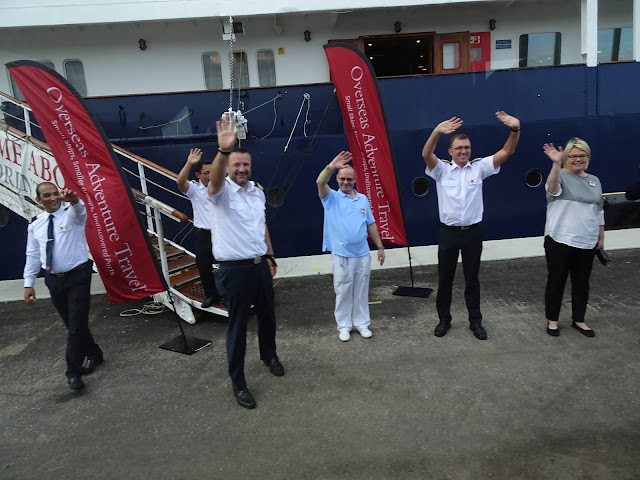 This is the reason why we dislike going on the larger ships. These people actually learn our names and made us feel not like passengers, but as friends. This will definitely be only the first of our OAT small ship adventures. 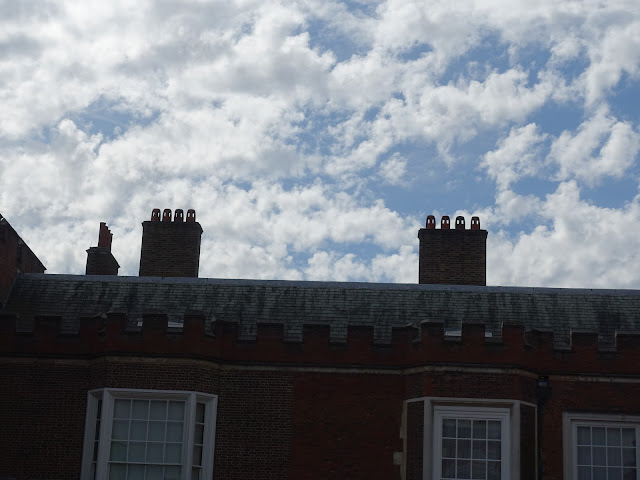 Chimney pots silhouetted against the sky. 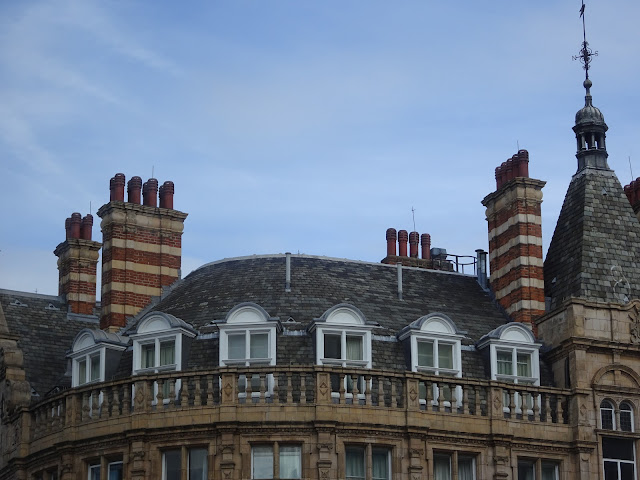 And how about this one, striped chimneys. That's a first for me. Amazed Bob. 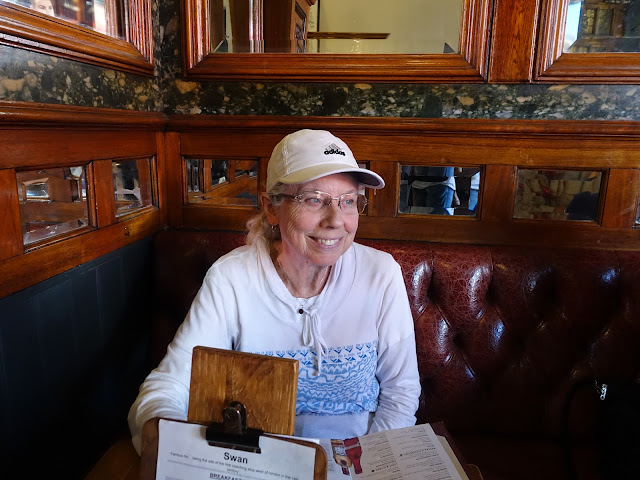 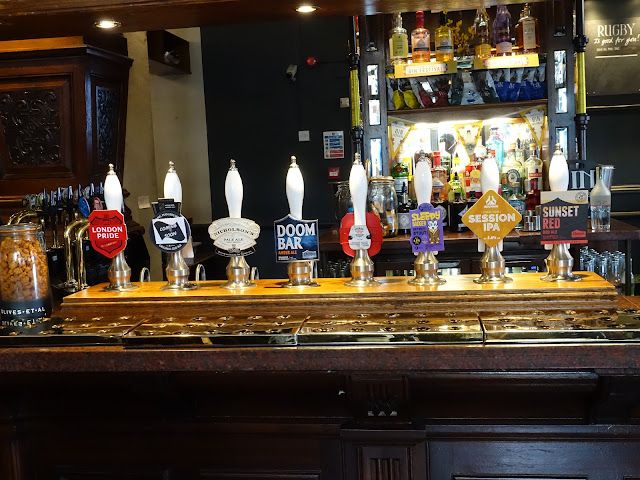 Nothing like taking a break in the day at a pub. But there's more to the story and with a little time to dictate here while we wait in our hotel room for the next activity that he just say that things didn't go as planned for our guides. Our guides had called the night before to confirm the reservations at this pub and when we got there, there was some 40 of us, and the personnel at the pub knew nothing about us coming there. You'll also notice there was no pictures of the food, which was the second worst fish and chips meal I've ever had in London. It wasn't our guide's fault it wasn't our guide's fault in any way, but it makes you wonder in store for us in London. Optimistic Bob. 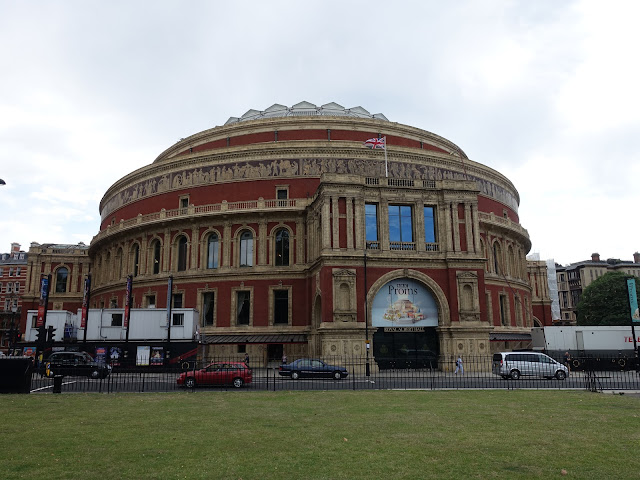 The Royal Albert Hall in London. 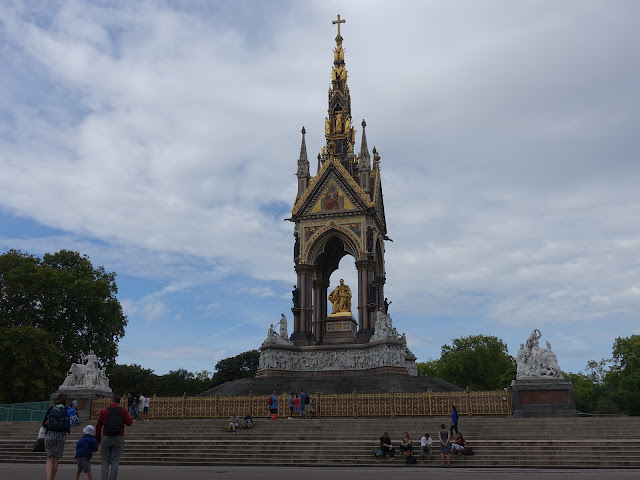 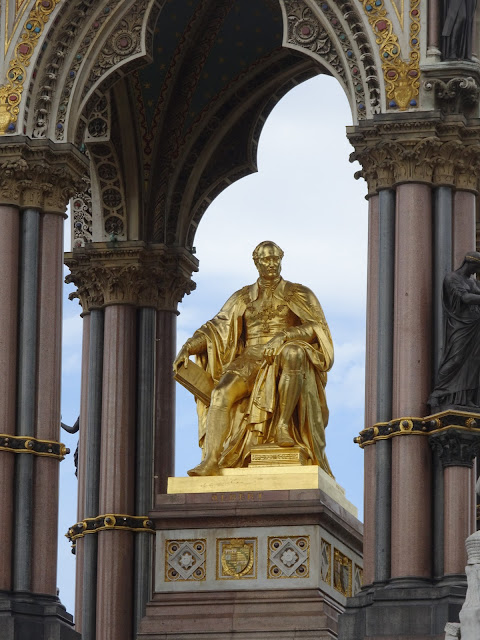 Queen Victoria truly loved her husband, Prince Albert, and when he died she wore black morning close for the rest of her life, which was decades long. This is the memorial to him that she had erected on the grounds where the grand exposition of 1851 which included the Crystal Palace had been held and which had been come into existence because of the passion of Prince Albert for technology and the future. 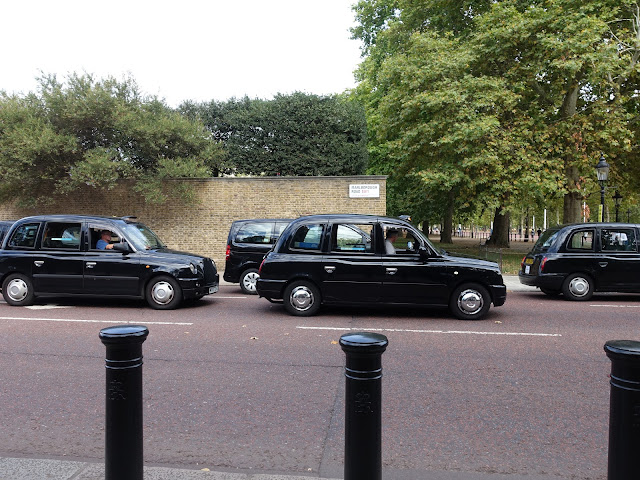 One could almost think of black taxis as London's equivalent to pigeons, you see them everywhere. 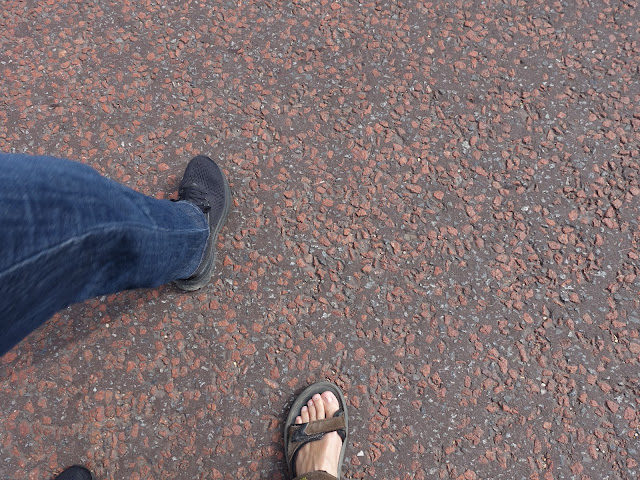 As we were crossing the road that leads to Buckingham palace our guide, Tony, mentioned that it his reddish in color, not the standard asphalt gray of all the other streets. Red rock is used in its servicing and is said to suggest a red carpet. 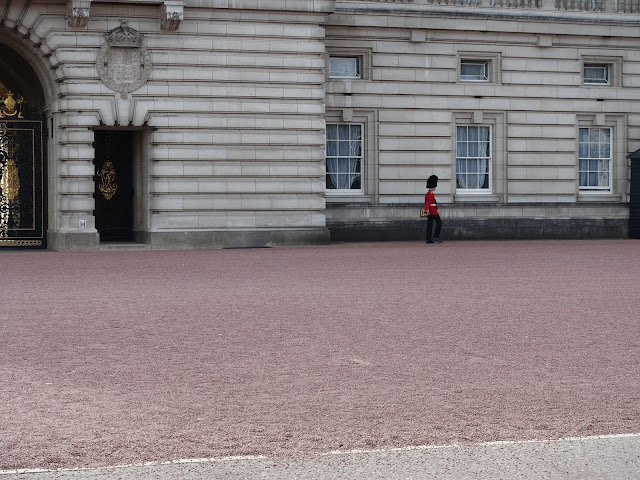 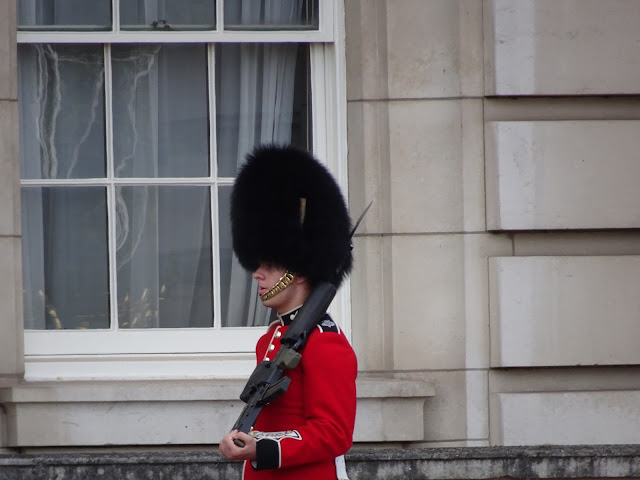 One of the guards in front of Buckingham palace. 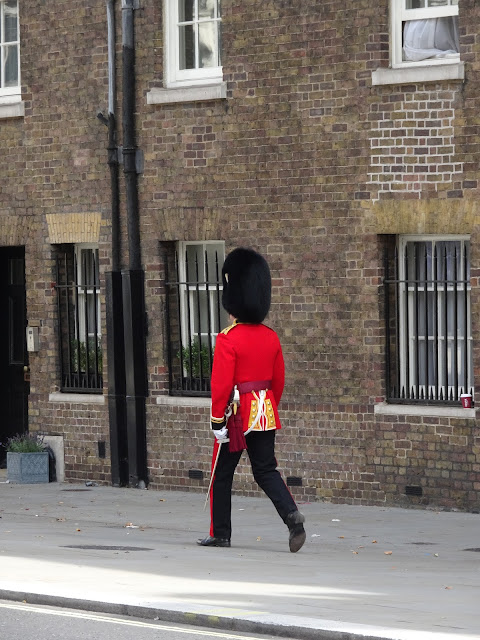 And a little bit later, just walking down one of the streets in town, look what we saw. 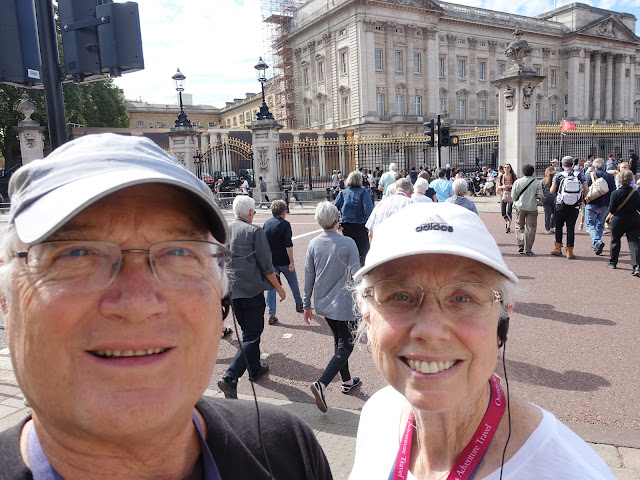 Obligatory Buckingham palace selfie. Having been there a number of times you can no doubt read the excitement in our faces. Bad Bob 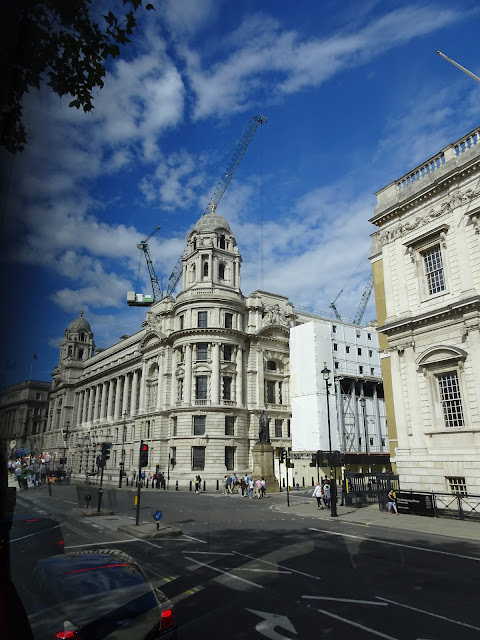 Linda was taking photos as we drove around town in the bus. London is literally a city under construction with building going on everywhere. I don't have a clue what this is, but I know I had better post one of them. Smart Bob 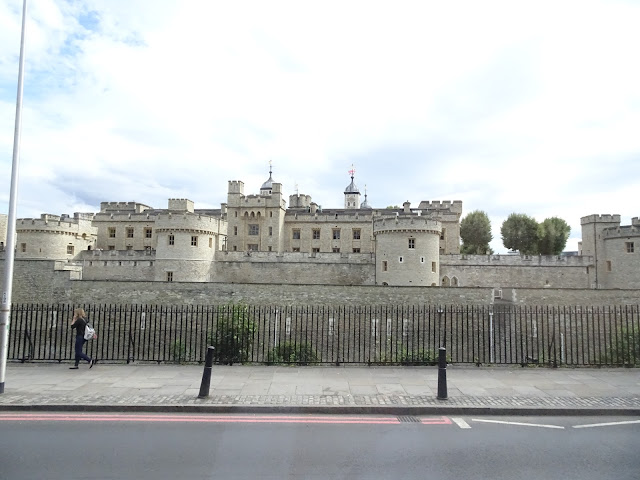 The Tower of London, photo by Linda. Here 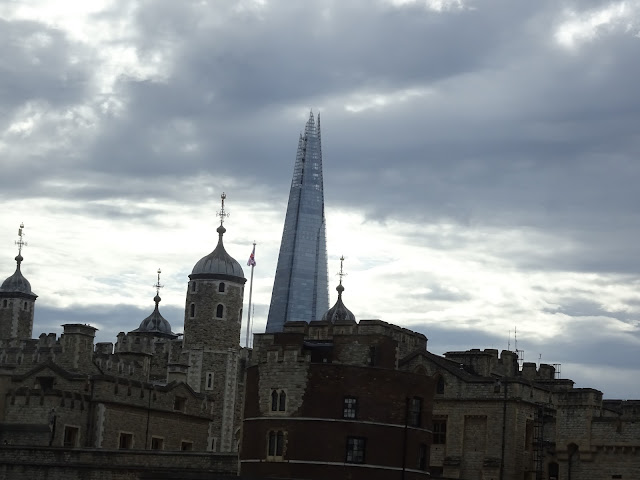 Linda's favorite building in London, The Shard. I'm pretty sure there'll be more pictures before we leave London and probably even more when we come back in another couple weeks. 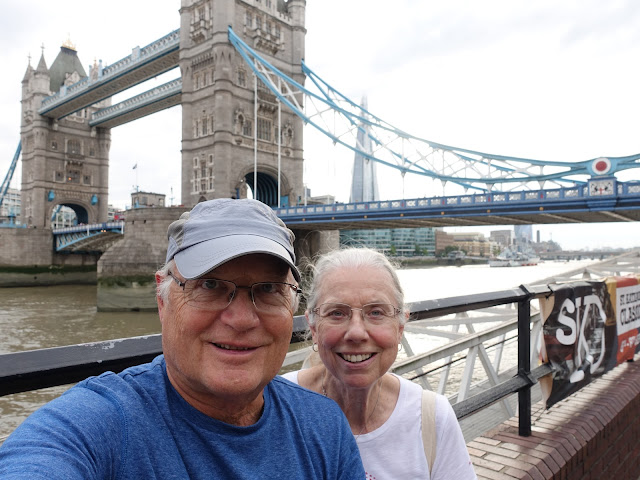 Another selfie we always take and post. You might notice how she maneuvered us to stand so that The Shard was in the background. Devious Linda.