Sorry to be so late posting this, but there are only so many hours in the day. 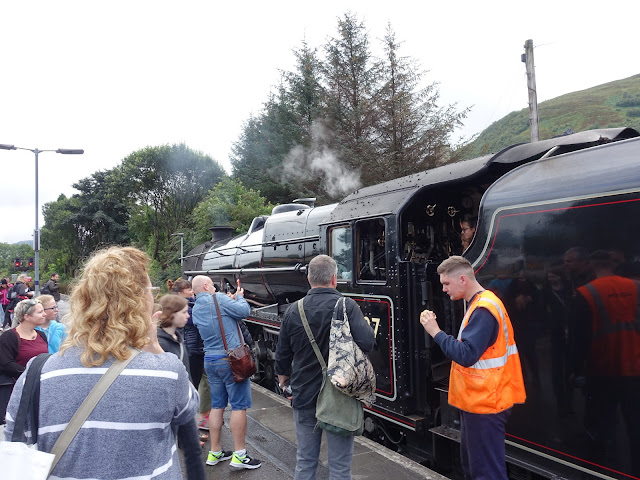 It was indeed a famous train, think Harry Potter, think one of the most beautiful railway journeys in the world. It's known as the Jacobite steam train. As you might guess there were a lot of people crowded around the engine all trying to get the perfect picture. 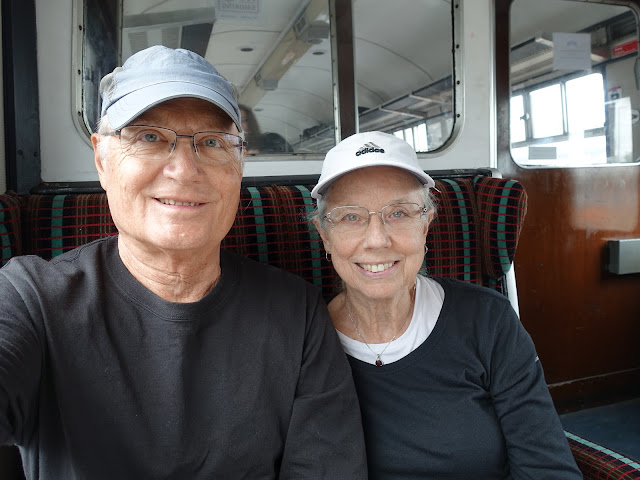 Just to prove we were actually on the train. 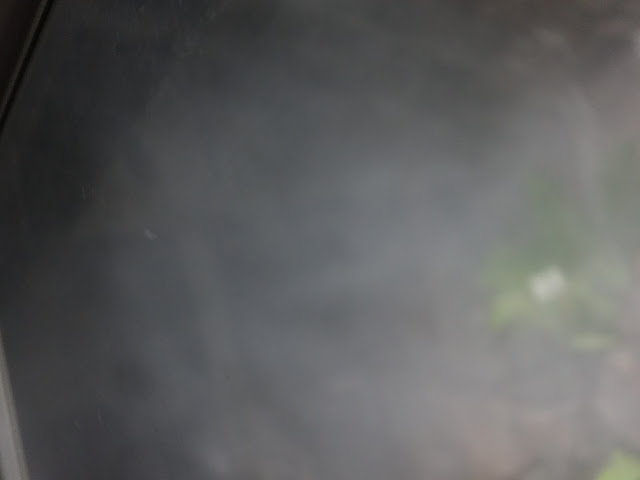 If you've ever wondered what it looks like just as you're entering the tunnel on a coal fired steam train, this is what you see. There are dozens and dozens of sites on the Internet where you can see images of the scenery, but all but none of them show something as interesting as this. Befuddled Bob. 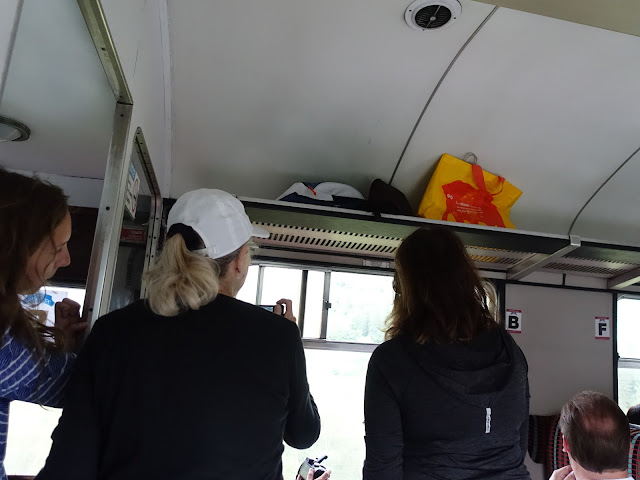 It was always easy to tell when some interesting scenery was coming up. 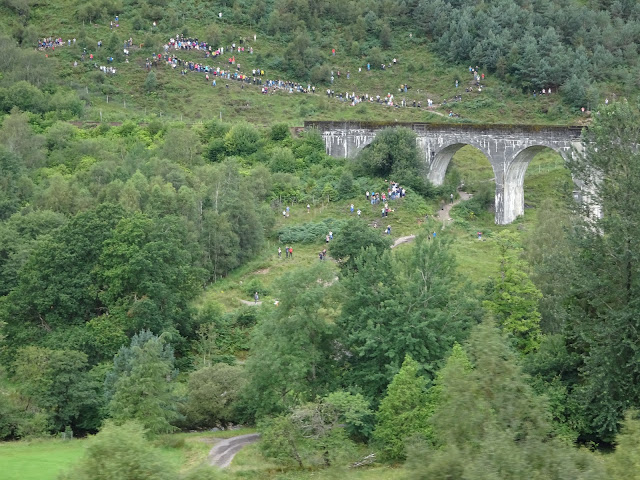 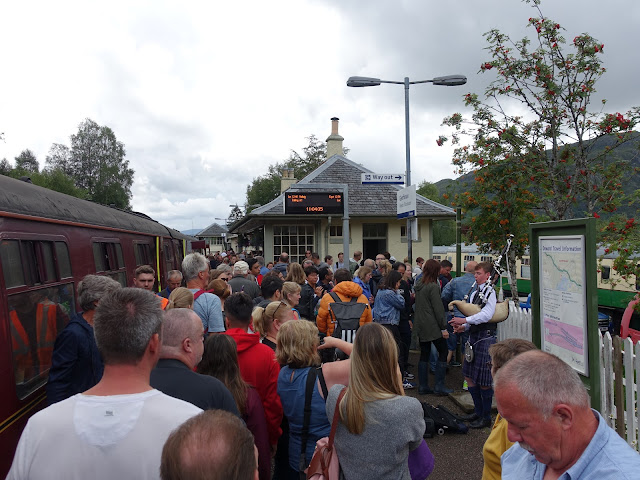 About halfway through the journey the train stopped and we had a 25 minute layover when everybody seem to get off at the same time. Everywhere you go it seems there is someone playing the bagpipes with their case open in front of them for people to toss some money into. Let's just say that most of them could probably use a few lessons. It may be just my hearing problems, but I pick up a lot more screech than tunes. 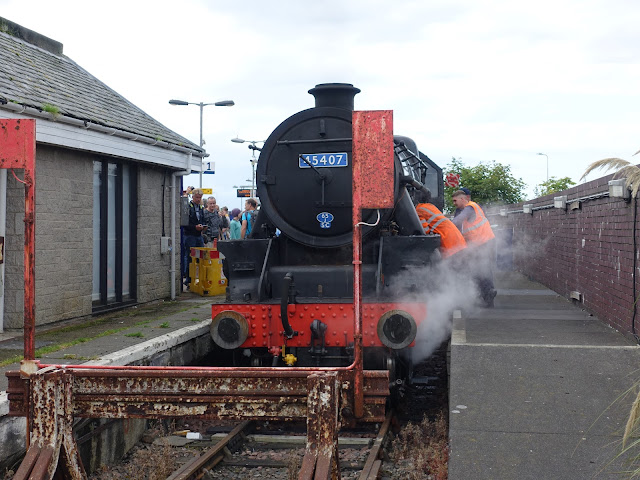 At our destination, a little better photo of the engine. To go back down the hill they back the engine around the cars, then couple up and travel tender first. There were small windows that opened in the cars, and when the engine was really chugging up the grades black cinders would come in the window and get all over the table. Of course neither Linda or I thought to take picture of that. 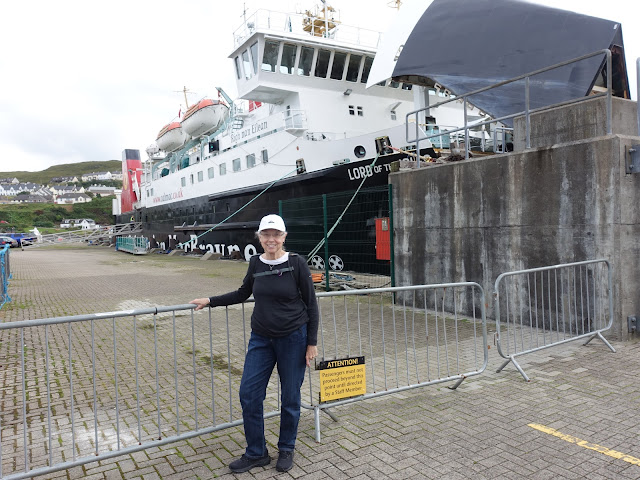 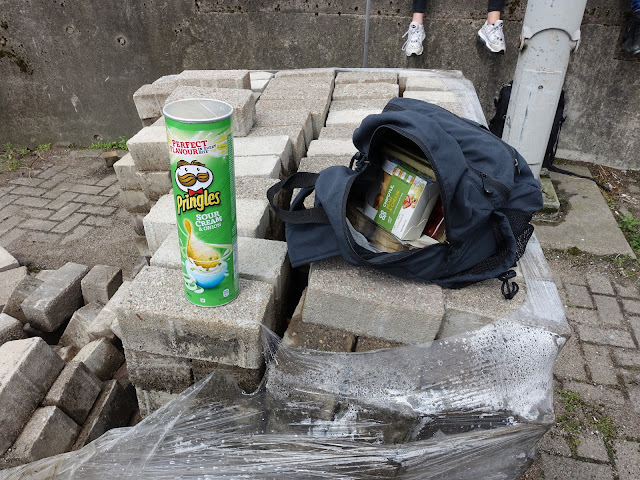 So what do you do when you're waiting on the ferry to take you across to the Isle of Skye? You have a little picnic from what you bought at the local co-op. And yes, if you're thinking that these two people eat a lot of Pringles, you'd be absolutely correct. It's our one vice when we traveled overseas because they're available wherever you go and the extra salt does is good. See, we eat them for our health. Happy, Healthy Bob and Linda. 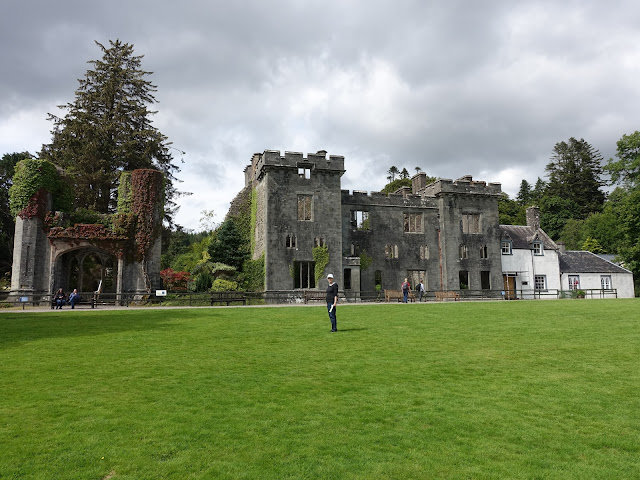 The home Castle of clan Donald. 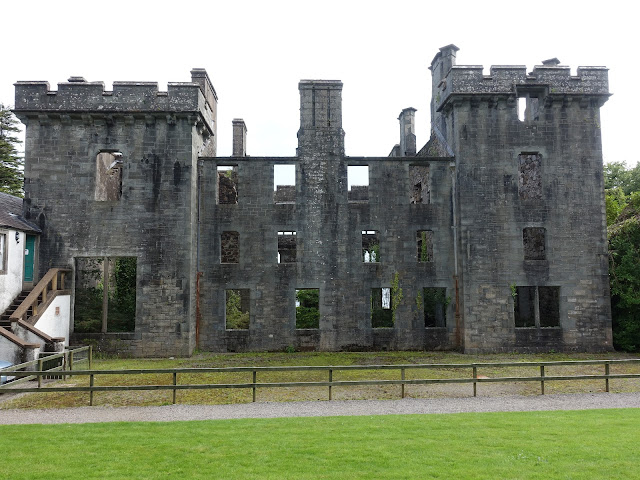 As the back shows, it is now just a ruin. 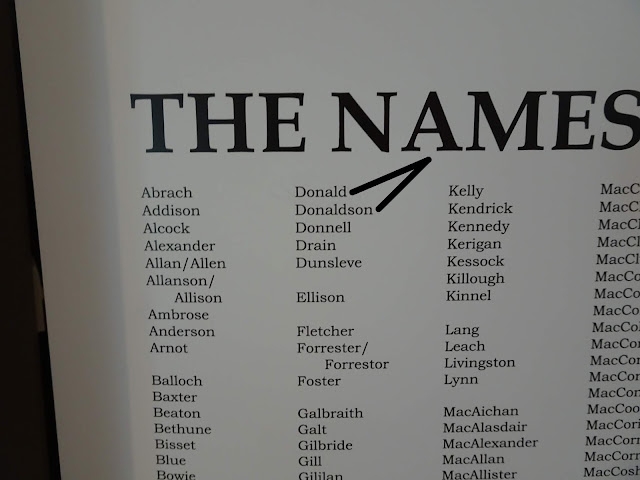 From the surname book of those who belong to clan Donald. 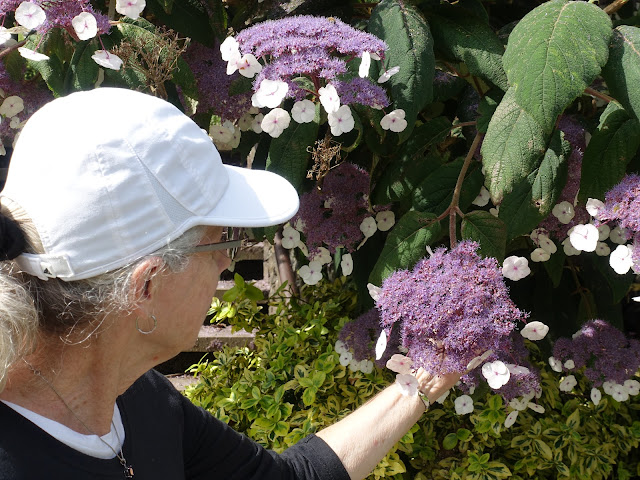 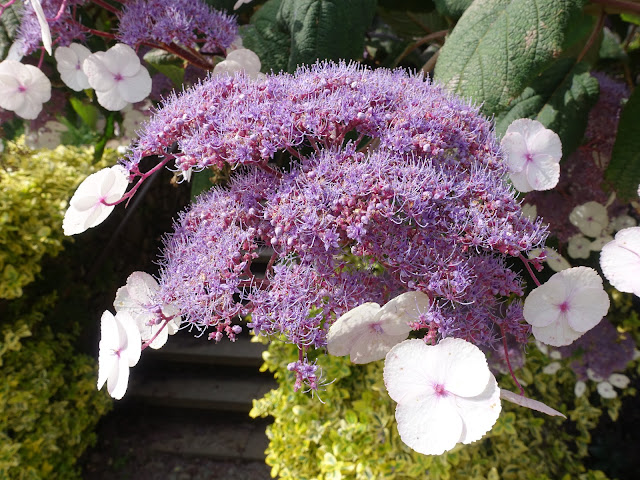 About us pretty as you can get.

Linda showing how to gracefully get off a tree limb. Let's just say that due to my wanting to preserve all of my limbs in their present configuration no photos of her getting onto the limb will be posted. Smart Bob. 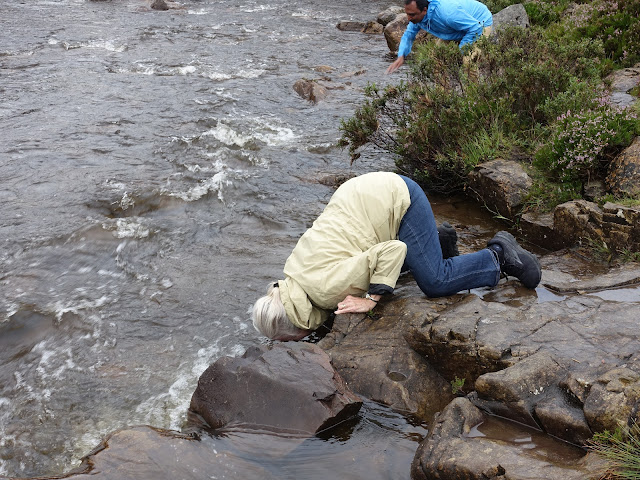 One of the Scottish myths revolves around a beautiful woman who had an unfortunate fall and became ugly. A fairy came to her and told her if she dunked her face in this river for seven seconds she would become beautiful. Linda certainly didn't need to do that to a beautiful, but she thought it would be fun. You can see how that went in the video below.

While we were there we had an attack of the midges. Tiny little triangular nasty lighting creatures for sure. 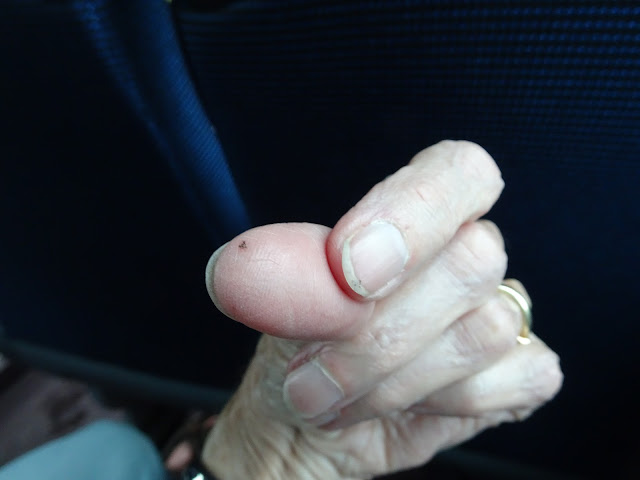 That's one of them on Linda's thumb. 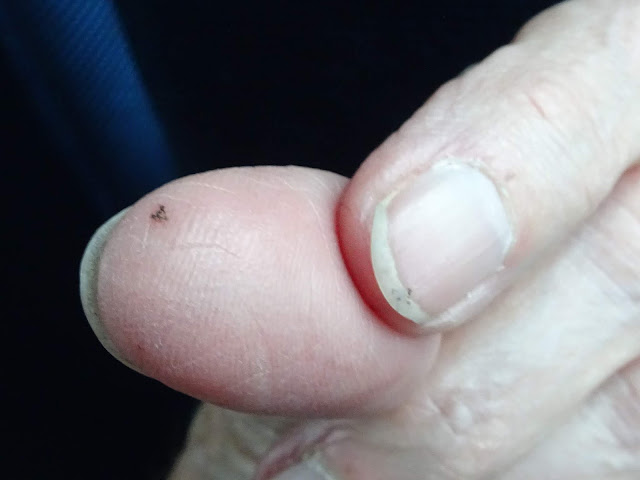 A semi-close-up of a midge. These tiny little buggers are really nasty. It isn't just one or two that attack you, it's dozens and all you want to do is brush them off and get away. And that's exactly what we did. Which is exactly why there are no pictures of either Linda or my face covered in midges. If you've ever experienced an attack of the midges you know what I'm talking about. If you haven't, I hope you never do. 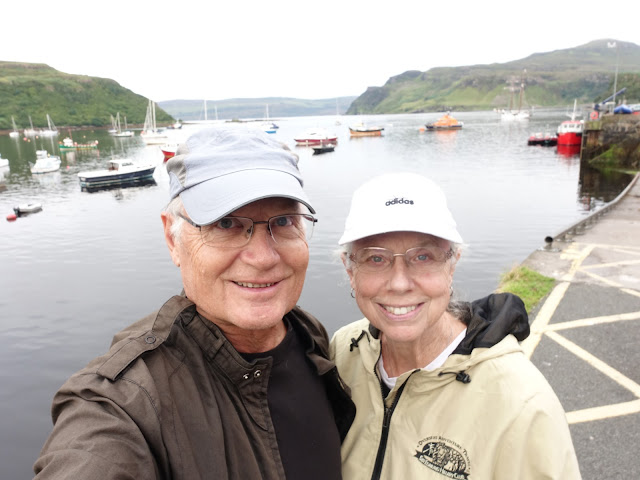 Experienced photographers will immediately see that I'm still exploring all the ways to use the aperture priority setting On my camera. Of course I could say that what really counts, Linda, is definitely in focus in this photo. Quick Thinking Bob. 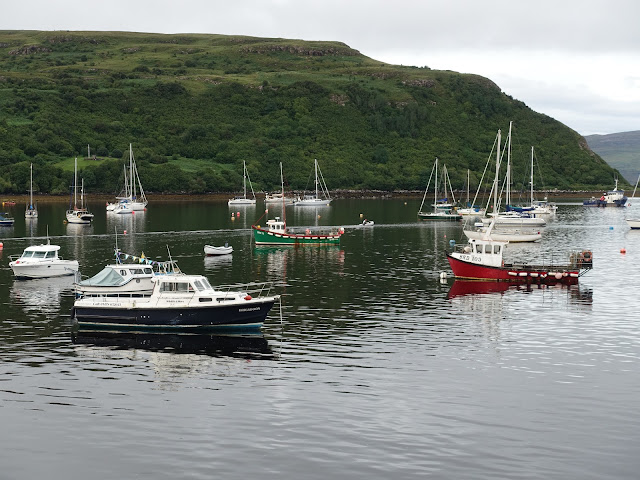 This just goes to prove that even a novice can occasionally stumble onto the correct camera setting. In case you are wondering, this is the harbor at Portree. 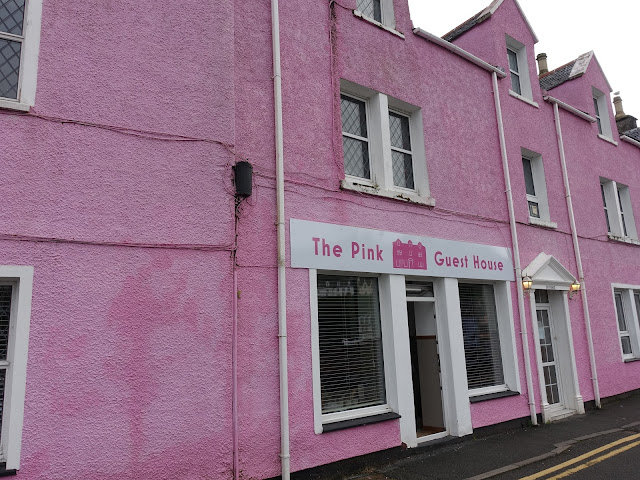 Myths, fables and tall tales are a part of Scotland. The story of how some of the buildings along Portree harbor became painted in different colors rather than the customary white is one of them. As told by our guide, err tall tale spinner,Gillian, there was a whale that died in Portree harbor. Not knowing what to do with it the locals asked the Navy to dispose of it. The Navy decided to blow it up with explosives. The townspeople decided to have a great celebration out of it and line the harbor. When the young boy who won the lottery to press the button to set off the explosives did just that the whale exploded. It really, really, really, really, exploded. Showering all the spectators and the buildings in the harbor with whale gore. All describing could not remove it from the buildings so a number of them ended up being painted in different colors. While Gillian never offered to sell anyone on the tour a bridge, I'm not sure but what there weren't some people that would've taken her up on it. She is one of the very best tour guides we have ever had. It should also be noted her nickname is Gill, pronounced as Jill. 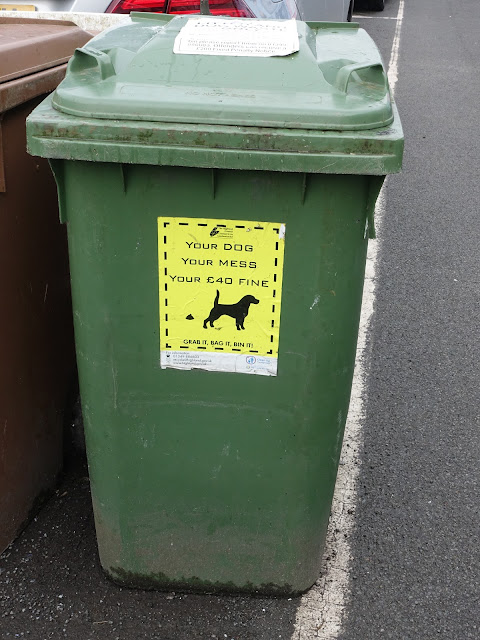 They take dog crap seriously in Scotland. Wish we could say the same for Retama. 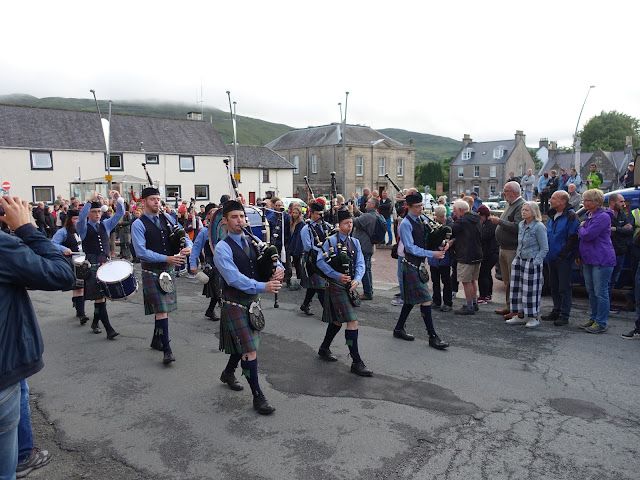 Tomorrow is the day of the Highland Games in Portree. Tonight the Portree Pipe and Drum Band marched through the city streets and gave a brief concert. 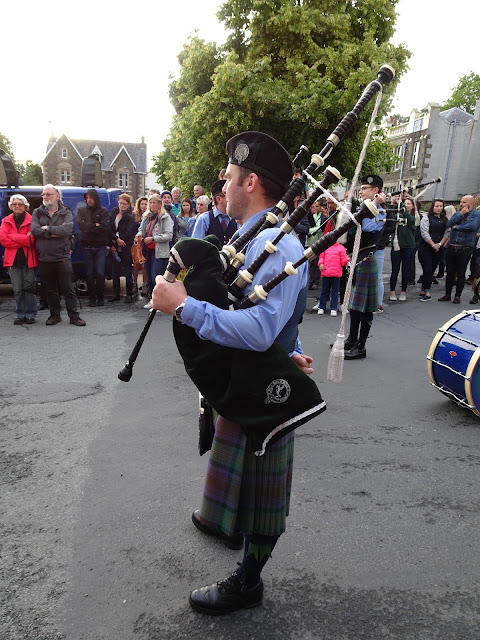 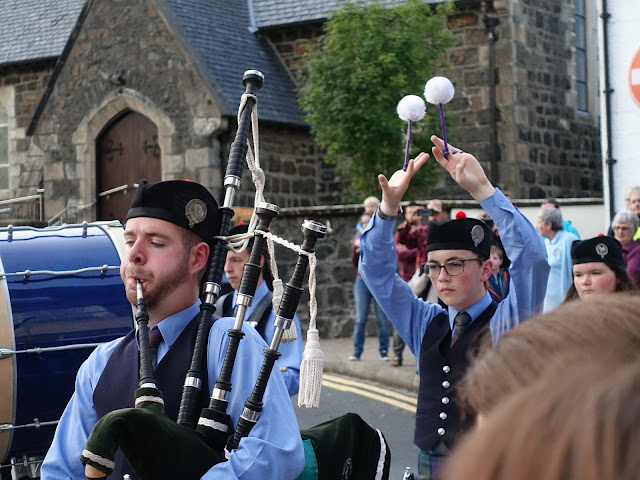 The piping was great and this young man put on quite a show with his drumming. 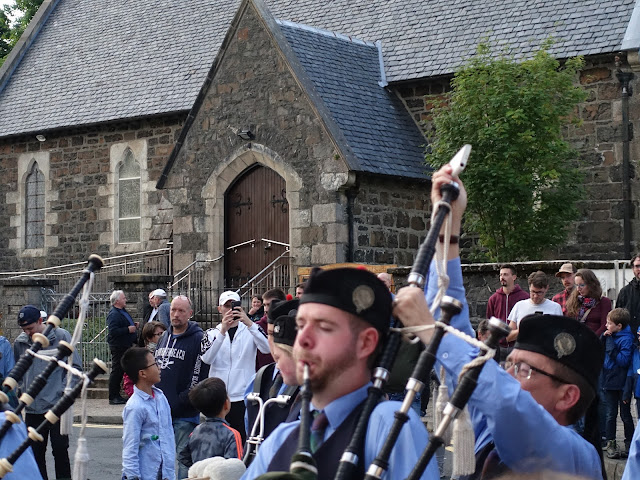 How they tuned the bagpipes.

Normally with my hearing I find the screeching of the bagpipes strangely irritating. However, the music they were playing was very good and both Linda and I really enjoyed it.