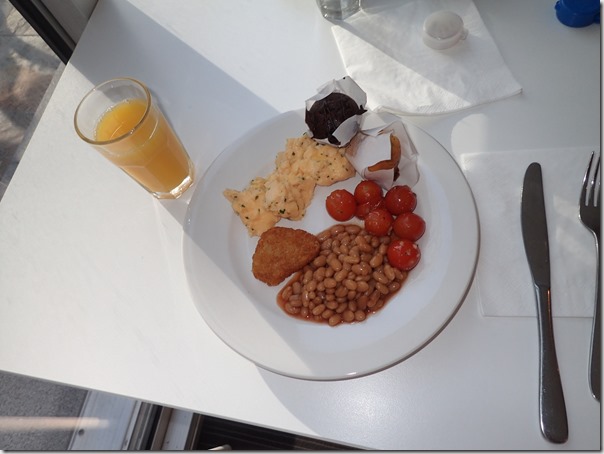 I can’t help it, for years I have followed the full time RV mantra that any blog post must have food photos in it, the more the better. Taking pity on the readers of our Australian adventure I have endeavored to limit the number of food photos to the bare minimum required by universal blogger law. What can I say, I’ve a lot of English ancestors and their love of baked beans for breakfast has obviously found fruition in this descendent of theirs. Tootin’ Bob. 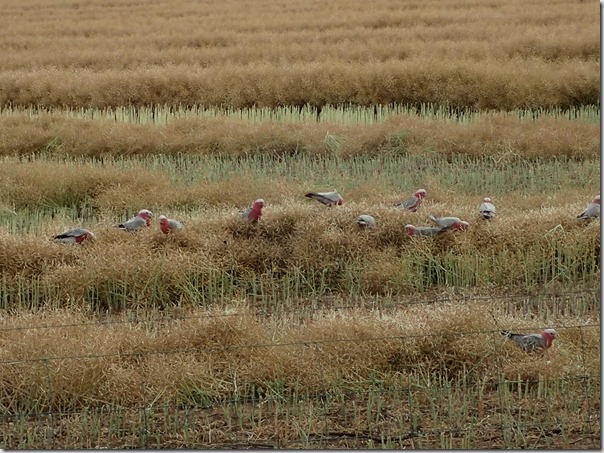 We were off on a wildlife adventure today. We stopped to view this group of red headed parrots feeding alongside the road.

What happens when someone pays no attention to what the guide says and decides to move in closer. By the end of the day a number of the people in our group had concluded that brains are not a requirement to go on an OAT tour. 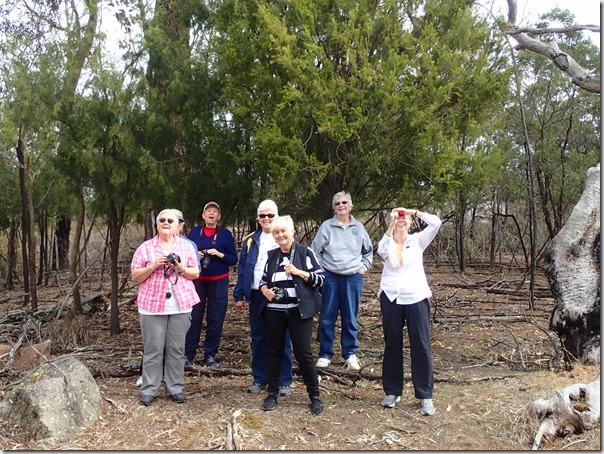 So just exactly what are these attractive ladies looking at? And no, it wasn’t the handsome and dashing young photographer that took this photo. 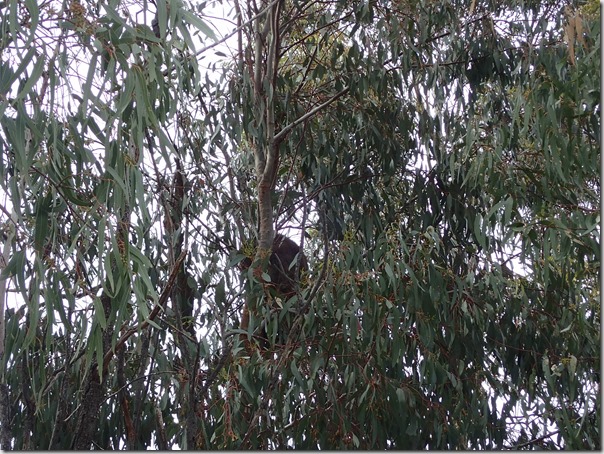 What’s that in the center of the photo? Why it’s a koala bear in the wild. 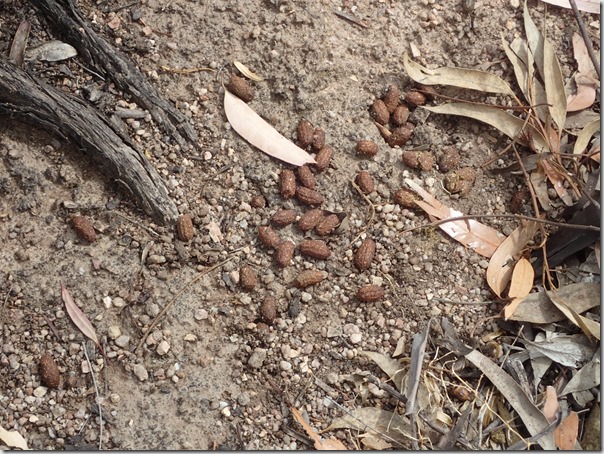 When you see this on the ground in an area where eucalypts  grow, look up. Actually it is a good idea to move to the side first before looking up so as not to get a face full of koala poo, should it still be in the tree above. 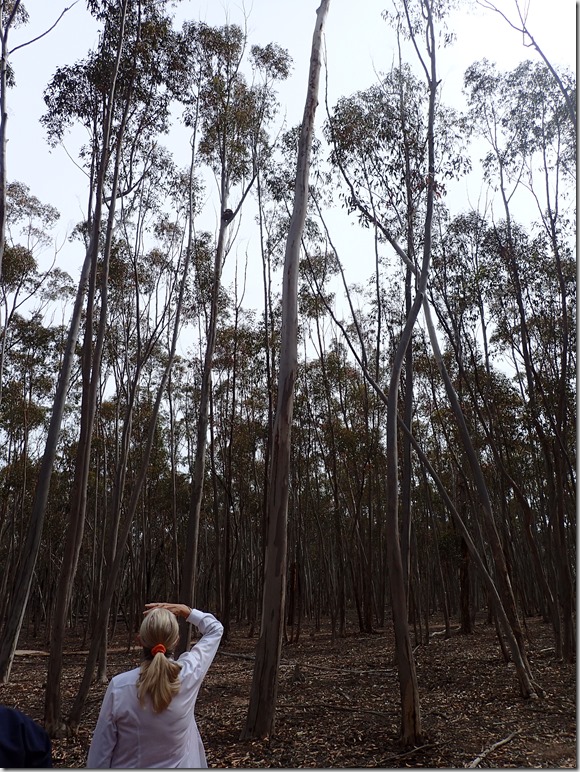 No poo will fall on this girl. The koala is high up in the tree directly in front of her. 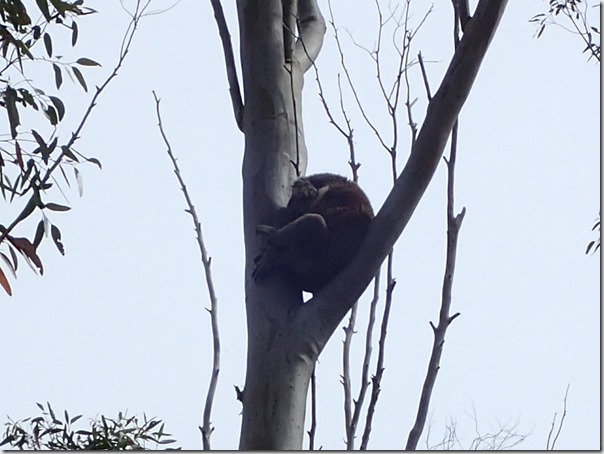 It’s a male, quite high up watching over his lady friends, though it appears he may be taking a nap at the moment. 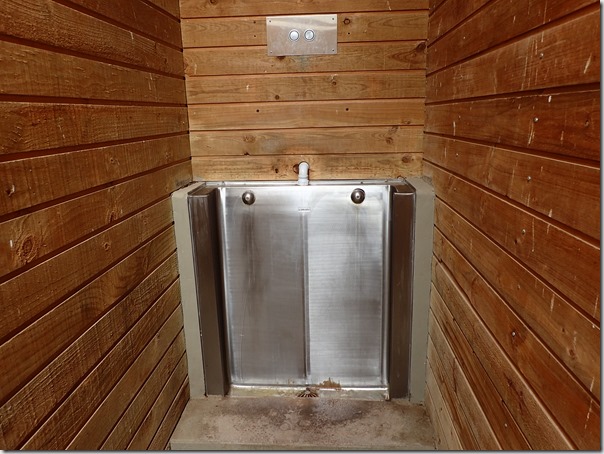 There is no detail too small to be left uncovered by the Because We Can Australian blog. 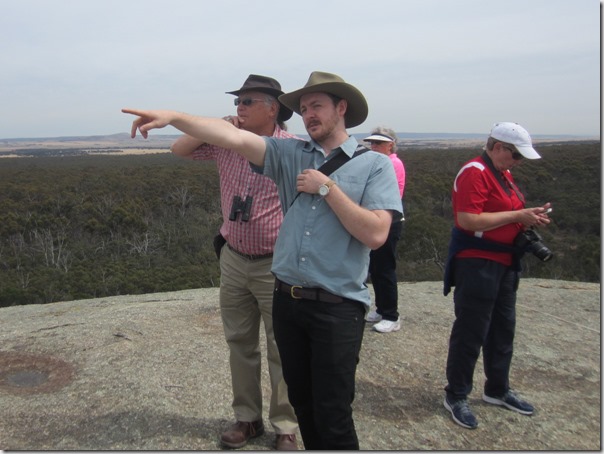 On top of Big Rock which is a big rock. The way things are named in Oz leaves no doubt as to exactly what they are. 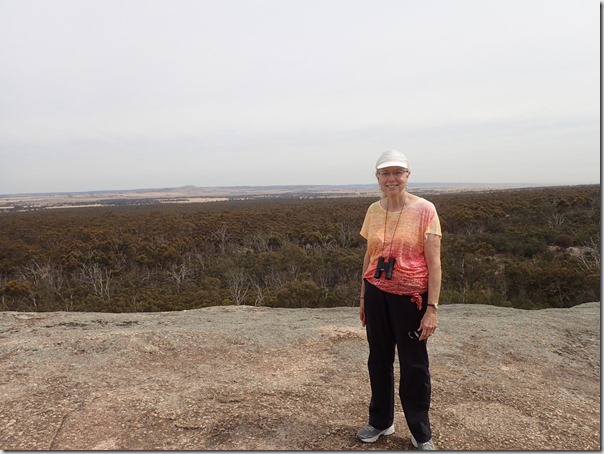 When there’s a million dollar view there should be a million dollar woman in it and there is. I wonder how many more millions I’m going to have to spend on her in the years ahead. Broke Bob.

In the park there was an area where a certain noxious weed was found and as part of our trip, we spent some time pulling those weeds. Note to long time readers: This does not fall into the butt shot category and the person in the center with the small you know what can not positively be identified as the writer’s wife. In Big Trouble Bob.

Notice how the professional in this photo deftly plucks the weeds from the ground while placing his best side toward the camera. In Even Bigger Trouble Bob. 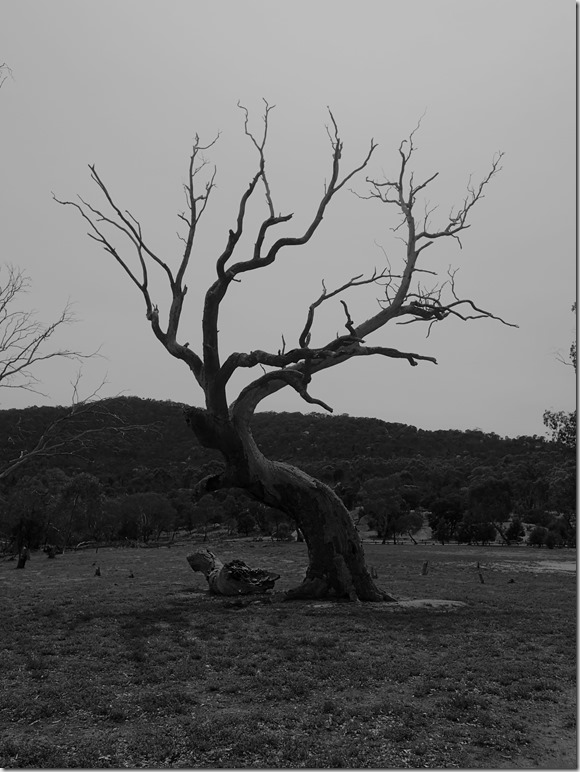 I just thought this tree would look better in black and white. Obviously Ansel Adams has nothing to worry about. 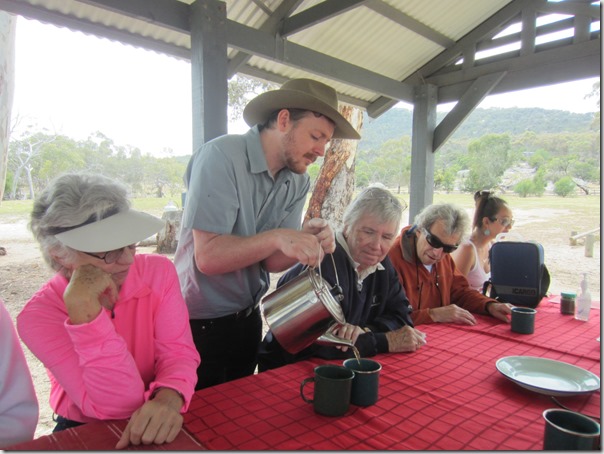 We had a bush lunch complete with Billy Tea.


After the loose tea and eucalyptus leaves steep for a brief time, the Billy is whirled to settle the loose tea. And yes, the tea was awesome tasting according to the family tea maven. 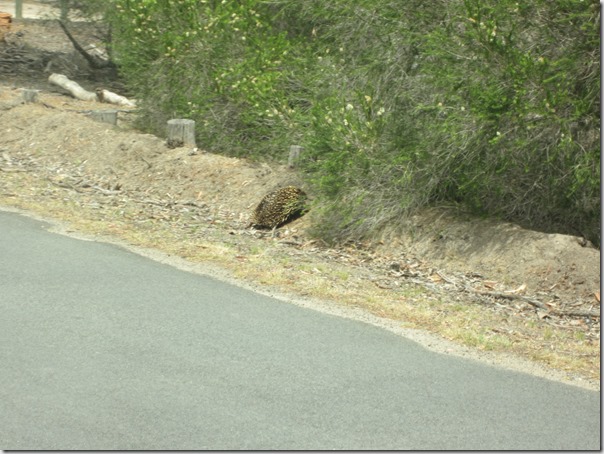 An even bigger treat after lunch, an echidna crossed the road in front of us. 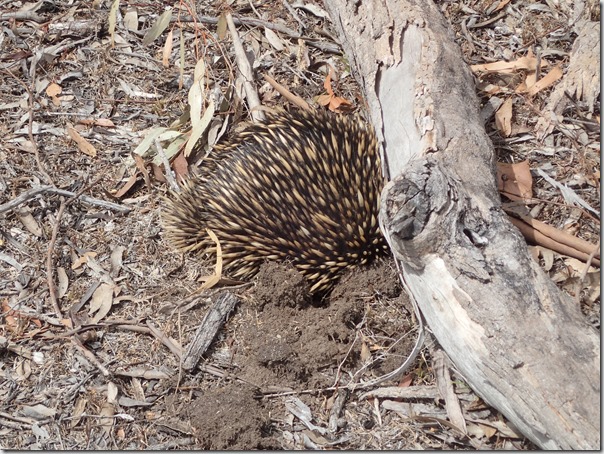 Because it couldn’t get away from us, it partially dug itself into the ground, leaving only its spikey back exposed. 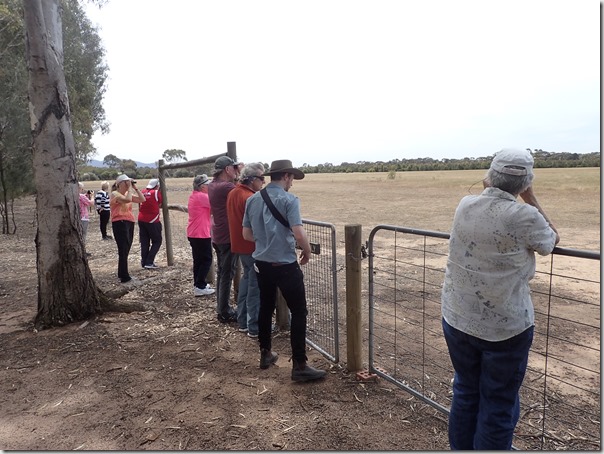 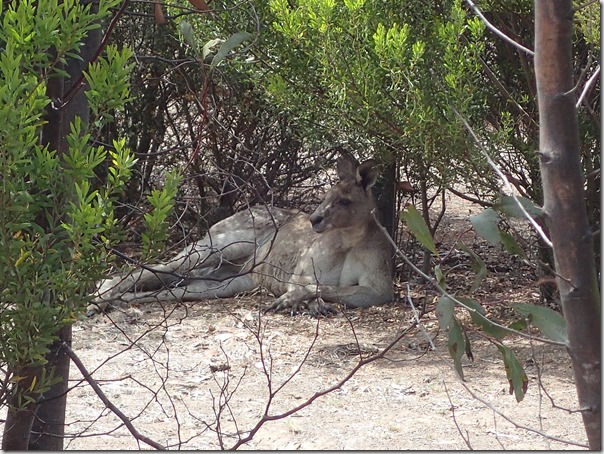 Nothing like lounging during the heat of the day in the shade of a tree. 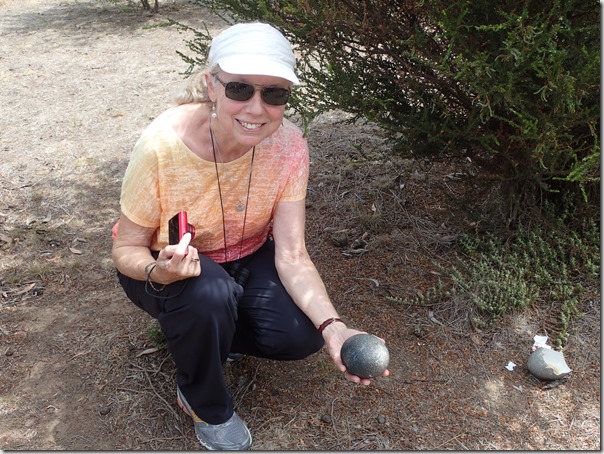 Emu egg. No would be Emu’s were harmed during the filming of this blog, the egg was empty. 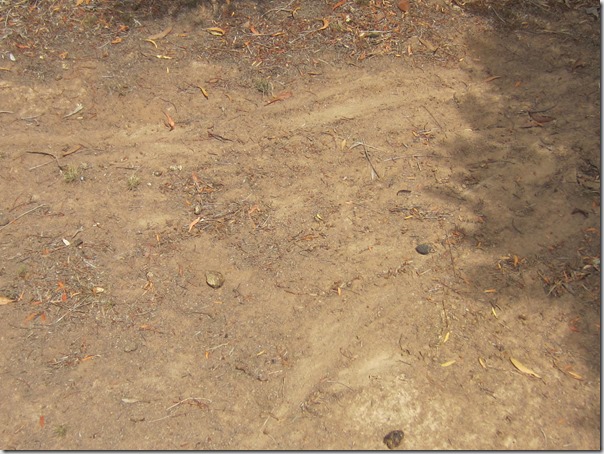 A Kangaroo track. As our guide explained, look for two short marks on the side where the feet were placed and and a long track on the center where the tail dragged. 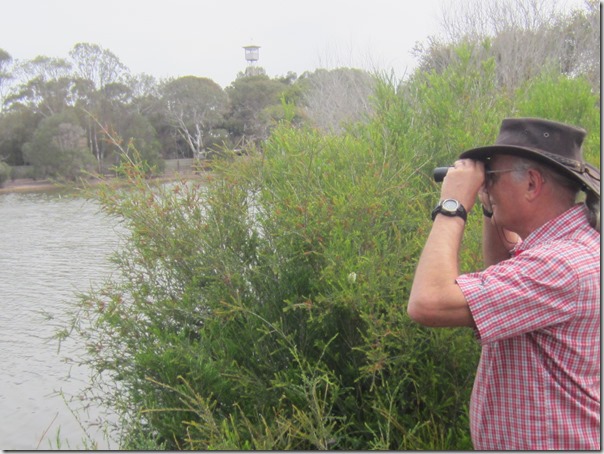 Bob by a Billabong. 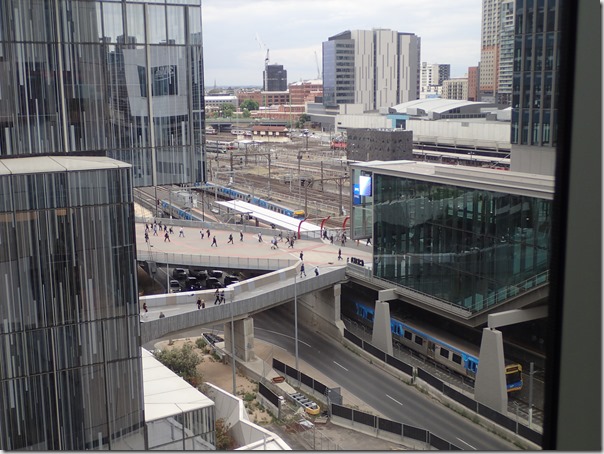 And back in Melbourne it is quitting time and the ants make there way to and fro ending another day of labor. Remember: Life is not a dress rehearsal, don’t be afraid to Love, Laugh and Retire Early.
Posted by Bob and Linda at 2:23 PM

Email ThisBlogThis!Share to TwitterShare to FacebookShare to Pinterest
Labels: Melbourne