To set the scene for today, Rudyard Kipling himself called Milford Sound situated in the heart of Fiordland National Park,  the “Eighth Wonder of the World”. I wouldn’t go that far, but the scenery today was certainly interesting. 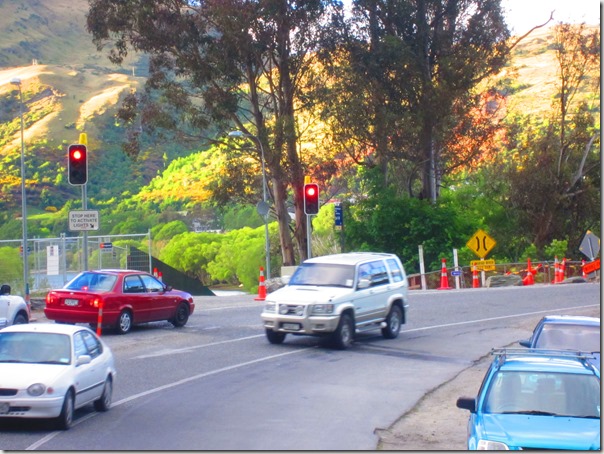 This is something very unique in the entire Queenstown District. It is the only traffic light in the 3,300 square mile area. All the intersections, whether in town or in the countryside are controlled by either roundabouts or yield signs. And not only that, they also drive on the wrong side of the road. 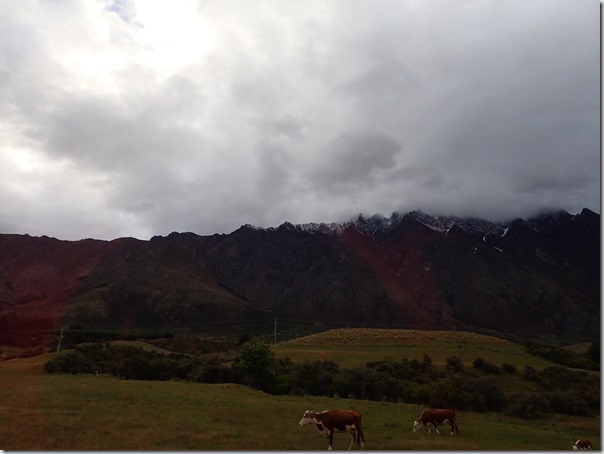 The scenery was awesome during the four hour drive to the sound. 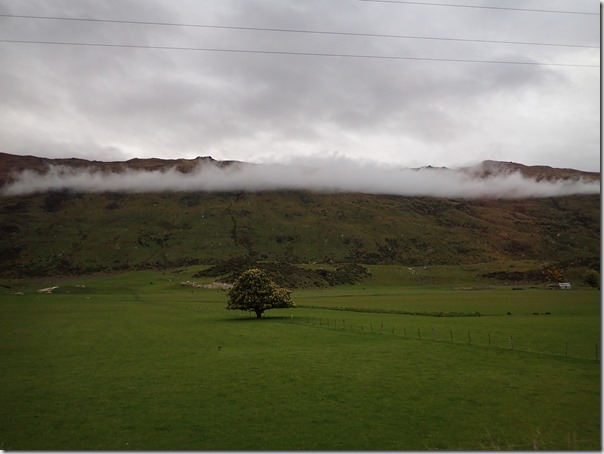 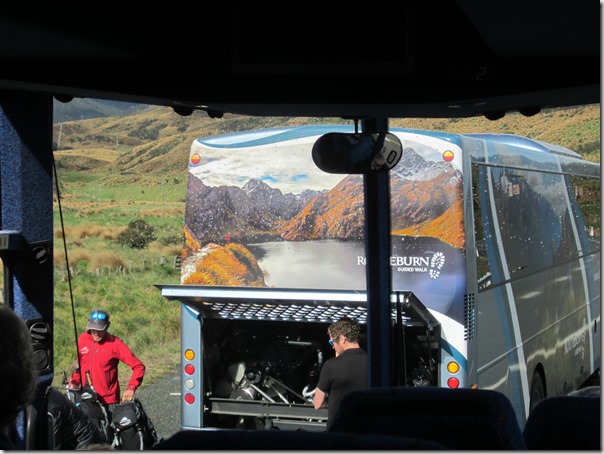 Having been towed four times in our coach, we could relate to bus that was broken down alongside the road. 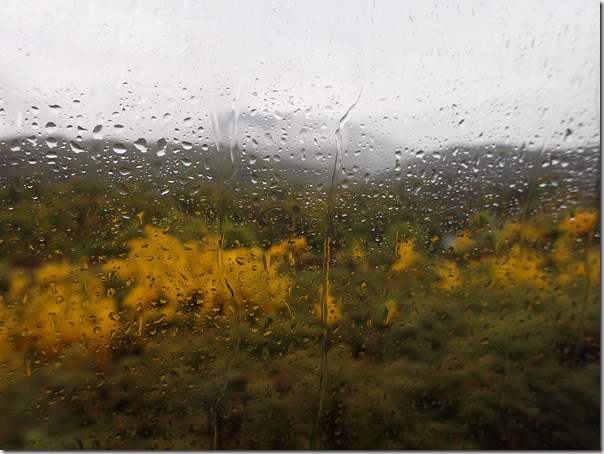 I would be remiss if I didn’t mention that much of the day was spent in weather like this. But with all the rain there was a benefit which you will see later. 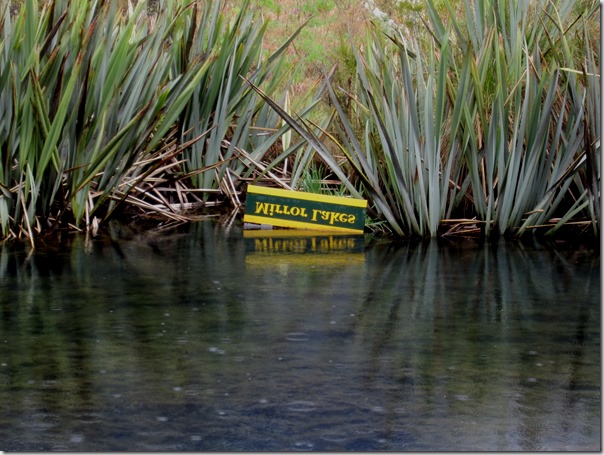 You can probably guess the name of this lake. 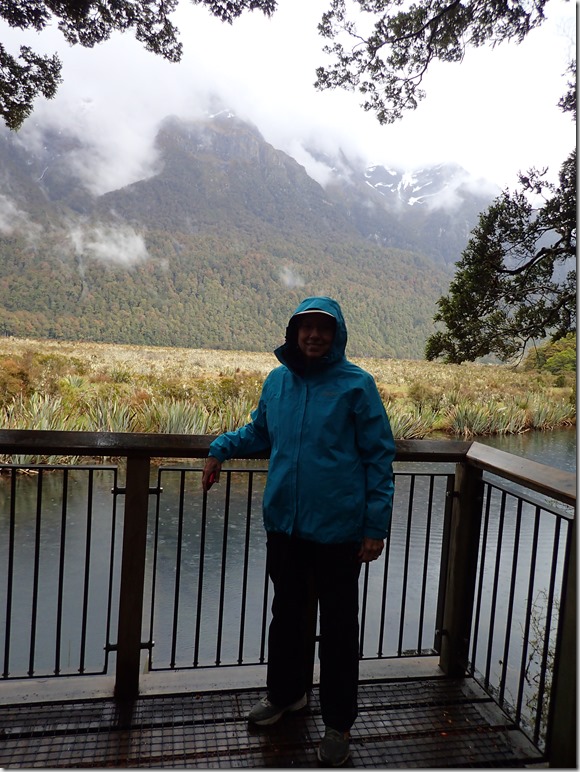 Did I mention it rained a lot of the time during day’s outing. 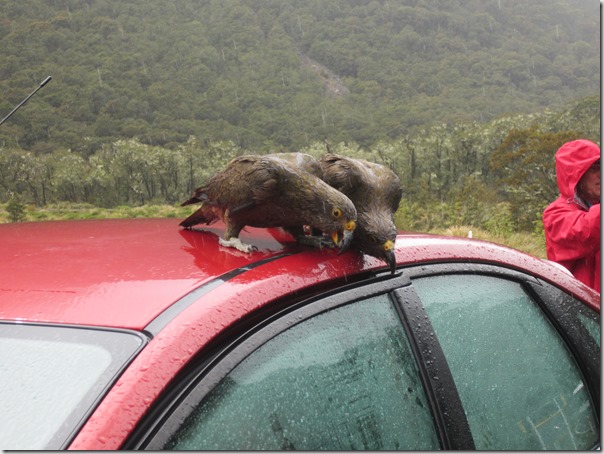 These Keas, alpine parrots, actually eat the rubber on the roofs of vehicles. Even better, as this car left the parking lot and started driving down the road the two parrots continued to cling to the roof and madly bite the rubber door trim. 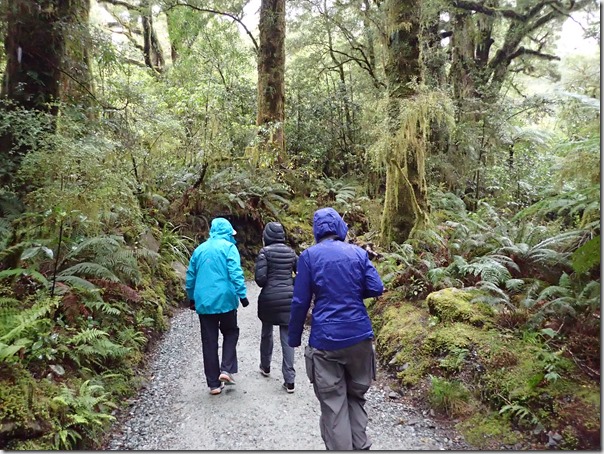 Did I mention that it rained much of the day? For some reason, She Who Tells Me what to Do, told me to take a photo of this clump of moss which was on top of a stump. That also meant, without having been told, that it must be included in today’s post. Good Bob. 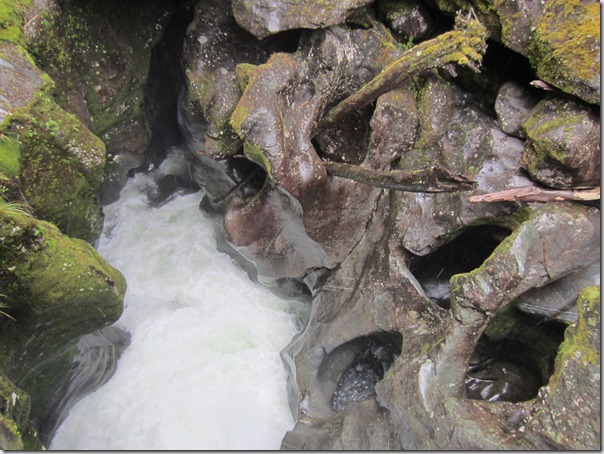 Lots of frothy white water to be seen in the streams. 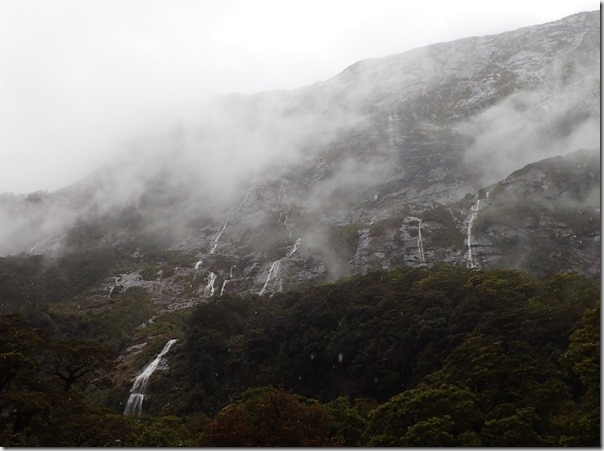 What the rain hath wrought. Hundreds and hundreds of waterfalls all along the mountains. Normally this is where I would do a take off on the Charge of the Brigade, only about waterfalls. Sorry to disappoint any long time readers but it is that old, either do or write conundrum again rearing its head. 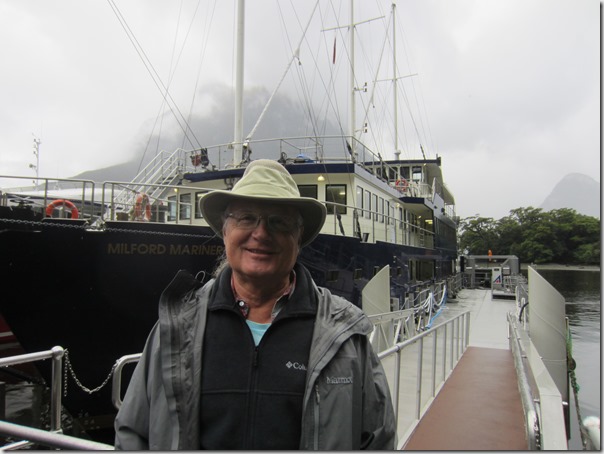 Waiting to board the Milford Mariner for a trip on the fiord. As would be the case, while standing there waiting it wasn’t raining, but the minute the boat pulled away from the dock, down it came again. A word of explanation may be necessary. This is one of the rainiest places on earth with rain falling two out of every three days, amounting to 329 inches a year. The one day record was 39 inches. As was pointed out, the waterfalls are only there when it is raining, so rain is good. Obviously, this was a very good day. 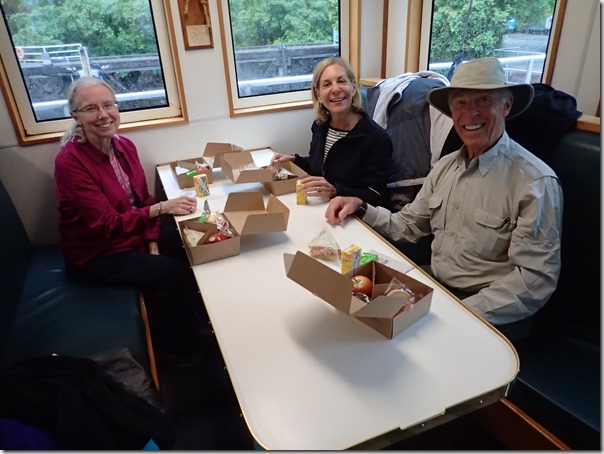 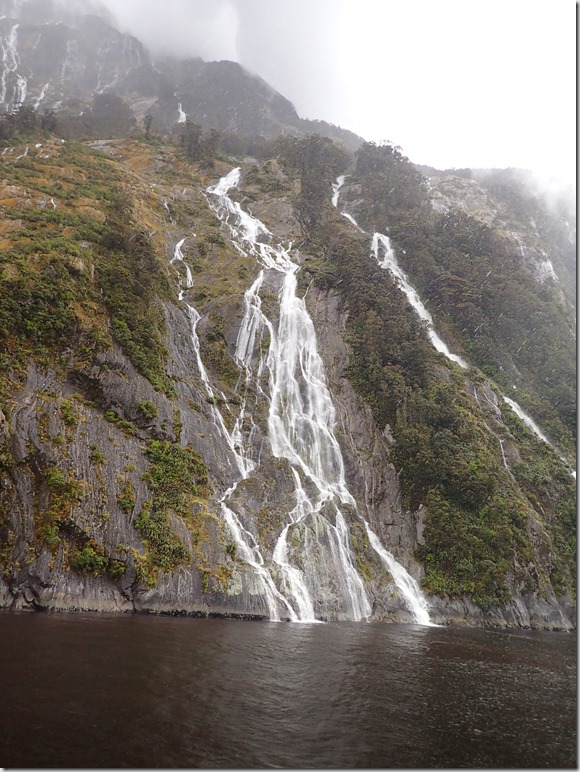 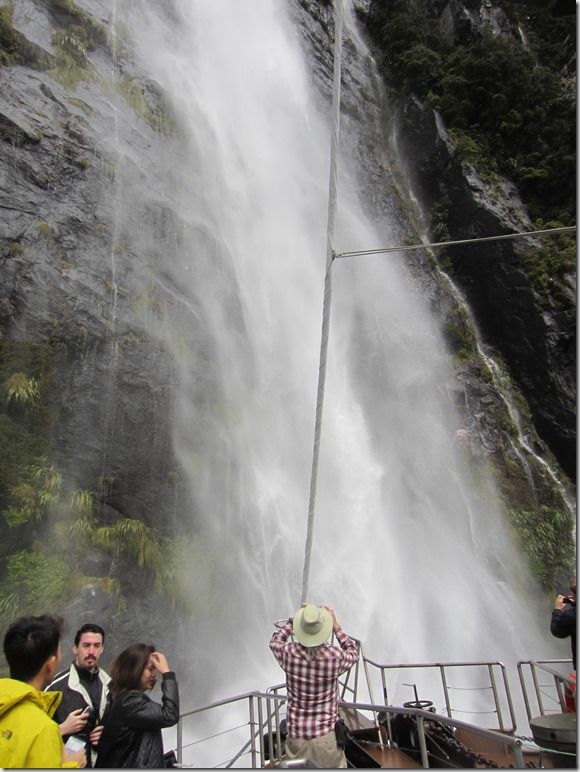 Getting a close up photo of the waterfall. After this one I retired from close up shots. Smart Bob. The water comes down and the hair goes up. 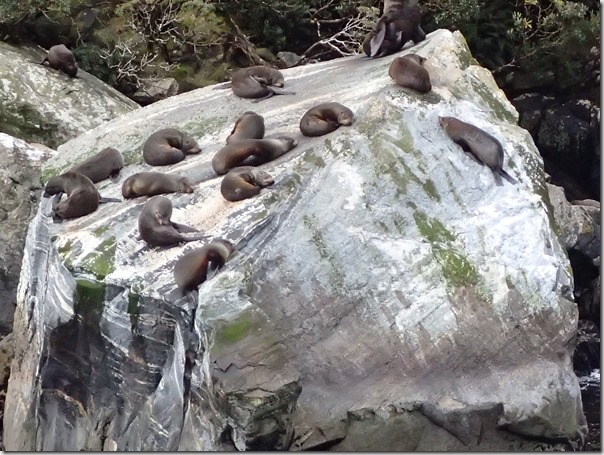 Fur seals. Not sure what the one on the right side was doing, but something tells that just like the previous photo, it was either up or down. 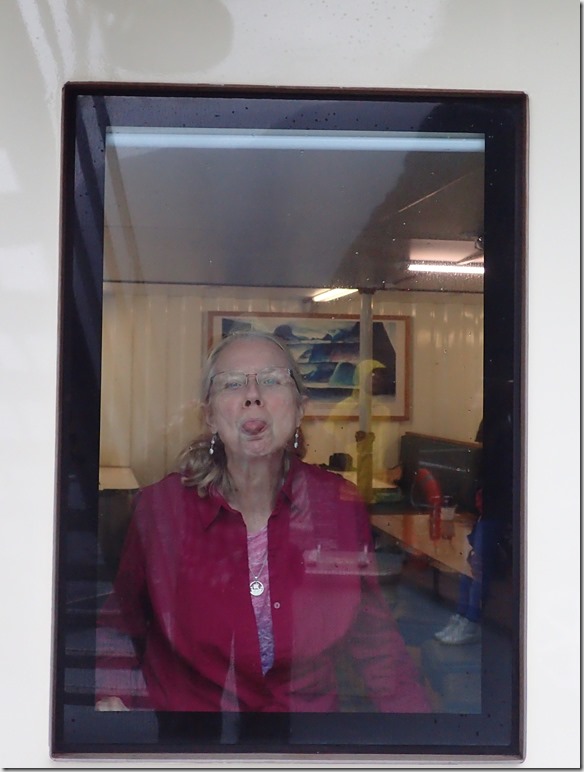 While was outside taking photos of the natural sights, there were some unnatural sights to be seen inside the cabin. (BAD BOB) 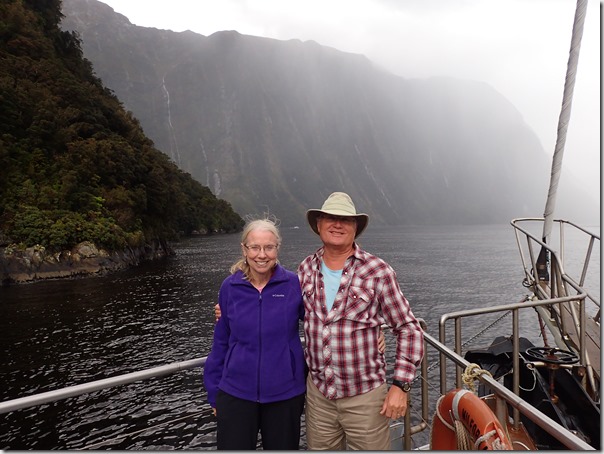 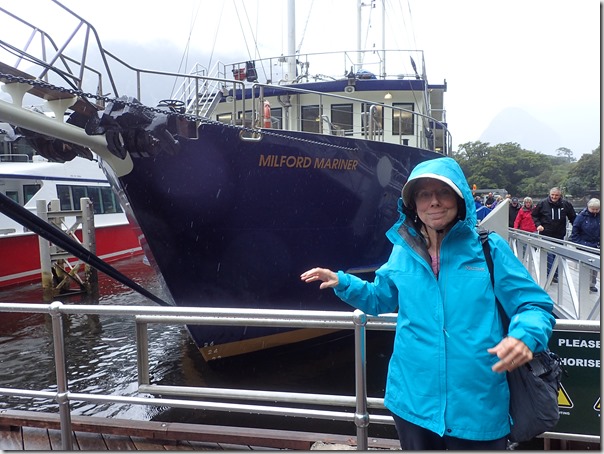 Have I mentioned that it rained a lot today? 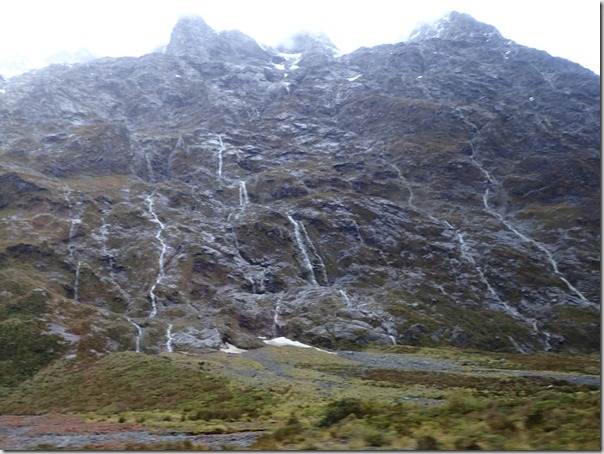 The hills were alive with the sight of waterfalls. Wonder why Linda liked the bottom sign so much? Overworked Bob. 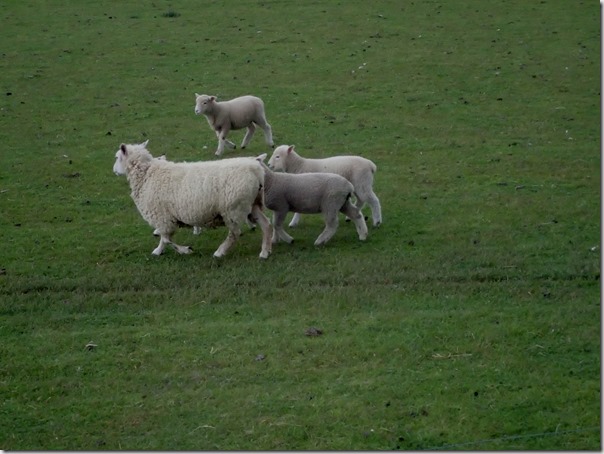 We both loved seeing all the lambs in the fields. 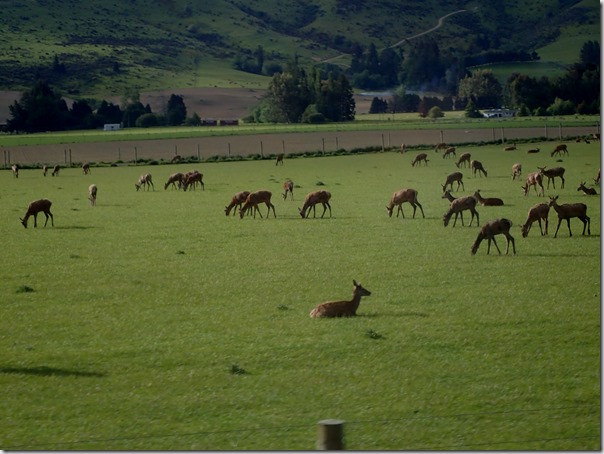 Farm raised venison is found in the restaurants and stores of New Zealand. 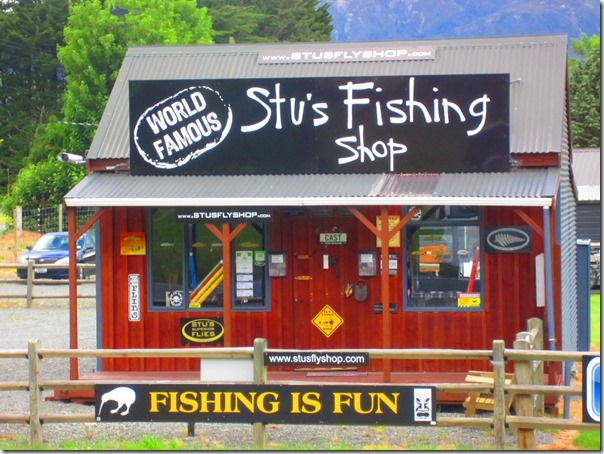 Stu’s actually is world famous in the world of fly fishermen. and that is the entire shop. 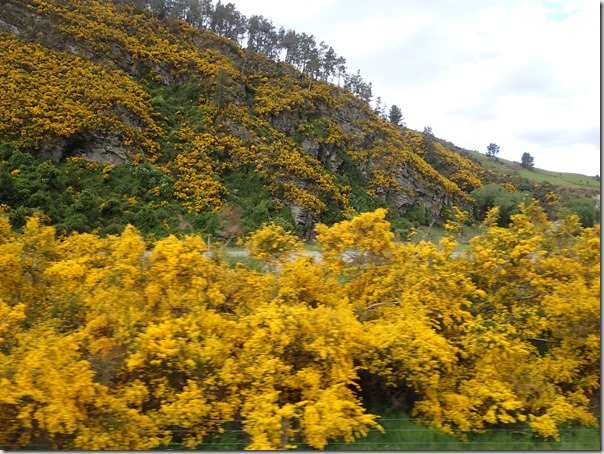 The roadside was alive with the color of Scotch Broom. 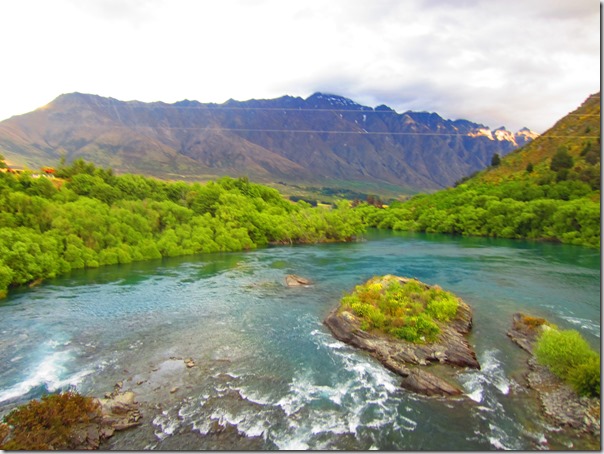 Linda discovered her camera had a vivid setting. The perfect end to the day, a strip of sunlight splashed across the distant mountains.

Email ThisBlogThis!Share to TwitterShare to FacebookShare to Pinterest
Labels: Queenstown