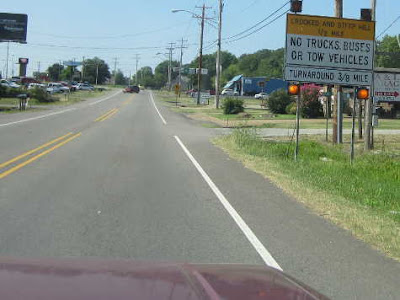 We see many things in our travels that we notice but think little about. I speak not only just of ourselves, but of all fulltimers who travel the roads of our country. Leaving the RV park and heading to Fort Smith we passed not just this sign, but a total of three signs that made it increasing clear that anything but single vehicles needed to turn around and not proceeded on this road.

Last evening when I was walking around downtown Van Buren I noticed a memorial in a vacant area along Main Street. It listed nine people who had lost their lives on the evening of June 21, 1985 when a semi truck driven by a young husband and wife team lost its brakes on long steep hill we had just come down and slammed into a station wagon with a brother and sister and their families in it. When everything was over, three buildings had been destroyed in the ensuing fire and all nine occupants of the two vehicles were dead. An article on what happened is here. We can never take life for granted, and little do we realize what things along the roads we travel might mean. 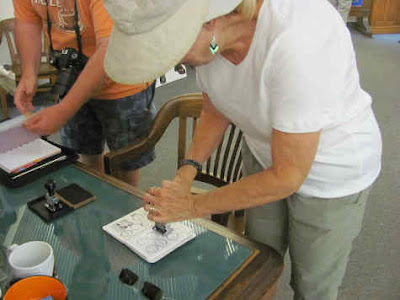 Our destination was historic Fort Smith, the place of movies. Clint Eastwood, Hang 'em High, True Grit, both loosely based on the fort and what took place there. There really was a Hanging Judge, and he really did send out US Marshals to bring in outlaws, and many were indeed hung from the nearby gallows. Actually the true stories are much more fascinating than what is portrayed in the movies. But isn't that what Hollywood is for, turning out propaganda masquerading as truth and trying to brainwash the masses. I've never understood why someone would spend money to see a movie or buy a DVD from someone, or starring someone who's ideology is diametrically opposed to their own. I guess the sucker born every minute adage is more true than ever. Speaking of suckers, Linda is a sucker for every NPS Passport Stamp Station, and here she making sure she gets those stamps in the right spot. We lucked out in choice of days to visit the fort because they were doing an artillery demonstration today. Later we walked through the nearby National Military Cemetery, seeing row after row on unknown Civil War graves. A moment waiting for a traffic signal in 1985, a moment in battle in 1862, the result is the same. Do we wait for some day to live life, or do we live Life when we can? It is up to each of us to answer that question, but when we drove away from our house six and a half years ago we had made our decision and we have never regretted it for a moment. Somehow or other things have a way of working out, even if the answer isn't always what we might wish it to be.