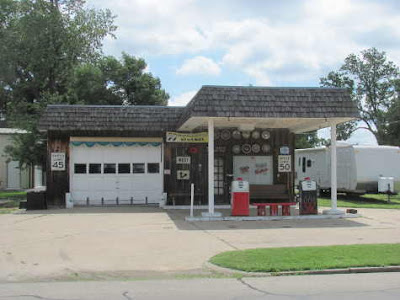 Dewey is a small town a few miles north of Bartlesville with nothing particularly outstanding to recommend it as a place to spend the day, so that is what we did. Maybe it was the connection between my beloved "Aunt Fern and Unky" and the cowboy movie star Tom Mix who's museum is in town. Or maybe it was the fact that the people we ran into were downright nice. Then again, maybe it was because we discovered most people our age had at one time or another worked for Phillips, or just maybe it was because being there just felt right. What ever it was, we had a great time, and the photo pretty much sums up the way I saw how the town looks at Life. Look close and you will see there are no hoses on the gas pumps. 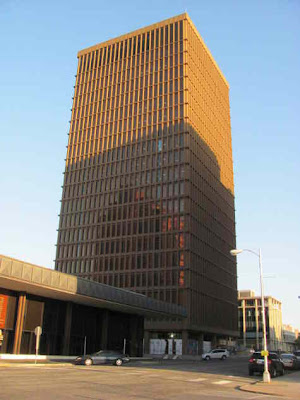 Back in Bartlesville, I drove Linda around the downtown area, but told her we would come back in the early evening and walk around as there wouldn't be any people there then. I was right, after five o'clock it was practically deserted with just the occasional person coming out the doors of the massive office buildings, all of which have a Conoco Phillips sign on them. As we walked along the sidewalk one obviously rather tired man carrying a brief case came out of one of the buildings just before seven o'clock, and I remarked to Linda, "Once that was me." She replied with a smile on her face, "I know, but not anymore." Nothing more need be said. It was a very nice day in more ways than one.