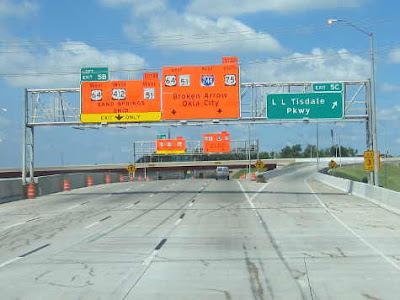 Off to Arkansas today on a route that took us through Tulsa. As we approached the city I remarked to Linda that one of the reasons I had been hesitant about coming this way was because many years ago whenever I had to be in Tulsa on business I remembered the freeways were narrow and in bad condition, but that wasn't the case at all today. But no sooner had I uttered those words than this appeared and then we were on one of those narrow nasty freeways I remembered. I will just have to learn to keep my mouth shut as we approach big cites. 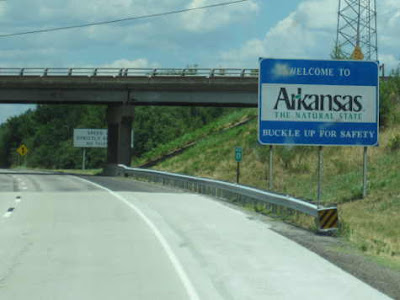 At last that hole in the middle of our US map can be filled. We plan to stay in Van Buren for two nights and visit Fort Smith tomorrow. The forecast is calling for very, very high temperatures so we may be doing everything in the morning and retire to the coach for the afternoon. There was a time when that wouldn't have been the case, but it seems the older I get, the smarter I get. Besides anything I'd be doing in the afternoon, I'd have to be doing it by myself as I know Linda will definitely be in the air conditioned coach. And yes, we did make sure we have a 50 amp hookup at the RV park we are at. (And both air conditioners are already running full blast as I write this at 9 o'clock on Saturday morning.) 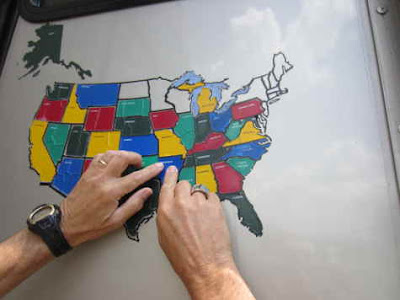 The deed is done, meaning the map looks a lot better. Linda wondered why it mattered. What could I say, after all, it's a guy thing. Later in the afternoon I spent some time walking around Van Buren's downtown which has many fascinating old buildings including a depression era post office with an awesome mural inside. It's one of those things we do on occasion that lets both of us have our space and do our own thing. Besides, it's far better than me staying at the coach and her going off shopping. At least in the financial department it is. Especially since I bring back photos while she brings back clothes. Still, either way, we sure do live a good Life.