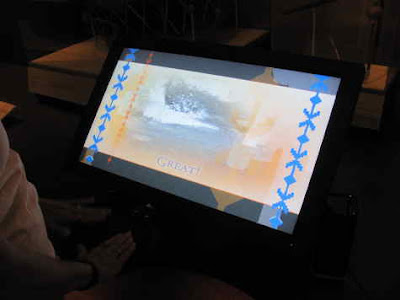 Some things need explanation and this is one of them. Our first stop, and it was in the cool of the early this morning with the temperatures forecast to be 105 and more today, was the Arkansas Museum. We ended up spending three hours in it, which is probably 2 and a half hours more than most people do, but it drew us in and wrapped us up. What can I say but we love history, even if it is history we have never been exposed to before.

I will skip all the things we liked about the museum except for one thing. Not that I liked it as much as Linda, actually I liked the Native American Gallery as much as Linda I just couldn't get the hang of this exhibit. Native Americans were predominate in Arkansas in the early 1800's, after all it was their land, and this gallery focused upon the atrocities the European American's inflicted upon them. Broken treaties, outright genocide and the precursor to the way the freed blacks were treated as sub humans under slavery and the later Jim Crow laws. But enough of that.

One of the displays was an Native American dance that had the incessant beat of the drum as part of it. In front of the screen was an electronic drum where visitors were invited to copy the beat of the dance. I tried, believe me, I tried, but all I could do was once during the entire dance hit the beat when it should have been hit. Linda looked at me. Linda laughed. Linda said I sure didn't have any blood in my veins that had anything to do with rhythm. Linda was absolutely right.

Now it was Linda's turn. From the first beat she was right with it. By the time the dance was over I was in awe. Then it dawned on me. It was a Native American dance. Linda has Native American blood coursing through her veins. Native American dance, woman with Native American blood. Why should I wonder why it should come so natural for her? Lucky Bob for asking the right girl to be my wife. And the miracle was that she said "YES!" Later I learned it was because I was reasonably good looking and had a college degree, meaning I had prospects. Forty five years later I still think she is the prettiest girl ever, and what can be wrong with that. Besides, knowing her, if I ever was to step out of line she would probably scalp me. 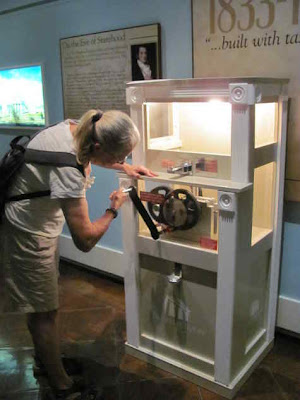 Another day. Another museum. Another penny smasher. Another penny for Zachary's (also Abby and Lindsey's) collection. Math may give him a bit of a problem, but geography and American history is a snap thanks to Grandpa and Grandpa. And as luck would have it, this fall he has world history and this fall we will be sending him smashed Euro penny's from across Europe. Unconditional Love. It has changed the world. It is the greatest gift we can give. 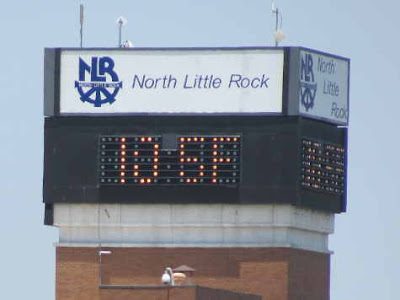 In the afternoon, with the temperatures in the unhealthy range, with ozone warnings being broadcast, with don't go outside unless absolutely necessary warnings being broadcast, Linda wisely spent the afternoon in the air conditioned comfort of the coach. I spent the afternoon out in the sun, looking at old buildings and an awesome sculpture garden. So many towns we have visited on this trip that really deserve two or three more days. I can't say we will ever be back, but neither can I say we won't. Life is so short, how can we ever have time to see everything we want?

I want to end with a thought that I have carried from early in our adventure. We had been on on the road for about 18 months when we returned to Carmichael, California where we had lived for over 25 years. One of our long time friends mentioned they had been fulltimers. They had driven around the country in 8 months, had seen it all, and while they were glad the did, they were disappointed it hadn't lasted longer. It is obvious everyone has their concept of what the fulltime Life is. For them, it was what they did. For us, there is no end in sight, and there are many places we want to return to again. Life really is what each of us makes it out to be. For some it it is slam, bam, thank you ma'am and it is over. For us it is a never ending Journey that we hope continues in the Life to come after this Life is over. To each their own. Kansas, Oklahoma and Arkansas -- We Will Be Back!!! Fly over country is the greatest.