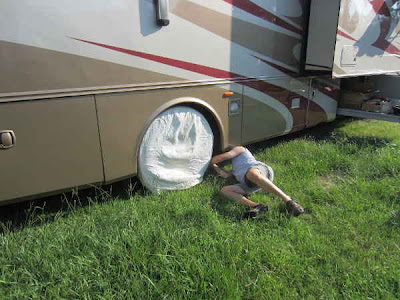 What you see here is the application of the old adage: "I'd rather be lucky than good." Translation: It is good that I was in the process of putting the tire covers on the coach. The lucky part was not the what, it was the where. Just to the back of this wheel and about two feet out from it was a fire ant mound that I was totally unaware of. I can't imagine what would have happened had I laid down and stretched out the way I am, but behind the tire instead of in front of it. I was very lucky and I know it. PS, the fire ant mound has been treated with ant dead. 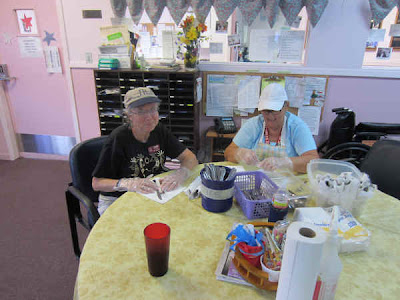 We had another training day today, and while we learned a great deal, only time will tell if we retained what we were told, and also if we were told all we need to know. When the trainer is being trained by the trainer trainer as the trainer trains the trainees, it isn't too difficult to believe more than a few things get lost in the process. Still, it's the great thing about having volunteered at a number of places. We've learned that it ain't perfect and it ain't gonna be, so lighten up and take it as it goes. The hardest part is knowing that the people who are the Care Center residents are most likely us 20+ years from now, so we really do want to do our very best.

Take these two old ladies for example. Obviously they have had some good years in their lives, but now they are pretty much limited to repetitive tasks that are easily learned. Stack all the silverware in the center of the napkin. Fold up the bottom, roll in the sides, place in the container of rolled silverware and repeat. From the look of the one on the right I should not have been taking a picture of their attempts at silverware rolling. I just hope it is a long time until things like this are in Linda's and my future. 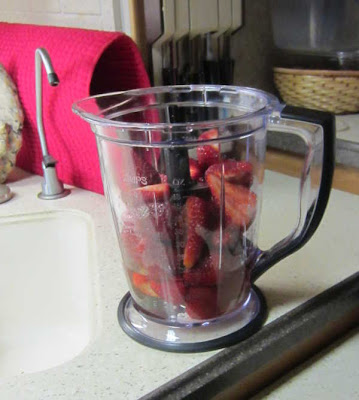 It was not a day of all work and no play because we did drive into town and do a little shopping. First we scouted out Lowe's as we longer shop at Home Depot since our daughter's late unpleasantness with a minority shopper at Home Depot resulted in her dismissal as a Home Depot employee. We now understand that discrimination goes both ways. Home Depot may not miss us but they are never ever going to get another cent from us. If the minority persons that our daughter identified because of their actions, to be potential shoplifters, spend money at Home Depot then Home Depot might possibly come out ahead though I doubt it. Otherwise it will be a lose-lose for Home Depot. Besides, one long shopping trip to Lowes has convinced us they have a far better selection of merchandise that Home Depot.

Also included was a stop at HEB, where we got reacquainted with the best darn grocery chain there is. We ended up with a few goodies, part of which was a two pound container of dead ripe strawberries that I turned into the best strawberry margarita's we have had in months. When you use about one and a half pounds of strawberries to make strawberry margarita's there is no doubt they will turn out to be awesome. From the compliments I was receiving from Linda I did at least one good thing today. Isn't Life like that. Given lemons some people throw them out. Others make lemonade. Which type of person are we? Hint, we love lemonade. How about you?