We're off to see the wizard, the wonderful Wizard of Oz 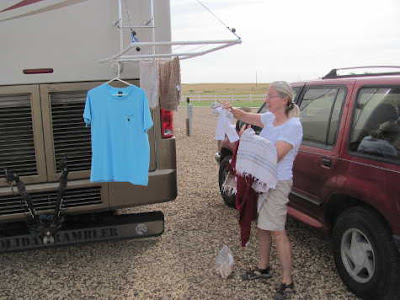 We really do not have a laundry day, meaning with the Splendide not having a huge capacity, laundry day comes every couple of days. As you can see, Linda took advantage of the nice weather and dried everything outside. In the past we have had a problem with the fact we had never glued the drying rack together, meaning in high winds it would pull apart on occasion. No longer however, as yesterday we finally glued it together.

You'd think it would be an easy thing, but with the clothes line in place, it proved to be not quite so simple. First there was the struggle to pull the connecting pipes out of the fittings, then there was the problem of too much glue on the joints. That first problem of not gluing the joints earlier, was my own doing. The second problem was also my problem, but it was due to my asking Linda to help me correct the first problem.

Apparently not only should a drying rack function properly, it should also look good. Think of white pvc pipe and gray pvc glue. Think of how ugly a tiny amount of that glue on the white pipe would look. As I dabbed the gray glue on that first joint I heard, "You're getting too much glue on. It's going to run and look terrible."
"It is not, and besides I need to put enough glue on to hold the pieces together."
"It's starting to run."
"It is not."
"It is too. Just look at it."

All of that had taken place as we glued the first joint and I could just imagine what was coming as more joints were glued. That's when in a stroke of genius I said, I'll hold the pieces and you glue them."

It wasn't long before I heard, "It's really hard get the right amount of glue on, isn't it?"
"Yes dear, it is." Interesting that now that she was doing the gluing there were no comments at all on my part about too much glue, or any runs. I may not understand women, but I do understand when to keep my mouth shut. Good Bob. 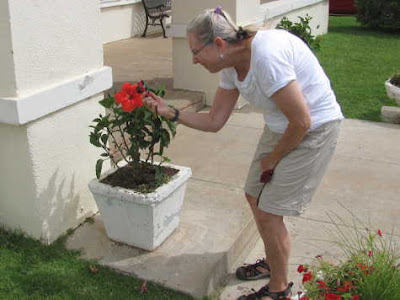 I know it has probably been very difficult for long time readers not seeing any photos of Linda taking a photo of flowers over these past months, but today that situation is being rectified. It is obvious from the expression on her face that getting the perfect posy photo takes a great deal of effort. Something else I do is to only post of the photo of her taking a photo, but never posting the photo she took. After today that will no longer be the case. 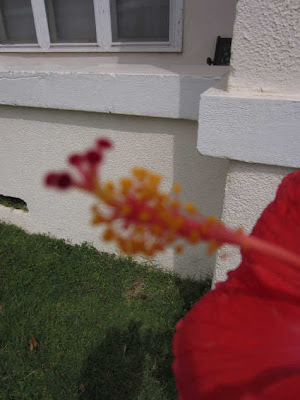 I readily admit to having little to no artistic talent. Linda on the other hand can look beyond what the normal person sees, and pick up the details others overlook. 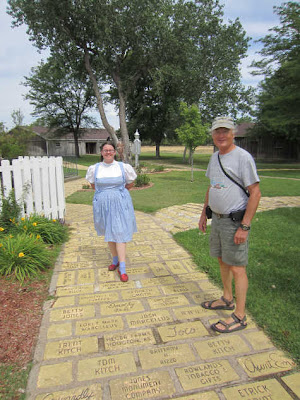 Since I made the reference to the Wizard of OZ in the title of today's post, I'd better mention we visited Dorothy's House/Land of Oz. If you visit, brush up on The Wizard of OZ before you go. You'll get a lot more out of it, and that's all I'm going to say.