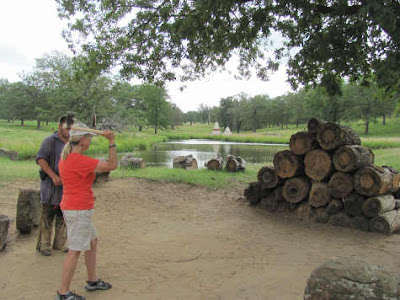 Woolaroc was the country home of Frank Phillips, founder of Phillips Petroleum, and in his later years he turned it into an awesome museum that seeks to show what Oklahoma was like before the modern days of the 1930's. There is so much to see and do that we spent all day there and really need to go back some other time to see all that we missed. Speaking of missing, Linda got to throw the tomahawk three times and she was 100% successful, missing all three throws. 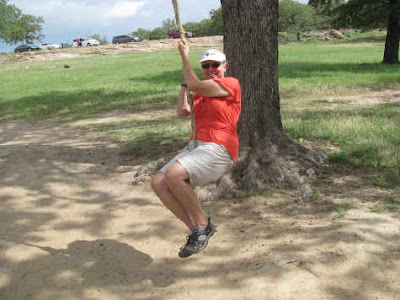 When it came to the rope swing she was again 100% successful, this time at acting just like a little girl. But since she really is a little girl at heart, it really wasn't that hard for her. I just couldn't get the hang of this knotted rope swing, and was lucky to swing once and get off without falling on my butt. 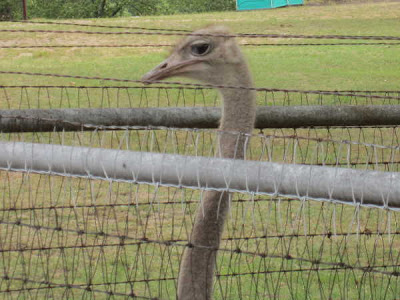 Besides being a museum Woolaroc is also a game preserve, which means I have had to sort through dozens of animal photos in order to find the perfect picture. I have to believe that as we drove around Linda never saw an animal she didn't photograph. And just not one photograph but two, three, four of each animal. What can I say, she loves animals, and that is good because when she treats me like a dog, it's usually like a good dog. 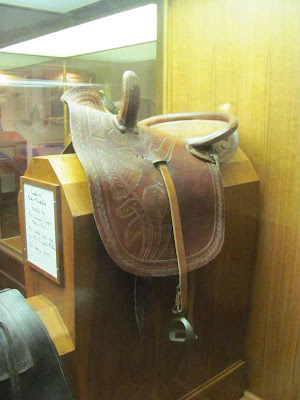 One of my continuing pet peeves. Museums are full of side saddles. TV shows and movies always show the female riding the same as the male. Didn't happen that way. Of course some people believe what the people of the make believe world of Hollywood have to say about politics. Which leads some people to the conclusion that intelligence is not a strong point for many in this country. 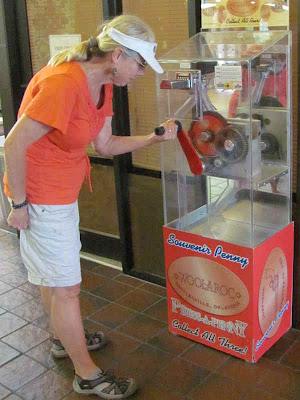 Guess who's getting a package with a smashed penny? Linda has so much fun deciding which image to use. I on the other hand have learned not to contribute my opinion as to which image it should be. How come things like this were never discussed in the "How to be a good husband" book that the minister gave us before we were married. Something tells me the bride got one titled, "How to get your way with your new husband". 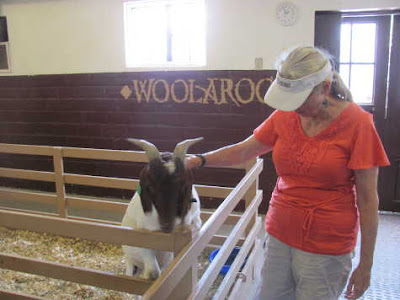 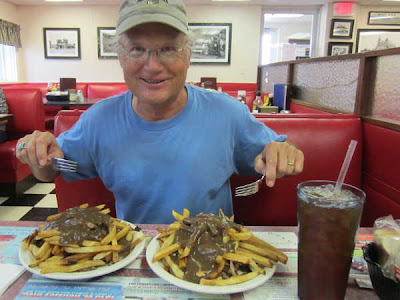 The fitting end to a great day. From the bottom up, two pieces of white bread, a huge mound of chopped roast beef, a layer of crunchy french fries and a topping of beef gravy. It has been 30 years since I last ate at Murphy's Steak House, but it was every bit as good as I remembered it. And you guessed right, there was no way we could eat all that was on that plate. Long ago when I was in Bartlesville it was a figurative case of too much business on my plate. Now it's a different Life I live, and today it was a case of too much food on my plate. Life is not a dress rehearsal. Don't be afraid to laugh, love and retire early.