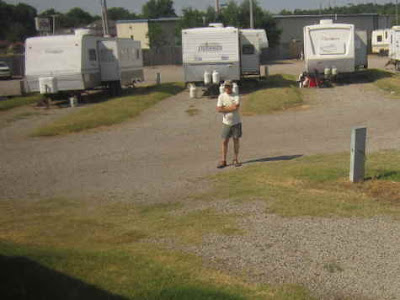 We were planning to be on the road by 10 o'clock this morning since it was about a three hour drive down to the Little Rock area. That got put back a little when, as I was doing all my normal outside activities, I disconnected the electric only to discover Linda had not yet stowed the MotoSat dish. Not good, especially since the both the temperature and the humidity were somewhere in the 90's. Eventually I moved out of the sun, and eventually Linda got the MotoSat stowed. Meaning eventually we got on the road, and wonder of wonder given the circumstances, no harsh words were exchanged, not that I didn't have a few in mind as I stood out there sweating and sweltering. I really couldn't blame Linda as she was busy doing things and I should have checked before unplugging the cord. Still, this was looking like it might be a good day even if it was a less than perfect start. 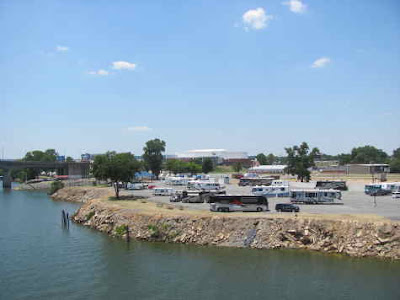 Our destination was a park on the river in North Little Rock directly across from the Clinton Presidential Library. The nice thing about arriving on Sunday morning, actually early Sunday afternoon, is there is very little traffic. That was good as the GPS had the entrance to the park some distance past where it actually was, meaning there was a rather sudden deceleration and turn as part of the arrival process. That wasn't all however, as we soon learned the 104 degree temperatures were the all time record for the day and even with both air conditioners going full blast, it was still too hot in the coach. 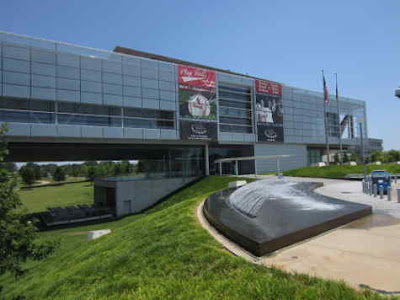 The solution was across the river, and after a quick lunch we walked across the pedestrian bridge that started at the end of the park and were soon in the Clinton Presidential Library. We had been in the Gerald R. Ford Library in Grand Rapids last summer so we were anxious to see how this one compared. 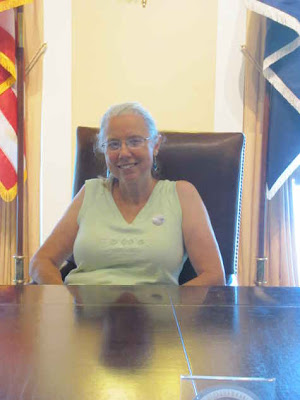 One exhibit was a mockup of the cabinet room in the White House. That is not an intern sitting in the Presidents chair, but that woman did wonder if Monica's dress would be on exhibit. Not in your wildest dreams. To tell it like it was, we found the Library a rather disappointing experience, being more of a Bill Clinton ego trip than what we were expecting of a Presidential Library. Maybe we were spoiled by how interesting and informative the Ford Library was. Or maybe Clinton is simply someone who is full of himself. I'll not dispute he did good things and also did some incredibly stupid things as President. But the over the top bragging we saw here was a little too much. Great men are praised by others, petty men brag about themselves. This was bragging and then some. And besides, the exhibits just weren't that great either.