A museum and more 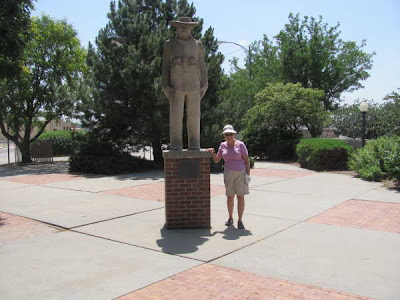 Ellis is about 15 minutes from Hays, Hays being where the museum Linda wanted to visit was located. So early afternoon found us in Hay's wandering around the downtown area as we waited for the museum to open. On one corner we found a plaque that said Wild Bill Hickok had killed a man in a gunfight at that location. Later we stumbled upon this statue of Wild Bill, and Linda just had to have her picture taken next to him. One hundred forty years apart, yet kindred spirits. Linda sure did enjoy those TV programs when she was a little girl. 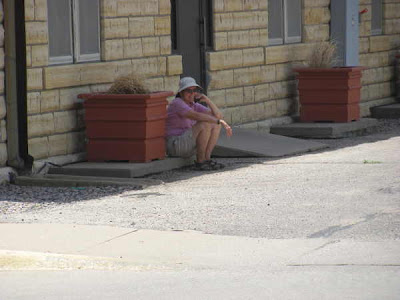 I enjoy walking around small town downtowns and looking at old buildings. Linda has other ideas as to what constitutes a good time. Imagine my surprise as I was walking down one street and look over to see a little old street person hunkered down in the shade behind an old building. On the other hand, it just goes to show how smart I was to marry a girl who has enough sense to get out of the sun when it is really hot. A smart Bob is a Good Bob. 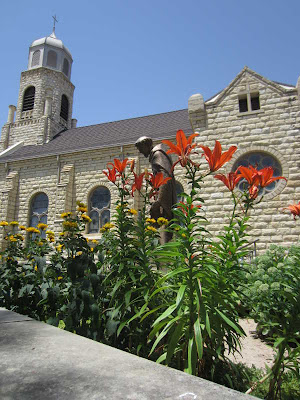 I was taking some photos of a spectacular church when I noticed Linda had emerged from the shade and was taking some photos herself. I was thinking that maybe she was appreciating the beauty and the architecture of these old buildings that I get so much enjoyment from, but when I downloaded her photos I discovered she was really taking photos of flowers. I guess a few flowers are better than complaining about what I was doing. 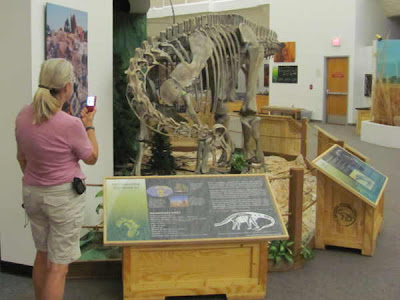 Eventually we did get to the Sternberg Museum, where Linda got her fill of of the past. I will not attempt to post even a tiny bit of all the photos she took, so if you want to see more you'll have to go in person, though we both agreed we sure got more than our money's worth from the nearly three hours we spent there. 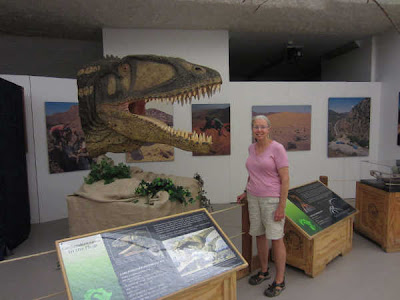 My title for this one is: Two toothy grins. A little girl in a candy shop does not begin to describe how excited she was as we wandered through the various exhibits. I always thought when I was little boy that women in their sixty's were so stuffy and serious. And yet here is my wife at that stage of her Life, and all the while she's acting like a little girl. Did I pick good or what!! 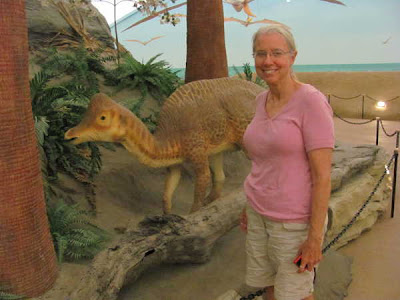 Just one last photo to prove that all those others were no fluke. Suffice it say that we both had a very good day and we will be sorry to be moving on to Concordia on Monday, but that only means new adventures await. Remember: Life is not a dress rehearsal. Don't be afraid to laugh, love and retire early.