Linda had sold several more things on Ebay over the weekend, so she wanted to get them mailed before we left Ellis. Interestingly enough, when she walked up to the counter in the post office, the clerk asked her if she enjoyed her walk over from the campground. We're not sure how the clerk knew that, but it's exactly why we love staying in small towns. 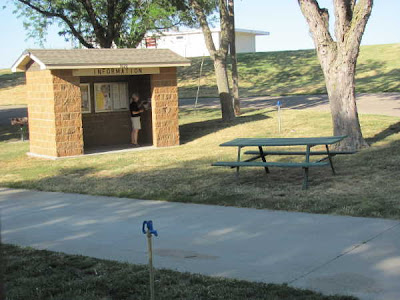 Some hours later we were in another small town in Kansas. We had selected a route that had us driving on roads we don't normally like to take, I-70 and a four lane state highway, but it really did make for an easier drive, especially with the wind blowing like it was. We have a number of things we want to see and do while we are in Concordia, so we are not sure whether we will be here for two or three nights. When we started out on our Kansas travels we were planning on only seeing the southern part of the state, but we keep reading about all these interesting places, so plans just keep changing. But we are not wandering up into Nebraska this trip, at least I think we are not.

We are at the city owned Airport Campground, which is just south of Concordia, and is another of the donation type RV and campgrounds that many cities in this part of the country seem to have. As I write, the birds are singing in the trees, Linda has deposited our donation, and Life is as good as it gets. The small towns of Michigan's Upper Peninsula last summer, the small towns of the midwest this summer. Thank you Sara N. Dippity, thank you so much. Since we really, really don't like to sit in one place for a long period of time, it's going to be interesting to see how spending three or four months at Retama goes this winter. 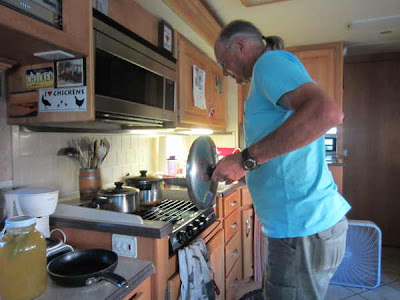 My attempt at flipping the shrimp in the skillet. Linda was laughing so hard at my non-flipping that it is a wonder she was able to take a photo. And it always looks so easy when they do it on the cooking shows. The good thing was the shrimp stayed in the skillet instead of ending up all over the stove. Plus Linda proclaimed they were really great tasting, so I at least succeeded in that regard.

Our day was not done yet, as later we drove over to a nearby cemetery to take a few photos of markers that people on the Find A Grave website had requested for the town cemetery. As always, things are never as easy or simple as planned, but we were able to find and photograph a couple of markers, and also confirm that there was no marker for another request. You know, some people retire and sit in front of the TV in the evenings. We go to cemeteries in towns we've never been in before, and try to track down the grave markers of the ancestors of people we don't know and will never meet. Life truly is what we make it.