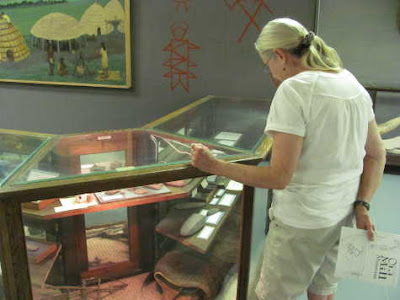 We spent much of the afternoon in the local history museum. As you can guess, Linda sure got to do her thing, including looking at all the indian artifacts that had been collected in the local area. 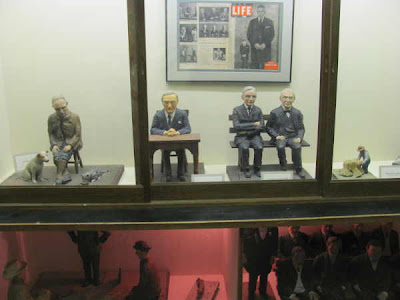 What caught my eye was a display of life like figures created by a local man out of cement. No wood carving here, those likenesses, including Henry Ford and Thomas Edison, are cement. The one in the center was supposed to President Franklin Roosevelt, but I just wasn't seeing the likeness that was so apparent in the other two. Still it made for another of those fascinating finds while traveling off the beaten track. Either that, or we are easily impressed. 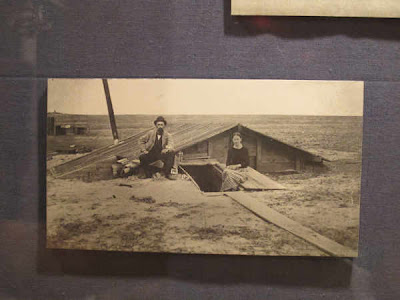 Yesterday's Daily Journal had a photo of a small hole in the ground which was all that remained of a pioneer dugout. Here is a photo of what a much larger one looked like. We have the saying that home is where park it. I wonder if on the Kansas prairie back then the saying was home is where you dig it. Guess we could say the same thing today, except that the meaning of the word "dig" would be completely different. 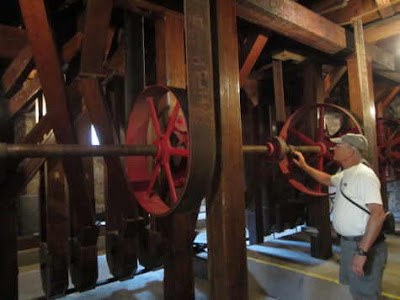 I will not post more than one photo out of the fifty or so Linda took inside this old flour mill that was the museum's gem. We both expressed so many ooh's and aah's as we walked through it that I can only say that to appreciate it, one simply has to see it. As Linda commented when we finally walked back outside, it would be worth coming back to Lindsborg the one weekend a year they operate it, just to see it running. 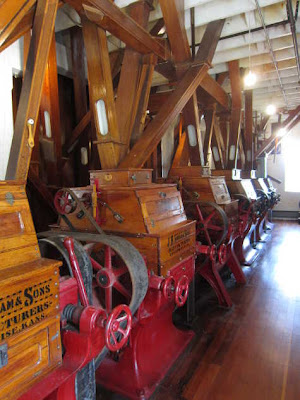 Just one more mill photo to whet your appetite. I suspect there will be many more on Linda's blog, but I will tread lightly there.

After the mill, we visited a number of outdoor exhibits in the 95° heat. As we were finishing up I looked over at Linda and noticed a slight sheen of perspiration on her skin. The kind of look they spend hours spraying on the models during photo shoots to get that just awesome look. So I blurted out, "Wow, do you ever look hot", thinking I had just given her a really nice compliment. The problem was, she was hot, but not in "hot" hot, but in heat hot, and I'd just elevated her temperature even more.

With a very hot glare, I was hotly informed that I was in major hot water for that hot comment I'd just made. That meant we hot footed it back to the Explorer while I kept my mouth shut to prevent any heated discussion from breaking out. Once we were back in the cool confines of the coach, things immediately cooled off, both physically and emotionally. Now looking back over it, if I had it to do again, I'd still tell her she looked "hot". Because she really, really did.