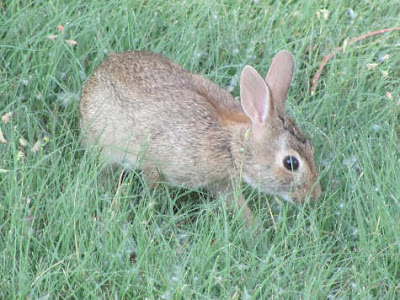 Today we were off to visit several museums and then chase down some sites on the Santa Fe Trail. That meant a fairly early start, but when we arrived at Fort Larned shortly after it opened we discovered we weren't the only ones up early. It was pretty apparent this cotton tail understood the old adage, the early bunny gets the best grass, and it was certainly enjoying itself. It also made us realize that we didn't need to rush through the day, something we took to heart. 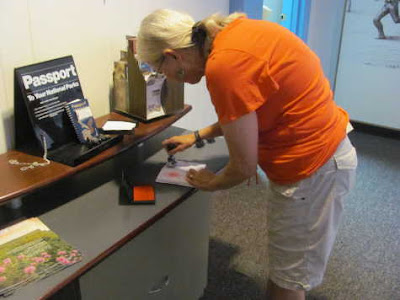 Linda had her NPS Passport book ready when we waled into the visitor center. I heard her say, "I wonder which section it is in?" It turned out to be the orange section and it wasn't long before she was checking the passport stamp to see if it showed the correct date. It turned out the date was wrong, it was the 6th instead of the 7th, so she changed it and soon two new stamps where in her book. This is always my chance to glimpse the past, to see her as a little girl, and it sure brings a smile to my face. Lucky Bob. 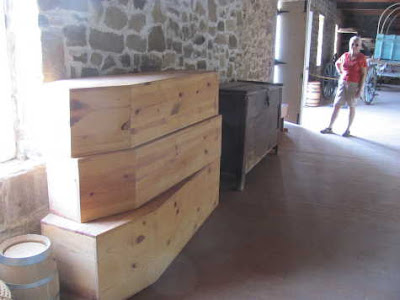 We were in the commissary building when I heard Linda say, "You know what these are?" as as she put her hand on three stacked wooden objects.
"Sure I do." I replied, without saying what they were. Seconds later I was looking at some nearby boxes when I caught a movement out of the corner of my eye. My wife, that sometimes little girl, was actually trying to lift up the lid of the top most coffin to see if anything was inside!

My "I can't believe you're doing that", caused her to flinch just slightly, and then move away. I looked back at the stack of coffins, and it occurred to me, this would make a great photo. I framed the photo, and I heard her state rather emphatically, "You're not going to write about this in the Daily Journal." I reframed the photo to take in my wonderful wife with hand on hip and fire in her eye. "Who, me?" I said. 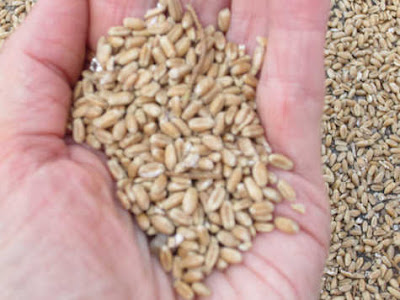 Later we had stopped at the Santa Fe Trail Museum, which we really enjoyed, then after returning to the coach for lunch, we were off to Pawnee Rocks to visit more sites on the Santa Fe Trail. One of the interesting things about downloading Linda's photo's is that I never know what I will find. When I stopped at a Kansas Historical Marker to read about the area, Linda had stayed back by the Explorer. Downloading her photos I discovered she had obviously been playing in a pile of spilled wheat. The little girl can grow up, but the woman will never stop being a little girl. Am I lucky or what. 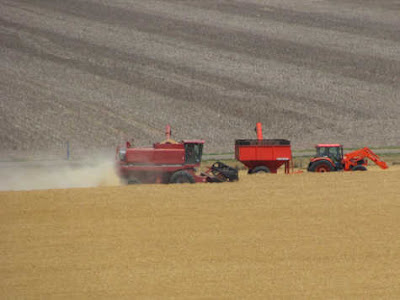 We stopped at Pawnee Rocks, a major point on the Santa Fe Trail, a place where Kit Carson had once been, A place where early travelers had carved their named in the soft sandstone. So what did I find when I downloaded Linda's photos of this famous rocky outcrop? You guessed it. Photos of combines in the nearby wheat field. Guess you can take the girl out of the farm, but you can never take the farm out of the girl. And I would never have it any other way. It was a very good day, even if we didn't find all the Santa Fe Trail sites we were looking for.