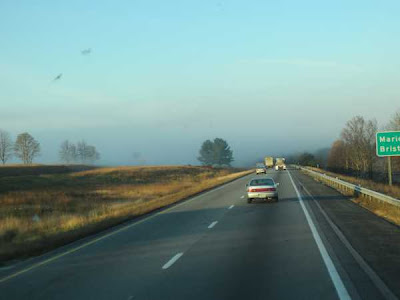 It is true that we do not like to travel great distances any given day, but that doesn't mean we don't so it. Right now we are in the process of fleeing the cold weather of the north, at least the north as we view it, and heading towards the warm south. Our travels have been accompanied with many snowbirds on the roads, and it comforting knowing that our assessment of what is cold weather is correct. This morning we were on the road right at 7 o'clock and our route would have us traveling through Virginia, Tennessee, Georgia and Alabama to our destination. Or stated another way, from fog to rain. 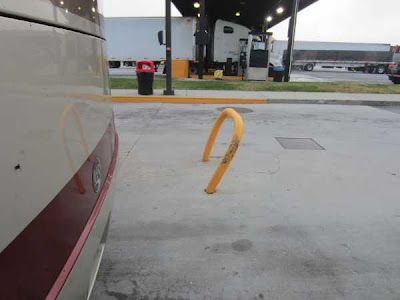 Our first stop this morning was at the south end of Wytheville, where there was a Flying J. After our trip on empty to fill up with diesel the other day, it is going to be a while before that happens again. The Flying J along I-81 on the south side of Wytheville has an easily accessible RV island. It wasn't until we were starting to fill our tank that I remembered why I don't use the RV pumps at Flying J's. It's because they have the little hoses that take forever to fill the tanks, and this was no exception. It was still okay, as at 7:10 AM the pumps are most definitely not busy. Still it took putting the credit card in twice to get the tank full, meaning it was after 7:30 before were on the road. Still, it's an easy in and out, so if your looking for a nice spot to fill up along I-81, the Wytheville Flying J at the south end of town is a good stopping place.

Now to explain the photo. I don't know for sure what happened here, but if there was a husband and wife in the RV that bent this heavy duty barrier to the point you see it, I can only imagine the words that passed between them. These pumps are not nearly as narrow as many of the Flying J pumps are, so it must have taken a real fine example of someone who shouldn't be driving an RV to do the amount of damage to the barrier pipe that was done. Oh well, just another of those unexplained mysteries of Life. 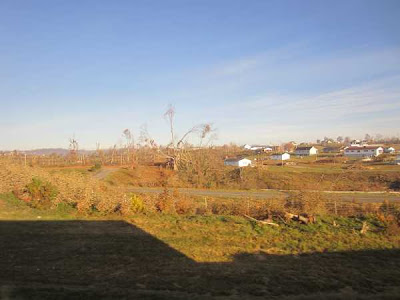 About 30 miles north of the Tennessee border we came face to face with the destruction that ravaged many places throughout the south during this spring. In this area there were a number of people who where killed by the storms, and the number of new buildings testified to the power of the storms. We were so lucky to have been staying just west of where many of the storms were spawned this spring, but our hearts go out to those who were affected by something they had no control over. 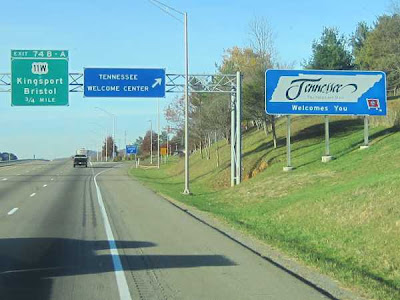 Then it was time to cross over into Tennessee. The miles rolled off, we drove through Knoxville with its narrow lanes and heavy traffic, but still traveling the interstate was saving us huge amounts of time and our goal was get as far south as possible. Next up was Chattanooga, where the lanes were wider, and the traffic was lighter, at least until we got to the west side of town on I-75 where it was almost bumper to bumper. 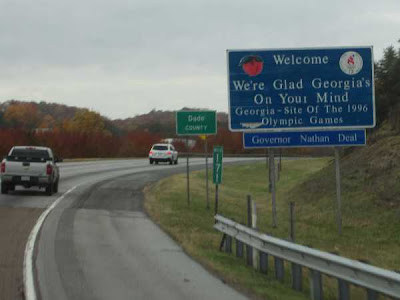 When we turned off onto I-59 and started south through Georgia it was a different story. Light traffic, wide lanes, though we did note that the concrete pavement was anything but smooth. Maybe it was because this stretch of highway was only a connector between Tennessee and Alabama, or maybe it was because Georgia really doesn't care about the condition of their roads. Whatever the reason, it left us with a negative impression of Georgia, and we are not going to be spending any time, nor spending any money in Georgia during this trip. They don't care about us, why should we care about them. 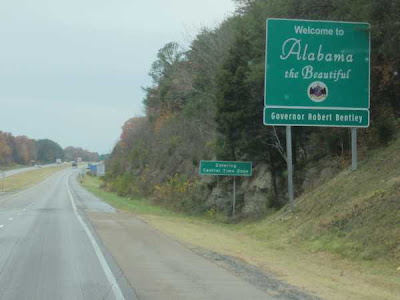 Alabama, a state that really wanted us to stay and visit. We stopped at the Welcome Center at the first exit, and from the information and assistance we got, we will be spending time Alabama. Some twenty miles further we reached our destination, Fort Payne, where we plan to set a spell and do a whole lot of nothing. It's been months since we could just be somewhere without having to do anything, and that is what we are looking forward to doing. Exactly nothing. What followed was a lazy afternoon, an evening meal of meat loaf, baked sweet potato and green beans, followed by a lazy time of wine, women and song. Okay, maybe it was only wine but a guy can dream, can't he? Tomorrow, for the first time in months, Linda can sleep in as long as she wants, and if we do nothing at all, it is almost more than we plan to do. Life, lived to its fullest, even if it is doing next to nothing. But then, just what is retirement for, if not the chance to do absolutely nothing on occasion.
Posted by Bob and Linda at 10:23 PM