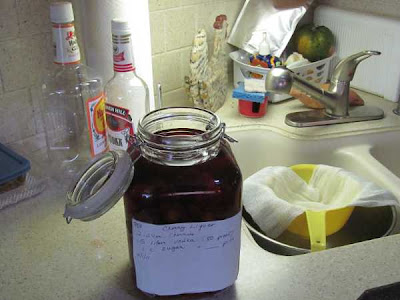 It finally arrived, our planned day of doing absolutely nothing. For far too long we have had something we needed to do each and every day, but not today. No plans, but still it didn't mean we didn't do a few things. After all, there were still meals to prepare, though we did manage to skip lunch as a formal thing. One of the few things that could be considered as doing something was when I got out the prunes and refilled the container. Yes, I have to admit it. Every morning we each get two of them, not because we need them, but because we enjoy eating them.

The second example of doing something involved bottling the last of the cherry liquor. There was no mistaking what was in the container, Linda having made sure to label it when we made it. This was the one with the cracked cherry pits, which meant the cherries were going to be squeezed to expel any liquid, and then they would be thrown away. Last time I had taken care of the decanting of the liquor from the cherries, but today Linda wasn't letting me close. It wasn't because I had imbibed of the cherry nectar last time, it was because I dared spill some of it. 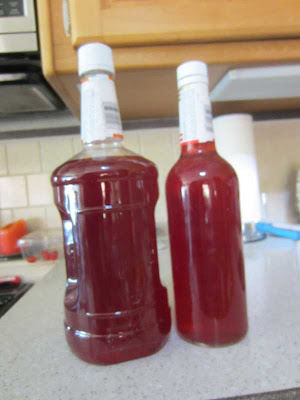 This photo is a slightly out of focus end result of Linda's efforts in the area of liquor bottling. You won't find me commenting on the fact that the spillage was cleaned up in an unusual way. You won't find me attempting to make a connection between said spillage sucking and the out of focus photo said wife took after said spillage sucking. In my way of thinking, Linda did an outstanding job of cleaning up every last bit of spilled cherry liquor, not leaving a single drop. I truly am a lucky man to have such a considerate wife, that she would go to such lengths to remove any vestige of spilled cherry liquor. P.S., if you're interested, I have a bridge for sale, and it's very cheap. 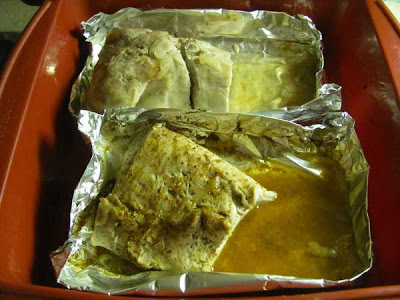 Food photo time. One could contend that the two previous photos could fall under the food photo heading, but that would only pertain to Linda, so we will skip that for now. A pork tenderloin. Divided into two unequal parts, one of which is doused with wine, the smaller part with "Fiery Vinegar Barbeque Sauce." And I'll bet, based on the earlier paragraphs, you can guess who had the pork drenched in wine. Hint: Linda doesn't do anything with the word "Fiery" in the name.

I couldn't believe how good they turned out to be, as they baked for 50 minutes in a 350 degree oven. It was the perfect end to a day of total sloth, though she who plans such things has already lined up several trips for us tomorrow. Some days are like today, a day to literally and figurative do nothing. A day to recharge and rest. A day to just enjoy the Life we are privileged to live. A day that is just another 24 hours in the life of a fulltimer, somewhere on the road of Life.
Posted by Bob and Linda at 9:20 PM