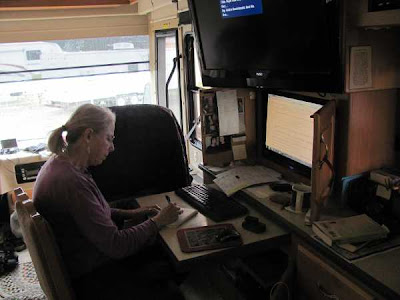 It was warm, but rainy day in northern Alabama today, with just boring domestic stuff happening. Just the routine living of the routine Life of people who live in an RV. Much of that routine of the day centered around preparing for where we will be and what we will be doing for the next 5 days. There were lists to make and double check, plus nagging little problems to take care of, none of which were very exciting, but all of which were deemed necessary by she who deems such things. 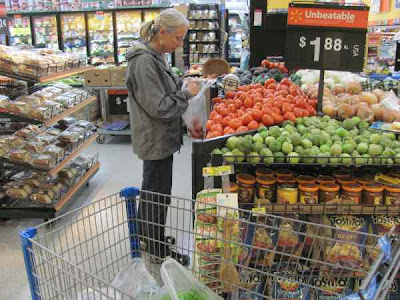 Since we don't plan to be near shopping for some time, it was also necessary to stock up on those things that we just can't do without. That meant a trip out in the rain, which allowed Linda to test out her new raincoat. As luck would have it, it immediately stopped raining so she still doesn't know how it will work. As you can see, she who deems tomatoes to be an essential daily food, had deemed it necessary to make sure there was an ample supply on board. 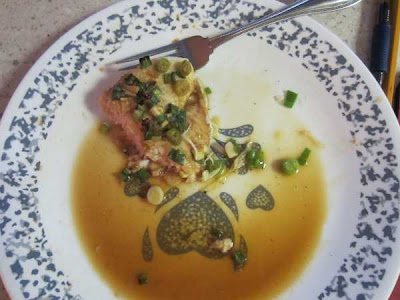 Food, it was big food day as we made a big pot of southwestern beans, which Linda followed up by later making a big bowl of sweet potato salad. There are some good meals coming up, each consisting of something grilled with potato salad and beans. Of course that doesn't relate to the above photo, though in a way it does. For dinner I made our favorite fish dish. It's Orange Roughy baked with a special sauce. Linda said she would taste it, then take a photo. Mind you this dish is so good we each eat a half pound of fish. To my way of thinking she had more than just a taste before she took the photo, but then again, maybe we were lucky to have a photo of any of it all. As I said earlier, it was warm, but rainy day in northern Alabama today, with just boring domestic stuff happening. Then again, Life is what we make it.