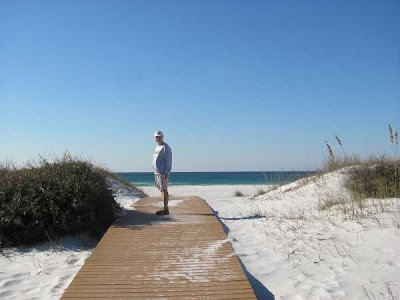 Well we finally made it, made it to the beach with the Gulf of Mexico in front of us, that is. Many, many beach photos today and I'll just let Linda use as many as she wants for in her blog. In fact I'll just let her do most of the blog posting today. 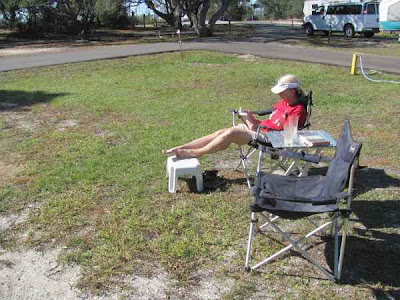 It actually wasn't a full day of beach time, as there was also a goodly amount of unbleaching time put in by Linda. I know she thinks she was cursed by have skin that tans to an off white, but as I like to tell her, "You've got a great mind and personality, plus your hull is very nice looking too." Some women think that men don't know to compliment them, but with the above statement I should have laid to rest any fears that I don't know how to give a girl a very nice compliment. 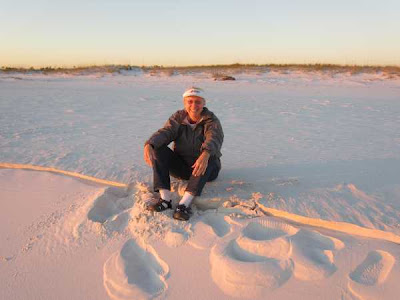 Notice in all the compliments I poured on her in the above paragraph, I never mentioned walking without tripping over her own feet. This is why. One minute I was talking to her and the next minute she sitting in the sand on her lovely little butt. As I learned, the lean, lithe athletic woman I married misjudged the edge of the sand and the next thing you know, down she went. No real damage done except to her pride. Of course it didn't help that there were a number of people out on the beach to also watch the spectacular sunset who had ringside seats for Linda's spectacular buttset. 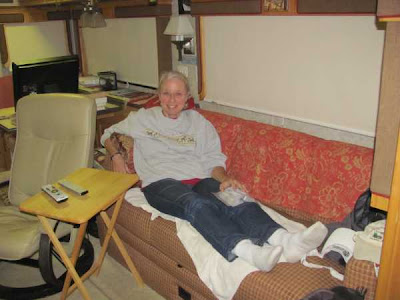 A while later, back at the coach, I go outside to get some almonds out of the bay and I return to this. I admit to doing a little, but just a little, teasing about her display of how not to sit. Whether this was an attempt to show me that she had more than just her feelings hurt, I don't know. She says she really didn't hurt anything, other than her pride, but something tells me there's going to be a sore woman in the coach tomorrow. 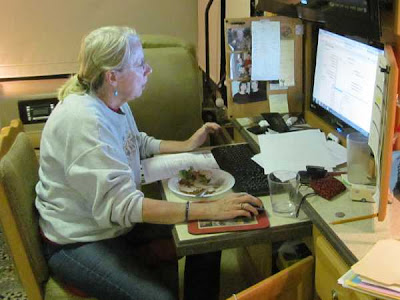 We ended the evening making plans for next fall, signing up for a Rick Steves tour of France and doing a rough outline of how we will be spending our 2 1/2 months in Europe so we can build a budget. When we started this journey of fulltime living we realized that living the life of, some day I'll, results a life of I wish I had. Besides, since we travel all the time, what better way to take a vacation than to travel. After all, it's not the destination that matters, it's the journey, and what a journey it is.