A drive through the rain to Florida 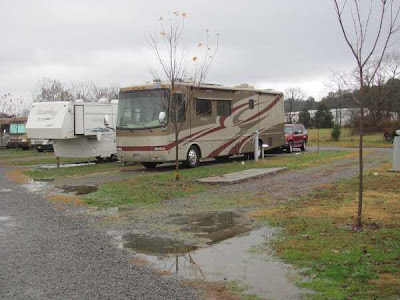 It was a warm, but rainy morning in northern Alabama today, but we had exciting things happening. We had decided to change our plans once again, reviving our earlier travel plans to visit Florida, though with some very major changes. Instead of traveling to the west coast of Florida, we were heading to the western end of the Florida panhandle. The weather forecast was calling for rain, but with Thanksgiving being next week, we were limited in how long we could stay at the park we had selected, Fort Pickens. 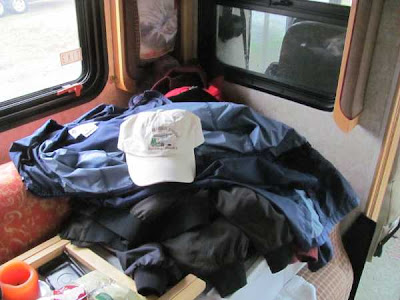 It was going to be a long day's drive and so we wanted to get on the road before 8 AM, and believe it or not, we did it, pulling out at 7:45 and heading to a truck stop for fuel. Part of the getting ready process involved my collecting all the jackets and other cool weather outerwear, then piling them up on the couch. Looking at it, I commented, "We sure had a lot of jackets out."
Linda looked at the pile and replied, "Those are all yours except for the ones that are mine." [Editor's Comment: I really did say that!] I said nothing, mostly because anything I would have said would have gotten me into big trouble. I did think of a few blond jokes, and how true they were. A closed mouth Bob was a Good Bob. 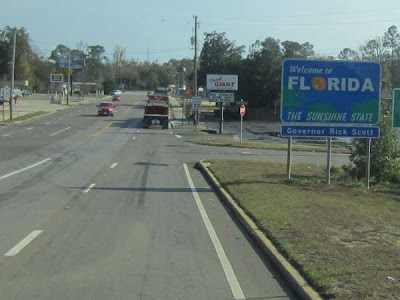 Many hours later, what we were looking for came into view, and while we still had nearly a hour's more driving to do, it was a good feeling. I don't know if it was how a snowbird feels when they see that same sign, though it really doesn't matter. And even if it isn't as warm as it might be over the next few days, it still meant that we were in the warm south. Our route took us through Pensacola, then across a long bridge, next was turn to the west and a drive out along Santa Rosa island. 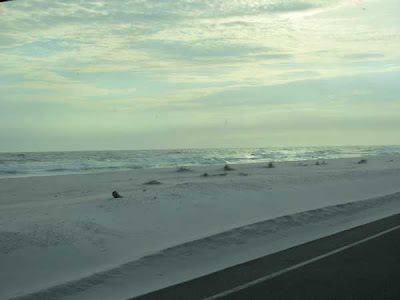 We will be here until Monday, getting our little bit of Florida fix. We really don't have anything planned other than walking along the beach, visiting the fort, and hopefully soaking up at least a little bit of sun. I had to laugh at our appearance, as shortly after we parked in our site, I was sporting tee shirt, shorts and Teva's. Linda must have still been on northern Alabama time, since her long sleeved shirt, jeans and Keen's with socks suggested that she still hadn't made the transition to Florida living. Didn't really matter though, because the important thing is that we are here, a here we didn't think we would get to. It was warm, but cloudy evening in western Florida tonight, but what an exciting time it was.