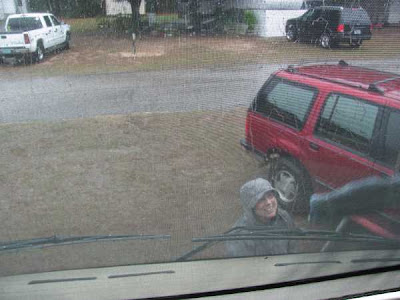 It rained during most of the night, it rained most of the day, and it seemed like everyone in the park stayed inside their RV's. Almost everyone that is, with the exception of she who enjoys washing the coach windows. Actually it wasn't just that the windows needed washing, it also gave her a chance to try out the new to her rain coat she got at the Unclaimed Baggage Center. And as luck would have it, no sooner did she go outside than it really started raining hard, giving that rain coat a very good test. 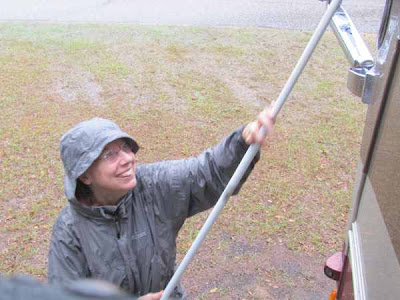 Either that rain coat was working like a charm or it was letting so much water in that her brain was turning to mush, because once she was done with the front window, she tackled the side windows, ending up doing all of them. Lest you wonder why I wasn't out there helping her and making sure my new to me rain coat functioned properly, somebody had to bite the bullet and stay inside to take photos of what was taking place outside. It was a tough job, but I did my best. 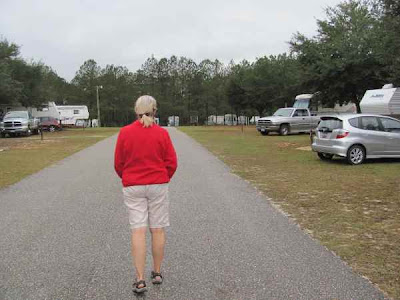 Yesterday I ended my post with this: "Looking ahead, it will be interesting to see if the coach physical fitness director has another 30 minutes of walking scheduled for tomorrow", and today I found out just how prophetic those words were. In the very late afternoon it finally stopped raining, and that was when what is quickly becoming the family fitness fanatic declared that it was time. My ears shot up at that only to learn that what it was time for was our half hour of walking. It turned out she wasn't the only one who had exercise in mind, as there were also a number of other women out walking their husband's. Yes, sometimes we men seem to lead a dog's Life, but with a woman like Linda holding the leash, who's complaining. Life is indeed good.

Email ThisBlogThis!Share to TwitterShare to FacebookShare to Pinterest
Labels: Alabama