No photos, but sure fun to watch. Sunday means all the weekenders are leaving and the 5th wheel several sites down that took the hour to get backed in the other night was making preparations to leave. They went on and on opening compartments and putting things into them, but finally it was time to back the truck up and hitch up to the fifth wheel. I counted nine times he tried to get aimed right, with multiple exits from the truck and a number of times adjusting the height of the 5th wheel before contact was made.

That wasn't the best part however, as there was more action to follow. Once hooked up, he pulled out of the site in one shot, as opposed to the hour it had taken him to back into it, and we thought we had seen the last of him, but how wrong we were. We have all had the experience of that first time at the dump station, but how many of us have taken 55 minutes to complete the task?

Ladies and gentlemen, I think we have a new winner in the best imitation of "RV, The Movie" dumping contest. Unfortunately we could not see all that took place, and in hindsight, we are not sure we would have wanted to see it, but we did get to the see the last act in this play, which was watching him wash his shoes off with the water hose at the dump station. We will let you fill in whatever details of the dump you might imagine. As for us, we are glad our first dump is in the distant past. 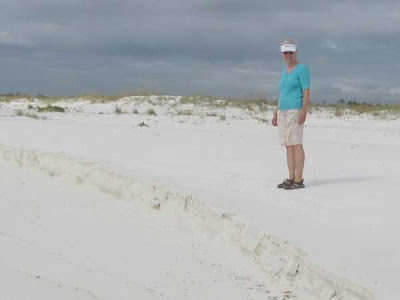 Later we took a walk down the beach. What can I say, we have been to the beach, as in camping on or very near the beach, only three times during our six years of fulltiming, and every time the weather has been lousy. Today for once it was nice and we were making the best of it. Here is Linda cautiously avoiding the precipice that looms at the edge of the sand. One small mis-step and over the edge she goes for a major buttset. But not today. 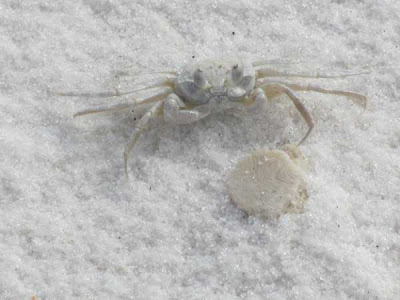 Linda's twin sister. Okay, maybe not her twin sister, but there have been times during our over four decades together that I have felt she has some kind of kinship to this critter. I realize it doesn't have fur, fangs and teeth like a grizzly, but sometimes she exhibits multiple ferocious personalities. Lucky for me I have survived all the attacks that have occurred. 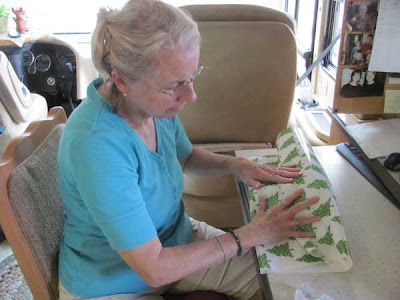 Even grizzly's have a soft side, and so does the Linda. Entitled, Grandma wrapping presents, she was model of loving grandmaism as she wrapped present after present for our grandchildren. Then it happen, she ran out of scotch tape, and fortunately there were no grandchildren nearby to hear what was uttered. Somewhere down the road there is a tape refill to buy and more presents to be wrapped. Until then I will be keeping a low profile, continuing to only write what I observe. Some days are more interesting than others. Only you can decide how interesting today was. As for me, I won't say anything more. Simply because anything more that I might say is going to get me in more trouble than I already am. Life is good and we should keep it that way.