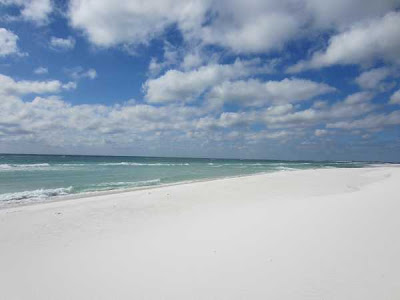 This is a morning beach photo, but I really need to start at about 10 o'clock last night when we left the coach and walked out towards the beach to see if we could view the Leonid Meteor Shower. It was cold and windy night, but we actually did see a few, second or so long, flashes in the sky. Not as spectacular as some 10 plus years ago when we stood out on the shores of Lake Tahoe at 2 AM and saw meteorite after meteorite flash across the sky. Still what we saw was more than probably 99.9% of all Americans saw, and besides, it's what we do in Life, which is to try and travel the road less traveled. 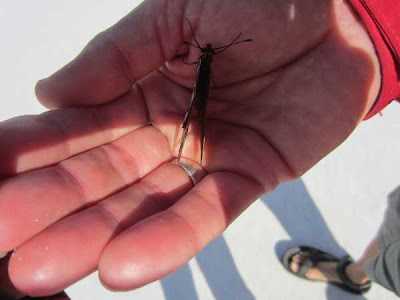 Walking along the beach I spied what I thought was a dead butterfly partially buried in the sand. Reaching down, I scooped it up, showing Linda so she could take a photo. Then as I held it, it's wings fluttered and it tried to fly, only to be caught by the wind and be blown from my hand to skitter across the surface of the sand. I ran after it, finally capturing it again, and this time making sure to cup it in my hands to protect it from the winds. 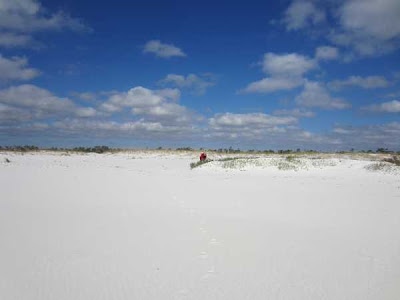 Then I carried it some distance inland, while it clung mightily to my hand, and deposited it on a small bush that was partially protected from the wind. It immediately grasped the plant and as I walked away it was still clinging to that bit of foliage. It's what makes us who we are. It's what us human. It's what makes us no different from anyone else. 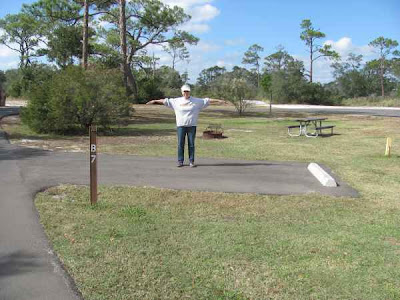 Not to say that your RV might not fit into your site at Fort Pickens, but if you make an online reservation, you just might want to make sure the RV will fit into the site you pick. Actually they have an online reservation system that lets you know how big your site is and what size RV will fit into it. That didn't prevent us from seeing a new world's record in incompetent 5th wheel backing being set tonight. Over one hour of backing and pulling forward, backing and pulling forward before the 5th wheel was properly aligned on the pad, and I really kid you not, it literally was an hour from the time the fellow started until he stopped. Then it took him almost another half hour to unhitch and move the truck from blocking the campground road. I know that everybody has to start somewhere, but he proved the point that there are people who should never start in the first place. Based on the looks and body posture of his 13 or 14 year old daughter as she stood outside watching as he did his thing, I wouldn't doubt that she isn't scared for life. 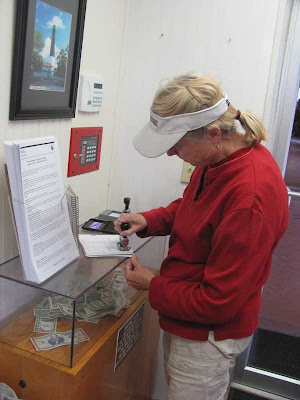 I'll leave it here, with Linda in stamping heaven as she collects two more stamps of Fort Pickens for her National Parks Passport Book. There are no doubt a number of fort photos on her blog, and that is good. We did visit the fort, going on a great volunteer led tour, then wandering around the inside on our own. This is really a neat place, maybe a little too far off the beaten track for some. Maybe a little too cold this week for what we would really like. And maybe, just maybe, it was a perfect place to spend a few days, immersed in history and the present.

We still have two more days here, and though we have walked the campground a number of times, we just can't catch a couple we would like to meet, sitting outside their RV. Still, Life is what each of us makes it, and if we spend time dwelling on what might have been, we miss out on what might be. Along that line, today we signed up for another tour that we will be taking in Europe next fall, this one for Spain and Morocco. Life is short, live it to it's fullest.