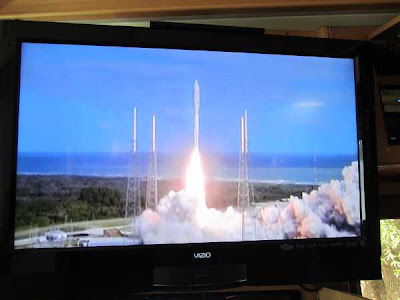 One of the nice things about the fulltime Life is that when Saturday morning comes around, it is just like any other morning. Gone are the days when it meant yard work. Take this morning for example, up early, wrote the Daily Journal, then settled in to watch the launch of the latest rover going to Mars. All week we had been watching programs on NASA TV about the preparations for the launch, which was scheduled for just after 10 AM this morning. And as you can see, this morning I wasn't the only one up to watch the launch, because Linda was as glued to the TV as I was. 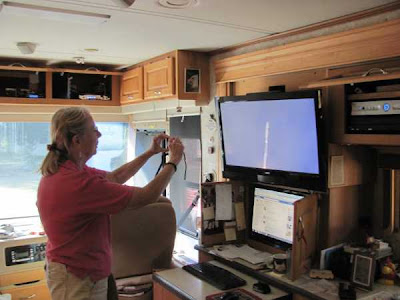 One thing that Linda did was to take photos of the launch, lots and lots of photos. And I guess that was quite reasonable in light of there being 2.5 billion dollars behind what was heading towards space at that moment. The launch was successful, and sometime on August 6, 2012 it will arrive at Mars, and you can bet we will be watching then also. What can I say, some people like to watch NFL games, we like to watch and follow Mars missions. 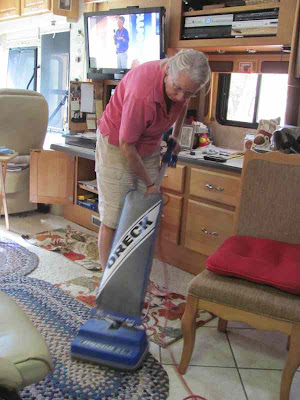 Just wanted to show that watching TV wasn't all we did. I even got into the act, moving my chair so she could sweep under it, which was almost all the exercise we got during the day. Now we did go into town for a little shopping, but that hardly counted as exercise since it was only to get a carton of milk and a few things we needed for the coach at the ACE hardware store. As far as forced marches around the RV park were concerned, there was nothing on the order of yesterday's, just a pleasant after dark stroll over to the dumpster which gave us a chance to see the various Christmas lights some people had out. Looking ahead, it will be interesting to see if the coach physical fitness director has another 30 minutes of walking scheduled for tomorrow, and something tells me she does. But as the song goes, Que sera sera.