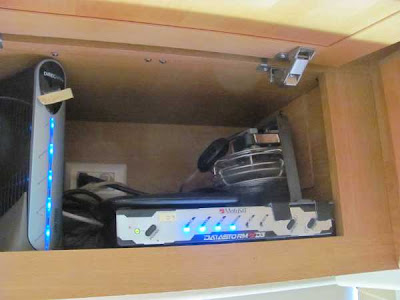 We each went our own way today, Linda doing crafts at the clubhouse, and she will certainly talk about her sewing adventures on her blog. As for me, I was into fixing a few things, one of which was to adjust the MCD shade over the door. A quick Google, a few turns of a knob on the shade, and it was as good as new. Then it was on to replacing the wayward MotoSat fan.

Some time ago, when we had stopped at Pat and Sharon's during our trip across Ohio, Pat had given me a heavy duty fan to replace the one that was going bad. That old fan had finally surpassed the going bad, and had settled firmly into the realm of, is bad. So today it was into the trash with the old and into the cabinet with the new. It took a while to figure out where and how to best mount it, but with a little help from Gorilla Tape, it was soon secured in place and cooling far beyond expectations. It was better than a problem solver, it is problem preventer, and it doesn't get better than that. Thanks, Pat!! 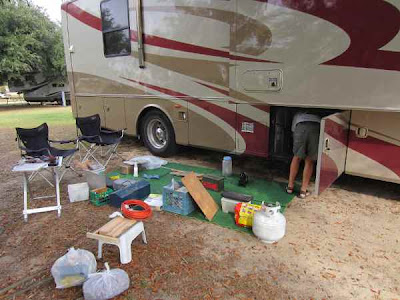 The other job was to clean out and repack one half of one of the bays. Three bags of trash and a number of items for the bargain table at the park later, I was amazed at how much room there was. Fall house keeping, it's been a few years since we have done it, but better late than never. It's really what we are here for, doing some rearranging and cleaning, kicking back and not doing much. Enjoying Life and remembering that: Life is not a dress rehearsal. Don't be afraid to laugh, love and retire early.

Email ThisBlogThis!Share to TwitterShare to FacebookShare to Pinterest
Labels: Alabama