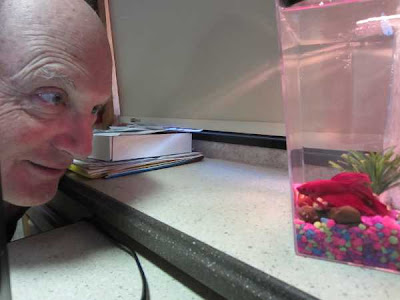 We let others go out and fight the crowds on Black Friday, glad that we bought Red Rob his Christmas present a few days ago as he is really, really enjoying it. Truth be told there are already rumors going around the coach of putting the old tank back into use with something new in it, but they are just that, rumors. RVers get foot disease where they keep wanting another RV just a foot or two longer than the one they currently have. So far we have only been struck by gallon disease once, and for now we want to keep it that way. Maybe Christmas will bring Rob a Betta Exerciser, otherwise known as a mirror. It gives him another Betta he can spare with, but one where he can't get hurt. 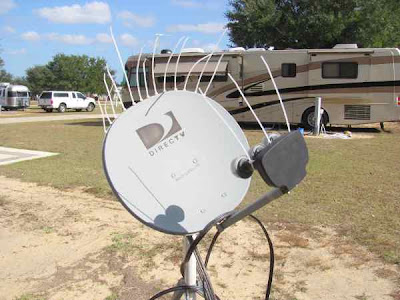 Linda thought this dish satellite dish was intriguingly interesting. I thought it was definitely different. Something tells me that even though we occasionally have bird problems with our satellite dishes, this is not ever going to be considered as a solution. The opportunity to take this photo came during our forced march, the 30 minutes of brisk walking around the park that was decreed by she who ate far less than I did yesterday. It shall be interesting to see if the same regimen is imposed by the family personal trainer tomorrow. 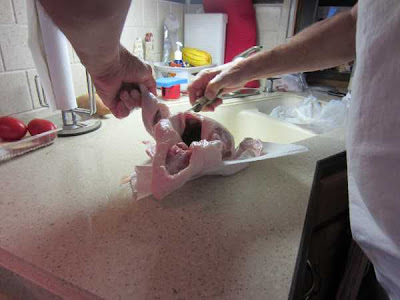 Turkey day was a day when we ate turkey, but we had our own Thanksgiving meal planned for today. Just as last year, our bird was to serve a two fold purpose, providing several fowl meals now, and later the king of meals as far as we are concerned, Cassoulet. That is why the drumsticks and thighs are being removed. While my skills as a butcher may may not be the greatest, my meat hacking is right up there with the worst of them. Doesn't really matter though, since we will pick the duck carcass clean, and the Cassoulet is cooked to the point where all the meat falls off the bone, showing that a good cook can sometimes make up for a bad butcher, at least when Linda's the cook.

In the end, the cooking bag did its job, the duck was way beyond great tasting, and we have a bowl of juices to turn into something else, once we skim off the fat. There was also the requisite dressing, sweet potatoes and Linda's wonderful cranberry sauce she always makes. Great meals two days in a row, and with more to come. Life, for some everyday is the same, for others everyday is an adventure. The choice is ours to make.