The Sock Capital of the Universe 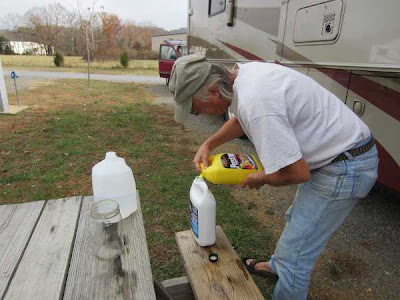 It used to be called antifreeze, at least when I was growing up. Now it is referred to as coolant, and the price is much higher. The Explorer has a tendency to consume quantities of "coolant", and this is my low cost answer to that problem. One can buy premixed 50/50 coolant, or one can buy coolant and distilled water and make their own 50/50 blend. The thrifty part of me comes to the fore here, and between the distilled water and the coolant, the two gallons save us a good bit of money. No real reason to do it other than habit, but as you know, habits die hard. And as long as the Explorer lasts until we can junk it and and buy a new Jeep Wrangler, all will be well. 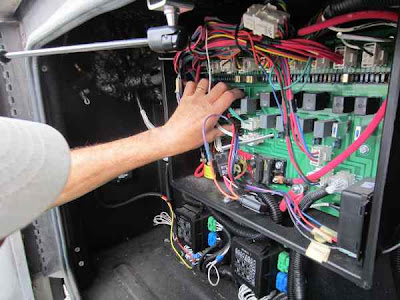 Linda, bless her heart, is an Appalachian hill girl, meaning that she has a different outlook on Life than many people. Maybe I should say it is definitely different than her husband, who is also known as yours truly. She's a do it now, take no prisoners person. I, on the other hand, will get to it someday, and when I do it will get taken care of. The problem is that never shall the twain meet. What you see is prime example of the our differences.

We have had a problem with our System Heat light not coming on during these cold mornings. The System Heat is supposed to proved heat to our bay tanks and prevent them from freezing during temperatures below freezing. We weren't seeing that, and so Linda was prying deep within the bowels of our fuse boxes to see if she could discover why. It wasn't to be, but it was interesting to be pulling fuses and learning that what seems bad does not mean it is bad. 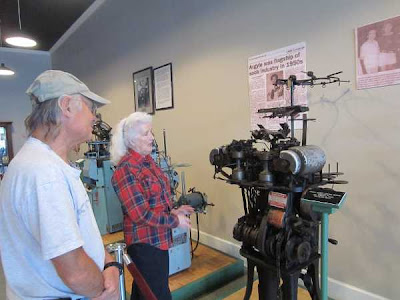 I end it here, in the museum that celebrates the Sock Capital of the Universe. Or at least Fort Payne was that for a certain period of time before our politicians decided that cheap, worthless goods from China were better than quality goods from American factories. This is the Hosiery Museum in Fort Payne, Alabama, and while it is easy to miss it, a stop will open your eyes to what once was and never will be.

For years we have been subjected to incompetently in our leaders, and it isn't something recent, as it goes back decades. It seems like the rewarding of their money donors and the destruction of America is what they seek. Sure, where we are staying was once the heart of the segregated South. It was where Negroes were treated as less than dirt. It doesn't make it right, but at least we didn't have the hatred we have today. The absolute bigotry that masquerades as being politically correct. As much as it pains me, I am not proud of my country. I am not proud of the slime that we have elected. I am for throwing each and every one one of them out and starting all over again, trusting that whatever, and whoever we replace them with, whatever party they may affiliated with, they can't be as bad as what we now have. Each of us has our opinions and that is what makes our country the greatest on earth. We may disagree, but in the end, we will come together for what is best for our country. What more could we ask?